Published in the September 17, 2013 issue of The Edmonton Sun. 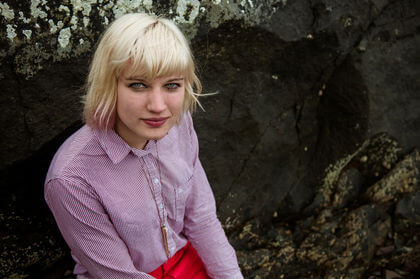 What does it take to be Insta-famous?

For that answer we need look no farther than Carmyn Joy Effa, a local photographer whose Instagram following will blow your mind — at least, it blew mine.

Effa has more than 84,000 followers on Instagram. I’ll give you a moment to let that sink in.

Effa’s following rivals that of most celebrities and major corporations. It’s a jaw-dropping figure and a humbling one for the sweet 26-year-old Edmontonian, who says she is grateful for the Instagram love she’s received.

“I really don’t take it for granted,” she says. “It’s really humbling and cool.”

Effa uses her Instagram as a daily journal. Her photos are beautiful — simple, but stunning.

“Maybe people resonate with that.”

She gained tens of thousands of followers during a few short months last year, when Instagram chose to feature Effa as a “suggested user,” someone who Instagram believes “posts beautiful, original content and brings a unique perspective” to the mobile, photo-sharing community.

During that same time, Effa was listed among top Instagram users to follow on various high profile websites and her photos were also featured on Instagram’s blog.

“While it was happening, it was just crazy,” she says. “I was getting almost one thousand followers a day.”

The social network has grown significantly since it first launched in 2010.

There are now more than 130 million active monthly users with more than one billion ‘likes’ made on photos each day.

Effa says how she uses the app has changed since she gained her huge following.

“It became less of a social thing where I just posted whatever on to,” she says.

“I definitely am deliberate about what I post. I try to think about the flow of my feed.”

So we go back to what it takes to be Insta-famous.

“I had a lucky social media break is really what it comes down to.”

But there are a few best practice tips she’s sharing that might get your Instagram feed noticed.

First, be conscious about lighting. “Natural light is always the best.”

Second, think about composition. “Play around with different camera angles. Take a few shots and think about why one looks better than the other.”

Third, keep it natural. “I don’t think putting three crazy filters on top of a picture is necessarily enhancing it,” Effa says.

Also try not to go overboard with hashtags. And, while she didn’t list this as a tip for Insta-success, I thought it was worth noting that Effa also shares photos of her gorgeous cat Gatsby. It just never hurts to share cat photos.

Follow Effa on Instagram @carmynjoy to get a glimpse of the beauty she sees in daily life.