Published in the October 1, 2013 issue of The Edmonton Sun. 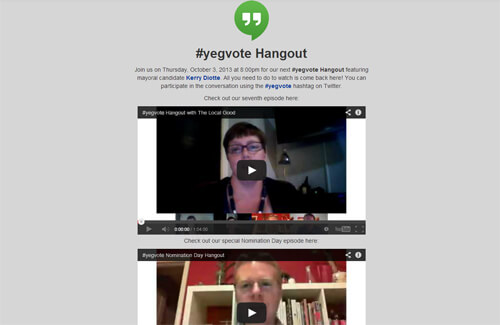 With just a few weeks to go before Election Day, you’ve likely noticed more campaign news coverage, political lawn signs and on the Twitterverse — a whole lot of ‘twibbons.’

In this election race, twibbons are the equivalent of virtual lawn signs.

Twitter users can get their account avatar — the photo associated with their tweets — overlaid with a banner showing which candidate they’re voting for.

It’s just one of the ways social media is being used in the civic election.

Every Thursday since the summer, the trio of passionate political junkies have hosted the Hangouts, aimed at discussing local issues and encouraging election conversation through the #yegvote hashtag on Twitter.

“We could see that there was going to be an interesting election coming up in the fall but there really wasn’t a lot of people talking about it yet,” Cournoyer says.

“The more people who get engaged in the political process or engaged in the election, backing candidates or advocating on a certain issue, the better.”

The three take part in the online broadcast, streaming live using webcams from their homes.

Mayoral candidate Don Iveson has already “hung out” during a past session and the hope is to get all mayoral candidates to participate in a Hangout before Oct. 21.

It’s a smart move on Iveson’s part. Everyone running in this year’s election needs to consider social media when it comes to having a successful campaign.

“Twitter and Facebook are never going to replace door knocking or meeting voters face to face but it’s another way and an increasingly important way for candidates to engage with voters,” Cournoyer says.

“It’s too important to ignore.”

Candidates should also plan on attending political tweet-ups. The election-themed, real-life meet-ups with those who use Twitter are starting to pop up more frequently.

Mayoral candidate Kerry Diotte held his own tweet-up a few weeks ago. Strathcona County’s first politweetup (as they’re known) was held over the weekend and there’s two more planned in Edmonton this week alone.

Watch the election conversation unfold online and join in yourself by using the #yegvote hashtag.

Tune into the #yegvote Hangouts with Cournoyer, Hastman and Male every Thursday leading up to Election Day at www.edmontonpolitics.com.

And for candidates who do decide to delve into the exciting and sometimes scary world of social media, don’t be afraid to ask for help. It can be intimidating and there are a ton of trolls, but when you get past that and start to engage with the community and your constituents, it will be so rewarding.

This is my last column with the Sun. It has been a pleasure sharing stories of how Edmontonians are using social media to do unique and interesting things. I hope reading those stories has inspired you to dabble into social media or find new ways to use it. Feel free to follow and tweet me at twitter.com/lindork and find social media stories and more on my blog at www.linda-hoang.com.

Linda Hoang is a Canadian blogger based in Edmonton, Alberta, who writes about travel, food, lifestyle and pet topics. She's also a seasoned social media/digital strategist with a journalism background, the founder of the Edmonton International Cat Festival and co-founder of Stop Race Based Hate, an online anti-racism education tool. Linda loves exploring the world with her partner Mike, eating their way through cities, supporting local businesses, and photographing Instagrammable Walls. Linda is a fur-mom to two cats and two dogs.
PrevPreviousSocial Media Column: Social experiment #5k365 a success
NextGiveaway: Tickets to the 2013 Edmonton Comedy Festival!Next