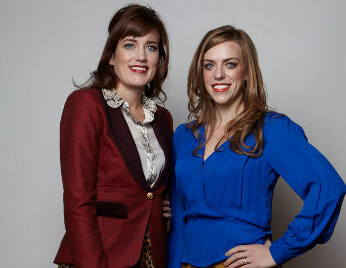 If ever there were an Edmonton crowdfunding success story, Poppy Barley would be it.

“Shoe shopping is not easy for women and they want another option. We want to be able to have something that fits us well and we don’t want to compromise,” says Kendall Barber, (@KendallBarber) who runs Poppy Barley (@PoppyBarley) with sister Justine (@JustBarber).

Like most young businesses, the duo faced the challenge of cash flow, and how to raise money to develop their products and grow their company.

That’s where Alberta BoostR comes in. The website is a super local, business-oriented version of Kickstarter and Indiegogo, acting as a platform for businesses to ask for financial boosts while offering incentives in return.

Poppy Barley was one of the first Edmonton businesses to sign on to Alberta BoostR (@AlbertaBoostR), asking for $10,000 to help launch their fall/winter Heeled Boots Collection.

“We really didn’t have a lot of expectations and then to watch the momentum behind it was really cool,” Barber says.

“When people believe in your idea and what you’re doing and support it, it’s incredible. It’s really hard to express the feeling of how much that means.”

Crowdfunding has become a powerful way to engage consumers and launch projects off the ground.

“Definitely for startup companies, it kind of accomplishes the things you stress out about the most, which is customer acquisition, the validation of your idea, and cash,” Barber says.

If you want to find success in crowdfunding, be very transparent about what the money will be used for and most importantly, have a really unique idea.

“We spent a lot of time looking at other crowdfunding campaigns on other platforms that had been really successful and usually the ones that did well were ones that were really trying to create something new.”

Our community can be fiercely supportive and passionate when it comes to different projects and events. Will other local crowdfunding campaigns find the same success as Poppy Barley?

The company’s funding totals currently blow every other project out of the water, but it comes down to the idea (women really love their shoes).

But anything is possible and I’m curious to see which local projects do take off through crowdfunding.

With their newfound seed money, the Barber sisters have already put their heeled boots production into action and plan to launch the collection in a few months.

Congratulations Poppy Barley! It will be great to see how you grow in the next few years.

Head to Alberta BoostR (www.albertaboostr.ca) and check out the other local projects that are asking for your support.

Linda Hoang is a Canadian blogger based in Edmonton, Alberta, who writes about travel, food lifestyle and pet topics. She's also a seasoned social media/digital strategist with a journalism background. Linda loves exploring the world with her husband Mike, eating their way through cities, supporting local businesses, and photographing Instagrammable Walls. She is the founder of the Edmonton International Cat Festival and a fur-mom to two cats and two dogs.
PrevPrevioustechlife magazine: Mithalee Rawat explains the art of the pop-up restaurant
NextWhy the Capital Region Rocks (#CapRegionRocks)Next