So our IVF failed and the world is on fire, what do we do next?

And the world is sort of on fire right now.

This blog post update lets you know what we’re planning to do next in our infertility journey. 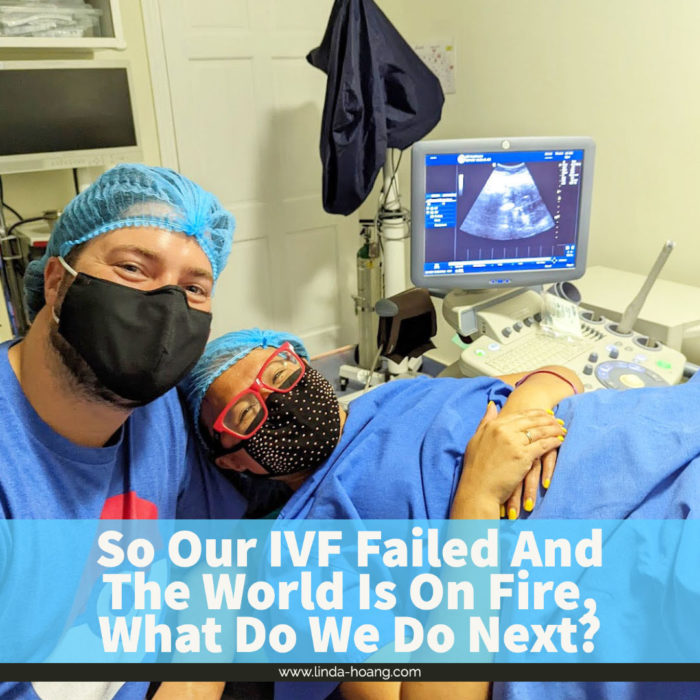 People can change a lot in… a year, two years, five years, almost a decade. That’s not a bad thing. Generally, I think you become more… you, with age. You have more life experience. There is more resolve and perhaps certainty in your views and actions. Things around you change as well, which of course plays a role in your change.

Why am I starting this update on our infertility journey talking about how people and circumstances change?

Well, what we couldn’t have imagined thinking nearly a decade ago when we started trying to have kids—the moment we’d no longer want to have kids anymore—appears to have arrived.

I don’t know if “giving up” is the right term for what we’re feeling these days.

It’s just that enough time has passed, certainly enough failed attempts to conceive have passed, enough tears have dropped, enough heart break has occurred, but really just enough time without kids has passed that we’re no longer sure if kids will be part of our life story.

We’re happy with our life—not to say that we weren’t happy with life during any of the last eight years trying to conceive—but now that we’ve become very accustomed to life without kids, we can say honestly that we don’t feel as sad anymore about not having any.

Certainly global issues are at play here too. While I acknowledge that we are happy and life is good for us personally, we are also very aware that the world is in crisis and the future is so uncertain.

There’s a climate emergency that’s only going to create more severe climate events—disastrous ones—over the next decade. We’re in the the third year of a global pandemic that has highlighted vast economic, political and social inequities and resulted in extreme disappointment in the selfishness and humanity of those among us. World War 3, at least at the time of writing this post, feels like it’s imminent. Hateful groups are mobilizing and becoming more emboldened in increasingly public and scary ways. Living is getting more expensive, supply chains are disrupted, resources are depleting, the social media algorithms and fake news is out of control, and this stage of capitalism generally feels gross. Many aspects of society feel like it’s falling apart.

Again, acknowledging how grateful and lucky we are to have good lives in spite of all of the terrible things happening in our communities and around the world, it still begs the question:

Do we really want to bring a child into this? *gestures at the world*

As much as we hoped our Procreation Vacation (IVF Abroad) in Barbados last December 2021 would be successful, for whatever reason, the two embryos they put inside me didn’t turn into a baby. Our attempt at IVF—after years of attempts to conceive—failed.

It was yet another heartbreak after years of heartbreak. We cried, hard.

And then we were okay. Sort of.

We don’t regret doing IVF abroad at all—in fact we are still so happy with our decision to turn the IVF procedure into a vacation, because despite the failed attempt to conceive—yet again—we at least got to have an amazing getaway to somewhere we’d never been before, creating memories that will last our lifetime.

So, why didn’t the IVF work?

And will we try again?

Our doctor said a few things can go wrong after embryos are transferred in an IVF procedure.

1 – The uterus could be inhospitable, the endometrium lining could be too thin, but we were told my lining developed “beautifully” and there were no flags or concerns in regards to the uterus. Our doctor did not think the uterus was the problem.

2- The embryos may not—for whatever reason—have continued to develop once inside me. At Day 5 of our embryo transfer, none of the four remaining, viable embryos we had, had reached blastocyst stage. Embryos do often continue to develop and turn into blastocysts once transferred into the uterus, so our doctor said perhaps our embryos did not continue to develop after transfer. A possible cause for the IVF failure.

3 – Or, my body could have rejected the embryo. Our doctor said that maybe my body did not let the embryo implant despite my uterus conditions looking good, and despite embryo development looking positive. This can happen.

Of course we will never know what actually happened in my body.

Technically, I was pregnant for a short period of time. That our egg and sperm were able to fertilize and develop as they had in the lab as part of the IVF process was really positive, according to our doctor. Our stuff CAN combine and I CAN get pregnant, they just need that extra support (and it just might not stick).

While the two embryos they transferred into me failed, we were informed that the OTHER two viable embryos we got out of the IVF process, the two that weren’t placed in me for the procedure, DID develop into blastocysts and were frozen in case Mike and I want to proceed with a second try at IVF using the frozen embryos.

We thought it sounded about right with our infertility record that the two embryos they didn’t choose to transfer were the ones that ended up developing nicely lol. I mean, we don’t know if the ones they transferred didn’t also develop nicely but it just kind of felt like a, oh of course the two that didn’t get placed ended up being ideal lol.

All of this to say, the update is: We have one more shot at conceiving with frozen embryos and we are going to take it, but we’re taking it with mixed feelings.

We do feel a bit conflicted with how to move forward in this now. As I’ve mentioned, we’ve gotten to a point where we can see life without kids and it’s not so sad anymore. In some ways we think it would be better. We’ve also felt a bit of bleakness with the current state of the world and what that might mean for our kid’s future.

You could argue that there’s never a “good time” to have a kid, of course, and that may be true.

But for us, if we didn’t have any other embryos, we wouldn’t try again.

We’ve gotten to that point.

Again, I don’t know if “giving up” is the right term for this feeling. Because in a way, it’s not giving up if our feelings about it have changed?

Don’t get me wrong, I still think Mike would be The Most Amazing Dad. Period. (He’s already an amazing dad to our fur kids). But where it literally used to hurt my heart to think about how unfair it is that Mike doesn’t get to be a dad, that I don’t get to be a mom, these days it doesn’t hurt so much. It’s sad, but it’s not sad.

So, now in Year 8 of Trying to Conceive, Mike and I will be returning to Barbados later this year (2022) to do another IVF treatment, but this time via frozen embryo transfer.

As it turns out, a frozen IVF transfer is a significantly more affordable and less intensive process than a normal IVF treatment (fresh transfer) is.

If we wanted to, I could just fly in, do the procedure, and fly out!

With frozen embryo transfers, Mike’s work is already done lol, so it can be that quick, however why wouldn’t we make it another Procreation Vacation? A shorter trip this time compared to last time, but we are still looking forward to the getaway and an opportunity to make more memories—even if the frozen embryo transfer IVF does not work.

I’ll be doing my best to “relax” before then.

Mental and physical health can play such a role in fertility health, and improving your fertility chances, so I’m grateful to continue working with Park Integrative Health as a brand ambassador to force regular relaxation (acupuncture and massage treatments) into my life. Literally would not do self care if it wasn’t forced upon me lol. I did a month of (gifted) treatments with acupuncturist extraordinary Ashley Chisholm before our IVF procedure in Dec 2021 and can’t express how nice it felt (she does both acupuncture and cupping). Hoping making mind and body feel better earlier ahead of this next IVF procedure will make a difference.

And in the meantime, Mike and I—as we have been doing over the last eight years—are just going to keep living our life. As I’ve said, it’s a good and happy life.

And while we would love to have kids, we don’t feel like we need or want to have kids anymore.

Sometimes it takes people many more years struggling with infertility to get to the point we’re at. Sometimes people never change their minds and will always want kids. I don’t think there’s a right or wrong. I don’t think it’s bad if people’s perspective on something like this changes, or doesn’t.

If this last attempt for us, this frozen embryo transfer doesn’t work, our hearts will break again.

But we will be okay.

I want to thank each and everyone of you who have followed our infertility journey over these many years, or those who recently came upon our story when we shared about our IVF Abroad / Procreation Vacation. Thank you to those who shared kind messages, and thank you to those who have simply kept us in your thoughts.

I absolutely believe infertility should not be a shameful subject, and that we should normalize these conversations.

And everyone—regardless of if they’re affected or not—can benefit from a bit more understanding and compassion for those who do struggle.

I just wish everyone who wanted to have children could—that this didn’t need to be a struggle.

If you’d like to read more about our infertility journey, I’ve blogged it throughout the years:

Until the next update!

Diagnosed With Asymptomatic Endometriosis After Years Of Unexplained Infertility

So What Do We Do When Our Adoption Agency Suddenly Closes?

Six Years Trying To Conceive: Our Infertility And Adoption Update

Linda Hoang is a Canadian blogger based in Edmonton, Alberta, who writes about travel, food lifestyle and pet topics. She's also a seasoned social media/digital strategist with a journalism background. Linda loves exploring the world with her husband Mike, eating their way through cities, supporting local businesses, and photographing Instagrammable Walls. She is the founder of the Edmonton International Cat Festival and a fur-mom to two cats and two dogs.
PrevPreviousLindork’s Lists – Q&A #22: Emily Chu
NextVideo Blog: Lindork Does Life – Ep. 24 – Snowmobiling the Columbia Valley (B.C.)Next