Mike and I didn’t want to spend too much money on too many shows while we were in Las Vegas because it would have just been too much for our budget, but there was one show we knew we definitely wanted to see: the Tournament of Kings at the Excalibur! 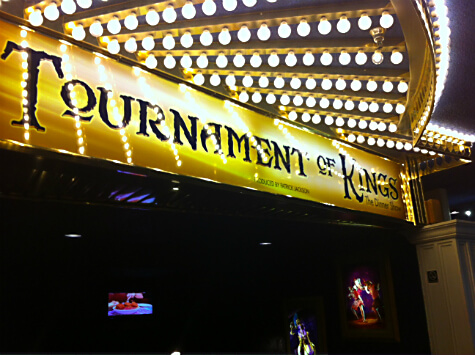 Tournament of Kings at Excalibur

Yes it’s no gravity-defying, stunning Cirque show but Mike really loves medieval stuff and had even wanted to stay at the Excalibur (but I ended up choosing the Luxor.) 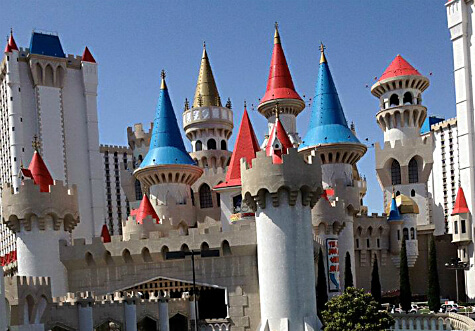 I was interested in seeing the show because it definitely cost less than a lot of the other options and there was a dinner aspect to it! It would normally have cost around $60 a ticket for the dinner and show but we ended up getting tickets for $47 each at the Tix4Tonight discount booth, which I think is a great deal. 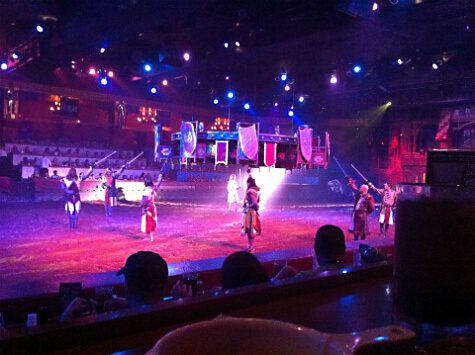 The Knights of the Round Table (Tournament of Kings)

The “arena” was divided into different countries. We were seated in the Russia section. That meant we were encouraged to cheer for the Russian King, which was no problem because I thought he was the most fun out of all the Kings! :) 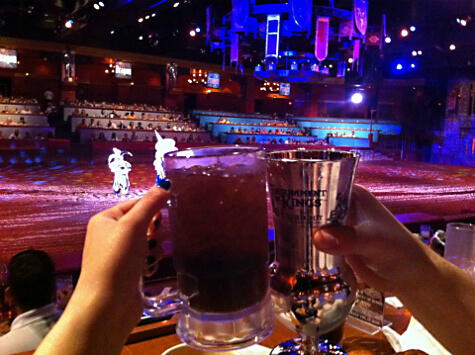 The show was excellent! It was extremely interactive and really fun. The commentators encourage you to cheer for your King, boo the rest, stamp your hands on the table and raise your glasses for toasts. There was singing and dancing, sword fighting and horseplay. The jousting was cool and the choreographed fight scenes were very believable! There was loud music, sound effects, a light/fire show and I also loved the medieval costumes. I was also surprised at how much everyone in the audience got into it. We were all clapping and toasting and yelling “HUZZAH!” whenever the commentator told us to (great audience participation!!) Even the older couple next to us were cheering louder for Russia than we were! 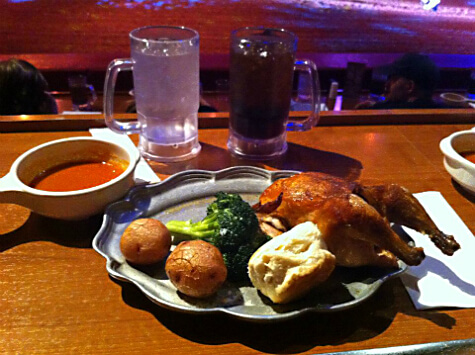 Feast fit for a King (or Queen!) at Tournament of Kings

Our dinner was themed to be like a hands-on medieval feast (fit for a King or Queen!) It consisted of tomato soup (or ‘Dragon’s Blood’), some potatoes, a piece of broccoli and a whole chicken. You’re also given “tankards” (jug-like cups) for your drink and you also have the option of ordering a drink that comes in a special souvenir goblet. The food was okay but really nothing spectacular. I would definitely advise saving some of your soup because the rest of the meal is actually pretty bland and I ended up dipping everything in the soup to give it more flavour. The soup was actually probably the best tasting part of the meal. You’re also given a blah looking and tasting dessert at the end. 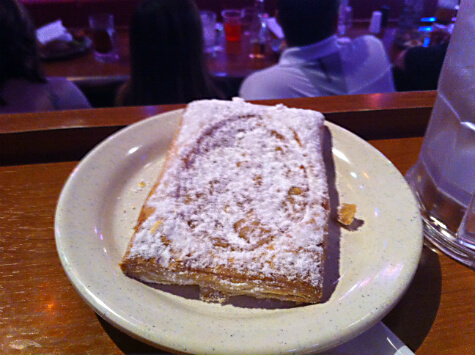 Sad dessert at Tournament of Kings

I would absolutely recommend you go see Tournament of Kings when you’re in Vegas. You won’t be very impressed with the food but you’ll have a blast watching/taking part in the show. The fact that the food is themed does add to the overall medieval authenticity factor of the show too though so don’t skip out on the food completely (not even sure if you have that option to do so). But considering we got dinner and a show for the same price we would of we had just gone to an expensive dinner, there’s definitely bang for your buck value in going to see Tournament of Kings. 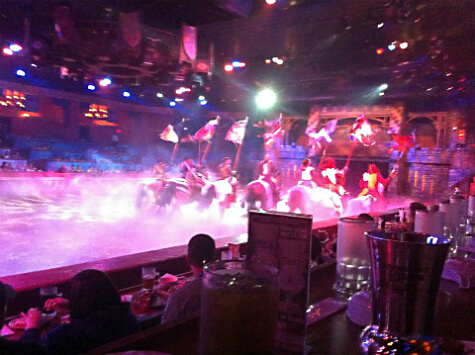 Tournament of Kings at Excalibur

The Tournament of Kings is a very well done show that shouldn’t be overlooked by all the fancy acrobatic Cirque shows available to you in Vegas. It’s affordable and fun and we were laughing and enjoying ourselves the whole night! It’s an over the top, super interactive spectacle that’s absolutely entertaining, a definite must see if you’re going to Vegas with kids (but personally I don’t think I’d want to take my kids to Vegas for a vacation) but I think it’s enjoyable no matter how old you are.

So have you been to the Tournament of Kings?! Did you like it??

Linda Hoang is a Canadian blogger based in Edmonton, Alberta, who writes about travel, food lifestyle and pet topics. She's also a seasoned social media/digital strategist with a journalism background. Linda loves exploring the world with her husband Mike, eating their way through cities, supporting local businesses, and photographing Instagrammable Walls. She is the founder of the Edmonton International Cat Festival and a fur-mom to two cats and two dogs.
PrevPreviousClicks of the Day: Thursday, May 3, 2012 Edition!
NextPhoto of the Day: Saturday, May 5, 2012Next