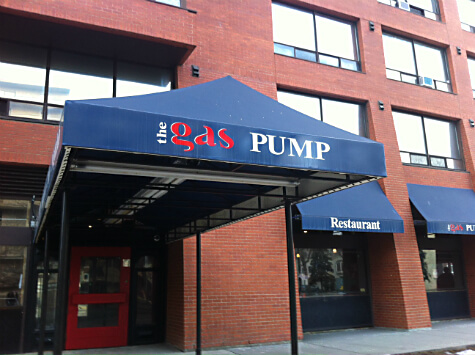 Mike and I went to The Gas Pump (at 10166 114 Street) recently with our friends Denise and Tony. We had actually almost been to The Gas Pump once before because Mike’s good friend Logan’s cousin owns it (new owner). The reason why we backed out last time was because we kind of thought the place was a bit sketchy. Logan assured us the sketchiness was a thing of the past. If you check out their website, they boast a “new look” and “new management” so they’re also trying to be rid of whatever sketchiness once plagued it. Denise and Tony had a gift card to The Gas Pump though and said they’d tried wings there before that had been really good, so that’s the main reason why we figured we’d give it a shot! 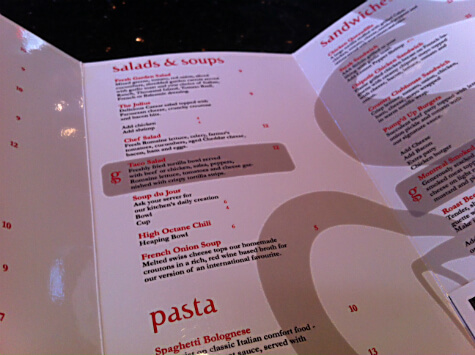 Menu at The Gas Pump.

I forgot to take a photo of the inside of The Gas Pump but it’s a huge space. Tons of tables, booths, a dance floor and the bar area. It did look and feel a little sketchy going into it and it took awhile for someone to acknowledge that we had sat down, but once they did the experience started getting better. The menu looked really nice and there was quite a bit of your typical pub fare to choose from. 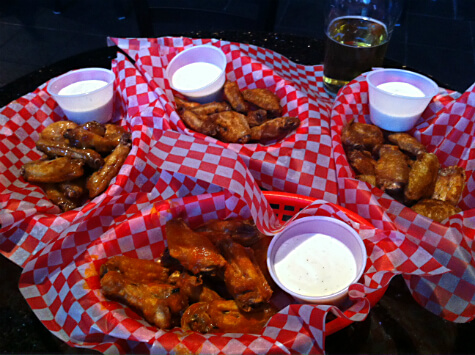 Chicken Wings at The Gas Pump.

They were offering 20 cent wings that day (if I can remember correctly I think they offer that special most days) and the wings came highly recommended from Tony and Denise. We ordered a few different flavours (salt and pepper, hot, cajun, I think sweet BBQ). They were pretty big wings, full of flavour, and each basket came loaded with ranch, a point that Tony and Mike especially liked. Great bang for your buck at 20 cents a piece! 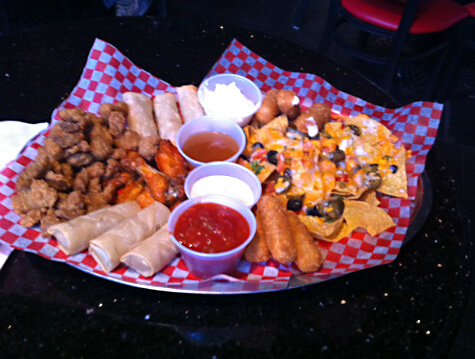 Party Platter at The Gas Pump.

We also tried the ‘Pump’d Up Party Platter’ which included dry ribs, popcorn chicken, spring rolls, nachos, mozzarella cheese sticks and more wings. The chicken, ribs, wings and mozzarella sticks were soooo good. The sticks literally exploded with cheese as soon as you bit into it. The nachos were average and the spring rolls weren’t great at all, though I wasn’t expecting them to have spectacular spring rolls. 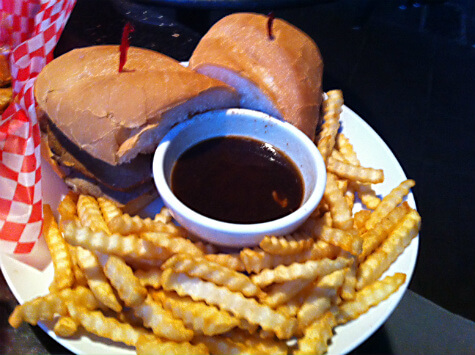 Beef Dip with Fries at The Gas Pump.

Mike also ordered the Roast Beef Dip (shaved beef on a French baguetta with a side of homemade Au Jus and a side of fries). He loved it.

Basically we were all left stuffed and completely satisfied. The Gas Pump proves that you shouldn’t judge a book by its cover because while it didn’t look like the greatest experience was to be had there, we did end up having a good time. I can’t say the crowd or the music is really my thing (though we went earlier in the evening so we didn’t really experience the ‘nightclub’ part of the place but it definitely gave off a more older crowd vibe).

Apparently The Gas Pump has been around since 1976 and according to their website, Wayne Gretzky used to hang out there a lot. Some pretty cool history and kudos to it for chugging along this many years after it first opened. There’s always something about a local institution that’s still doing what it can to stick around and be successful. I hope the new management and new look gives it that continued success. I probably won’t be back too many times in the future. The food was good but it just didn’t pop out as a regular place for me to visit – especially with so many other wonderful restaurants and pubs in the city. But I do suggest you give it a try! And if you used to frequent it back in the day like Gretzky, maybe it’d be worth revisiting now.

So have you been to The Gas Pump? (Back in the day? Recently?)

What did you think??

Linda Hoang is a Canadian blogger based in Edmonton, Alberta, who writes about travel, food lifestyle and pet topics. She's also a seasoned social media/digital strategist with a journalism background. Linda loves exploring the world with her husband Mike, eating their way through cities, supporting local businesses, and photographing Instagrammable Walls. She is the founder of the Edmonton International Cat Festival and a fur-mom to two cats and two dogs.
PrevPreviousNew Layout!
NextClicks of the Day: April 6, 7, 8 2012 Weekend Edition!Next