This week I heard (through my friend Diane who found out from Long Thach in the Alberta Food Connections Facebook Group) that there was a new gourmet hot dog place in town! 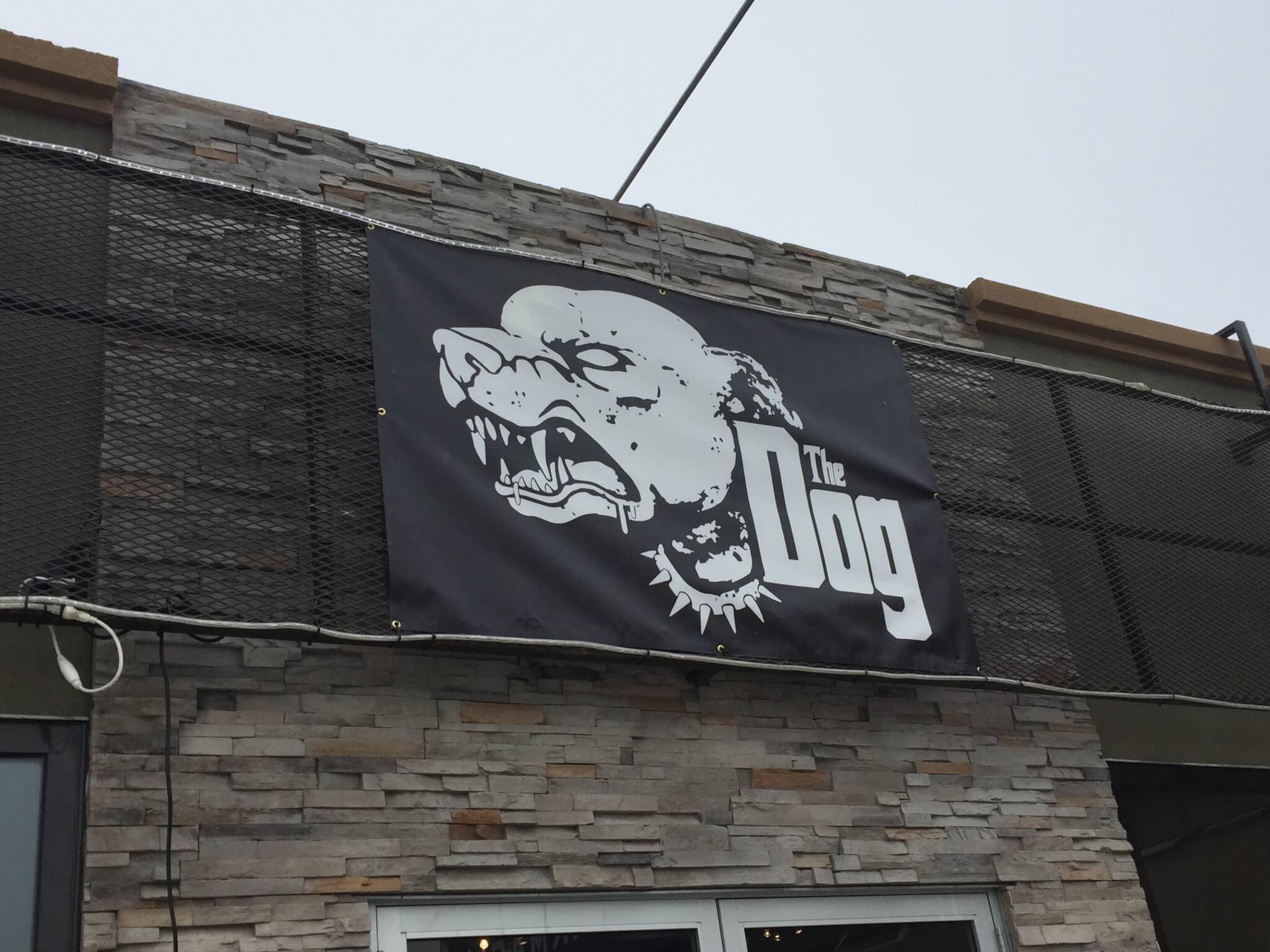 “The Dog” at 9567 118 Ave. replaces what used to be Absolutely Edibles on 118 Avenue and 95 Street. The location is super close to NAIT so I had actually been to Absolutely Edibles a few times over the past year and some for lunch dates – I always liked their food (check out my old review here). 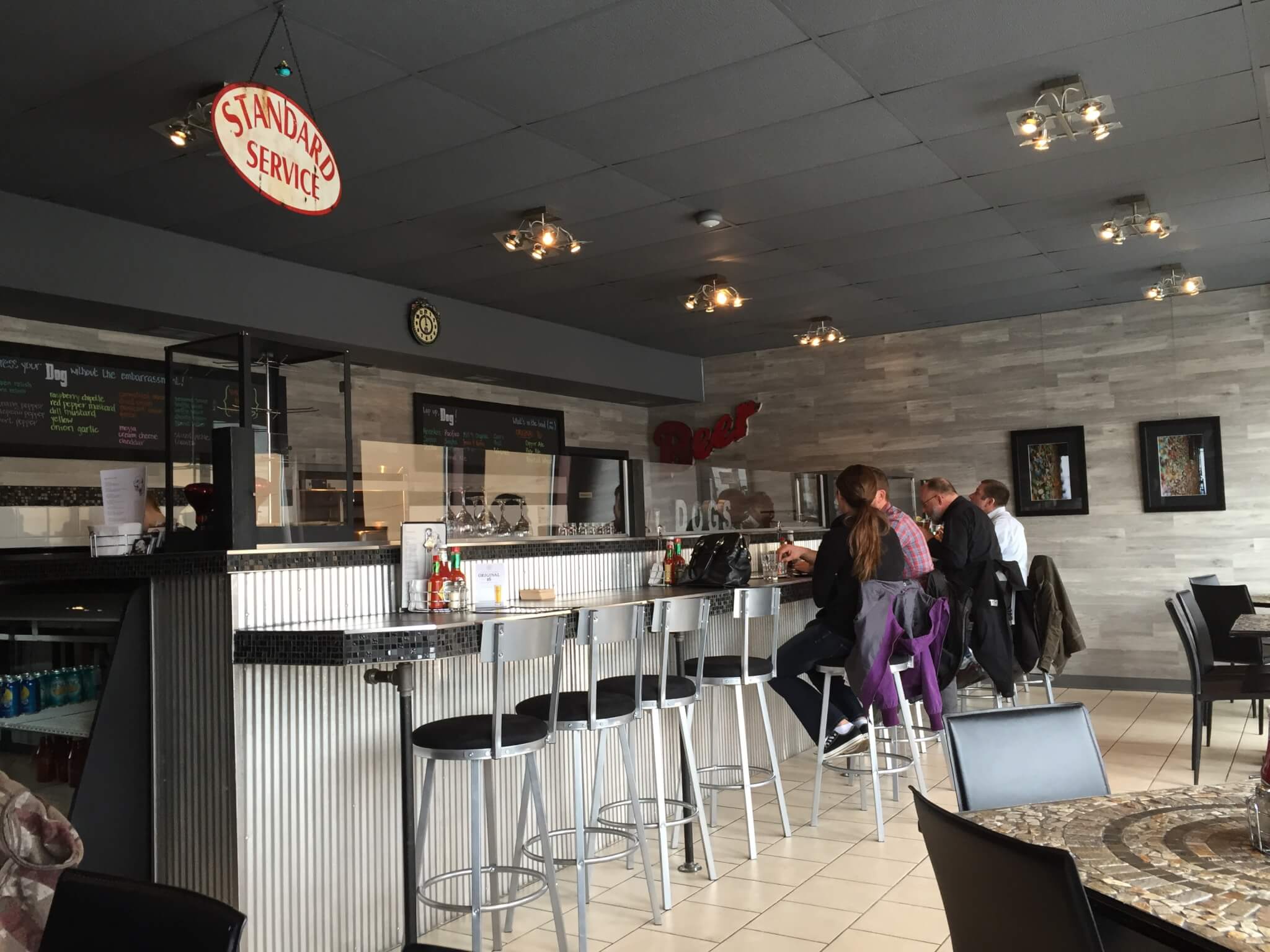 Turns out The Dog is run by the same people behind Absolutely Edibles and Sloppy Hoggs (which is just a building over from The Dog).

Absolutely Edibles had been a sit-down restaurant but when I heard of The Dog I was – for some reason – expecting just a stand, order and leave place. Not so! The interior is much different than what it used to be. They’ve got a nice diner-esque look, with a sleek rock wall and lots of greys, whites and black tones. It’s got a very clean and uncluttered feel to it. (They kept the tables from Absolutely Edibles! Great tables). 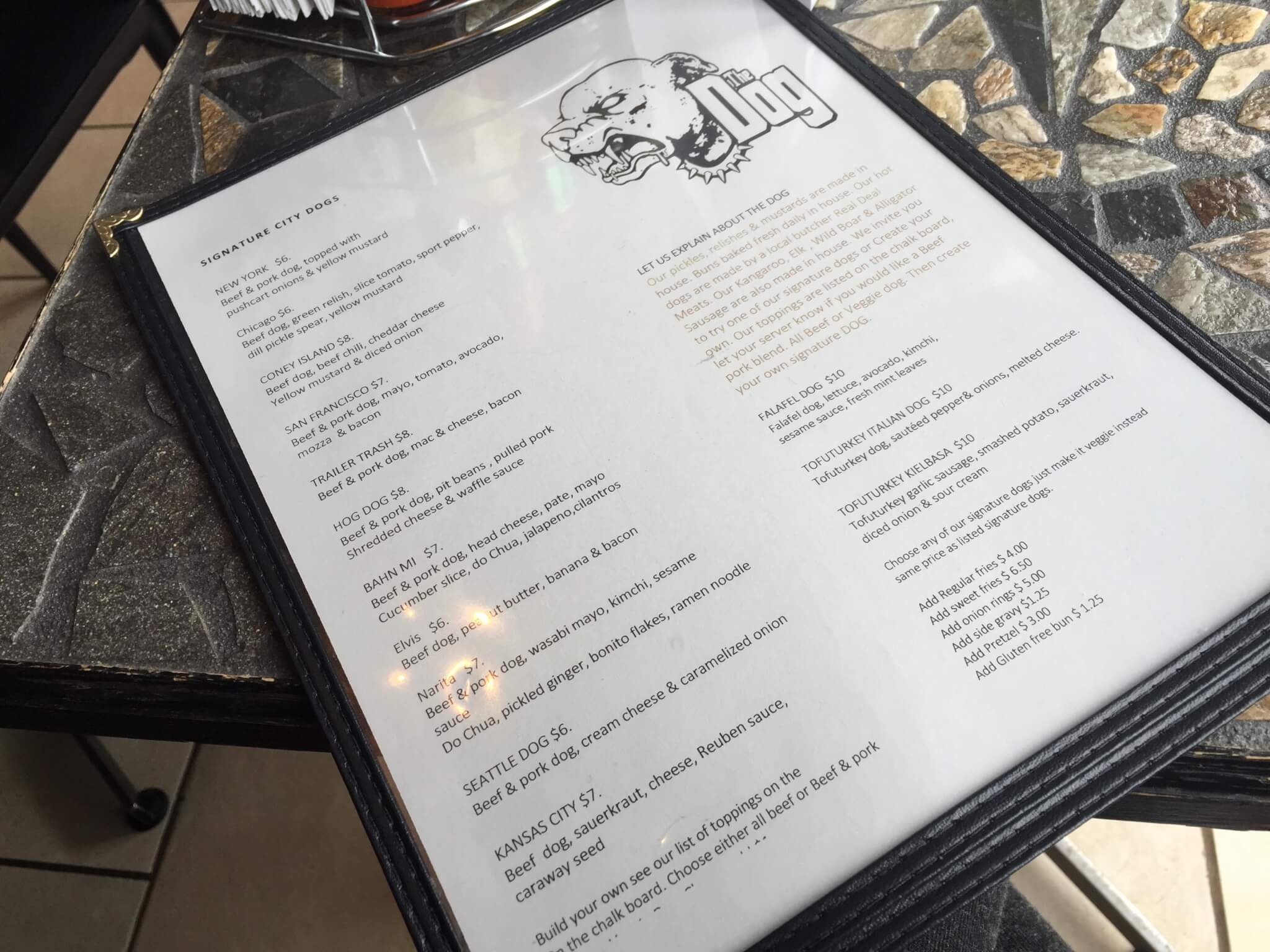 Pretty varied menu at The Dog!

The Dog opened last week, not long after ‘IT Dog’ opened in the south side. (Are gourmet hot dogs the next kale?) It offers a pretty big variety of gourmet dogs to choose from – including exotic animal sausage dogs (kangaroo, alligator, elk, to name a few) as well as some Asian-inspired ones (a Vietnamese banh mi dog, a Japanese ramen dog), and some other ‘safer’ but still not your average – dogs.

Diane and I planned to go try it for lunch and it ended up being a bigger lunch with our food friends Andrea, Cindy, Lesley and Addie (we also saw our friend Kim there trying it too! Small world).

The prices at The Dog range from about $7 up to $12 (for the exotic sausages – which by the way are all prepared in house) and since there was a big group of us we were able to try quite a bit. 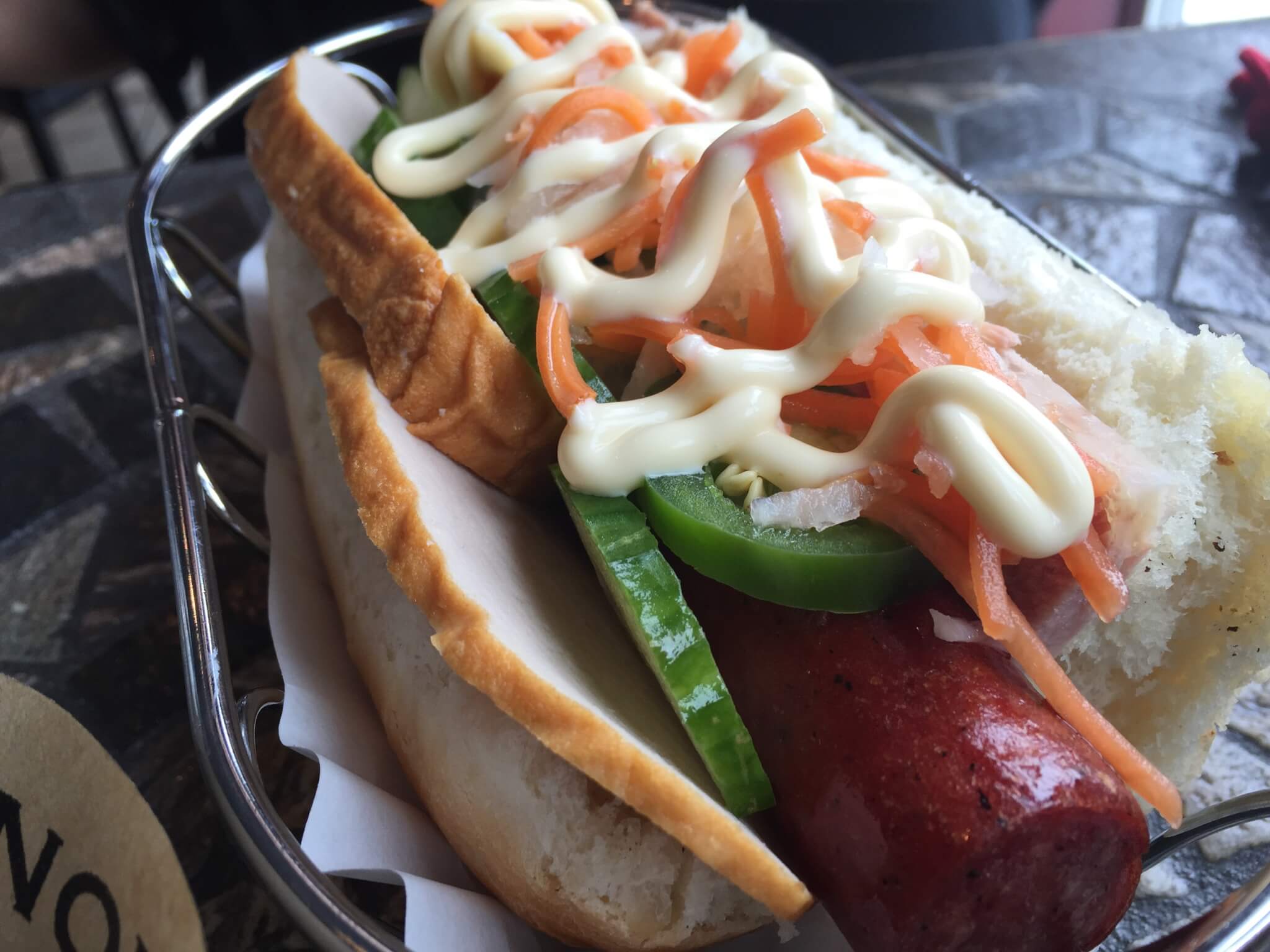 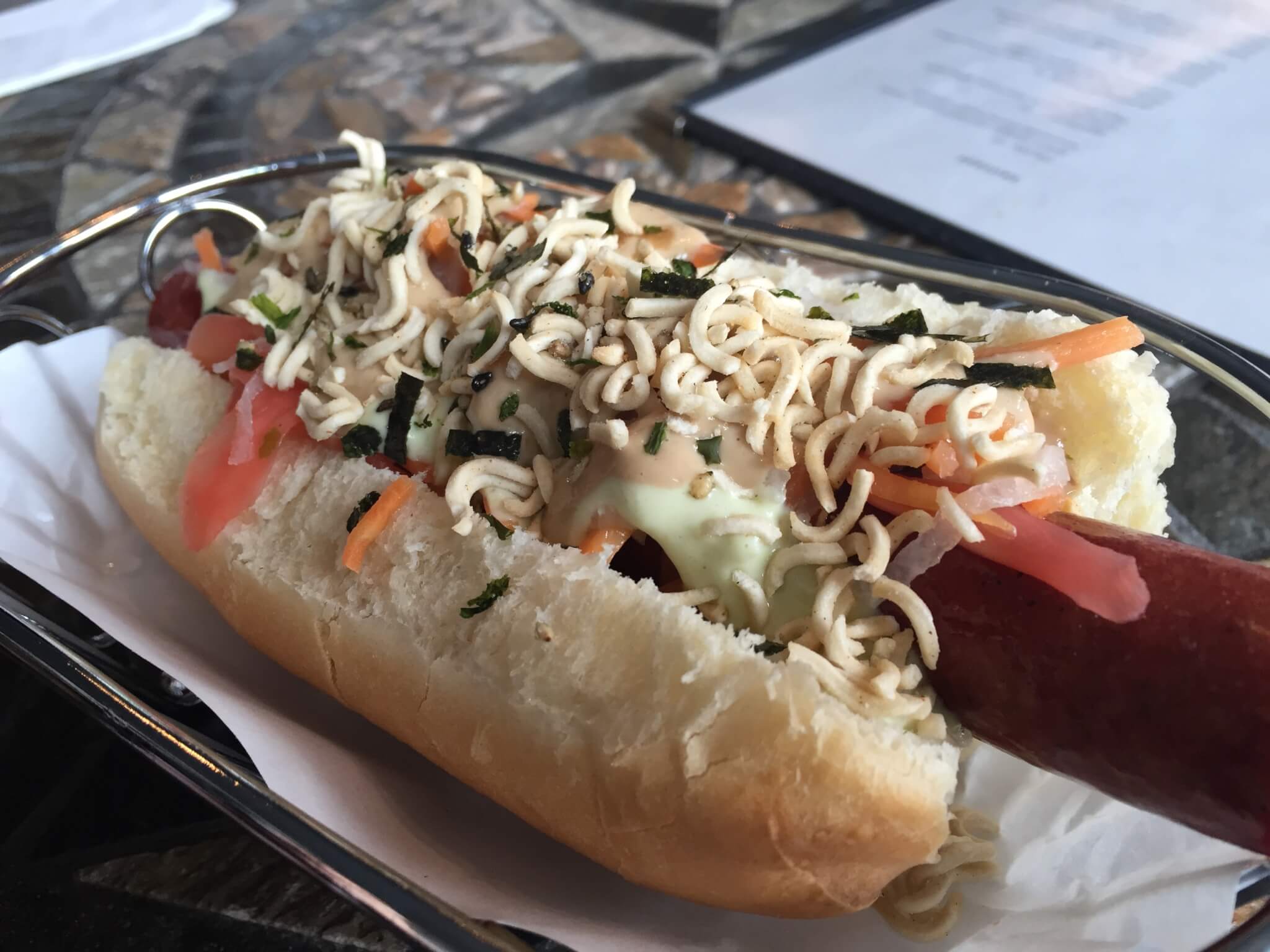 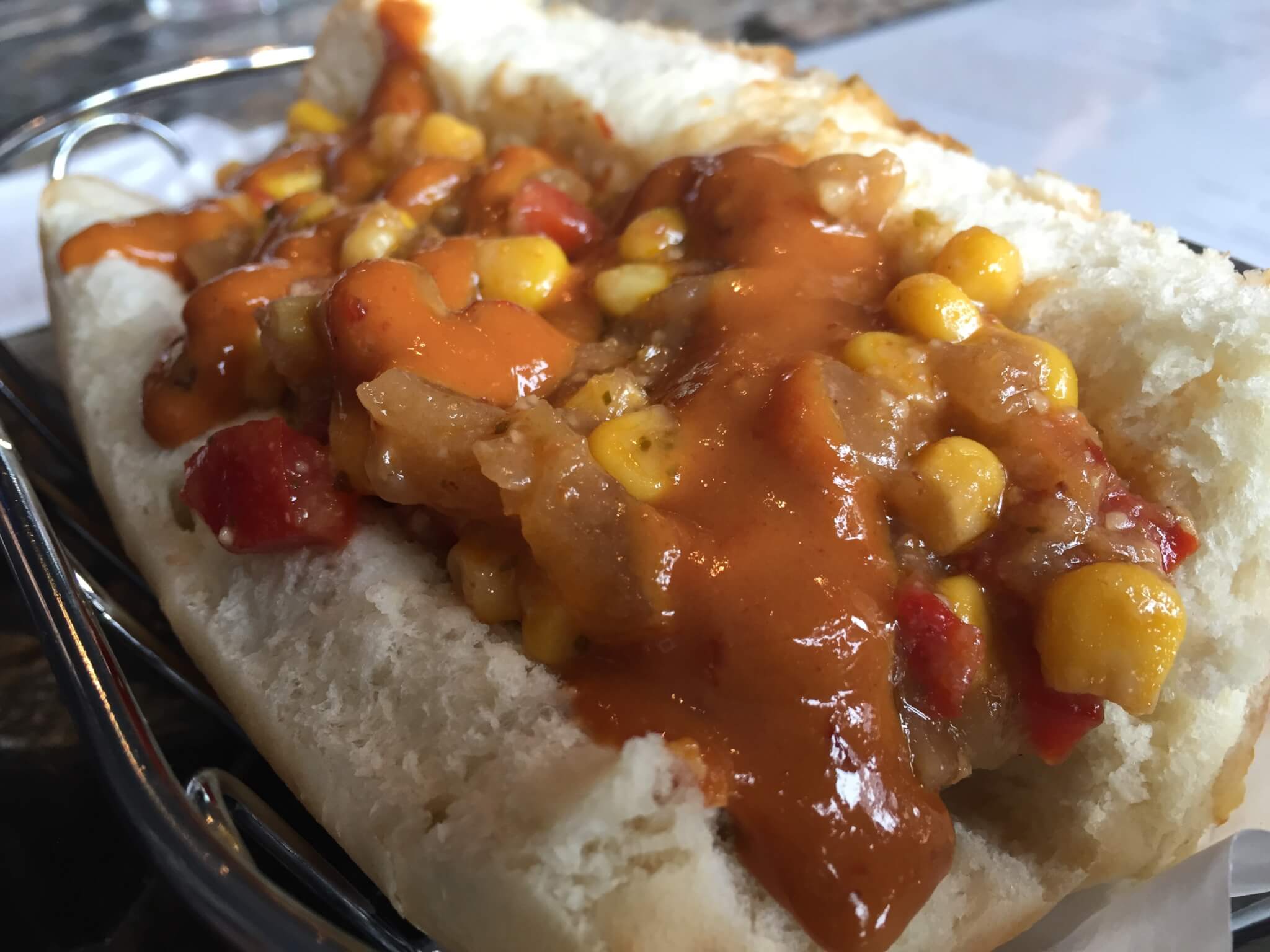 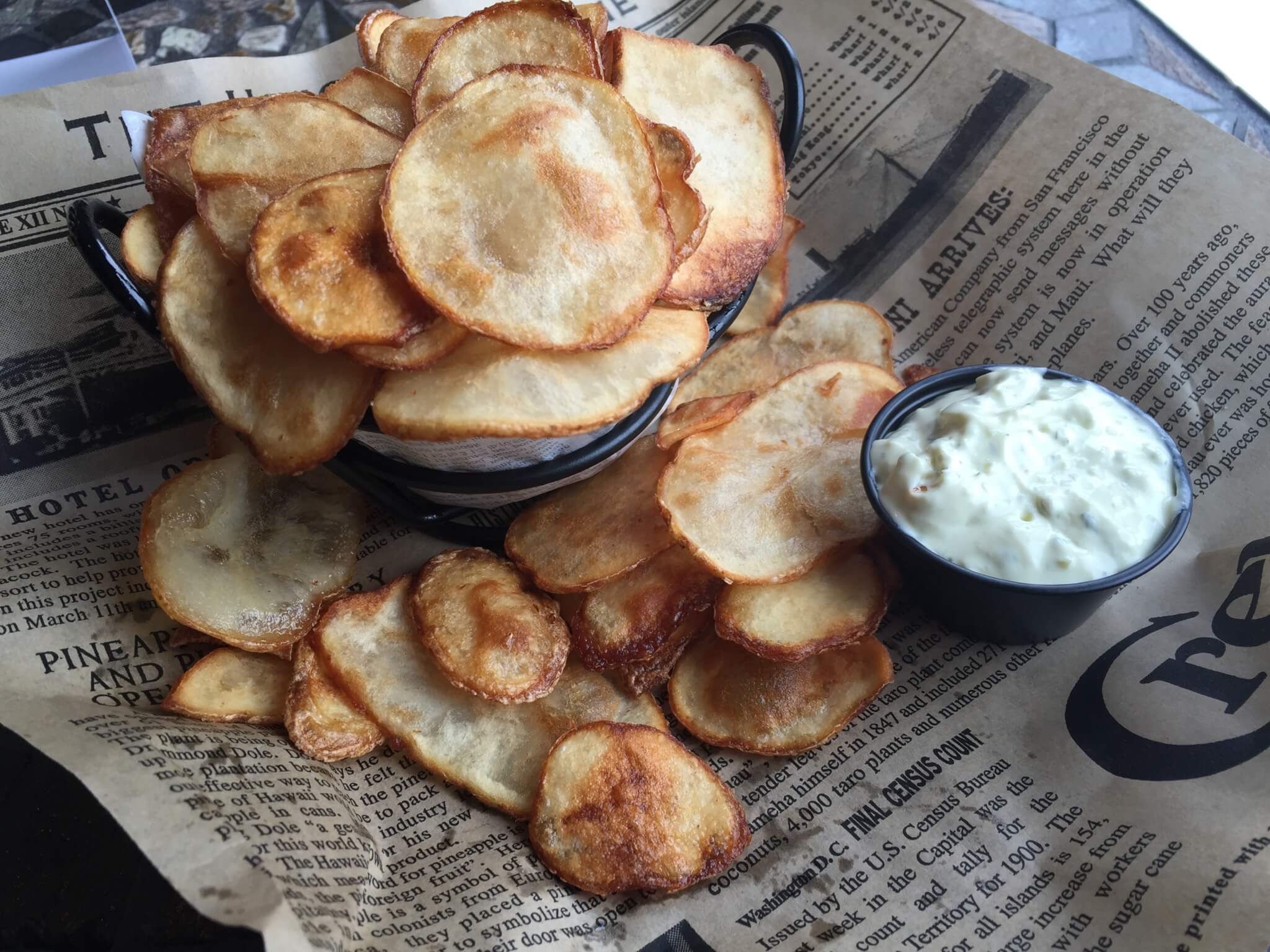 Crispy housemade chips with dill pickle dip ($6) at The Dog 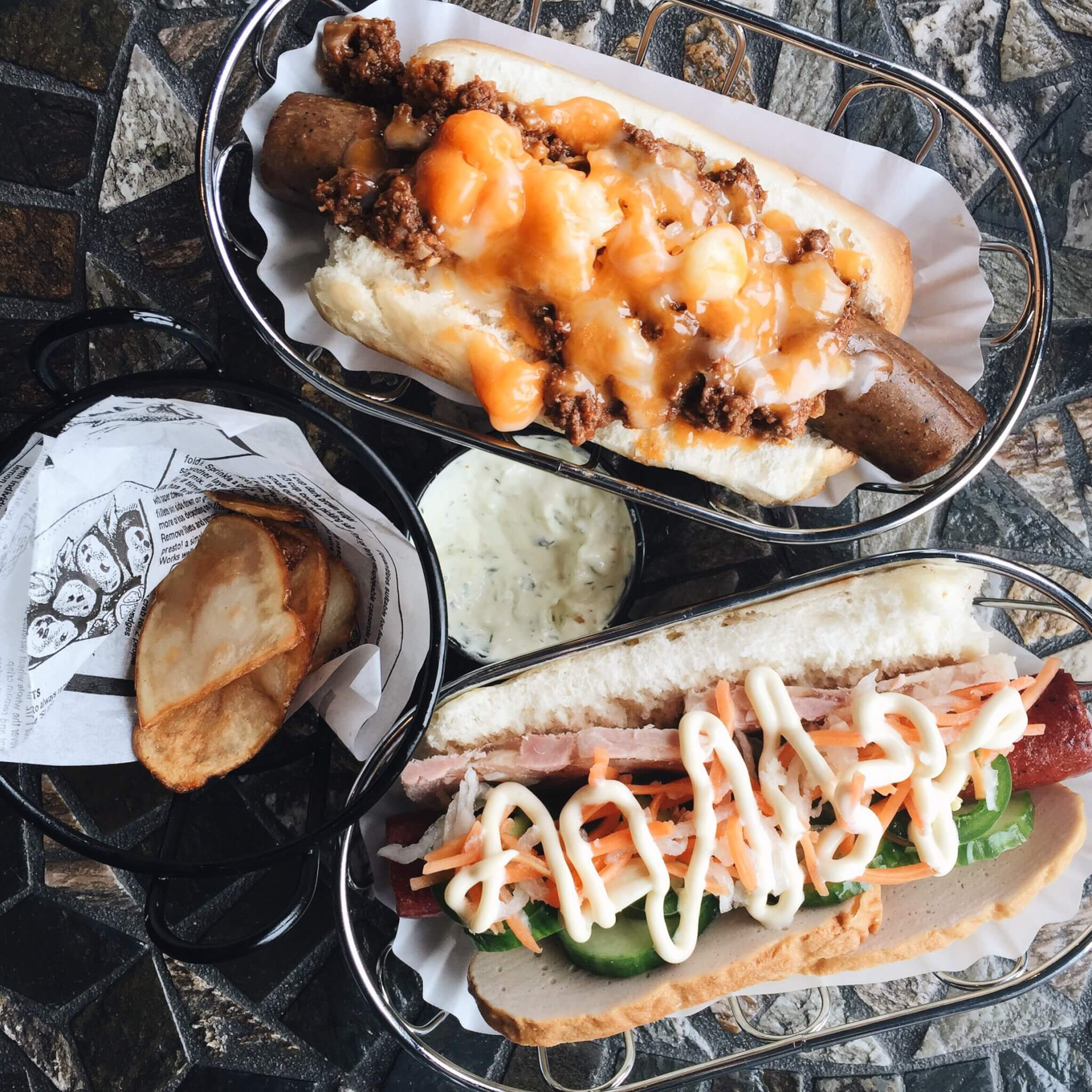 I thought my hot dog was pretty good. The Banh Mi one was not very good. Diane thought the cuts of meat could have been thinner, and there wasn’t really any pate. I also thought the mayo was overpowering – actually I thought most of the sauce on all of the hot dogs were maybe a bit too much.

I, however, really liked Andrea’s Narita dog. Everything surprisingly worked well together. (She doesn’t think there was kimchi in it though – not that she could taste or see). But I would say the Narita was my favourite, followed by the one I ordered. 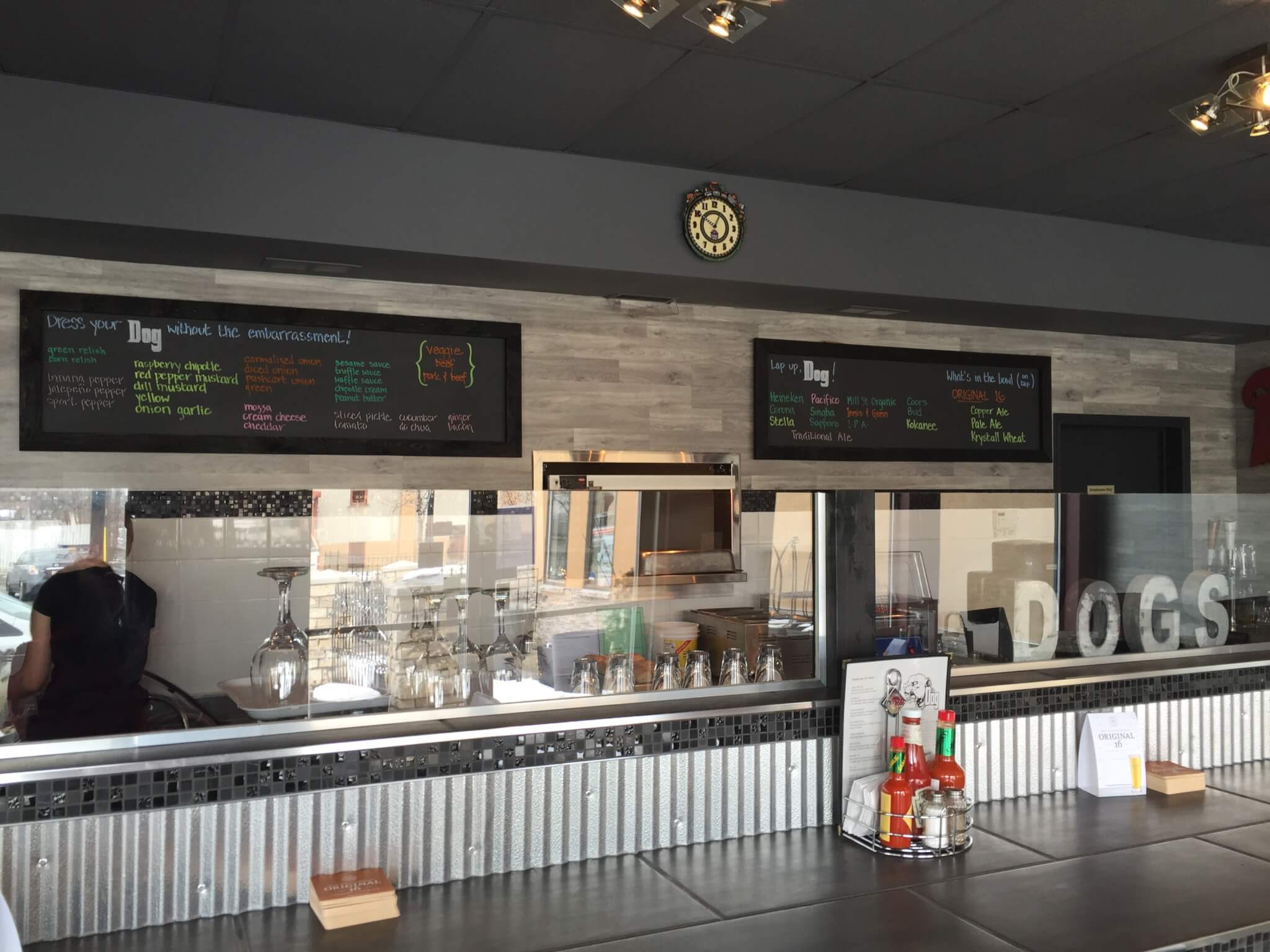 More interior of The Dog!

Lesley liked her kangaroo sausage but thought all the sauces were too tangy together – and at $12 (it was a bit more expensive as it was not your average meat), she thought it wasn’t worth it. But at $7-$8 for mine and Andrea’s dogs, I thought those were definitely worth it – they don’t skimp on meat/portions so you do get quite a bit.

Also worth noting: They have a few vegetarian “hot dog” options too – like a falafel dog! 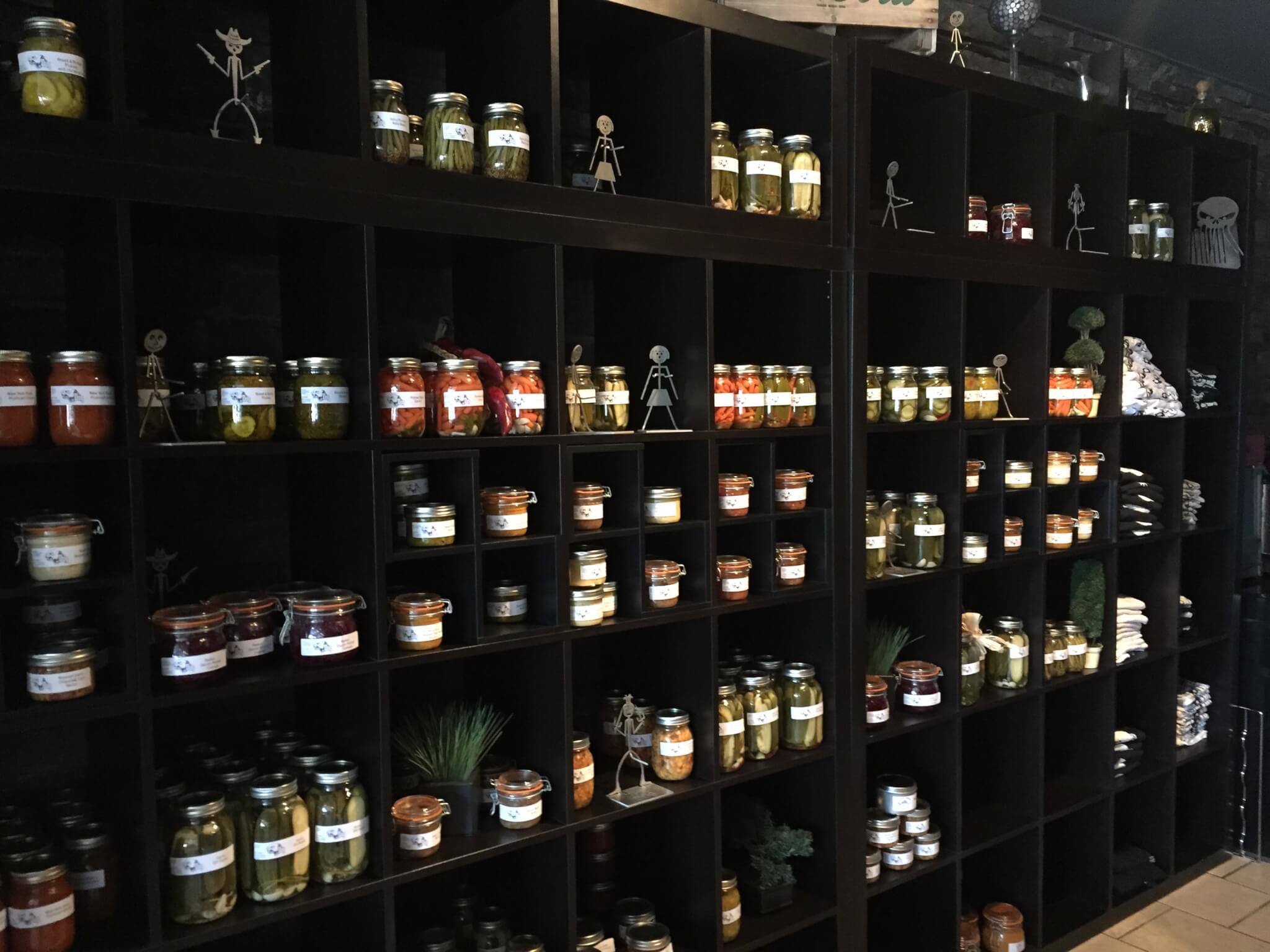 Pickled veggies and relishes made in house for sale at The Dog!

The first thing a few people asked when they saw we were trying this place was how it compared to IT Dog. I haven’t personally tried IT Dog but some of the ladies I was dining with have – and say they prefer The Dog’s hot dogs over IT Dogs (but IT Dog’s chicken is the best – I’m told).

I would simply go to The Dog more because it’s more conveniently located for me (right by work)!

It’s always nice to see new places pop up, especially along Alberta Avenue/118 Avenue. I’m sad that Absolutely Edibles had to close for The Dog to exist but it’s nice to see the owners aren’t giving up on the restaurant/food industry, just changing their focus. I think the variety is great, and they’re only a week old so I think kinks like too thickly cut meat or too much sauce can easily be fixed. I also like their wall of pickled vegetables and relishes – also all made in house that you can purchase. I think they’ve got something here!

The Dog has nice atmosphere (well-lit for photos!). The server was very friendly, the food came out pretty quick, and was pretty good for the most part. There’s also a “Build Your Own Hot Dog” option which I think I would try next time! There wasn’t many people in there when we went for lunch – I mean it’s only a week old. Hopefully it finds more success than Absolutely Edibles did. I’d definitely recommend it if you’re looking for something a bit fancier than your standard hot dog. It wasn’t anything overly special but it was solid for your more “upscale” hot dog dining. I would be back!

So have you been to The Dog?! What did you think?

Linda Hoang is a Canadian blogger based in Edmonton, Alberta, who writes about travel, food, lifestyle and pet topics. She's also a seasoned social media/digital strategist with a journalism background, the founder of the Edmonton International Cat Festival and co-founder of Stop Race Based Hate, an online anti-racism education tool. Linda loves exploring the world with her partner Mike, eating their way through cities, supporting local businesses, and photographing Instagrammable Walls. Linda is a fur-mom to two cats and two dogs.
PrevPreviousSocial Media Notes (#62) – Links for the Week of March 16-22
NextSocial Media Notes (#63) – Links for the Week of March 23-30Next