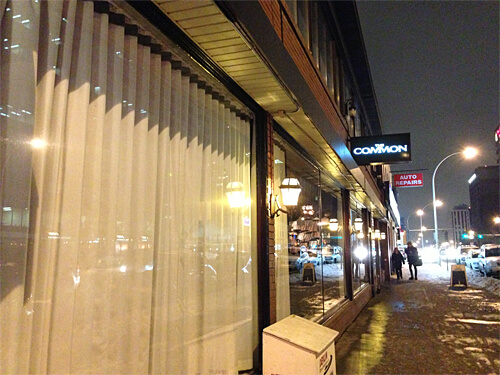 I went to The Common (9910 109 Street) for the first time last weekend and have had this opening sentence in my mind for this blog post ever since: The Common is very cool.

I know that’s not a super thrilling sentence, but seriously. All I could think about while I was at The Common and after I left was how cool the “gastro-lounge” is. The atmosphere feels cool. The decor is cool. And the people at The Common scream cool (or try to be. There’s definitely a hipster-feel to it). 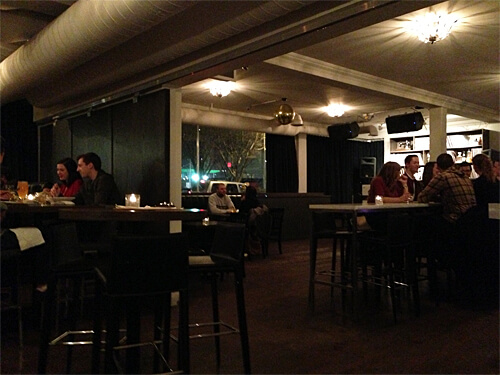 This picture doesn’t really capture the really cool decor in The Common – but they have a wall of vinyl and a wall of mirrors and pictures with old, vintage-style frames that look great. I went with some ladies from work and we were seated in a nice booth where the leather part of the booth extended almost up to the ceiling. (Again, nice decor). 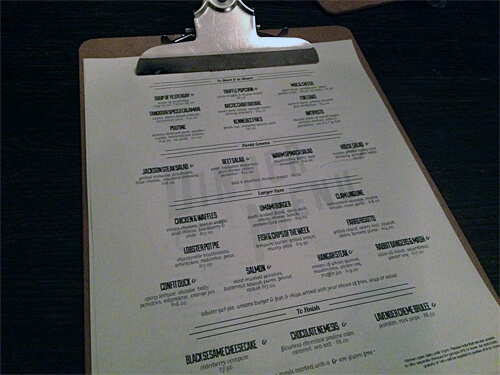 Clipboard menu at The Common.

Coincidentally this same group of ladies and I went to Three Boars Eatery a few months ago and that place also exuded cool and had a clipboard menu like The Common! Moving beyond the ‘cool’ factor, we get to the menu and food and I have to say I am really impressed with the food at The Common not just because it’s tasty, but because it’s actually surprisingly affordable! I definitely wasn’t expecting the price points. The average cost for the entrees was about $17 – which is really not bad at all considering you can go to chains like Earls or Olive Garden, etc., and have those entrees be at or even pricier than $17. To have a very cool, local, new restaurant like this offer that kind of price point for a really interesting, tasty, menu, is fantastic. 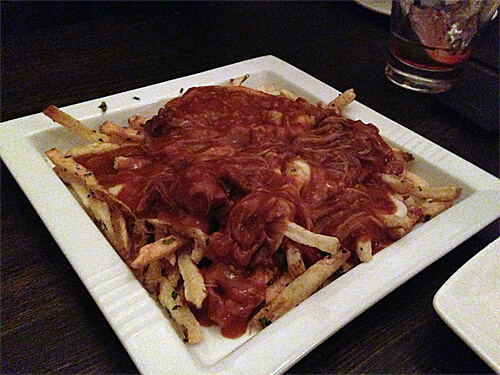 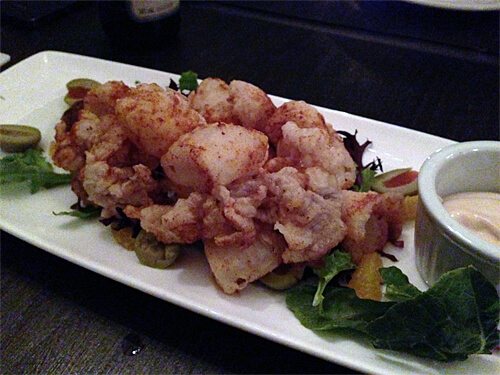 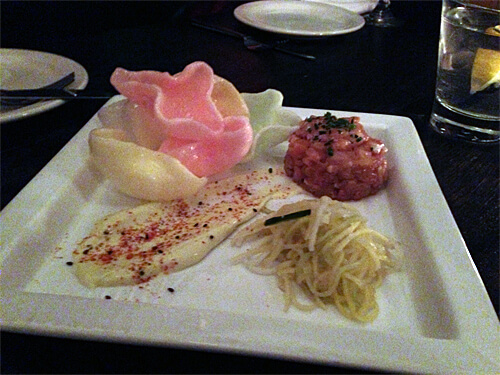 And the Arctic Char Tartare, with a sweet pear salad, wasabi mayo, and shrimp crackers ($14).

Very tasty. I loved the poutine (there’s an option to get it without pork for $11, but why would you if it’s only a $1 more for pork??) I thought the tandoori, East Indian twist to the calamari was wonderfully unique. The tartare was great, good wasabi mayo and shrimp crackers is always satisfying (and brings me back to my childhood/ten course dinners at Chinese restaurants). All three were very different and all were delicious. 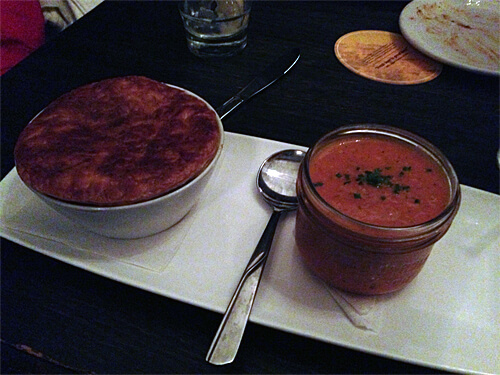 Lobster Pot Pie – Chanterelle mushrooms, artichokes, radicchio, and peas, with a side of tomato and dill soup. ($17)

I ordered the Lobster Pot Pie – with chanterelle mushrooms, artichokes, raddichio and peas, with a side of tomato and dill soup ($17). I loved the heat and flavour of the tomato – the dill is a nice touch. The pot pie was also tasty, though it was a touch difficult to break through the crust initially. But it was a great comfort food kind of dish – but elevated, because it featured lobster and chanterelle mushrooms (I thank my viewing of Chopped on the Food Network for knowledge that chanterelle mushrooms are a pretty fancy, delicacy-type of mushroom ;))

Here are some of the dishes my work friends ordered: 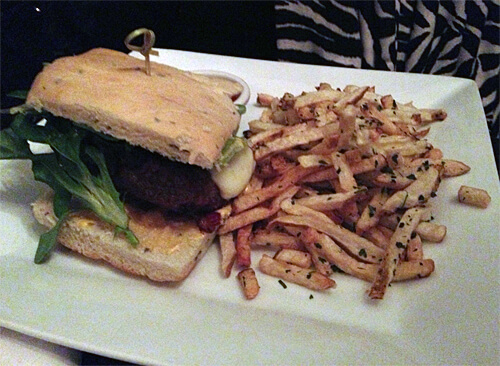 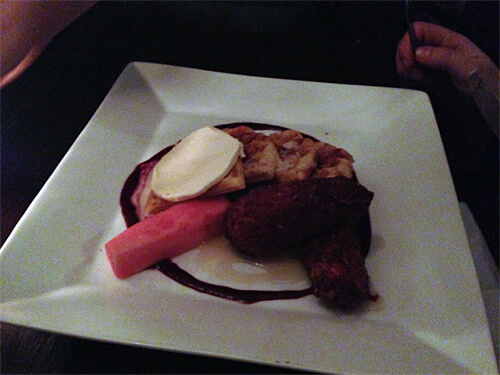 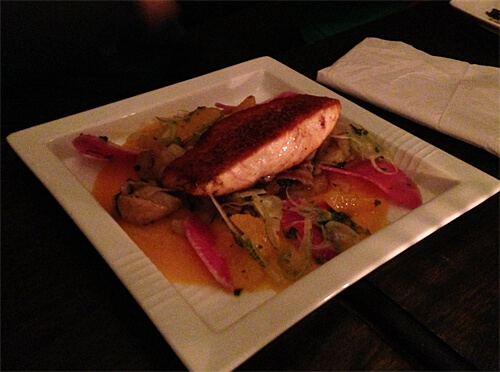 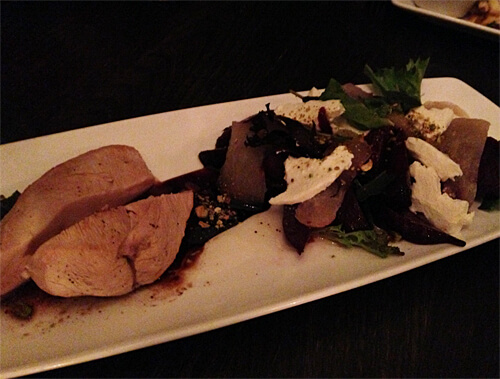 Our group was pretty satisfied with our dishes (ate ’em all up! Friend Stephanie was raving about the combination of the chicken and waffles. I’ve also seen a lot of positive social media comments on that dish – people love waffles for dinner, lol).

I don’t particularly have a sweet tooth but when trying these nice, local restaurants with the ladies it’s nice to check out what their dessert menu has to offer to. The Common offers three different desserts on their dinner menu… we ordered all three! 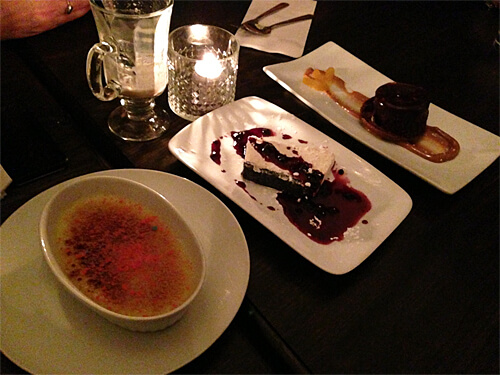 There was just something unique enough about each dessert that made us want to try them all – black sesame crusted cheesecake? Gotta try that. A flourless chocolate praline cake – that includes sea salt? Gotta try that. And a creme brulee with ROCK POPS? (Which we found out is like childhood pop rocks, but with the words switched around, probably for copyright name issues, lol). Very fun.

As I’m not really a dessert fan, I wouldn’t say that any of these desserts really blew me away or had me craving more – but I again, I did appreciate how unique/different they were from your typical desserts.

Overall, I’ll definitely be back to The Common! It turns into a more dance-spot after 9 p.m., so it would be interesting to see how a birthday kind of event would feel like there. I also want to just bring Mike there because I think it’d be a nice date spot. Plus, as I said at the start of the post – it just exudes cool and you just want to hang out there. It’s a great space and again, I was pleasantly surprised about the price points for it being such a trendy kind of place.

So have you been to The Common? What did you think?!

P.S. I apologize for the horrible quality/coloured photos. It’s definitely a dimly-lit space and I did not feel cool turning on flash on my phone camera so, you get what you get, lol. Better/brightlier-lit photos on The Common’s website if you’re really craving better photos! Lol

Linda Hoang is a Canadian blogger based in Edmonton, Alberta, who writes about travel, food lifestyle and pet topics. She's also a seasoned social media/digital strategist with a journalism background. Linda loves exploring the world with her husband Mike, eating their way through cities, supporting local businesses, and photographing Instagrammable Walls. She is the founder of the Edmonton International Cat Festival and a fur-mom to two cats and two dogs.
PrevPreviousColdest Night of the Year Walk in support of Hope Mission! (10k Walk on Feb. 23)
NextSocial Media Column: Love Letters 2 StrangersNext