People are sometimes surprised (and skeptical) when I tell them that the seafood we get in landlocked Edmonton is actually pretty good. Really!

Some of our Japanese sashimi (raw fish) options are phenomenal (shout out to Japonais Bistro, Dorinku, Sushi Wasabi, Izakaya Dorinku, and the list really can go on and on). You’ve got places like Sabor or The Black Pearl serving up quality seafood. Poke has made a splash in the city (Ono Poke + Splash Poke) featuring some super fresh, tasty cuts of cubed fish.

For seafood lovers, Edmonton ain’t a bad place to be these days, and that’s never been truer now with the opening of The Captain’s Boil, a popular seafood restaurant inspired by Cajun-style seafood boils, with a mix of Asian spices. 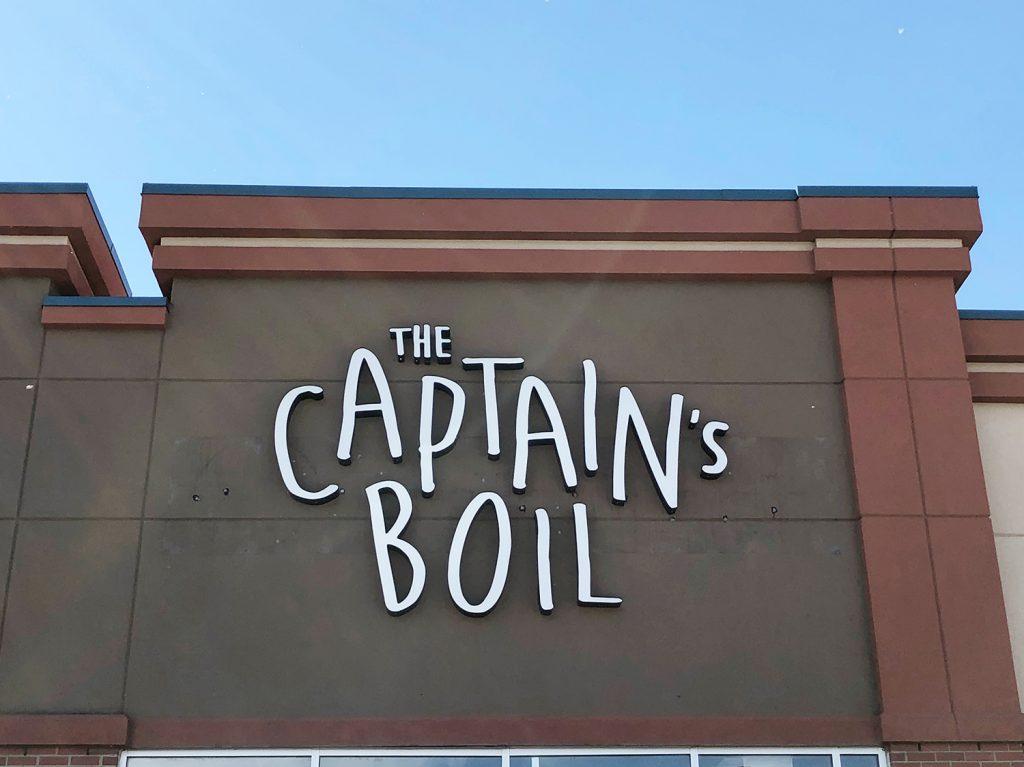 The Captain’s Boil is located at 2051 98 Street in South Edmonton Common.

The restaurant itself is a chain, originating from Ontario. A local couple with a love of seafood are the Edmonton franchisees. 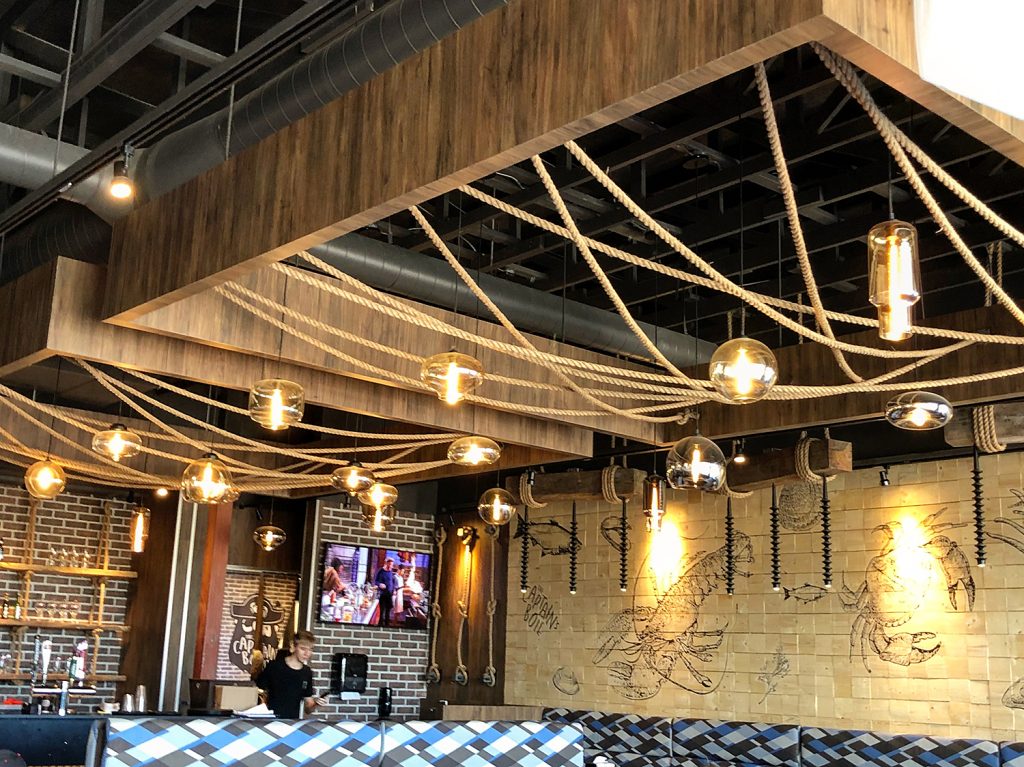 Inside The Captain’s Boil at South Edmonton Common.

Inside The Captain’s Boil, you’ll see artwork of the seafood you’re about to eat drawn on the walls, while boat ropes, planks and lights hang from the ceilings. 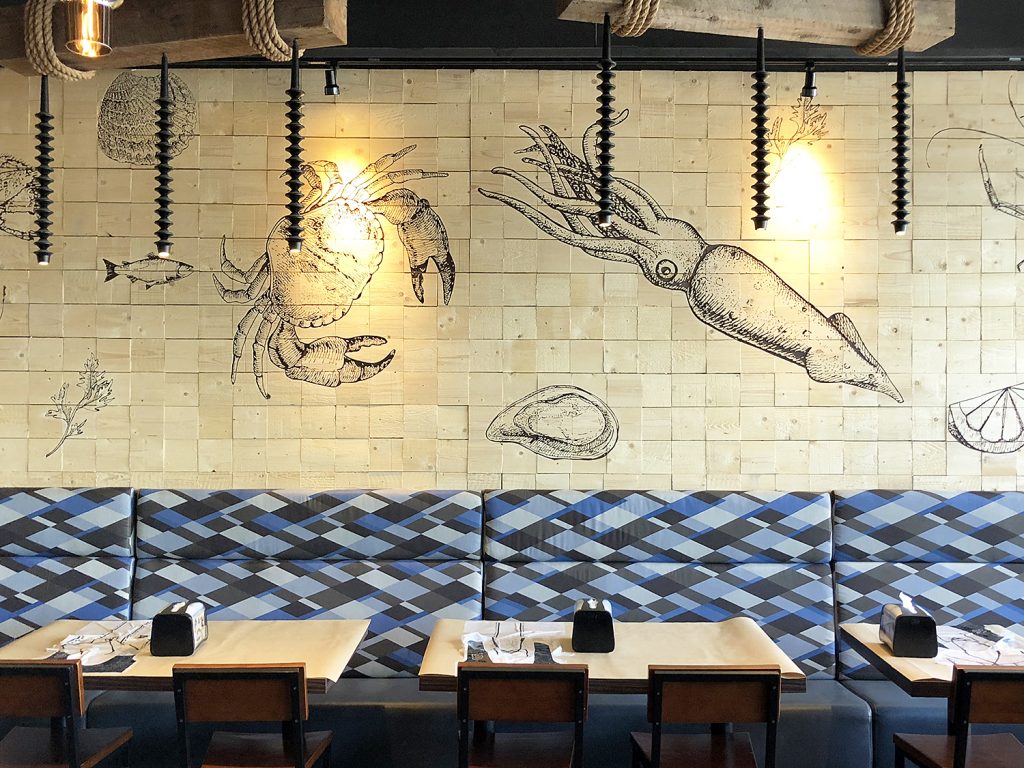 Inside The Captain’s Boil at South Edmonton Common.

You sit down to a table covered with brown paper. That’s where your food is going to get to dumped. There’s no plates. No cutlery. You put on a bib emblazoned with the restaurant’s signature pirate logo.Your boil comes out in a plastic bag (which I’m told is biodegradable and food safe!) 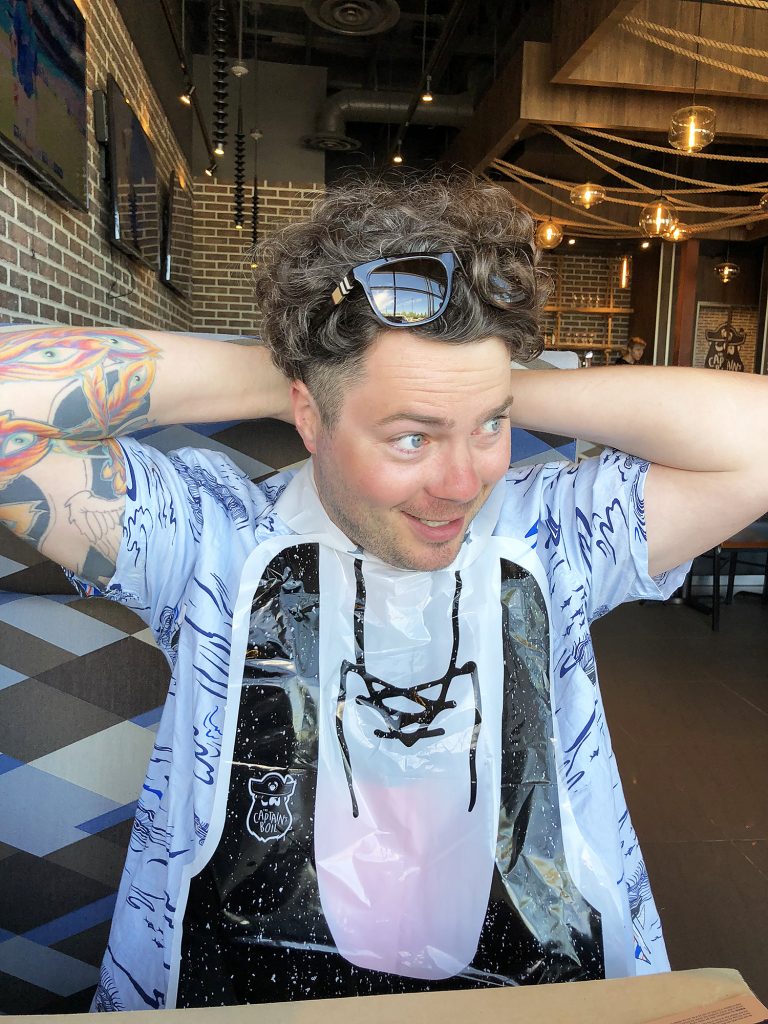 Get your bib on and dig in!

And you eat with your hands!

The menu is straight-forward. 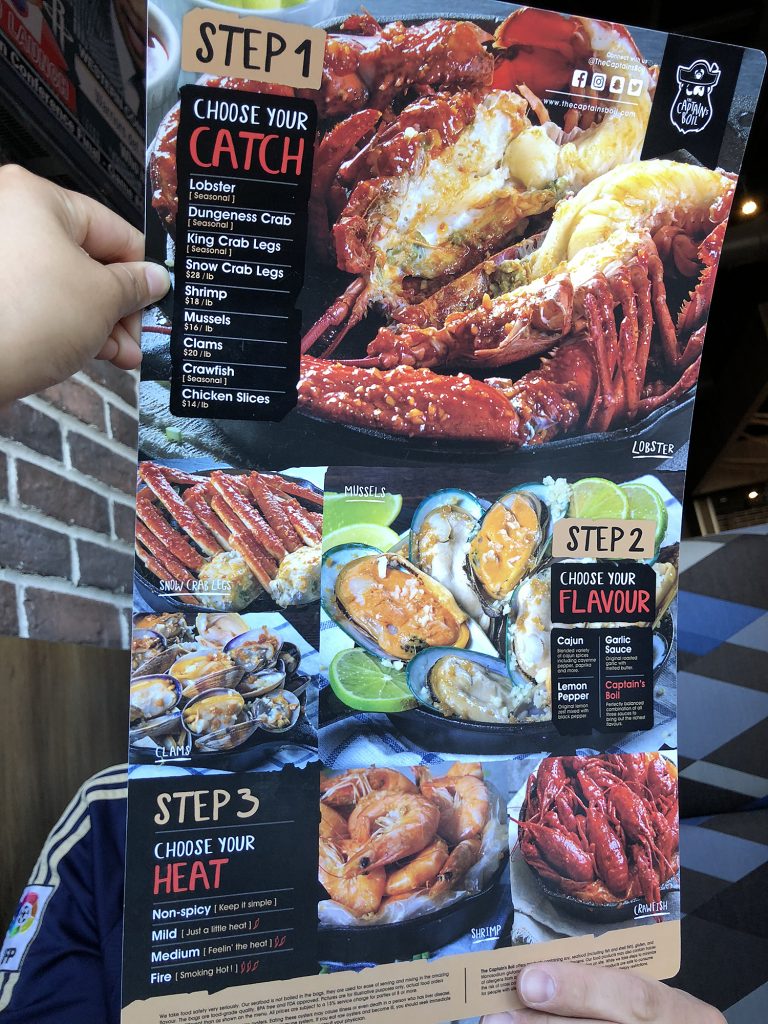 Your catch options include crawfish, lobster, Dungeness crab, King crab, snow crab legs, shrimp, clams, mussels or chicken. Okay, chicken is not seafood but hey, good to know that you can bring your non-seafood loving friends here too!

Your flavour options include Cajun (a blend of Cajun spices like cayenne pepper and paprika), Garlic Sauce (roasted garlic with melted butter), Lemon pepper (lemon zest with black pepper) or The Captain’s Boil (a combo of the three sauces!)

Finally, your heat. You can keep it simple with Non-Spicy, add just a little heat (Mild), go to Medium or try the Smokin’ hot ‘Fire’ spice level. 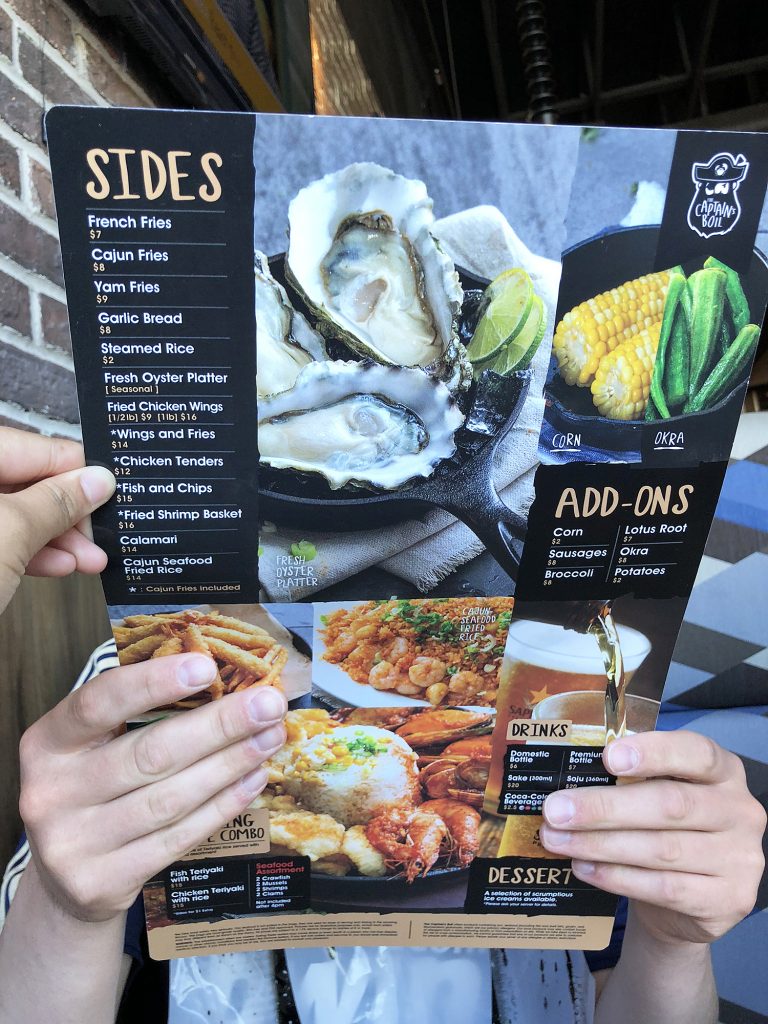 Don’t forget your sides & add-ons, or order their other menu items!

If you’re not hungry enough or feeling the boil, you could try their Sizzling Plate options instead – like the fish or chicken teriyaki rice bowls ($15). (There’s some nice Cajun seafood boil/Asian fusion dishes here!)

Excited to dig into their lobster boil!

During my visit, our group ordered two lobsters (both The Captain’s Boil sauce combo, one with no heat and one with mild heat), the Cajun Seafood Fried Rice, a Fried Shrimp Basket, and a Fish Teriyaki Rice Bowl.

As mentioned, whatever ‘catch’ you pick, along with add-ons, comes inside a biodegradable, food-safe plastic bag. Opening the bag is a delight because you get hit with the best seafood aroma. I love pausing before diving into anything I eat, and just taking a big, deep breath in. So glorious. 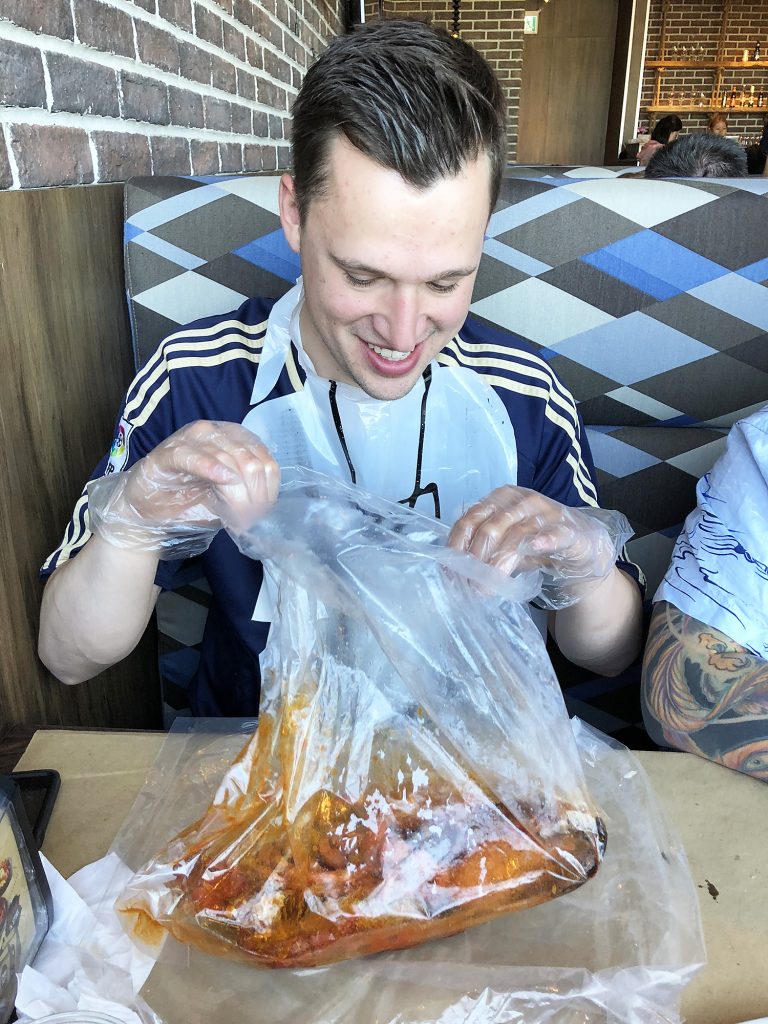 We were huge fans of the lobster at The Captain’s Boil.

It was delicious, well-flavoured, well-cooked, and FILLING! 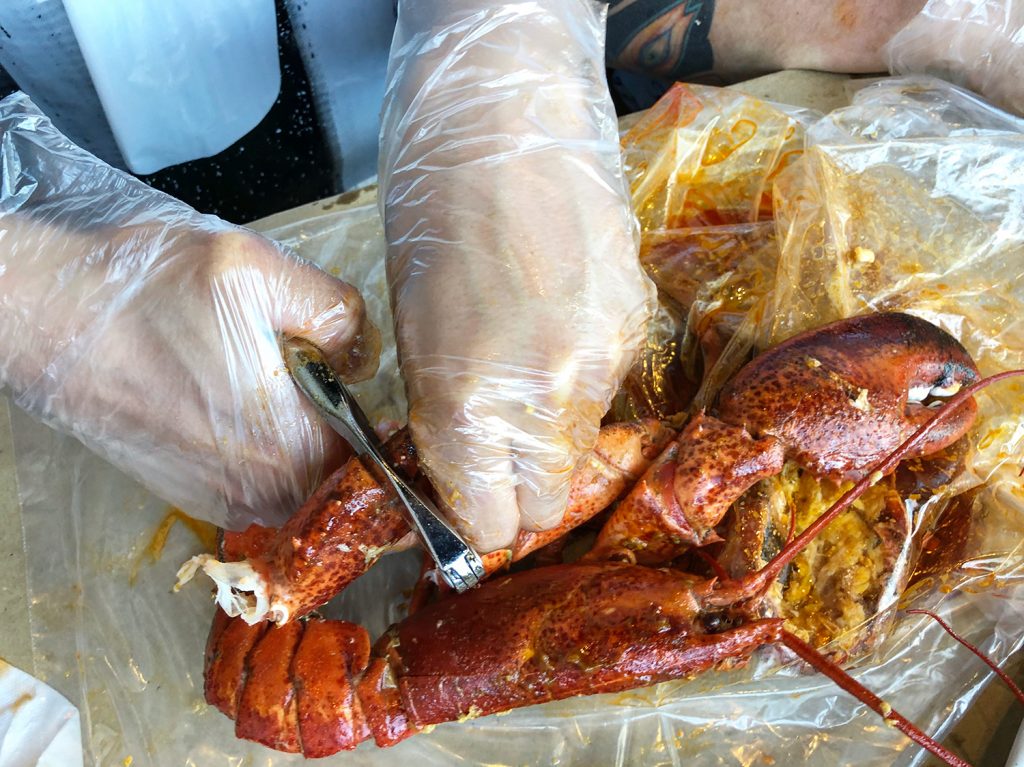 Lobster is always a bit of work. But worth it!

It tasted fresh, was the right amount of flakiness, and honestly combined with the sauces just melts in your mouth.

I love large quantities so with something like a single lobster in a bag, my first thought was oh, this doesn’t look like it will be too filling (and it’ll be pricy) but the lobster at The Captain’s Boil definitely fills you up.

Mike always gets a poutine when we go to a movie, and after this meal we went to a movie where he declined getting any food because he was so stuffed from the lobster! 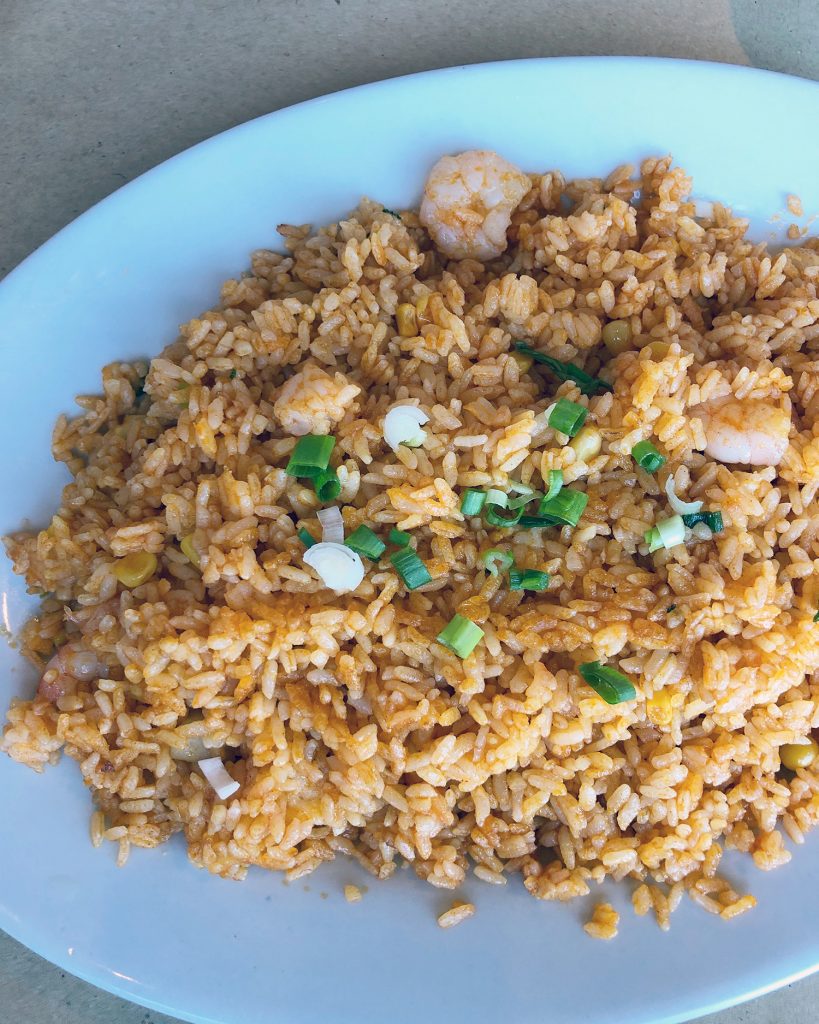 I also loved the Cajun Seafood Fried Rice. It was super buttery (omg so good) and had a great kick to it.

And for the price ($14), I thought it was great value for the size and flavour!!

We even ended up taking some rice home because we didn’t finish! 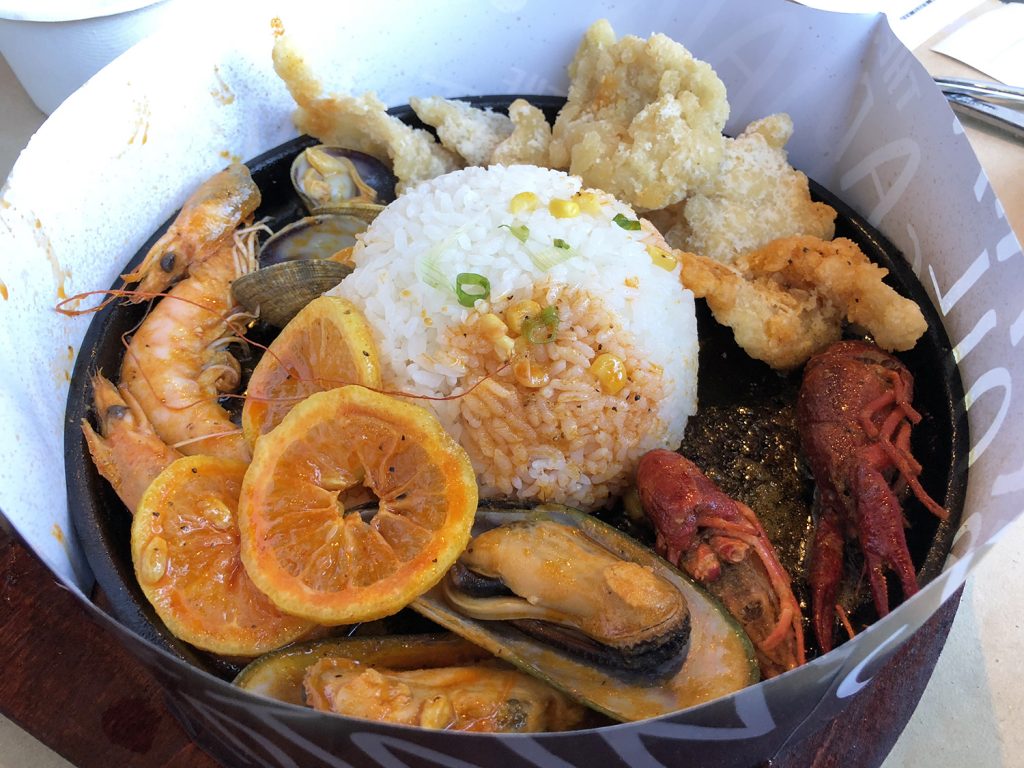 I thought for $15, the Fish Teriyaki was also a good portion, with a variety of seafood: shrimp, crawfish, mussels, clams, and tempura fish. (The teriyaki sauce comes on the side so you can choose how much you want to pour in). 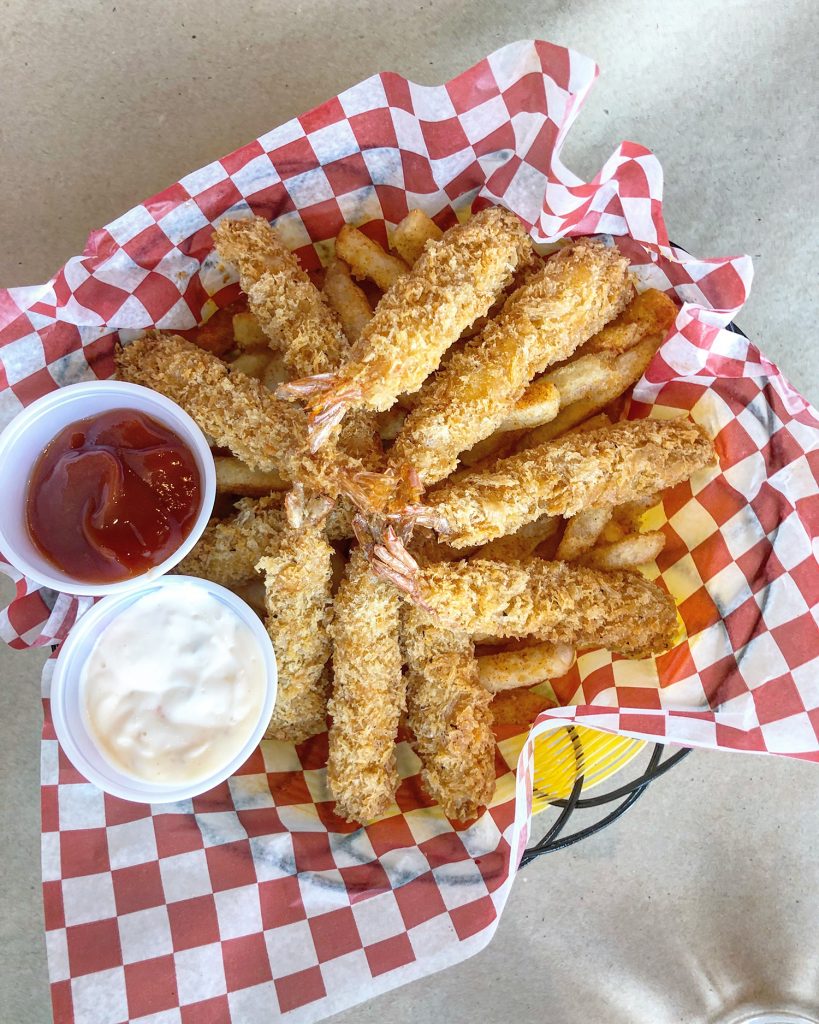 The shrimp basket comes with a generous serving of shrimp (10 pieces!) on a bed of fries. However, there was nothing particularly stand-out about the fries, or the shrimp. So of all the dishes we tried, this was my least favourite. I get it’s more expensive because of the shrimp as well, but that makes me even more inclined to recommend you grab a rice dish to share instead.

On my next trip, I’d like to try their fish and chips or calamari though! 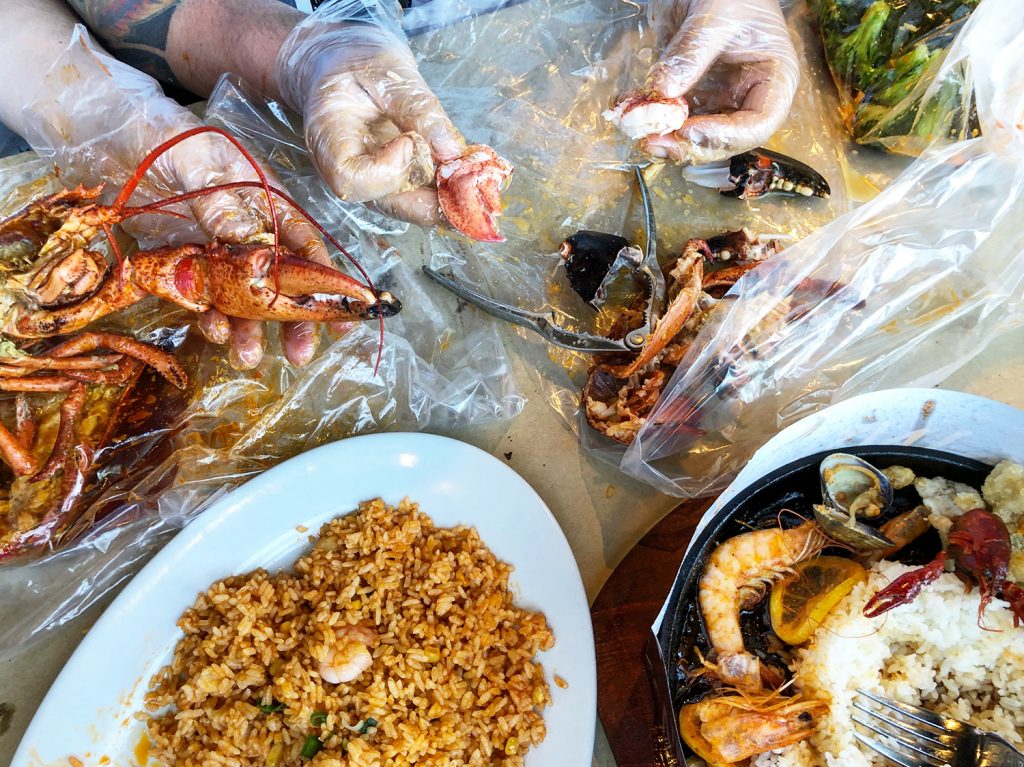 Other things to note about The Captain’s Boil:

The lobster did take a fair bit of time to come out, though we’re told that lobster – out of all the catches – takes the longest to cook. Be prepared for that. (Worth it though, says everyone at my table!)

We went right when they opened at 11 a.m. so had no issues with getting a table but I’ve heard lots of people wait quite a while to get a seat at The Captain’s Boil. The 60-seat restaurant doesn’t currently take reservations but I asked if they would because some of their Ontario locations do, and they said they would be introducing reservations in September, when they will also start doing delivery!)

None of my group had ever been to a real lobster / seafood boil before, so we’re going into this experience as newbies, with no baseline to compare to. I’d love to know how people who have been boils compare their experience at The Captain’s Boil (so please leave a comment or send me a message on social media to let me know!) 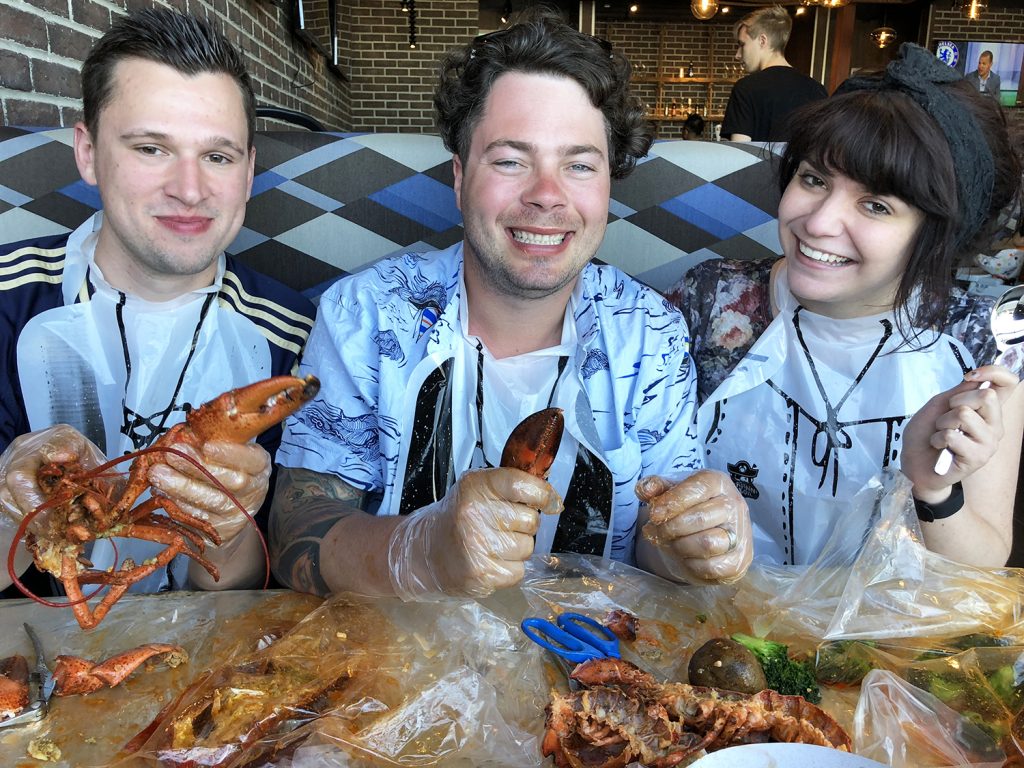 I thought everything at The Captain’s Boil was pretty well-priced with the exception of the lobster.

The lobster (and a few other catches) are understandably market price, so when we went, one whole lobster cost $58. When my friend went another day a few weeks later, it was $59 (while King Crab Legs were $57). All delicious, but that’s a huge big chunk of change, which means this place might not be for everyone, and it also might not be everyone all the time. Especially if you consider the vegetables and rice (which you’re encouraged to get so you can pour leftover sauce over and eat up) are add-on / additional cost.

If you’re getting some of the other dishes (seafood fried rice, fish teriyaki, fish and chips, for example) then it’s I think very reasonably priced, but as soon as you add one of those seafood dishes (which really though, is why you should come here— to try the boil, to get seafood in a bag, to dig in with your hands), then the meal instantly becomes expensive.

My friend works for the seafood distributor who distributes to The Captain’s Boil and told me that the lobster price the restaurant charges is actually super fair for what they actually have to pay to get the seafood. So knowing that (they’re not ripping you off!) makes me feel better about the overall price.

We thought The Captain’s Boil offered high quality, well-flavoured, well-cooked seafood and just an overall fun atmosphere and unique dining concept that we would absolutely recommend and can’t wait to come back to.

There’s a reason The Captain’s Boil was voted best seafood in Toronto two years running ( 2016 and 2017!)

It’s just not likely going to be an everyday restaurant for the price point (unless you’re a baller lol). 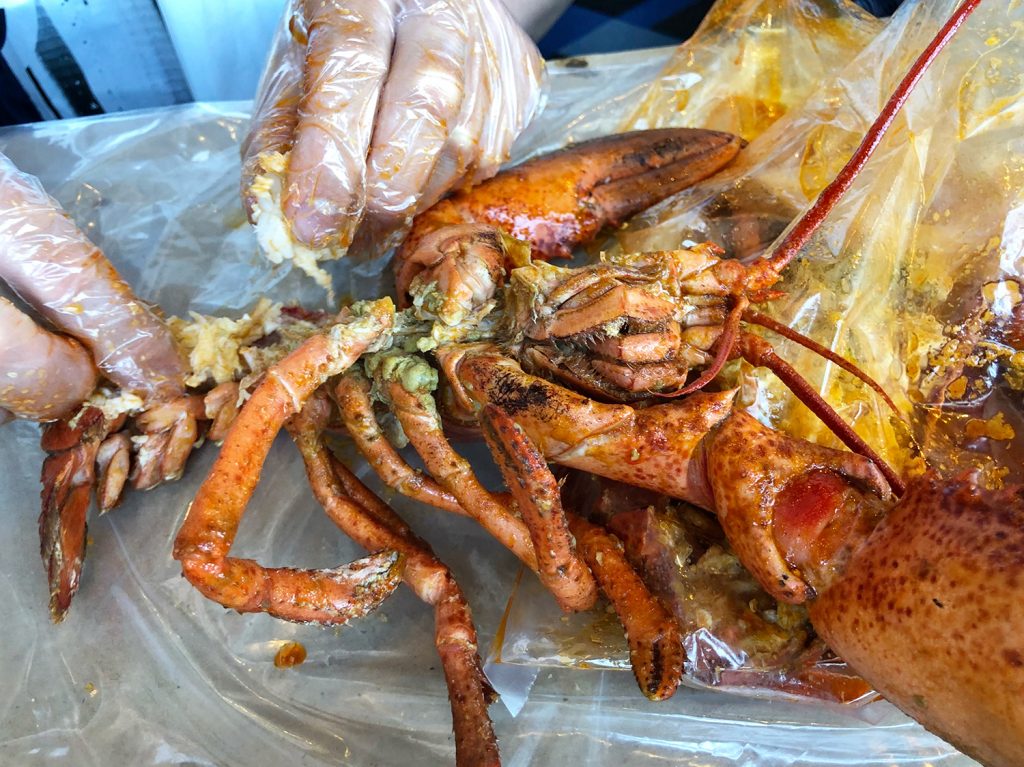 A close-up of the lobster!

Also worth mentioning, after I first posted about our meal on social media, I had a few people asking me about the waste factor of the restaurant – all the plastic bags, no real plates or bowls!? So I reached out to the restaurant to ask them a few questions to clarify for this post and they told me that they are working towards using 90% biodegradable products.

I’m happy they recognize (and heard) customer complaints about waste and are working to rectify that.

Overall, we had a great and memorable meal at The Captain’s Boil. I add it to the list of Edmonton restaurants which prove that you can get high quality, delicious seafood in the prairies. I would recommend it (but be aware of market price! $$$)

Also want to mention: at the end of our meal, when we asked for the bill, we were told the owner had covered it! This was a really lovely surprise (and does not impact our opinion on our dining experience! But thought it would be important to disclose). We had not planned anything or spoken with the restaurant prior to arriving.

And— good news: The Captain’s Boil is already working on plans to open up a second location in the north side!

If the success of this south side location is any indication, they’re going to be doing just fine in north Edmonton.

Let me know if you’ve tried The Captain’s Boil!! What did you think?? Worth the price?