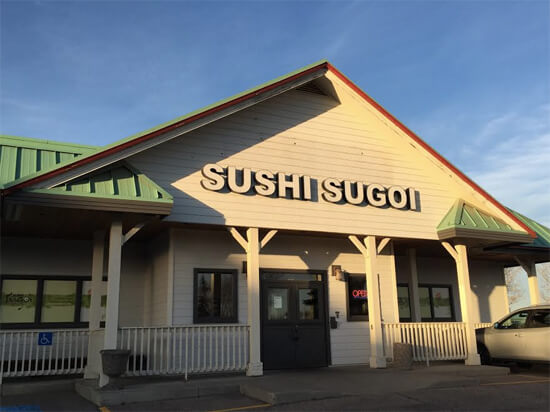 I’m always looking for a good sushi spot in Edmonton. By now I’ve pretty much got my favourites: Kenko Japanese and Japonais Bistro for overall excellence (food quality, variety, and atmosphere), Mikado for cheap and delicious lunch bentos, then other ones that are pretty good – Kobe Bistro, Yuzen, etc. I know there’s countless more I haven’t tried yet but I’m getting there!

Last week I finally got around to trying Sushi Sugoi Edmonton in the south side (2874 Calgary Trail).

Sushi Sugoi had been on my list of Japanese places to try for almost a year now. My former co-worker Fiona had tried it and recommended it to me but I always end up going back to my old favourites that it took me the year to finally get to Sushi Sugoi, fittingly, with Fiona! 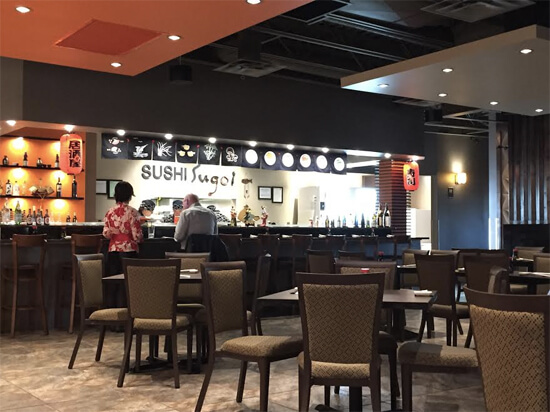 Sushi Sugoi is located in what used to be an Outback Steakhouse. I mention that because the building is huge! It’s a bigger space than most Japanese restaurants, with an entire side of the building I think primarily unused except for private functions. At least that’s what Fiona speculates, she and her hubby have been to Sushi Sugoi many times over the past year and have never seen the one side of the restaurant space used.

It’s a very clean, polished, modern looking restaurant. They have an Urban Cultivator used to grow their own micro greens. (NAIT has one too! As do a few other restaurants in Edmonton). 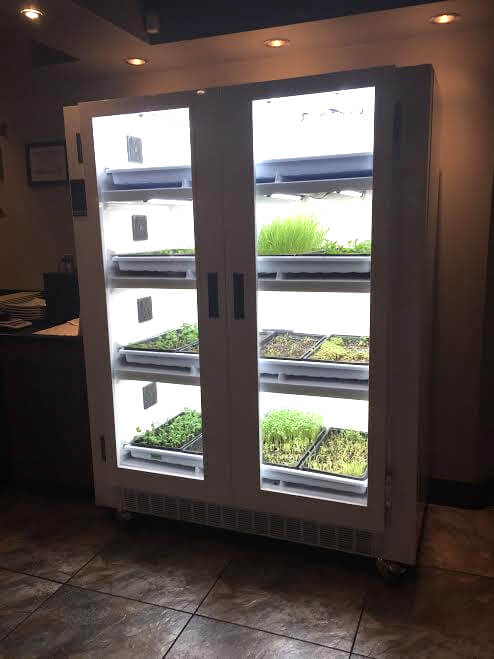 Sushi Sugoi uses an Urban Cultivator to grow its own fresh, organic microgreens!

Sushi Sugoi has a bunch of dishes unique to them, which I like, but also lots of what you’d expect to find at Japanese restaurants. Fiona and I decided to share a couple of dishes, but I ended up ordering some additional items for myself. Fiona has celiac disease and can only eat gluten-free food, so I was impressed with how accommodating Sushi Sugoi was with that. They have gluten-free soya sauce, and are able to confidently say which of their dishes are or aren’t gluten-free – and they’re also able to adapt and make certain dishes gluten-free by request.

This is what we ordered: 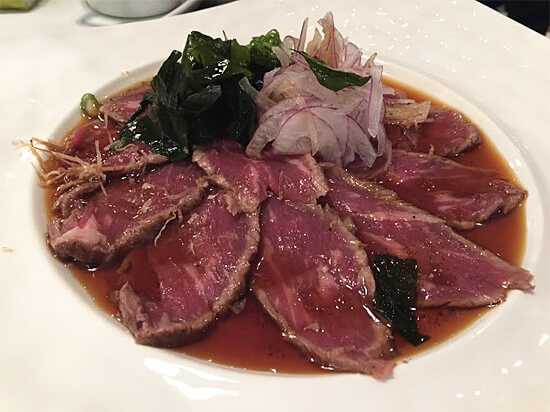 The beef tataki ($10) was good but the cuts were a bit thicker than I prefer. Kenko still reigns supreme as best tasting and best portion size for your dollar when it comes to beef tataki. 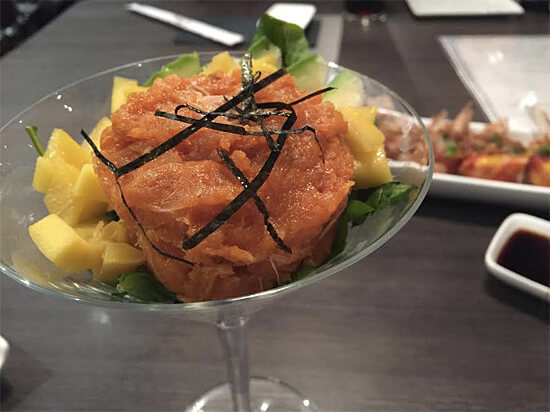 The Spicy Tuna Cocktail Salad ($9) wasn’t anything to rave about. It just wasn’t very flavourful. 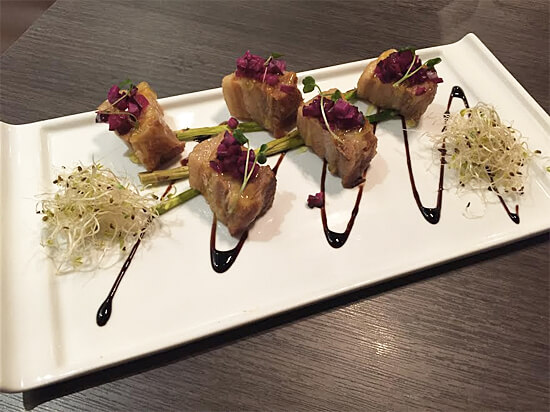 I wasn’t overly impressed with the miso pork belly ($10 – it wasn’t tender enough for me) though the combo of pickled apple, asparagus and Urban Cultivator-grown microgreens was nice. 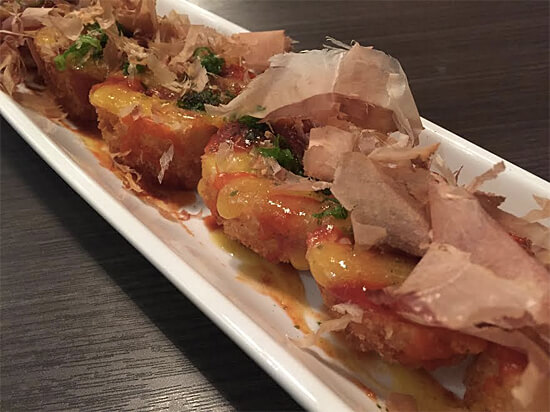 While the rolls weren’t my favourite ever, I thought they were all good with the exception of the Crazy Rolls ($14). I don’t think the sauces worked together at all, and I really don’t like dried fish flakes. Had I known that was going to be on them (menu didn’t say) I probably wouldn’t have ordered it! 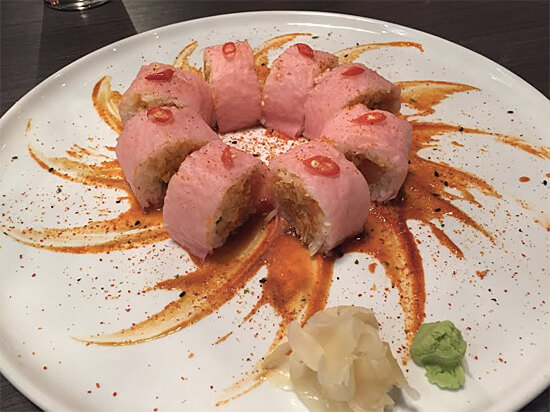 I loved the heat in the Hardcore Rolls ($16) and the refreshing, light taste of the Fiji Island Rolls ($15). I also think it’s interesting Sushi Sugoi uses coloured soy wrappers for some of their rolls. My first experience seeing that in a Japanese restaurant! I also ordered the Golden Dragon Rolls (seasoned salmon, asparagus, green onion, red pepper, masago, special spicy sauce) – $14 – to take home for Mike, and thought those were pretty good. 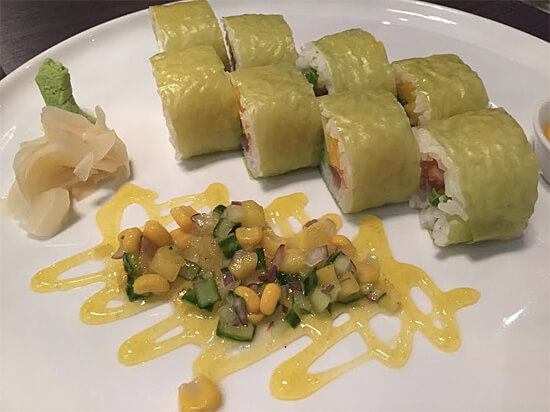 The presentation for all the dishes was also great. A feast for the eyes!

We didn’t order dessert which after the fact I regretted for the sake of this review (but I was pretty stuffed lol).

Overall, Sushi Sugoi shoots up to my list of pretty good Japanese restaurants in Edmonton but it doesn’t take the top spots. The food is good, but not incredible – the service was good and the place has a nice atmosphere – plus I think it’s great they are so accommodating for dietary restrictions – but it’s not my absolute favourite spot. Price points are on par with your typical Japanese spot. Lots of dishes to choose from but there’s also lots of Japanese restaurants with similar dishes to choose from in Edmonton.

They do all you can eat brunch on Sundays which I would be curious to try! Sumo Sumo in Sherwood Park also does Sunday brunch but Sushi Sugoi would be a lot closer. Sushi Sugoi also has cheap ($1.25/ea) oysters on Tuesday nights (similar to Japonais Bistro) which would be worth trying too. I’m also told the Ocean Platter is a must-try.

So I do foresee a second trip in my future!

Have you been to Sushi Sugoi? What did you think??

Linda Hoang is a Canadian blogger based in Edmonton, Alberta, who writes about travel, food, lifestyle and pet topics. She's also a seasoned social media/digital strategist with a journalism background, the founder of the Edmonton International Cat Festival and co-founder of Stop Race Based Hate, an online anti-racism education tool. Linda loves exploring the world with her partner Mike, eating their way through cities, supporting local businesses, and photographing Instagrammable Walls. Linda is a fur-mom to two cats and two dogs.
PrevPreviousSocial Media Notes (#46) – Links for the Week of October 13 – 19
NextSocial Media Notes (#47) – Links for the Week of October 20 – 26Next