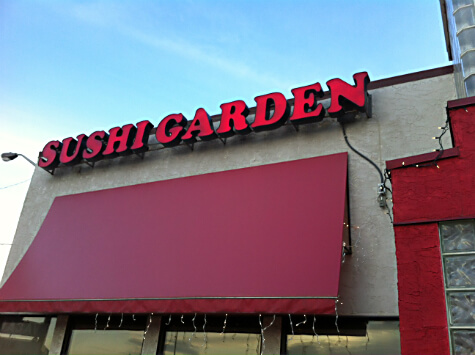 On Tuesday, Mike and I went for All You Can Eat Japanese at Sushi Garden (10401 Mayfield Rd.) for my brother’s birthday dinner! I believe it’s a fairly new restaurant, replacing what used to be a Lee Garden on Mayfield Road. 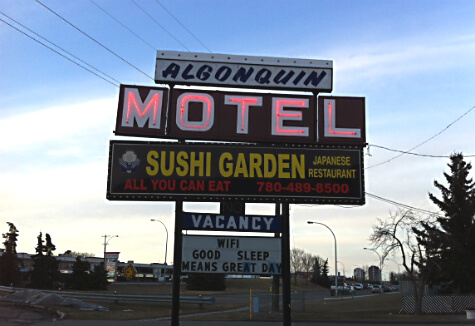 Not the best signage location for Sushi Garden 10401 Mayfield Rd.

It’s also right by a motel and shares its main signage with the motel’s sign, which I think is unfortunate and a little odd looking. Basically it may look sketchy on the outside but once you get beyond that, you’re in for some solid all you can eat Japanese! 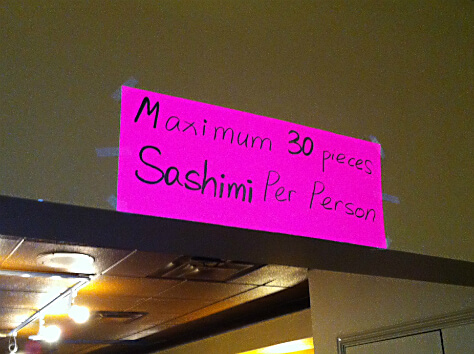 30 pieces of sashimi per person for All-You-Can-Eat, Yum!

In bright neon colours as soon as you enter you will see that each person is allotted 30 pieces of sashimi, which is 10 pieces more than what you’d get at all you can eat Sapporo and Zen. Winning in my books already! You see for years I have had a recurring dream of being presented with a mountain of raw fish. It’s only ever a reality at all you can eat places :D (Although the chefs never present them in ‘mountain’ form lol).

I forgot to take a photo of the inside of the restaurant but it’s fairly large, clean space with your standard tables in the middle, booths along the sides of the room, and sushi chefs and kitchen against the back wall. 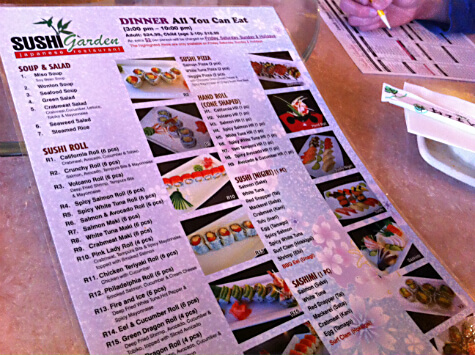 All You Can Eat dinner costs $24.99 a person (lunch is about $16) which is pretty much your standard for the all you can eat places in Edmonton. Mike and I don’t typically go for buffets/all you can eat dinners unless we’re with our family because we consider the price to be kind of steep – even if you do get a ton of food, lol.

Sushi Garden’s selection is quite massive. There’s a ton of assorted rolls with funny names like “Pink Lady” and “Rock Rolls”. There’s also your typical sashimi options and then a bunch of appetizer/tapas dishes. There’s definitely something there to please everyone and we know this because Mike is a bit picky when it comes to Japanese and yet he had a bunch of options to choose from and he was left completely stuffed. 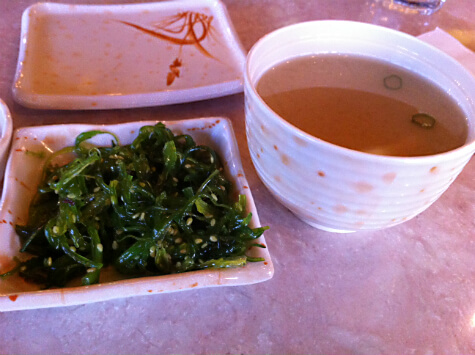 Seaweed Salad and Miso Soup to start at Sushi Garden

I love seaweed salad and miso soup but at other Japanese restaurants it’s just not economical to be ordering a bunch of starters plus the mains that I want. At all you can eat? Go crazy! I got two seaweed salads and three miso soups throughout the meal and it was wonderful. 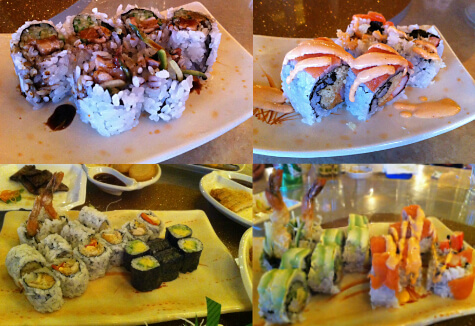 We ordered a variety of rolls including “Crunchy Rolls,” “Volcano Rolls,” “Pink Lady Rolls,” “Chicken Teriyaki Rolls,” “Fire and Ice Rolls,” “Green Dragon Rolls” and more. When I say there’s definitely something for everyone, the Chicken Teriyaki Rolls is a perfect example of that. Mike normally avoids rolls at Japanese restaurants because he’s not too big into raw fish or crabmeat, etc. but he was intrigued by chicken teriyaki-filled rolls. They kind of remind me of Zen’s “Alberta rolls” which are basically beef teriyaki rolls. 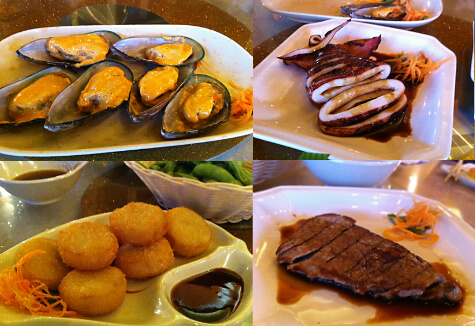 We tried deep fried scallops, deep fried breaded chicken, spicy mussels, yakitori skewers, grilled squid, beef teriyaki, edamame, grilled salmon cheeks and udon. Again I repeat, great selection! We tried so much and yet we barely made a dent in the full menu! There’s still so much that needs to be tried (more trips to Sushi Garden that need to had!) 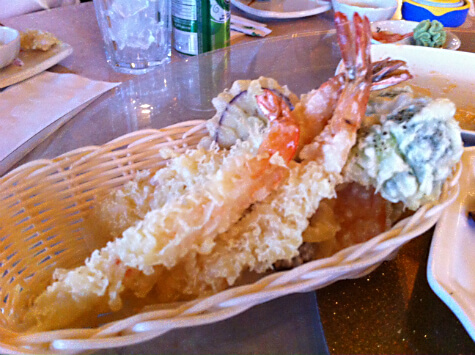 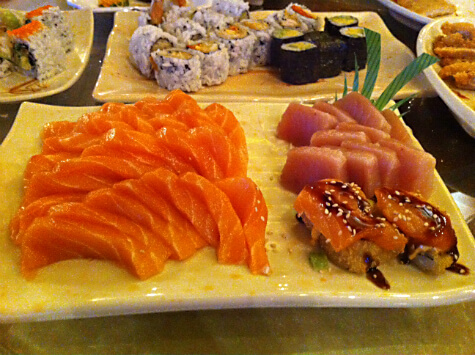 There were six of us at dinner so in theory we could have ordered up to 180 pieces of sashimi. (I am practically drooling just talking about it). Unfortunately not everyone in my group is as gung ho about the raw fish as I am, and there’s only so much of it I can eat along with everything else, so we only ended up ordering 70 pieces in total (which is still quite a bit I’d say!)

Overall I was pleased with practically everything we were served. Things that stuck out a bit (negatively) were the beef teriyaki and the sushi pizza. The sushi pizza is basically raw fish over onions, green pepper, spicy mayonnaise and a crispy sushi rice base. I think it was the crispy sushi rice base that threw me off. The beef teriyaki was really dry and chewy. Some of the food could also be described as small or puny-looking. I’ve definitely had higher quality sashimi and tempura, but it was still delicious at Sushi Garden. The food came out fairly slowly but our server was quite friendly and quick with water refills.

The general consensus is that we enjoyed our meal and we’d definitely come back. In fact my brother and my mom had been to Sushi Garden several times before. My brother says it’s his favourite all you can eat Japanese place out of the other ones available in the city. Very good bang for your buck. The varied selection is a huge perk. And obviously as is the case with all you can eat places… there’s just something so enticing about “unlimited” food! :) As I said earlier, we ordered so much and yet we still didn’t try everything. There’s so much more I wish my tummy could have fit in! Also be warned if you over-order and can’t finish, you could be charged for the leftover food. Standard warning present at the other all you can eat Japanese joints as well. You get way more in your belly here, and for a cheaper price, than if you’re going out for dinner at a non-AYCE Japanese restaurant.

Sushi Garden is a must try for Japanese food lovers and a very welcome addition to the few all you can eat places we have here in Edmonton. While the quality of the food here may not be as high as other Japanese restaurants – it’s tasty enough and left me thoroughly satisfied. The servers are very nice, the variety is great, there’s quite a bit of cooked options if raw fish isn’t really your thing, but certainly enough raw fish to satisfy as well.

So have you been to Sushi Garden? What did you think??

Linda Hoang is a Canadian blogger based in Edmonton, Alberta, who writes about travel, food lifestyle and pet topics. She's also a seasoned social media/digital strategist with a journalism background. Linda loves exploring the world with her husband Mike, eating their way through cities, supporting local businesses, and photographing Instagrammable Walls. She is the founder of the Edmonton International Cat Festival and a fur-mom to two cats and two dogs.
PrevPreviousClicks of the Day: Wednesday, March 21, 2012 Edition!
NextClicks of the Day: Thursday, March 22, 2012 Edition!Next