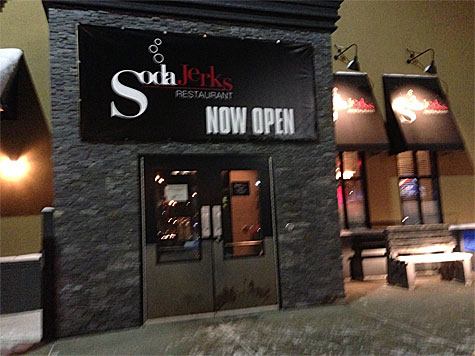 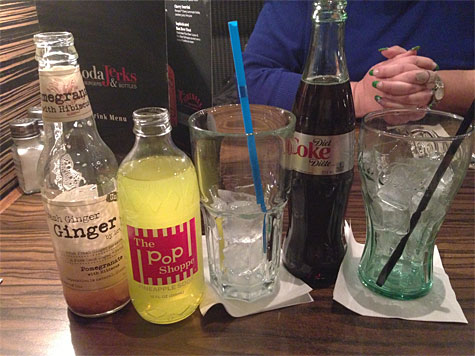 Soda Jerks has a very wide variety of – you guessed it – sodas! An actual ‘soda jerk’ is someone who served sodas from a ‘soda fountain’ which was very popular back in the 40s (according to my Wikipedia/Google search ;)) There aren’t actual soda fountain operators at this Soda Jerks but there are definitely a loooot of sodas. From grape soda to root beer soda to jasmine green tea soda to bubble gum soda to ‘Mandarin Orange Jigger’ soda and more! There’s also milkshakes and ‘Big Kid Floats’ (shakes with alcohol in them). There are soda bottles on a cool display in the centre of the room (which I failed to take a picture of) but it adds to the nice, modern style of the dining room.

I normally just order water when I eat out (I know, very thrilling) but decided to go for a soda here because how can you go to a place called Soda Jerks and not try one of their sodas? I ordered a pineapple ‘pop shoppe’ soda, Mike ordered a pomegranate hibiscus soda and his mom had classic Diet Coke. Mike’s pomegranate hibiscus soda was awful, lol. Wouldn’t recommend it. Way too sweet with a weird after taste. He ended up getting a regular Coke after a few sips of the pomegranate. My pineapple soda was alright. I am not a huge fan of fizzy drinks to begin with so I did end up going back to my favourite, water, in the end. Still as I said- trying sodas at a place called Soda Jerks is clearly a must! 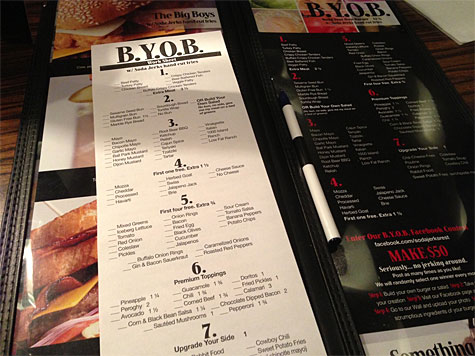 Menu (including a Build Your Own Burger BYOB) section at Soda Jerks!

Soda Jerks is essentially a burger and soda joint. The menu features a bunch of different burger options and a few appetizers. It also features a few massive burgers that if you can finish (+ three sets of fries) in 30 minutes you get the meal for free and a $100 gift certificate. Crazy. (There’s one called the Doris that if you can finish you get a free T-shirt too). Kind of a fun (greasy, unhealthy) novel little contest.

We weren’t going to try that challenge. Instead, the fun/cool part about Soda Jerks to us is that it features a “BYOB Build Your Own Burger” section! It’s very reasonably priced – starting at $12.75 for your typical toppings and then adding extra $1-$2 per premium/extra toppings. You get to mix and match whatever tickles your burger fancy and this intrigued all three of us enough to for the BYOB option! 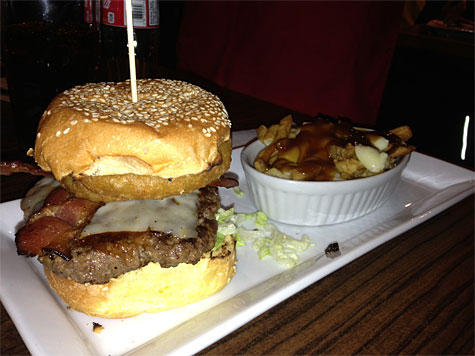 Mike’s BYOB was a beef, ketchup, chipotle Mayo, ball park mustard, jalapeno jack cheese, iceberg lettuce, red onion, bacon, and onion rings on a sesame seed bun with a poutine for his side. Mike enjoyed his burger and said being able to build it added to the fun – plus how often do you get onion rings on a burger? Fun. 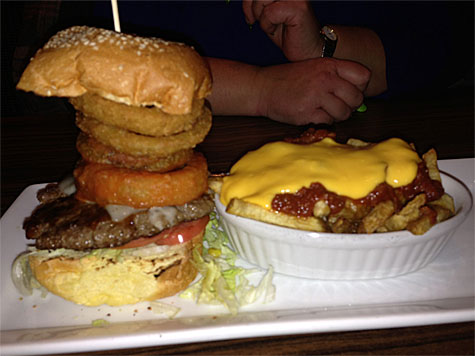 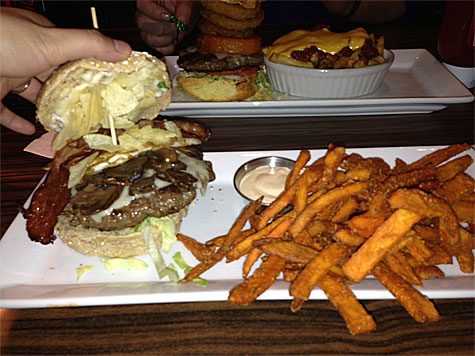 And my BYOB, which I personally think was the best of the night ;), was a beef, bacon mayo, harvarti cheese, iceberg lettuce, fried egg, bacon, potato chips and mushrooms on a multi-grain bun with a side of sweet potato fries and chipotle mayo. UM YUM! Fried eggs on burgers or sandwiches brings me back to my childhood. My dad would often cook up fried egg sandwiches for us – with soya sauce, delicious. I also love potato chips. I actually originally thought the chips would come on the side too but nope – little regular flavoured chips sprinkled in my burger gave it an excellent crunch. Also I cannot say enough about how tasty sweet potato fries are… and don’t get me started on chipotle mayo!! It has become my favourite kind of mayo. 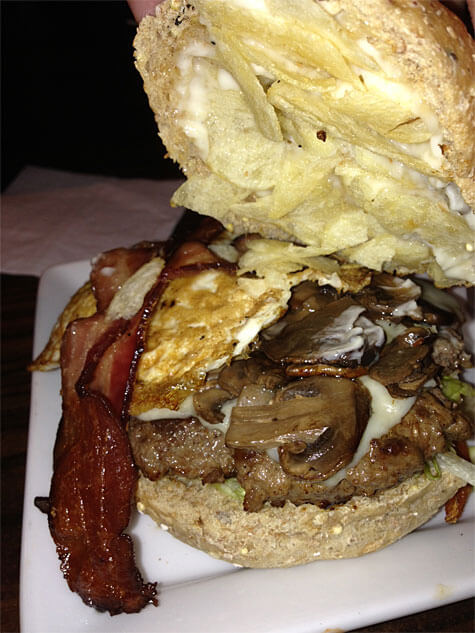 A close-up of my BYOB.

Overall I loved Soda Jerks! The build-your-own-burger option is a great touch and sets it apart from other restaurants (Um, I think. I actually haven’t been to Five Guys or Fatburger or any of those other burger joints in Edmonton yet, whoops). BYOB is definitely affordable, at under $13 with none of the premium toppings (which you really don’t need to have it a solid burger, because the regular toppings are varied enough), it’s hard to beat that price! The possibilities are endless – you can even do healthier, salad/no bun options. It’s really just a lot of fun. :) Our server was also great – friendly and talkative. The food also came out very fast. We had no complaints (except the pomegranate hibiscus soda was bad, but that’s really soda select at your own risk…) We’ll be back!

So have you been to Soda Jerks?! What did you think??

Linda Hoang is a Canadian blogger based in Edmonton, Alberta, who writes about travel, food lifestyle and pet topics. She's also a seasoned social media/digital strategist with a journalism background. Linda loves exploring the world with her husband Mike, eating their way through cities, supporting local businesses, and photographing Instagrammable Walls. She is the founder of the Edmonton International Cat Festival and a fur-mom to two cats and two dogs.
PrevPreviousSocial Media Column: Tweeting Checkstop locations just plain stupid
NextSocial Media Column: Social media lending a helping hand at ChristmasNext