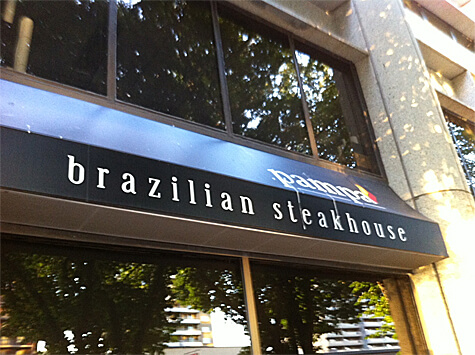 I have wanted to try Pampa Brazilian Steakhouse at 9929 109 Street ever since it opened – how can you not be attracted to the idea of all-you-can-eat meat served endlessly to your table?? (Well, I guess unless you’re a vegetarian, lol). But Mike and I always pushed it back on our list because we aren’t ever really keen on the idea of spending $50/person for dinner at any restaurant.

When we were in Las Vegas earlier this year – we decided to finally go for it and try the ‘Brazilian Steakhouse’ concept. We went to Fogo de Chao and had one of the best dinners of our lives!! (Not exaggerating).

I suppose it’s that fabulous experience at Fogo that heavily played a factor in how we felt with Pampa – when we did finally try it last month. We just kept comparing everything to Fogo and Fogo came out on top for mostly every point. 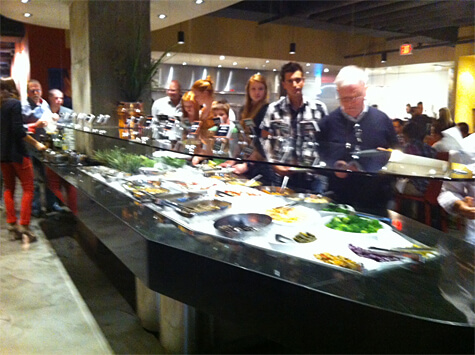 Not to say that Pampa wasn’t impressive. Pampa’s salad bar is amazing! (Excuse the varying qualities of my images, some were on my iPhone, some on digi cam, some were rushed because I felt awkward taking a photo, some not, lol). Tons of selection to please even the pickiest – and a divine mini potato dish that I couldn’t get enough of.

And – such delicious meat. 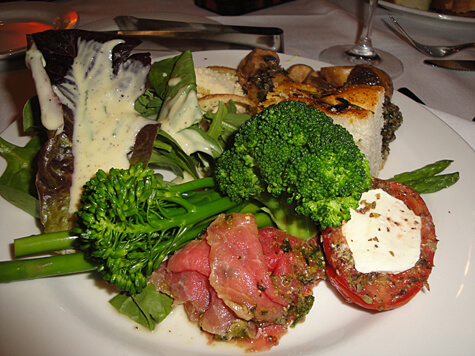 What I learned from Fogo is not to go too crazy on the all-you-can-eat salad bar, because hello… meat is on its way! So I just chose a few items and then patiently waited for the meat to roll in. 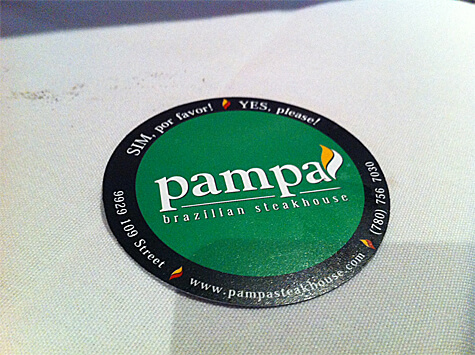 At Pampa, you control when you want meat by turning a circular disc over to green or to red. Green = meat please! Red = not right now. The Pampa ‘grill masters’ (or Gods of Meat) are supposed to be walking around the dining room keeping an eye on what colour is present at tables, and if it’s green – they’re supposed to head on over and cut you off delicious meat from their skewer. 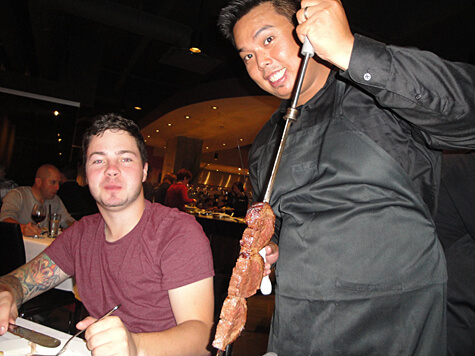 Mike and a chef at Pampa Brazilian Steakhouse. 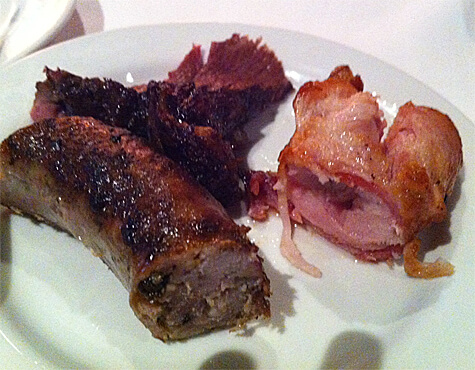 The meat starts trickling in at Pampa Brazilian Steakhouse.

My favourite? The ribeye and bacon-wrapped chicken thigh! Oh my. You cannot go wrong with bacon-wrapped anything. Yummmmmmy. So, we have no complaints about the actual taste of the meats. They were great. We loved it.

Our complaint stems in the fact that we had to wait so long in between pieces of meat… for more meat to arrive at our table. This is where I wonder if our Fogo experience is what ruined Pampa for us – at Fogo, the chefs were literally lined up at our table, one after another, carving us meat after meat after meat. This is not an exaggeration! We had to quickly pop our coloured disc over to red many times at Fogo because as soon as we flipped to green – POP! Instantly – a chef was at our table.

At Pampa? Not so much. Slow, slow meat service. There was too much of a delay in between meat pieces and when we did excitedly look up to see a chef had finally arrived – it was with a meat piece that we had already had (which is fine up to a point – but it would have been nice to have had all the different varieties come out without us having to ask for one specifically).

So that is our biggest complaint and I feel like if you’re going to dine at a Brazilian Steakhouse where they specialize in their chefs coming to your table to serve you all-you-can-eat meat from their skewers and we didn’t get the best experience in that – then there’s a problem, lol. 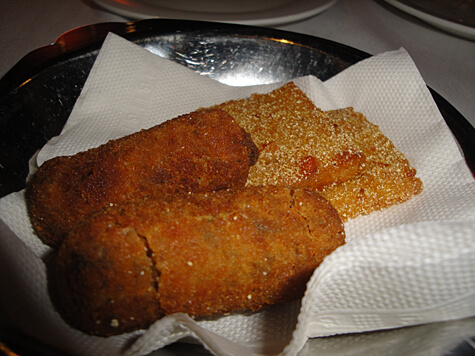 But overall we did enjoy Pampa.

Our dinner comes with polenta and cassava appetizers. I didn’t like the polenta that much when we had it at Fogo but actually I did quite enjoy Pampa’s. I ate it up pretty quickly (Mike didn’t care for it at either restaurant). The cassava was also only okay. Again – our experience at Fogo comes into play. We finished off our first plate of the appetizer and then … like the meat … we waited.

At Fogo – the appetizers included the polenta, caramelized bananas and garlic mashed potatoes. Our servers at Fogo kept refilling our appetizer plates nearly as quickly as the meat kept coming. Perfection. At Pampa? I mean, maybe I was wrong to assume it should have been like that too? Because our server came by several times and our appetizer plate had been empty – and he didn’t offer us a new one. It was only after say the third stop by – that Mike asked if we could have another plate of the appetizers and our server brought us out another. So – meh experience there. 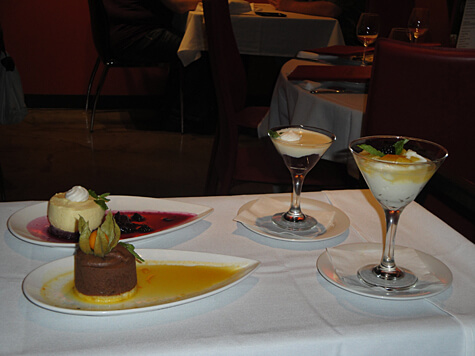 Dessert also is not included in the all-you-can-eat dinner price at Pampa. Still we wanted to go full circle so we ordered the Papaya & Cassis Liqueur which is fresh papaya blended with French Vanilla Ice Cream topped with dijon creme de cassis liqueur. ($12) 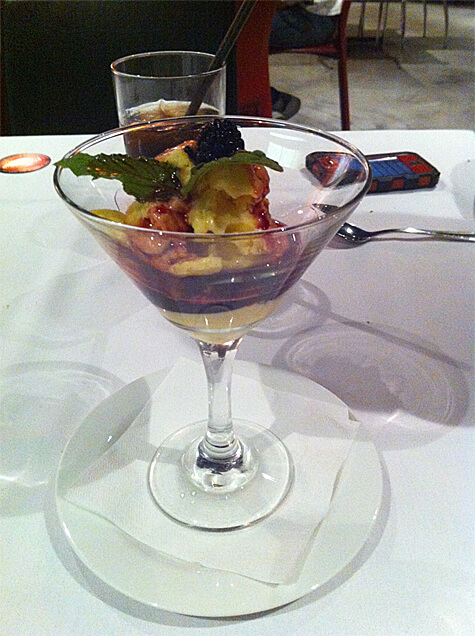 It was very pretty and tasted fantastic – and I’m usually not a dessert fan so that is saying something! 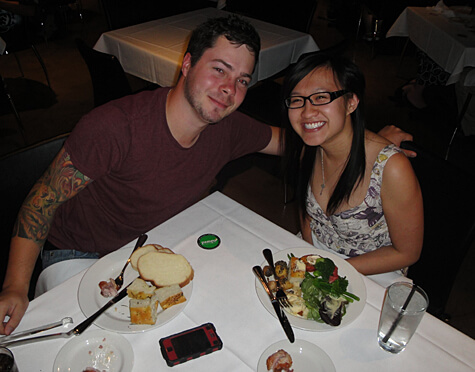 Mike and I at Pampa Brazilian Steakhouse.

Overall, we likely won’t be coming back to Pampa soon or a lot due to the price points and slower than we’d like service, though the concept is very exciting and the food was good – it’s just pricier.

I think if you’ve never been to a Brazilian Steakhouse before, then Pampa will knock your socks off! It’s a great concept and again, who isn’t attracted to the idea of all-you-can-eat meat? Come hungry and leave very full and happy. But when we’ve had it elsewhere – and the service was so much better – it’s hard to be very excited about Pampa.

If you’ve never been to a Brazilian Steakhouse – by all means – start with Pampa since it’s right here – it’s definitely a unique/novelty that you won’t find anywhere else in Edmonton – but if you get a chance to try others elsewhere, do!

UPDATE: I revisited Pampa in June 2015 and the service this time around was exceptional! Check it out here!

So have you been to Pampa?! What did you think??