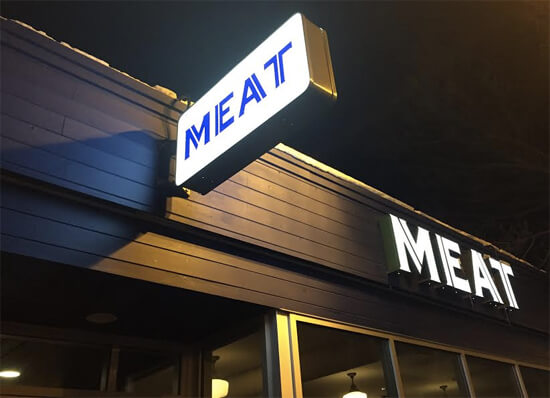 Last weekend I finally tried MEAT for Dinner, a barbecue restaurant just off Whyte Avenue at 8216 104 Street. MEAT opened this past year and is owned by the same owners of The Next Act Pub. MEAT is one of the most recent BBQ spots in Edmonton and is a great addition to the ‘meat scene’ (if you will) in town. 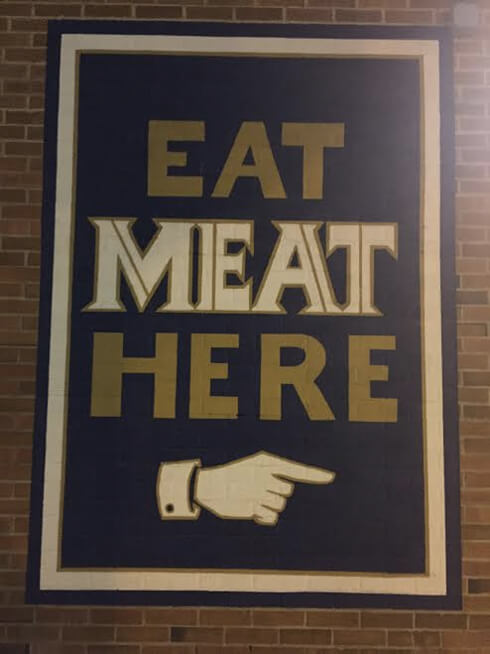 On a Friday night for dinner for four, there was a long, long line-up to get a table at MEAT. In fact, a big chunk of the room after you get through the door is entirely devoted to waiting space and it was full with people waiting when I got there just before 7 p.m. With the big crowd, and the big waiting space, at first I was unsure of where to go to get my name on the wait list. You have to go through the throng of people to get to the hostess station as it’s not right by the door. 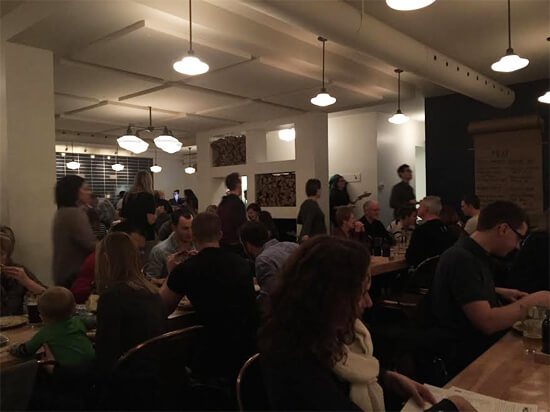 I was told it would be a 30-40 minute wait for a table and my initial thought was… Well I hope it’s worth the wait. Luckily – it was! I really enjoyed the food and the wait actually ended up being shorter than originally estimated. When we were seated, I noticed that our table (and a lot of MEAT’s tables) was just one long communal table separated only by barbecue sauce bottles. You’re sitting pretty close to other parties. 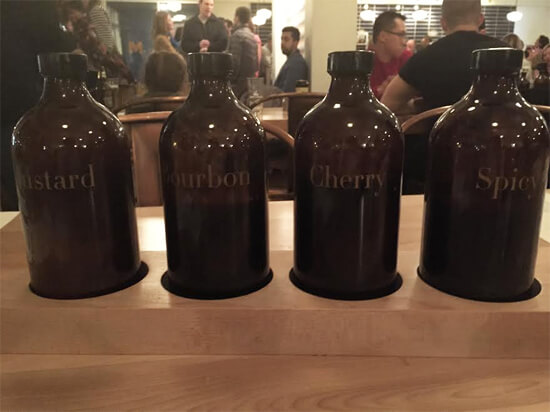 Our server was very friendly, and even got down on his knees to talk to us. He asked if it was our first time at MEAT, if we needed help deciding what to get, and also explained what the feature meat special for the day was (on that day it was apple chutney bacon pork at $9 each – YUM!) 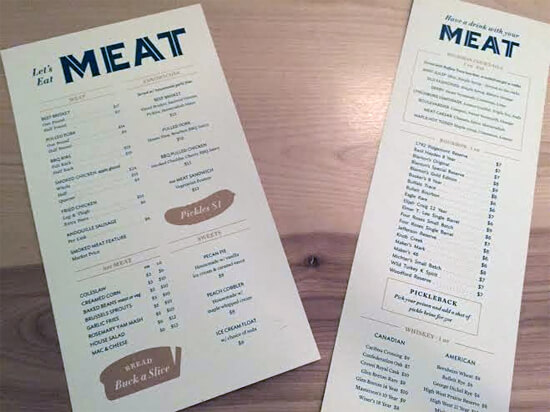 Our table shared a bunch of different meats! That’s generally how you’re supposed to “do” MEAT. They give you all the meat ordered on one big tray to encourage family-style eating/sharing. We tried a pound and a half of brisket ($17 + $11), whole apple glazed smoked chicken ($24), feature (pork, $9), and andouille sausage ($6 per link – about two pieces in a link), and then had the house salad ($6), pickles ($1 per pickle), brussel sprouts ($5 small) and mac and cheese ($6 small) as our sides. 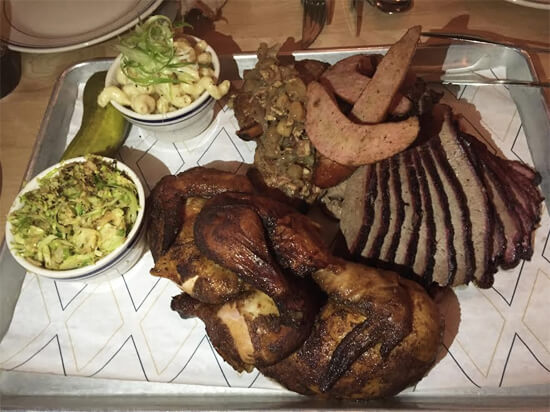 All of the meat at MEAT is smoked for several hours. The pulled pork goes for 14 hours, brisket is 12 hours, chicken and ribs are 4 and the sausage is smoked for 2 hours. MEAT uses 1/3 cherry and 2/3 hickory wood to smoke their meats. I thought the meat was fantastic. My favourite was the feature pork – it was so flavourful, and the apple glazed whole roasted chicken was so tender and included so much. The brisket wasn’t particularly special on its own, but with any of the meat you get four homemade sauces to choose from – mustard, cherry, bourbon and spicy, so adding a bit of that to the brisket (and the other cuts) brought it up to a whole ‘nother level. All of the sauces were great but the stand-out for me was the cherry BBQ. It brought the perfect amount of sweetness to the smokey meat. 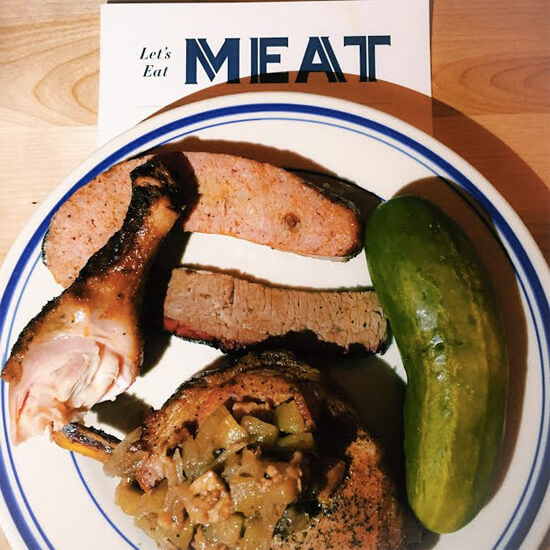 Fun facts about MEAT: They fill their smoker with over 700 lbs of meat every day and there is ‘minimal’ seasoning on the meats because they use the smoke as the ‘flavour maker’ (this is cool, but also runs the risk of some of the meat like the brisket not having a whole lot of flavour if the smoke doesn’t penetrate it enough).

Another fun fact: I’m told the dress code for the ladies at MEAT is stripes or polka dots, which I think is much more fun than your standard black uniform. 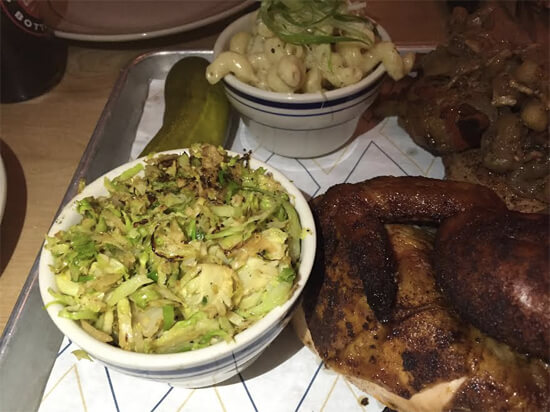 Brussel sprouts, mac and cheese, and a pickle at MEAT.

The sides are really good. I think it’s a bit crazy one pickle is $1 but the pickle is really necessary to balance out all the meat and it’s a really tasty pickle. I loved the brussel sprouts (I’m a fan of brussel sprouts usually though) and my friends Rachel and Sam who had the mac and cheese thought it was great. They also enjoyed their sodas and our friend Taylor really liked his bourbon and beer. MEAT has an extensive bourbon and drinks menu. They also have fun sodas, and (surprisingly) have a vegetarian feature option. 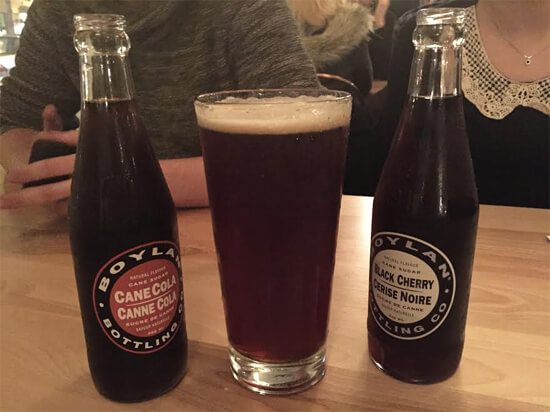 Sodas and beer at MEAT.

MEAT has a great (and busy) atmosphere – especially on a Friday night. They don’t take reservations so expect to wait. I’d like to try it during the daytime when it’s nice out – and there’s natural light coming into the space. The inside walls are all beautiful blue with white accents but I couldn’t see any of that detail at dinner. Look at the photo on their website, it’s a gorgeous room and definitely unique/different from what you normally see in BBQ restaurants.

We didn’t have dessert but my social media followers were raving about the pecan pie so when I return, the pie’s on my to-try list for sure!

I’m no BBQ expert but I really enjoyed MEAT. It’s a great addition to the Whyte Ave./Old Strathcona food scene, and an even better addition to the current Edmonton BBQ scene. The food came out in good time (even with how busy it was) and was really tasty, our server was helpful, I thought the price points were pretty good (on par with other BBQ restaurants), and overall, I would say that the wait was definitely worth it!

If you’re a carnivore like me, you have to try MEAT for dinner! The slogan on their outside wall ‘EAT MEAT HERE’ is extremely appropriate. You’ll get meat sweats and you’ll love it.

Linda Hoang is a Canadian blogger based in Edmonton, Alberta, who writes about travel, food lifestyle and pet topics. She's also a seasoned social media/digital strategist with a journalism background. Linda loves exploring the world with her husband Mike, eating their way through cities, supporting local businesses, and photographing Instagrammable Walls. She is the founder of the Edmonton International Cat Festival and a fur-mom to two cats and two dogs.
PrevPreviousAlberta Primetime Pop Culture Panel (December 11, 2014)
NextSocial Media Notes (#52) – Links for the Week of December 8 – 14Next