I bet when you read “Tupperware” in the title of this blog post, some things immediately came to mind. Like, tupperware? Oh, food storage containers that take up all that room in my cupboard. Or, tupperware party? So I watch someone talking about Tupperware before having to buy?

When my friend Michelle Bootsman reached out and asked if I’d want to check out her Tupperware Meal Prep Party, I was really interested to learn what it was all about.

Basically: a Tupperware Meal Prep Party is a new twist on the classic home Tupperware party. Instead of watching someone else demonstrate tupperware though, you’re instead put to work prepping five meals (for 2-4 people) in tupperware containers you get to take home with you. It’s a totally relevant type of party today, when everyone is so busy and looking for quick, easy and healthy meal options.

Read on for a recap of my experience at Michelle’s Tupperware Meal Prep Party at Team Builder Sales Tupperware Studio in St. Albert, and enter to win a Free Meal Prep (valued at $131.25). 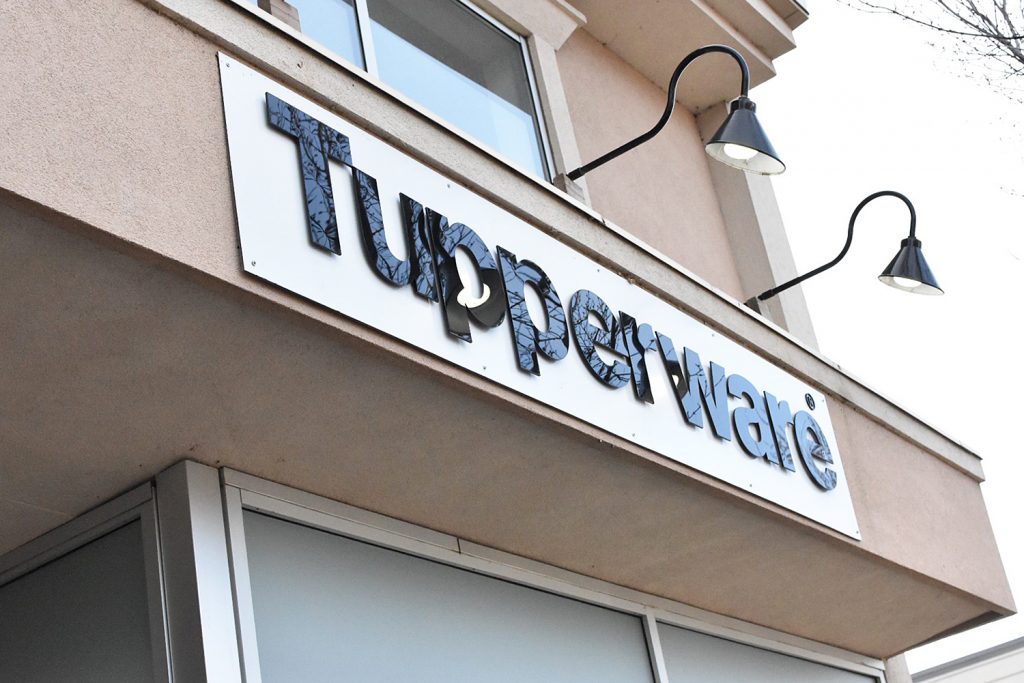 The Tupperware Meal Prep Party I attended took place at the Tupperware Studio in St. Albert (100 Perron Street). Tupperware studios are a pretty new concept (only having really started to pop up in 2014), and the meal party aspect is even newer.

For $125 (+ GST), you get to attend a Meal Prep Party and take home 5 meals that feed up to 4 people (or I think, 2 very hungry people). You also get a $25 shopping credit for any Tupperware purchases you might want to make after the prep, and you get take-home Tupperware containers! Plus there’s some Tupperware giveaways too, so your chances of taking home a ton of free Tupperware is pretty good.

All of the groceries are purchased by a Tupperware Meal Prep consultant (mine was Michelle), and all of the prep/recipes are printed at different stations around the studio (you get take-home recipe sheets too). Mostly all of the prep work is done, depending on how large a group you’ve got, it’s really not intensive prep. You also get wine and appetizers as part of the evening, and the wonderful feeling of not having to clean up after yourself in the kitchen, lol. 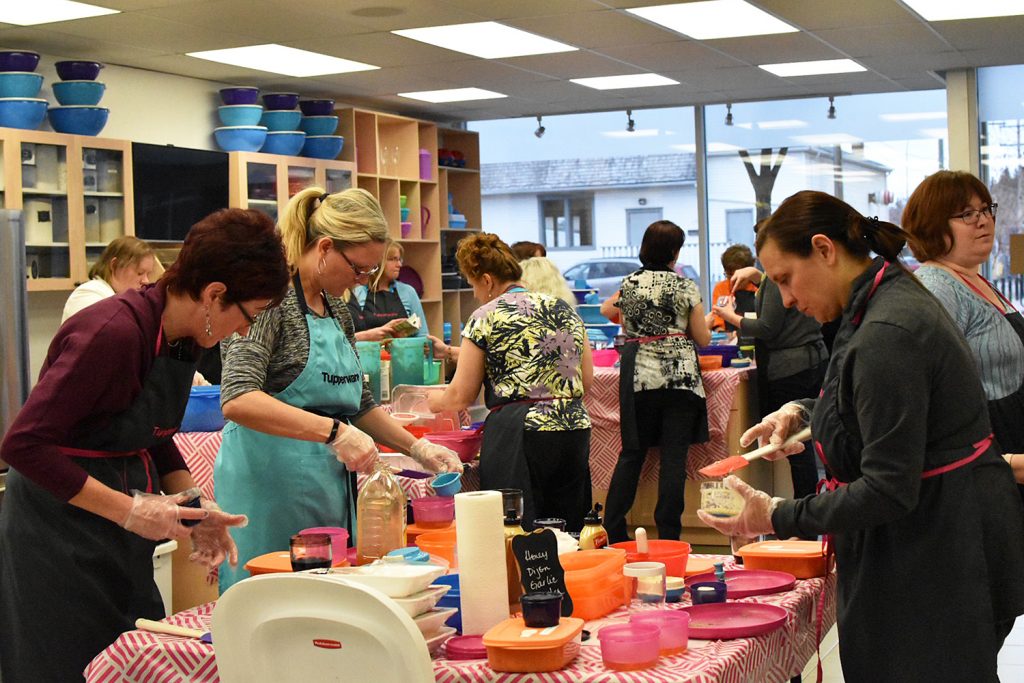 About 20 people were at the Tupperware Meal Prep Party I attended last week. 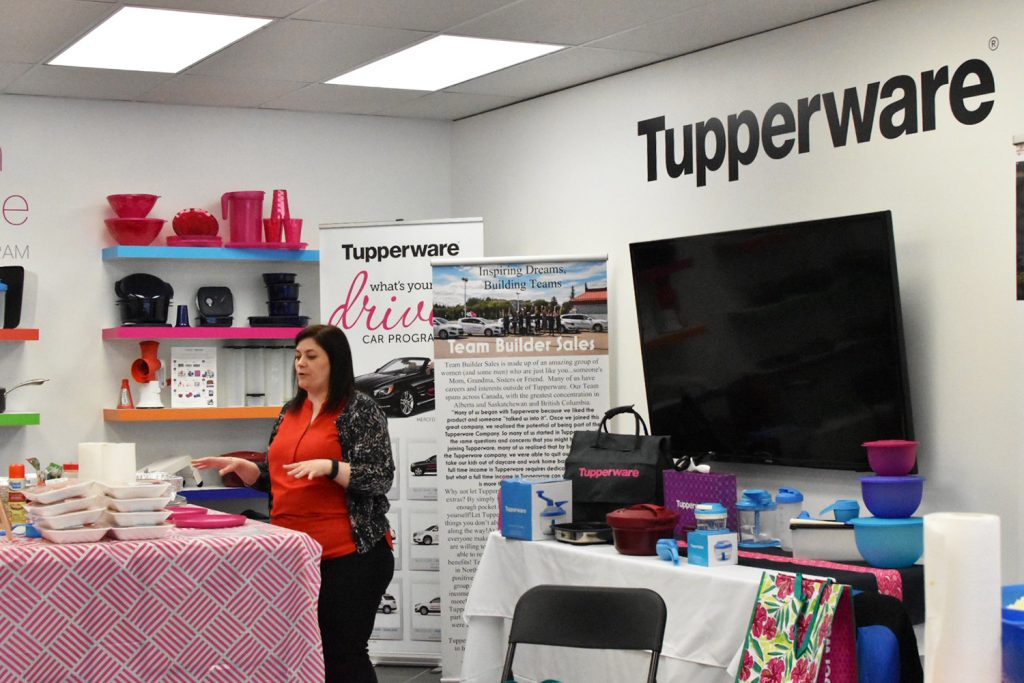 Tupperware consultant Michelle explaining how the night is going to go. 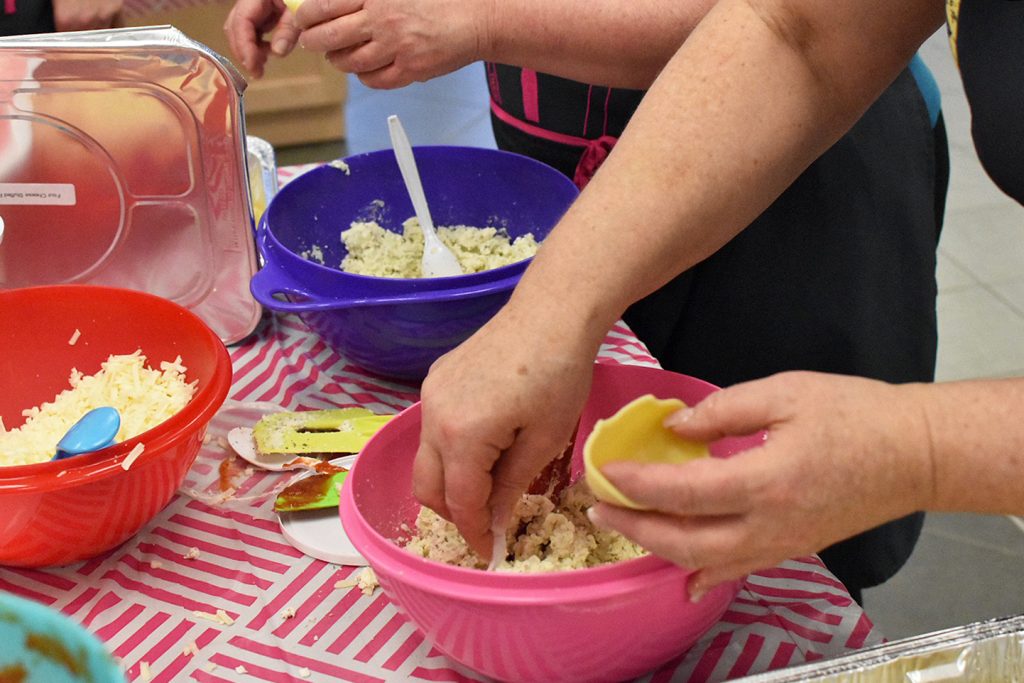 They are really simple and tasty recipes. If you end up hosting a Tupperware Meal Prep Party, you’d work with your consultant to decide what recipes the group is going to make! They currently have about 30 recipes that you can choose from. 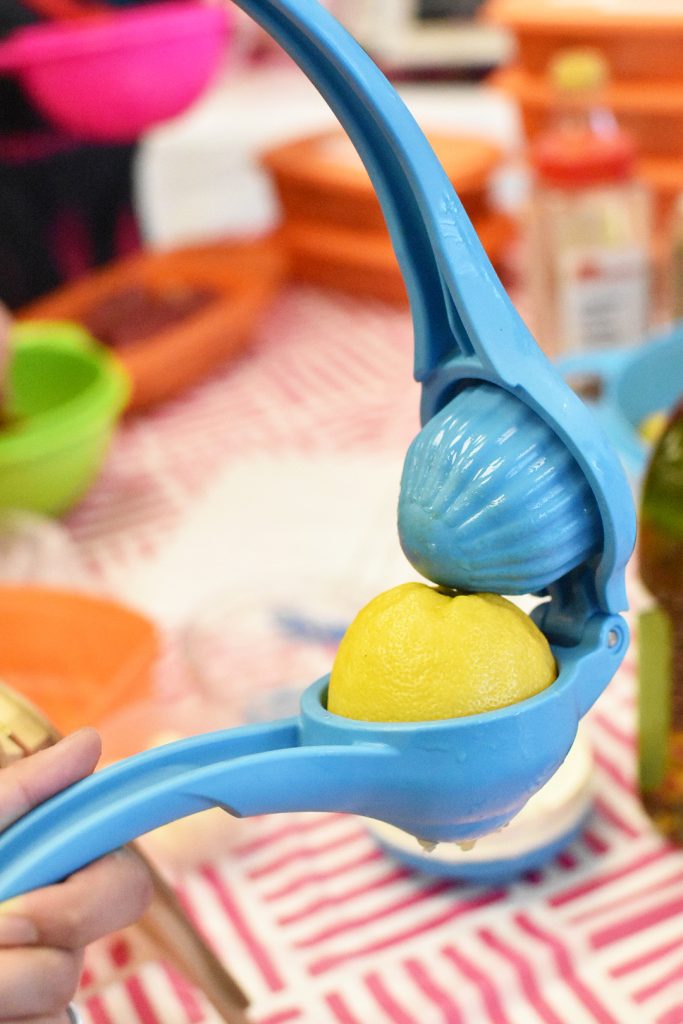 Pretty cool Tupperware juicer! (And yes, that is the right way to juice it!)

Tupperware has been around for more than 70 years (wow!) The product has come such a long way since it was first invented, and especially in the last 10 years, it’s really evolved.

Most people (myself included) think Tupperware is just about the bowls and storage, but when we’re talking about evolving to meet the needs of consumers, really Tupperware now has a ton of products intended to make it easier to cook – products that make it easier to create and store easy, simple, healthy meals.

Jo Ann asked the group whether they used a product during the meal prep that night that people didn’t realize Tupperware had and everyone raised their hand. (I didn’t know about the amazing Tupperware Chop N Prep, seen above).

It was really fun and interesting to learn about how Tupperware has evolved over its many, many years. As Jo Ann put it:

“Everyone knows what Tupperware is, but they don’t know what it is recently.”

Zester and chopper aside, Tupperware apparently also has a pressure cooker that acts like a slow cooker in a microwave. You can cook a frozen chicken breast in 20 minutes in the microwave using the Tupperware pressure cooker. You can also cook a hearty Mac ‘n Cheese from raw pasta to finish in 10 minutes. (Say whaaat). 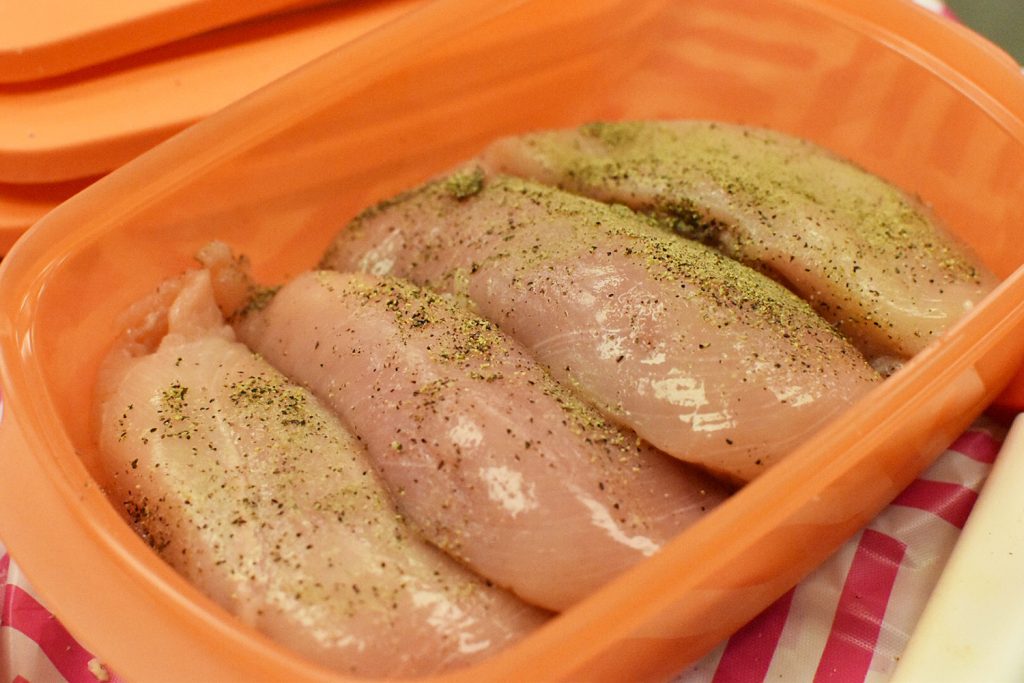 Tupperware is a direct sales company, which are becoming really popular lately (but make no mistake – Tupperware was basically one of the very first direct sales companies). Direct salespeople primarily make their sales through hosted parties and one-on-one demonstrations. After they’ve got you really excited with the product, you order through a consultant or representative.

I think because they are so common now, it might give them a bad rap (if I get invited to one more Stella and Dot party….) but the differentiator with the Tupperware Meal Party is that you’re basically paying in advance to secure your grocery + meals, and the whole Tupperware discussion and use of Tupperware products in the process, is just kind of a nice underlying message, but what I was really interested in is the fact that you’re doing an interactive, involved activity that results in some take-home goodies, rather than the more standard, passive product demonstration that most of these sales companies deliver. 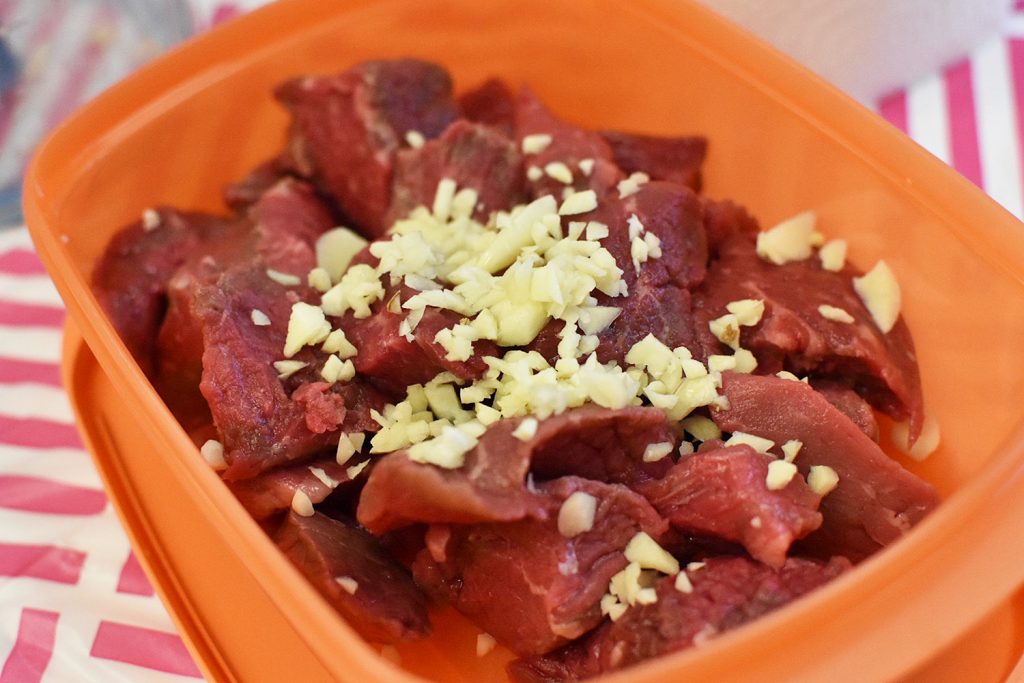 Michelle has a long history with Tupperware too – she’s been an consultant on the side (she’s got a full-time job too!) for 20 years, but the Meal Prep Party aspect is new to her as well. So far, she’s only organized about 5 of these types of parties, but obviously wants to do more.

These are pretty affordable and convenient ways to get meals ready to go for your busy lifestyles. I always see people posting photos about their meal prep and it looks great. This Tupperware Meal Party makes that whole concept one step easier because someone else is organizing all the groceries and recipes for you! lol. 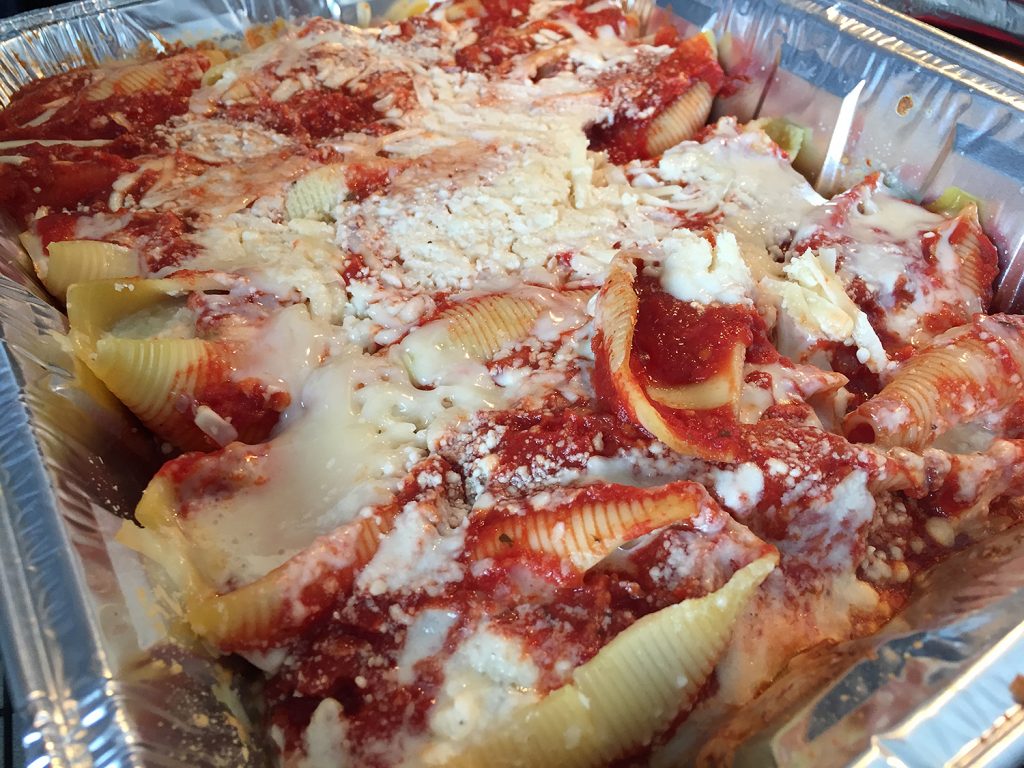 That night, most of the ladies in attendance were friends so it really was like a big party for them. That’s really the whole idea. Yes, from the consultant’s side, they hope that the people who attend these parties will purchase Tupperware through them and possibly ask to host a Tupperware Meal Prep Party themselves.

But from an attendee perspective, I can totally see the appeal to hosting or attending a meal prep party (Tupperware or not). It’s just a casual, fun night putting together some meals with your friends. That’s why I signed myself up to host a Tupperware party for July (as part of my birthday month of activities!) No, I haven’t drank the Tupperware Kool-Aid and am now trying to push Tupperware on people, but I really had a great night. I had enough meals prepped to feed me for a week after the fact and I mean you can’t say that Tupperware products aren’t quality products.

Plus, I love how colourful they are!

I think it would be really fun to hang out with my friends, prep some meals, and take home some new Tupperware. 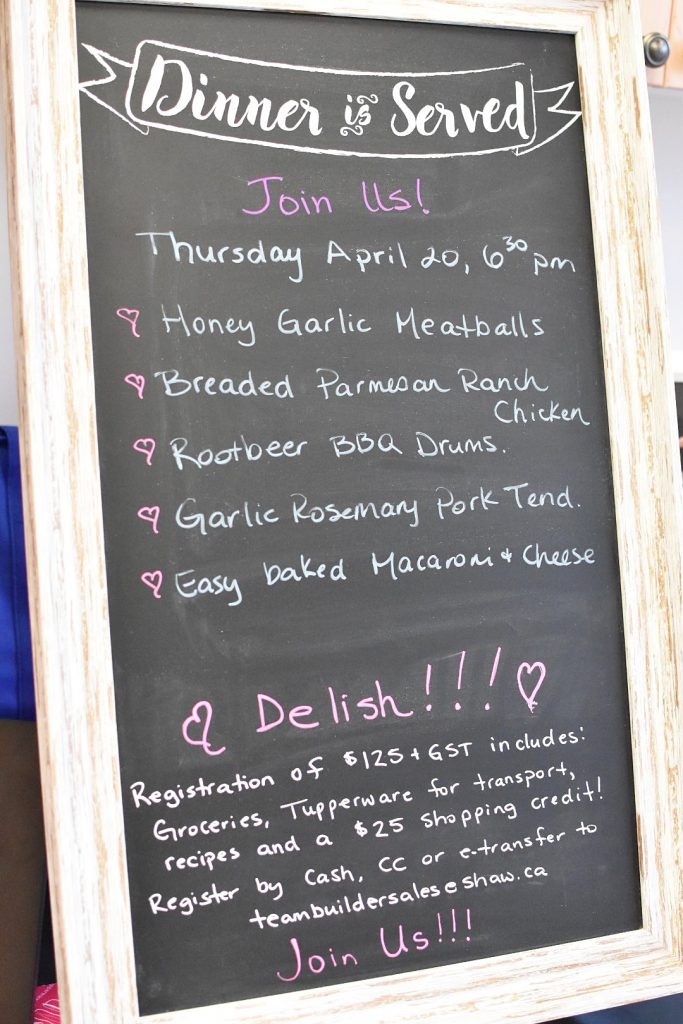 The only thing I didn’t totally like about the meal prep was that the meals you prep are primarily the proteins of your meal – it doesn’t include what your side dishes would be, so it’s not in theory a full meal you’re prepping.

The other thing you might be wondering is why some of the dishes we prepped aren’t in take-home tupperware containers. There are good-for-the-oven Tupperware products out there, but they are a bit pricier, so the cost of the Meal Prep Party would have to rise quite a bit to make up for giving away those higher end Tupperware products. All good though, I still went home with quite a few new pieces of Tupperware! 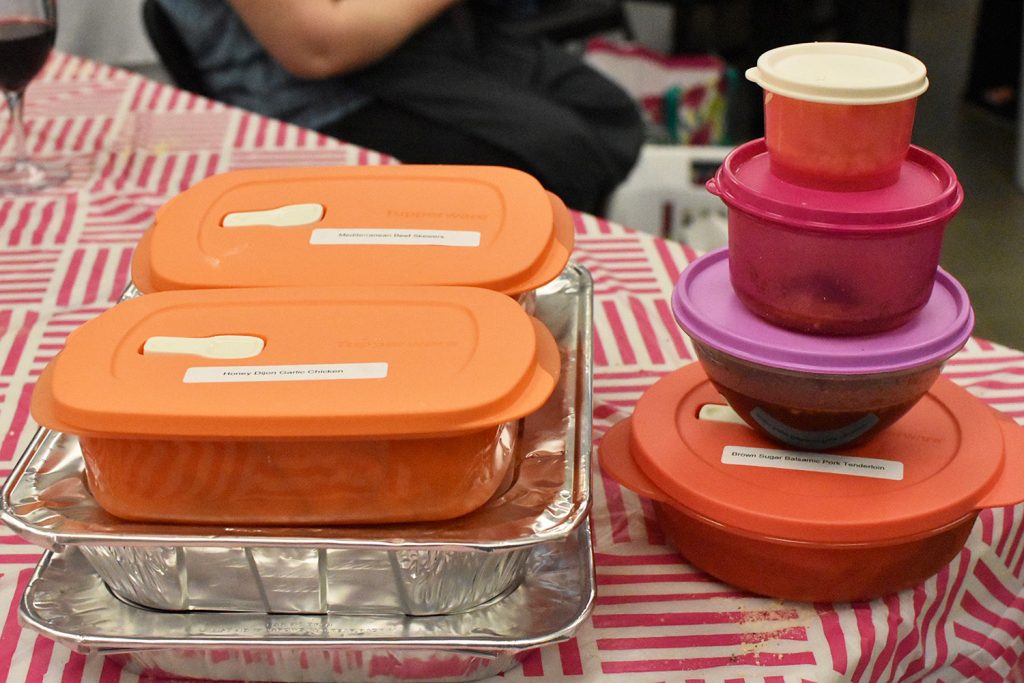 By the end of the night, I’ve got lots of goodies to take home!

I’m grateful to Michelle for inviting me out to see what a Tupperware Meal Party is all about and I’m looking forward to hosting my own party in the next few months. In the meantime, I’m giving away a free pass to one of Michelle’s next Tupperware Meal Prep Parties so you can see what it’s all about too! Details on how to enter below:

There are a few ways you can enter for a chance to win a free pass to a Tupperware Meal Prep Party (valued at $131.25) including:

Note: I’ll add entries from comments on my Facebook and Instagram posts individually from the widget. Also note that comments are moderated so if yours doesn’t appear right away, that’s normal! Also, you can tweet daily!

Disclaimer: I will always provide my 100% honest opinion on this blog. I was invited by Tupperware consultant Michelle to try her Meal Prep Party, so my meals were complimentary. This has no impact on opinions stated in this post.

Linda Hoang is a Canadian blogger based in Edmonton, Alberta, who writes about travel, food, lifestyle and pet topics. She's also a seasoned social media/digital strategist with a journalism background, the founder of the Edmonton International Cat Festival and co-founder of Stop Race Based Hate, an online anti-racism education tool. Linda loves exploring the world with her partner Mike, eating their way through cities, supporting local businesses, and photographing Instagrammable Walls. Linda is a fur-mom to two cats and two dogs.
PrevPreviousPreview: Dog Days of May at the Fairmont Jasper Park Lodge! (Discount Code)
NextReview + Giveaway: Crash Hotel Lobby BarNext