When I was younger, I used to spend a lot of time in the mall arcades with my brothers. I have really fond memories of playing different games and watching my brothers play theirs. We would spend hours at the arcade.

Those kinds of arcades and entertainment centres have become harder to come by over the years, which is why I was pretty excited for The Rec Room to open in South Edmonton Common!

The Rec Room (which opened in September) is a two-level, 60,000-square foot dining and entertainment centre. It’s really slick.

Read on for my review and at the end of the post, enter to win a $25 gift card and game credits! 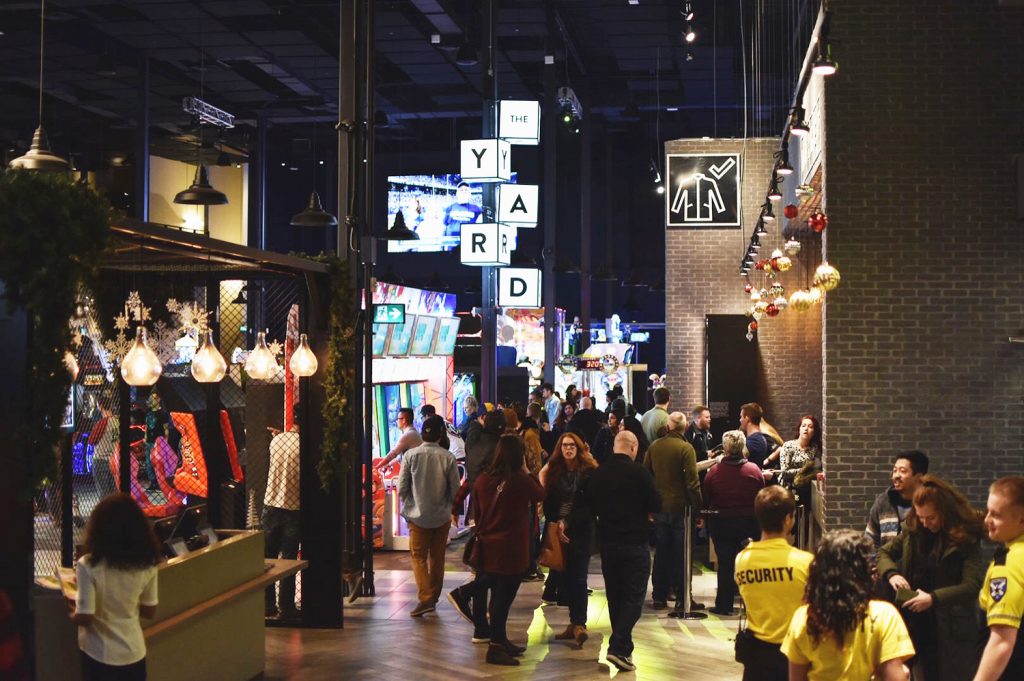 The place to be on a Thursday night.

This Edmonton location is the very first Rec Room to open in Canada.

Part of the Cineplex brand, The Rec Room includes three restaurants – an upscale casual restaurant, a pizzeria, and a quick service poutine and custom donut bar, and 10 private dining rooms (for all of your future birthday parties!). 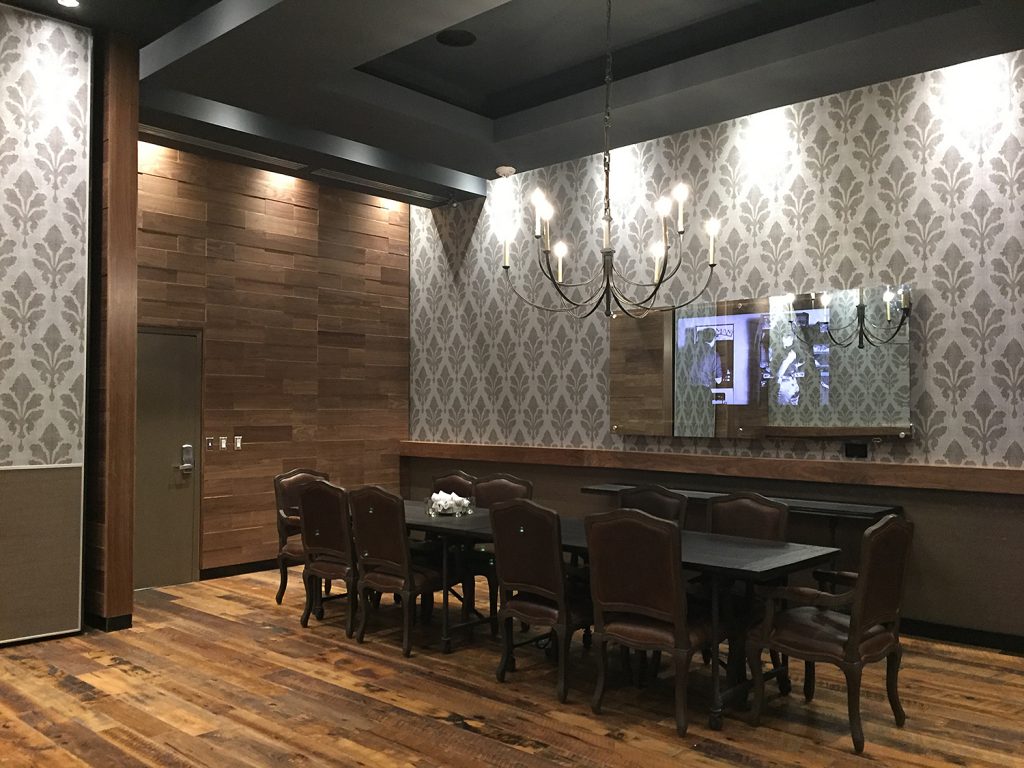 Private room for parties at The Rec Room.

There’s The Yard – with more than 100 amusement games that you play with credits and earn points that can be redeemed for prizes (ah, nostalgia!), different stages for live musicians, comedy and karaoke, non-arcade or amusement park games like bowling, pool and axe-throwing, along with tons (120) screens to watch all sorts of sports games!

Not to say kids and families wouldn’t have fun here either, it really does seem to have something for everyone. 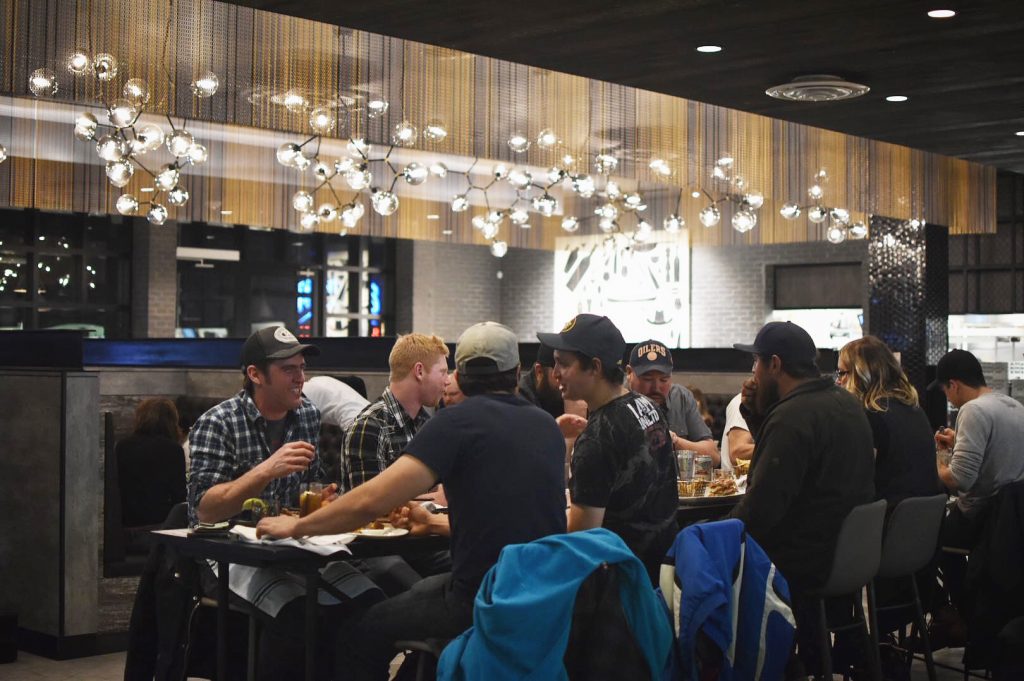 Busy night at The Rec Room.

We were invited to try the food at The Rec Room’s main floor dining option Three10 Restaurant, and we really enjoyed our meal.

Some of the dishes we had included: 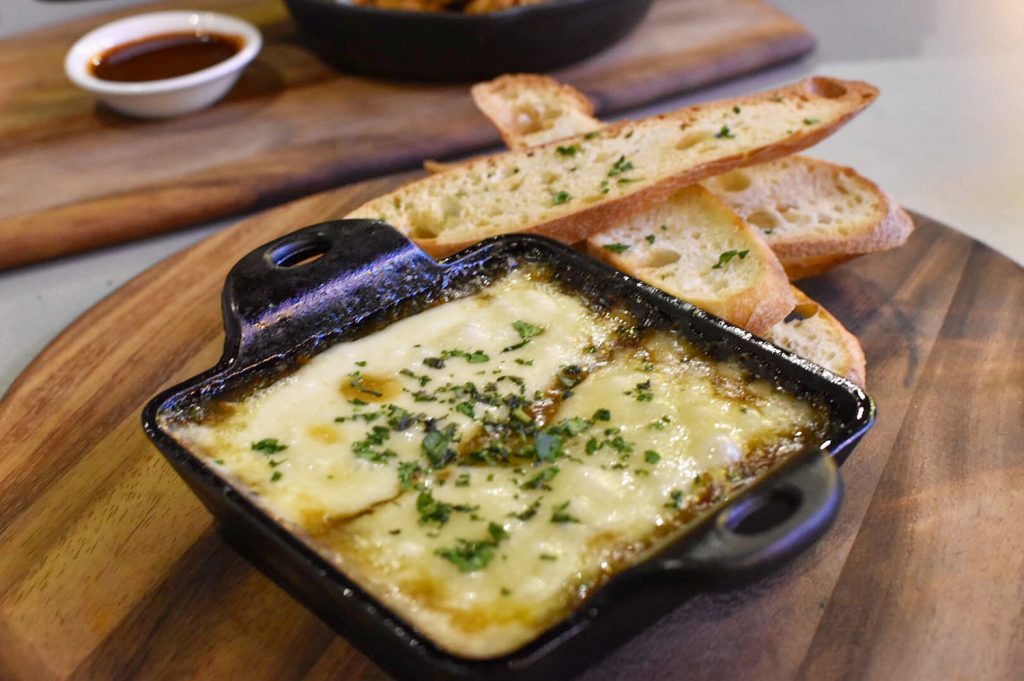 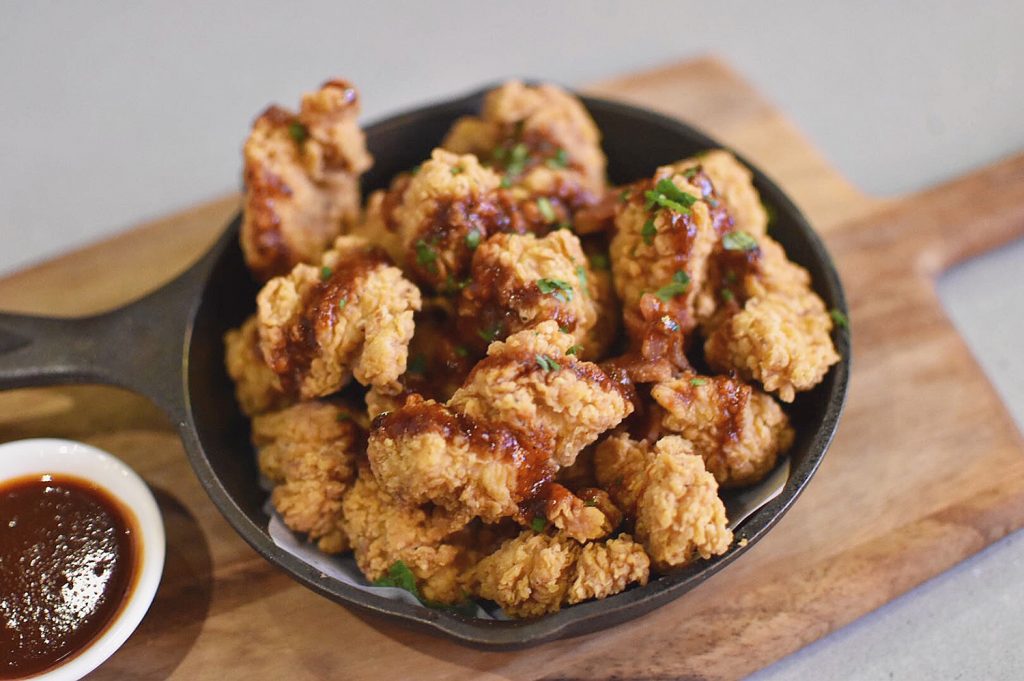 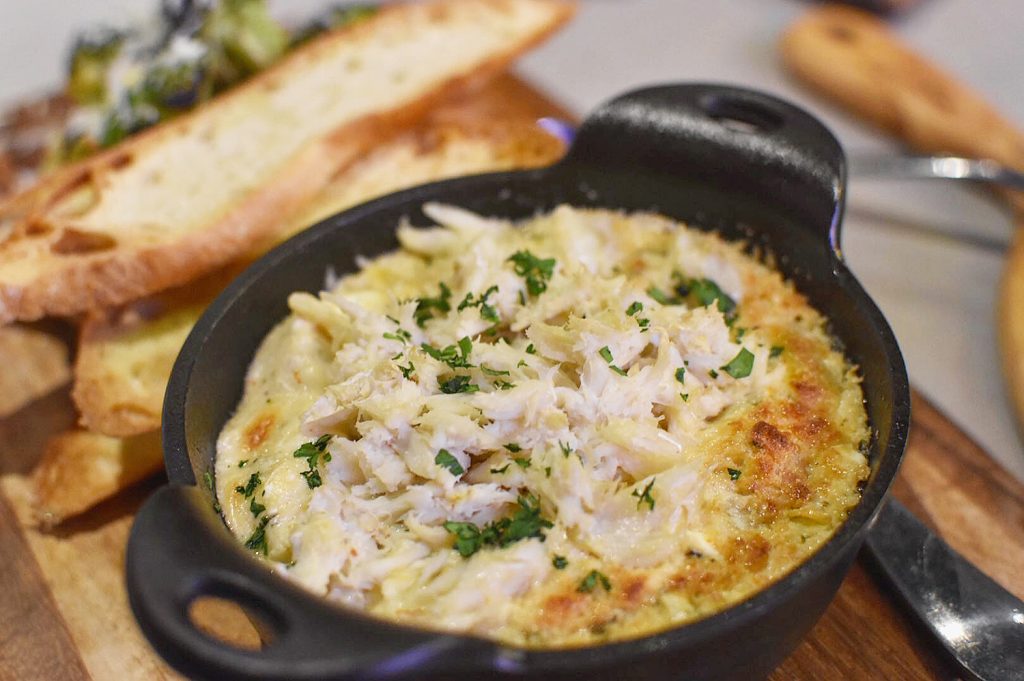 Crab and Artichoke Dip with Parmigiano, Wood-Grilled Broccoli and Crostini ($13) at The Rec Room.

Crab and Artichoke Dip with Parmigiano, Wood-Grilled Broccoli and Crostini ($13) 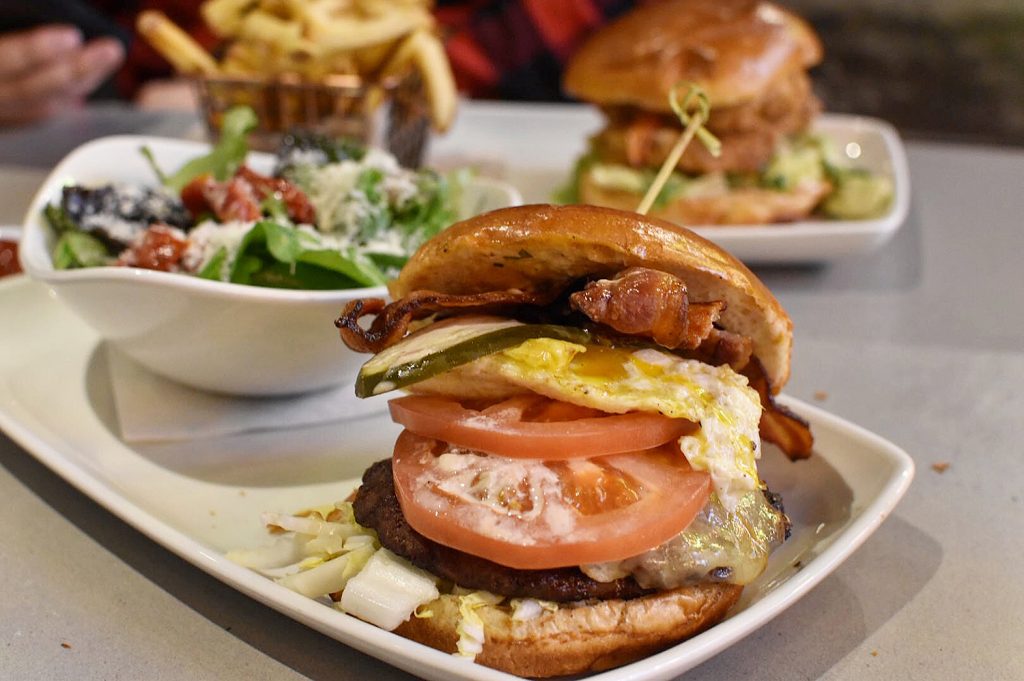 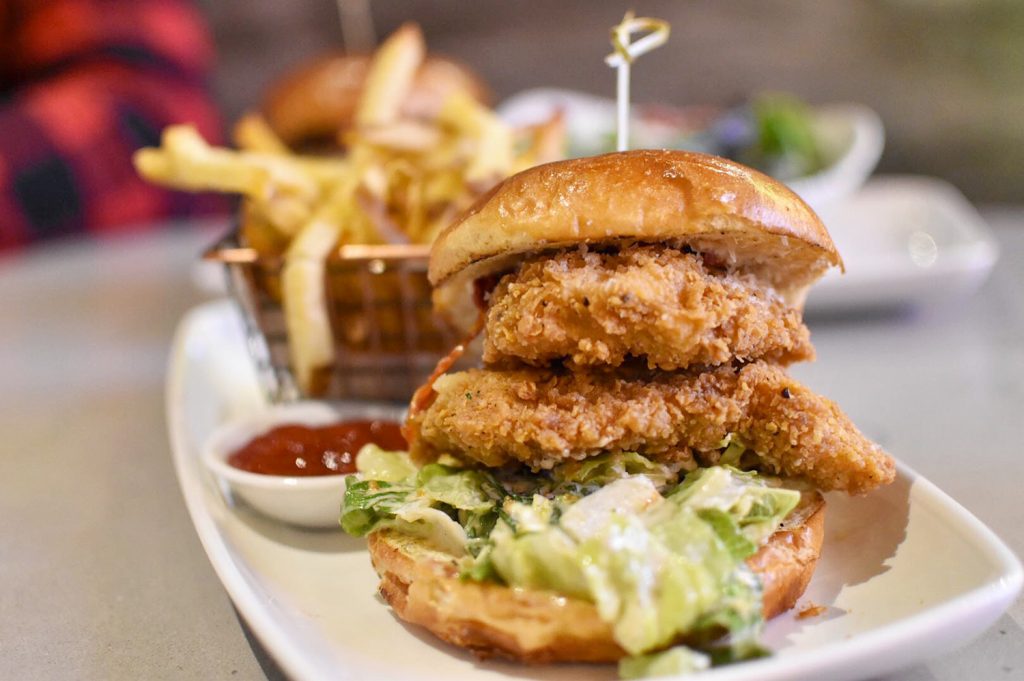 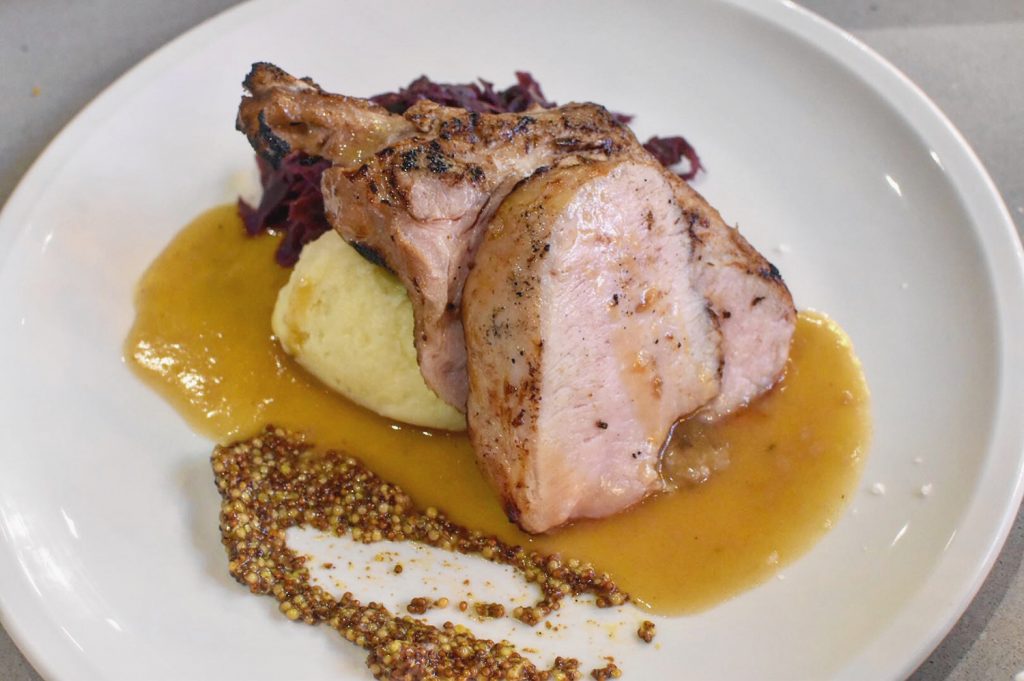 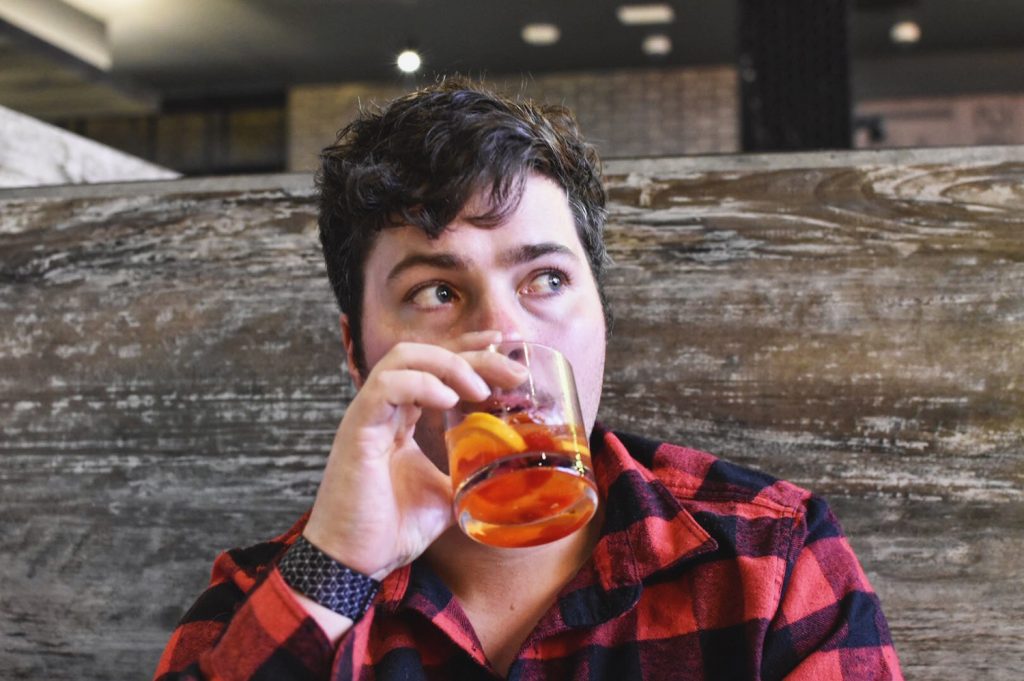 Mike enjoying his New Fashioned at The Rec Room.

They have lots of different cocktail options (the Strawberry Basil Lemonade is great!), six draught wines and over 20 draught beers, including local craft beer! 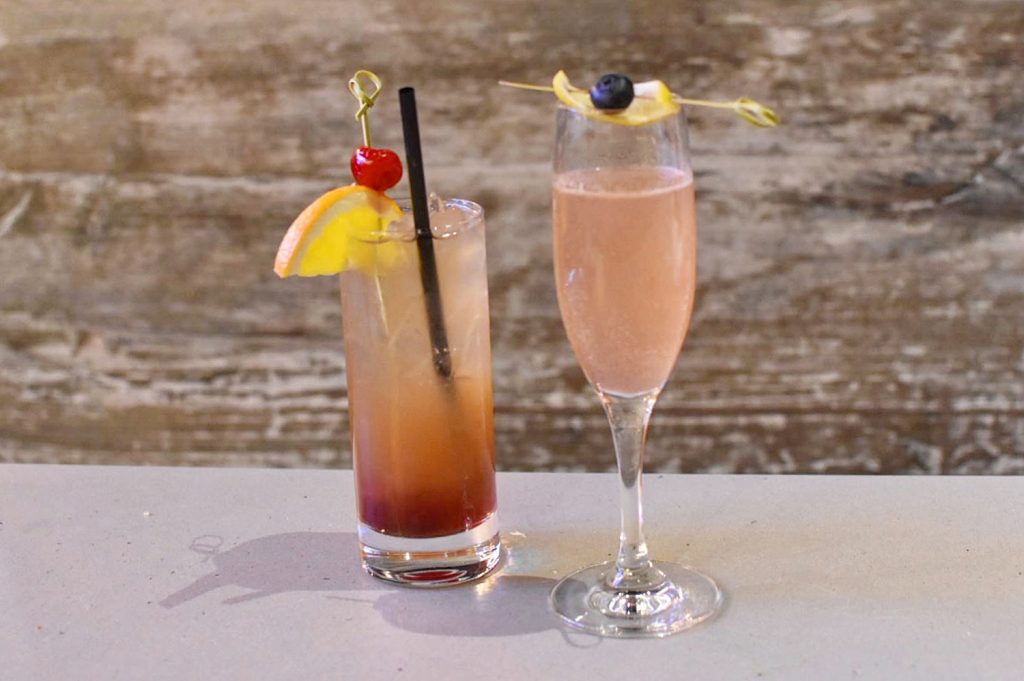 Draaaanks at The Rec Room!

On Opening Night, we also tried some of their poutine creations at The Shed!

I always prefer my fries skinnier and crispier (even though I totally understand that’s not standard type of fry cut for poutine) so I didn’t love these but I did enjoy the fun toppings. 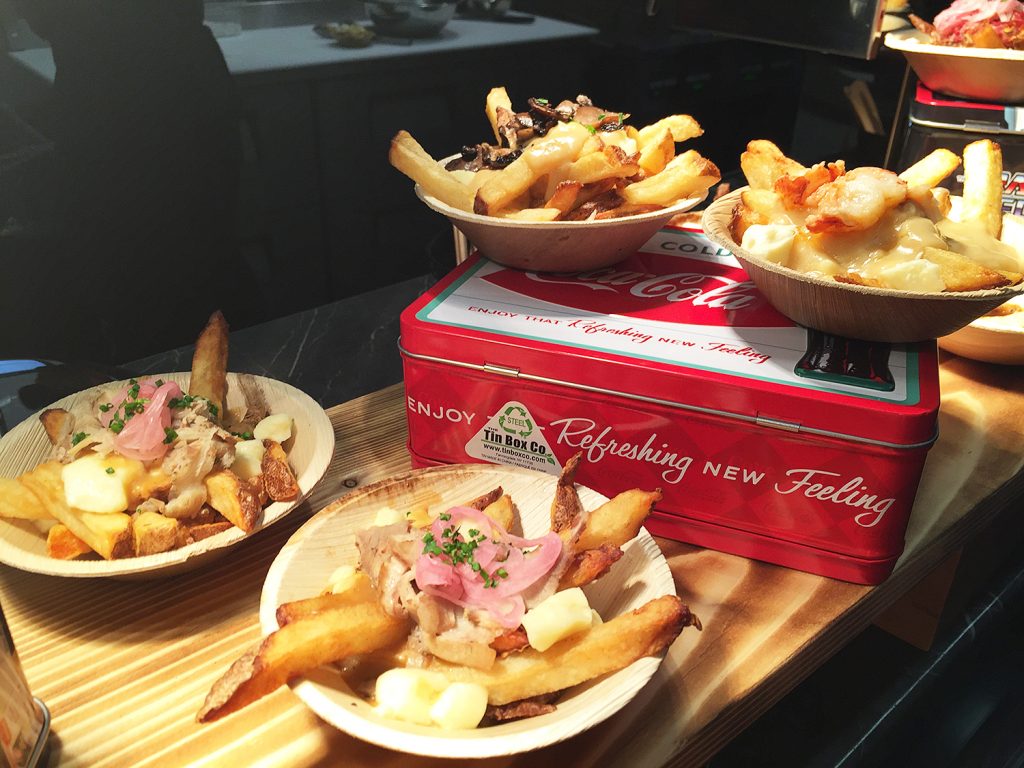 So many poutine options at The Rec Room!

The restaurants try to source local ingredients wherever possible and make as much dishes and components fresh and in-house as they can, which is great. And I like how many options there are.

If you just want a burger, you get that. Poutine and donuts, got it too. Pizza? Check. Variety of appetizers – yup. More serious entrees (steak, pork chops, salmon) – there’s some of that as well.

All-in-all, we think The Rec Room is a pretty fantastic and already proving-to-be-popular concept in our city.

It was unbelievably busy both times we went (granted, one night we went was the official grand opening). 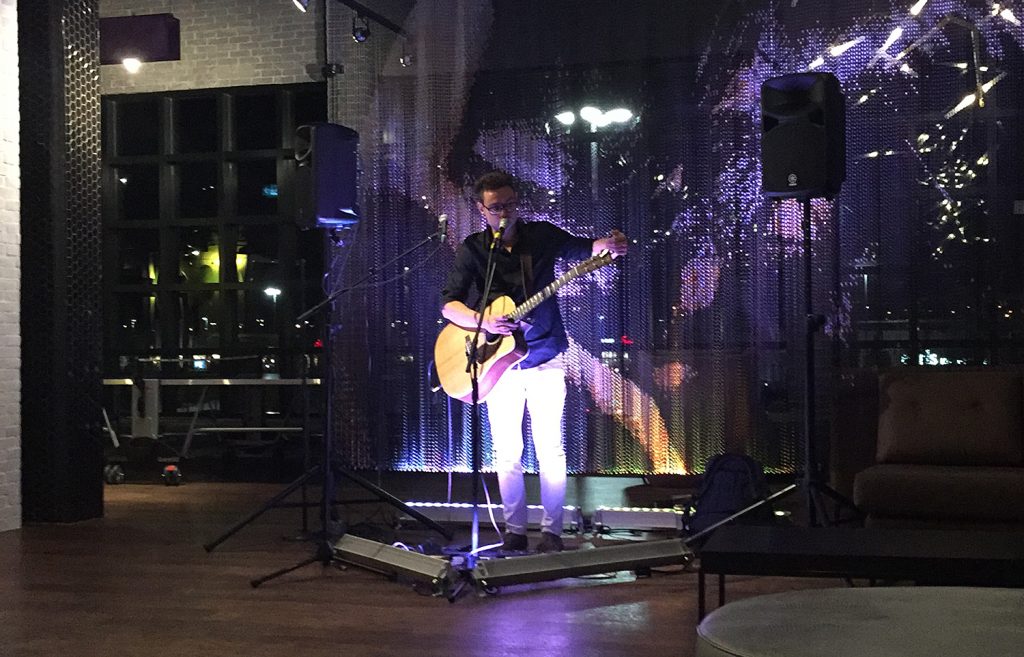 Live entertainment at The Rec Room!

Mike has had so much fun during both visits that he’s already planning his birthday at The Rec Room!

Our good friend Lisa and her husband have also basically been to The Rec Room every week since it opened. They’re big fans – and say it’s lots of fun not just as date nights, but also as bros nights, girls nights, and big-friend-group-night. There’s really so much to do without getting bored (check out their event listing!). Lee even held his company Christmas party at The Rec Room!

In terms of improvements, both times Mike and I went, we had excellent and very attentive service, but Lisa and Lee have found in some of their visits, some staff seemed more knowledgable about the various offerings than others. Lisa also wanted me to add in this post that she’d love if there were deal days for games and regular week day deals. 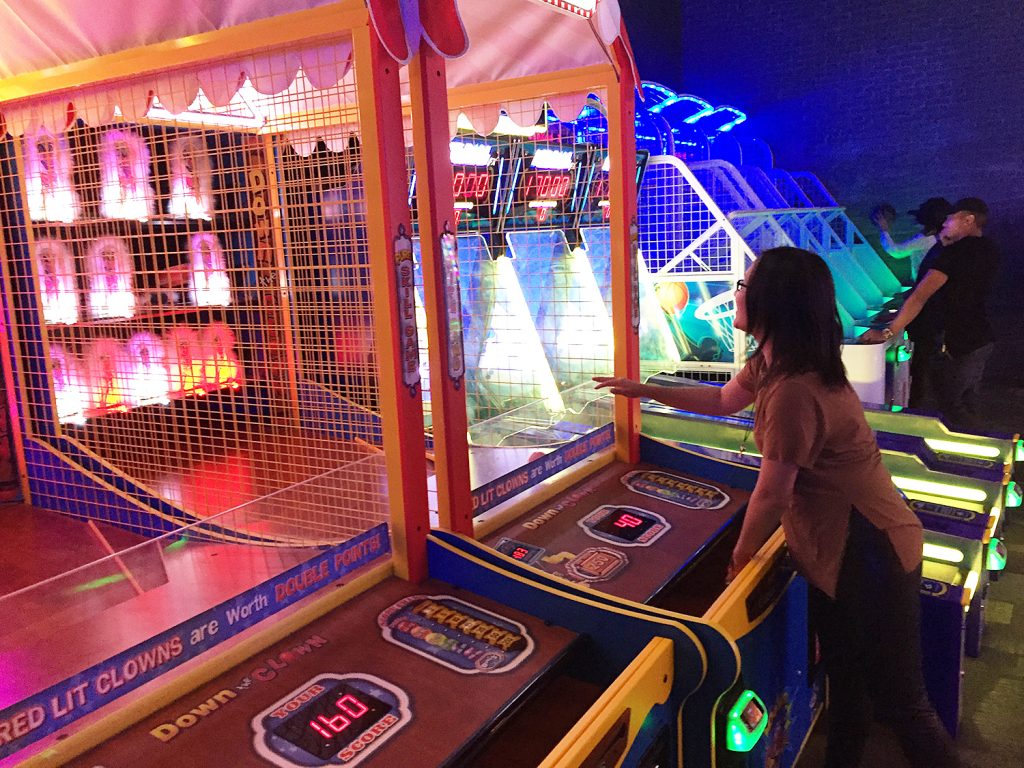 Playing games in The Yard.

There are plans for 10-15 more The Rec Room locations to open across Canada in the next few years. A second Edmonton location (West Edmonton Mall), Calgary, and Toronto are coming up next! (I think the Cineplex team is predicting this concept will be a hit across the country and they’re probably not wrong).

I do want to note that since our last visit (late November), it looks like there was some type of mechanical issue in their kitchen and they’re operating on a limited menu until mid-December. Something to keep in mind in case you were hoping to try particular dishes I’ve mentioned here!

But overall, we’re fans of The Rec Room. It’s super lively, offers a lot of different things for a lot of different people, has a good selection of food and I think it’s cool this is another venue for local live music and comedians to perform.

Mike is serious about having his birthday there, but we’ll also likely be back before then too! 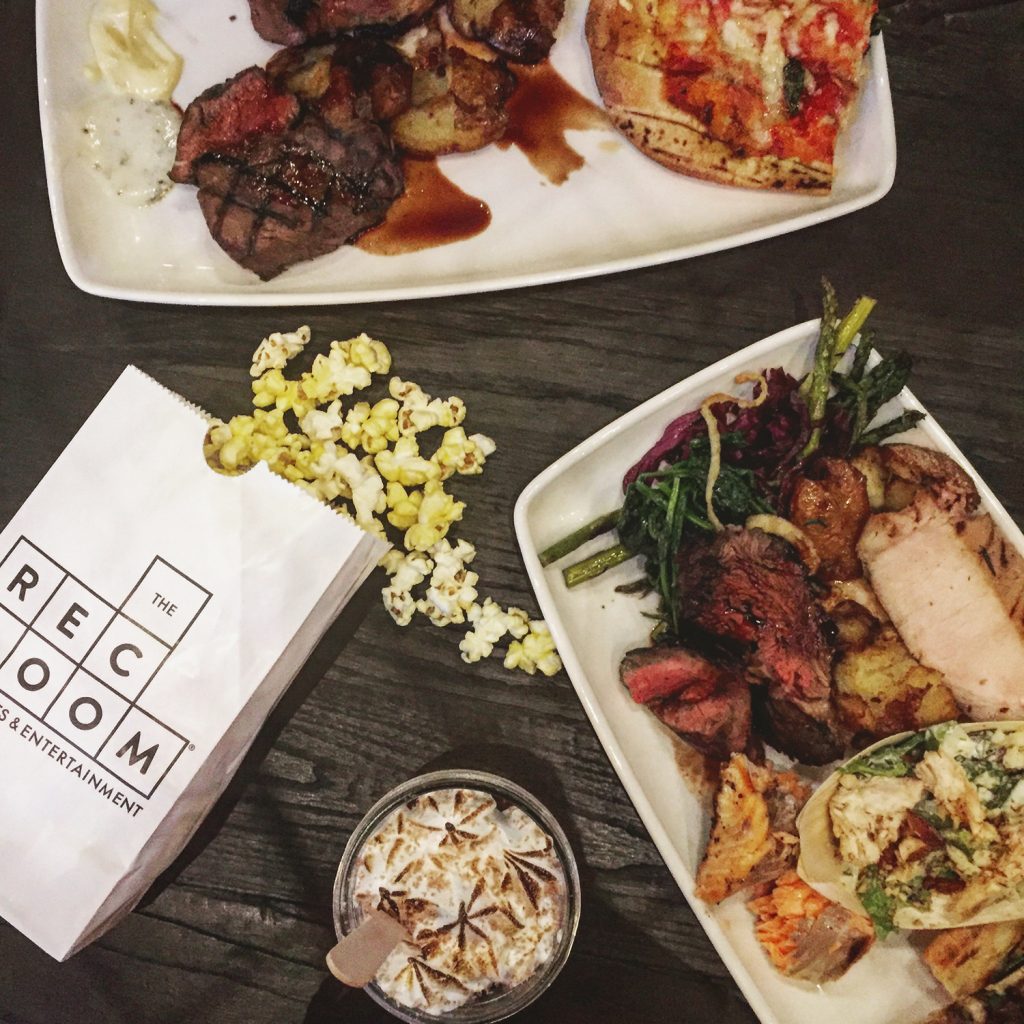 Complimentary popcorn and some tasting items at The Rec Room (this was on their grand opening night).

There are a few ways you can enter for a chance to win a $25 gift card and game credits to The Rec Room, including:

I’ll select a winner when the giveaway closes on December 18, 2016.

Disclaimer: I will always provide my 100% honest opinion on this blog. The Rec Room reached out to see if I would be interested in trying their food and games in exchange for a review and giveaway to readers. This does not affect the opinions stated in this post. (I wouldn’t say I liked it if it didn’t!)

Linda Hoang is a Canadian blogger based in Edmonton, Alberta, who writes about travel, food, lifestyle and pet topics. She's also a seasoned social media/digital strategist with a journalism background, the founder of the Edmonton International Cat Festival and co-founder of Stop Race Based Hate, an online anti-racism education tool. Linda loves exploring the world with her partner Mike, eating their way through cities, supporting local businesses, and photographing Instagrammable Walls. Linda is a fur-mom to two cats and two dogs.
PrevPreviousA Dinner with Russell Bird: World Food Championships’ Bacon Chef
NextReview: Me 2 Japanese Sizzling RestaurantNext