I have wanted to try Edmonton’s Pampa Brazilian Steakhouse for a very long time but Mike was always against going because he didn’t think $50 a person would be worth it. For the most part, I agreed, but deep down I still wanted to try it. While we were in Las Vegas I saw a ‘Brazilian Steakhouse’ listed in one of the Vegas dining booklets and my desire was re-ignited! I figured, as with our Top of the World experience, if people can spend that much money on a normal night in Edmonton, why couldn’t we spend that much on a special night on vacation in Las Vegas?!

I did some Google research and Fogo de Chao came out as the top Brazilian Steakhouse choice. It had fantastic reviews on both Urbanspoon and Yelp, and a higher percentage than any of the other Brazilian steakhouses in the Vegas area. 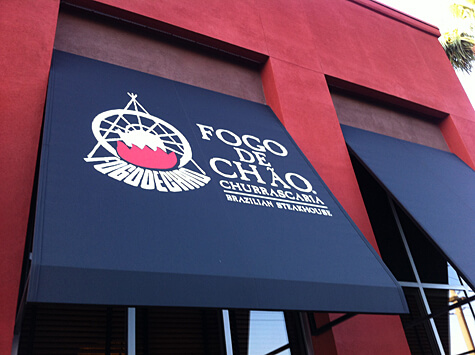 Fogo had probably the best service Mike and I have ever experienced at a restaurant. From the moment you step in to the moment you leave, there’s server after server answering your questions, making conversation, bringing out endless amounts of meat, re-filling drinks and side dishes, and just making us feel like we were royalty. 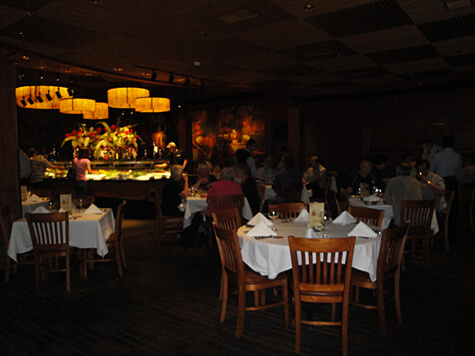 For $48.50 a person, you get unlimited access to their salad bar, side dishes and MEAT! Fogo offers 15 delicious cuts of meat that are cooked ala “churrasco” – they call it the ‘Gaucho’ way of roasting meats over pits of open fire. The “Gaucho way of preparing meat” really is the way to go because their meats literally had us salivating, it was so good!! 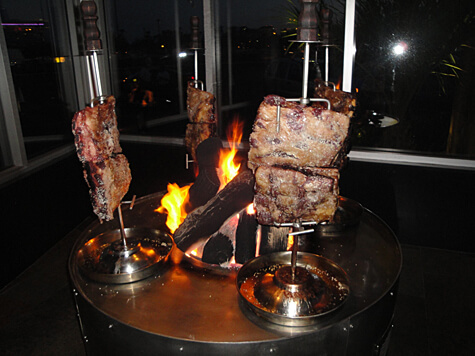 You’re given round cards at your table that are green on one side and red on the other. If red is facing up it means chefs will leave your table alone. If it’s green – be prepared to get bombarded by chefs and food! 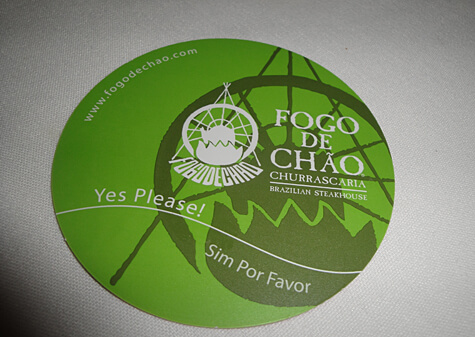 Yes please! Green means come to our table and give us more meat.

Chef after chef lined up at our table holding sword skewers of meat to cut for us. It was honestly overwhelming at times. At one point I accidentally flipped my card over to green to take a photo and then forgot to flip it back and in seconds a chef was at our table offering up more meat. 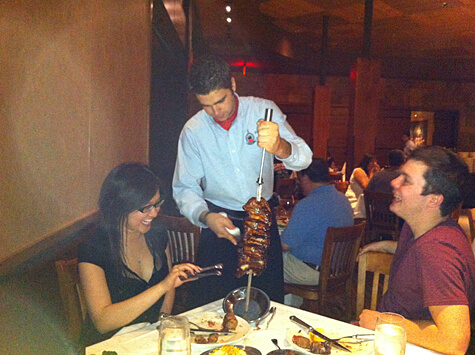 Gaucho chef cutting me some meat at Fogo de Chao.

We tried their “piacnha” (top sirloin), “alcatra” (top sirloin), “beef ancho” (rib eye), “fraldinha” (bottom sirloin), “costela” (beef ribs), “frango” (chicken, wrapped in bacon!!!), and “costela de porco” (pork ribs). I had wanted to try all 15 cuts but honestly you get stuffed – fast. The meat was juicy, tender, and so, so flavourful – all of the different cuts too, not just some of them! They also ask you how you like your meat done and then they cut a different part out for you based on that preference – and it’s a perfect cut every time! 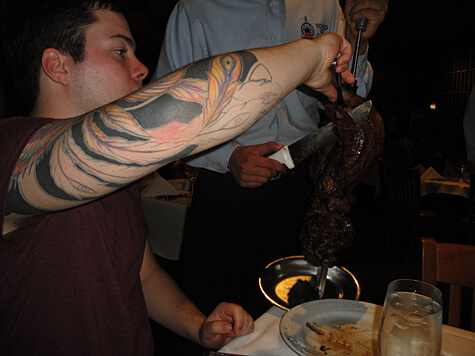 They bring out “pao de queijo” which is a warm cheesy bread that caused Mike’s face to light up because it tasted so good. You also get caramelized bananas, “polentas” (kind of like cornmeal) and mashed potatoes as your unlimited sides. (Apparently you can also ask for rice and beans and other side dishes but those are only brought out upon request!) 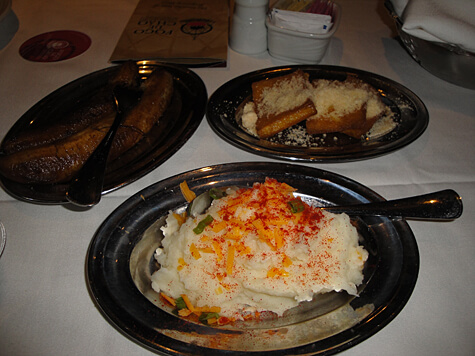 As soon as it looks like your mashed potatoes plate is nearing empty – bam, there’s a new, hot plate of it on your table. I cannot stress how excellent the service is. I wanted to take some photos of the food and our chefs and the servers were completely happy to take part. There were some chefs that had meats that we had already tried and when we declined, they asked us which ones we wanted to try and then that particular meat was immediately brought to our table. The cornmeal side dish was honestly the only thing we didn’t really enjoy at Fogo, it just felt kind of flavourless to me, though we were told by servers that it’s a favourite for a lot of people. 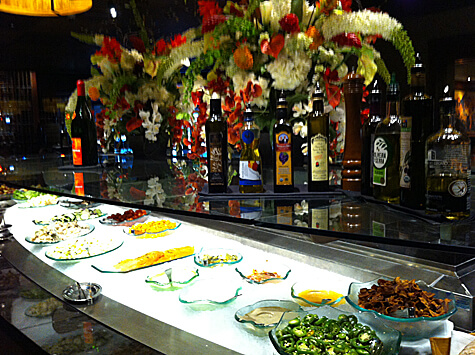 You can go crazy on the salad bar alone but DON’T! because you definitely need to save your appetite for the meat. :) 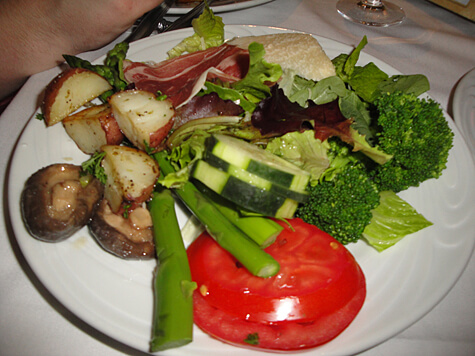 You get your money’s worth at Fogo from the service to the selection to the taste of the food. The meal even includes dessert too but we were too full to try any! Although Mike and I don’t like paying that much money for our meals, we both agreed Fogo was worth every penny. The food tasted amazing and there was a ton of variety. The service was impeccable. The experience was unforgettable. 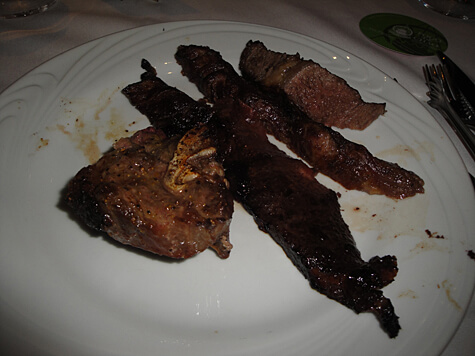 We left Fogo de Chao completely satisfied. Mike even wanted us to go back the next day! I can’t think back to the night without having a huge grin on my face it was definitely well worth the money and a Las Vegas memory that I’m happy to have. Fogo de Chao is off the strip – so getting to it was a bit of a struggle (a very, very long walk! We realized after that we could have just taken one of the side road buses) but again, worth it!! Now we need to go to Pampa in Edmonton to see how it stacks up!! I’m just hungry thinking about it. 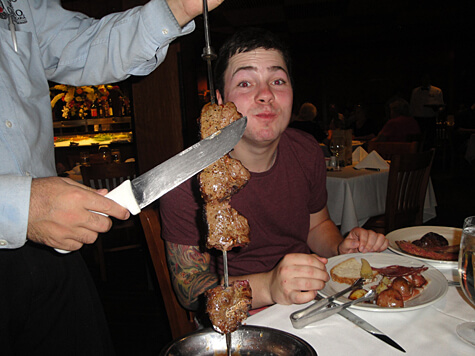 So have you been to Fogo de Chao?! (Or any Brazilian Steakhouse?) What did you think?? If you’ve been to Edmonton’s Pampa, would you say your experience was the same as mine at Fogo’s?

Linda Hoang is a Canadian blogger based in Edmonton, Alberta, who writes about travel, food, lifestyle and pet topics. She's also a seasoned social media/digital strategist with a journalism background, the founder of the Edmonton International Cat Festival and co-founder of Stop Race Based Hate, an online anti-racism education tool. Linda loves exploring the world with her partner Mike, eating their way through cities, supporting local businesses, and photographing Instagrammable Walls. Linda is a fur-mom to two cats and two dogs.
PrevPreviousClicks of the Day: Wednesday, May 2, 2012 Edition!
NextPhoto of the Day: Thursday, May 3, 2012Next