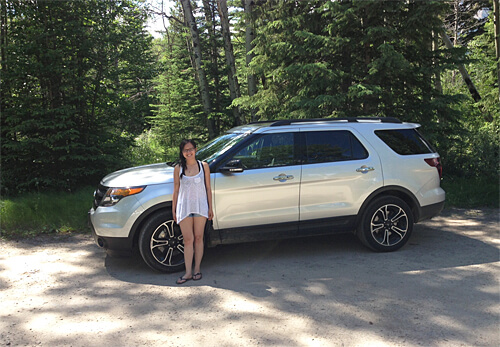 Exploring Alberta with the Ford Explorer.

Over the weekend, we got the chance to explore Alberta with a Ford Explorer! The lovely Nisa from Focus Communications got in touch with me last month about the opportunity after seeing my Alberta Railway Museum blog post/tweets and my desire to do daytrips and staycations this summer. Part of Nisa’s job is working with Ford Canada to get social people testing out vehicles and reviewing them either via blog post, tweet or through photos. I had actually been noticing some car reviews from not-your-typical-car-reviewing type people in recent months and liked where they were going with this.

Technical specs not so much my forte, but how does a Ford Explorer fit into my lifestyle? That’s something I could definitely write about! Mike and I had the 2013 Ford Explorer Sport from Wednesday June 26 to Tuesday July 2. The big ‘Explore Alberta’ trip we took Emma the Explorer (what I named the vehicle because that’s adorable) on was a daytrip to Jasper, Alberta. We took off down the Yellowhead to Jasper with Mike’s sister Amanda and boyfriend George on Sunday, stopping for a picnic at Pyramid Lake and trying out white water rafting down the Athabasca River for the very first time. So much fun!

Here’s what we liked about the 2013 Ford Explorer Sport:

You can set the driver’s seat and wheel to your preference, and then when you start the car it will automatically move the seat/wheel to that set preference! In fact there are 3 save settings for preferences so if there are multiple drivers you can make it remember each drivers’ preferences, very handy!

You just need to hit a button to start the engine. I realize this is a common function in many vehicles now but Mike and I both have been driving old, used vehicles, ever since we started driving, so this function has never been an option for us which makes it amazing. 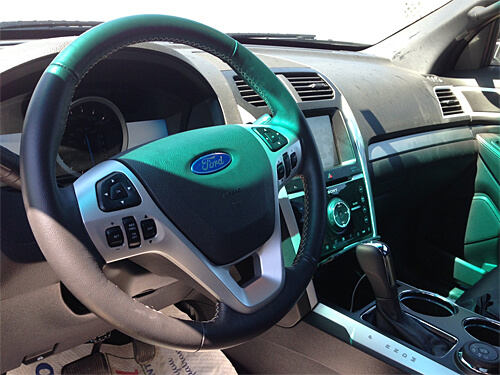 The automatic adjusting cruise control – which slowed down and even braked the vehicle if approaching a slower vehicle, as well as the cool blindspot detector in the side view mirrors – which lit up to let us know when a vehicle was in the blindspot.

It’s huge! There’s a ton of room that we don’t necessarily need but it seats seven plus a bit of storage space or it seats five with a lot more storage space, which is great. 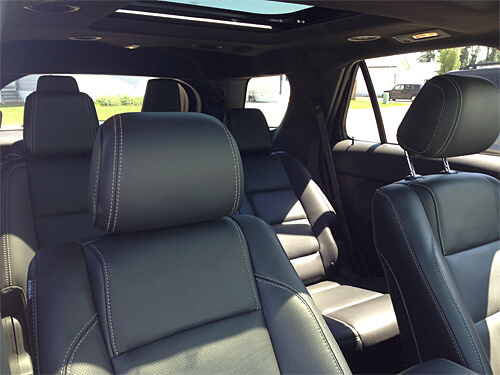 The rearview reverse assisting camera – again this is probably a common function in many vehicles nowadays but it’s brand new for us!

The option for air-conditioned seats! Very strange feeling at first but once you get used to it, this option makes for a heavenly ride… especially on a hot day. It’s nice that there’s also rear climate control functions as well (our guests definitely appreciated that!) 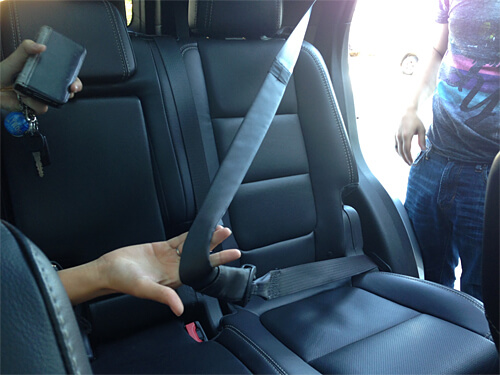 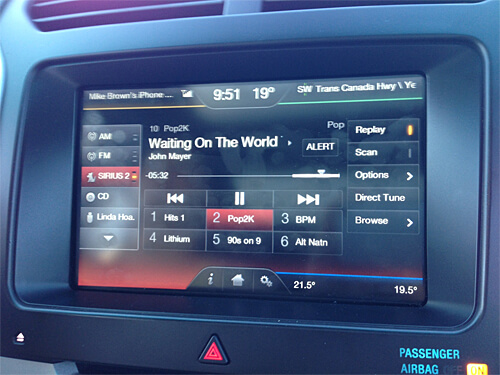 Entertainment options for the Ford Explorer are great.

The entertainment/music options were great (but this was likely because there was Sirius XM Satellite Radio pre-installed). But we loved that we could pause or replay favourite songs, and also switch between radio, our phones, and Sirius XM music as well as the comedy channels. Good sound all around as well. 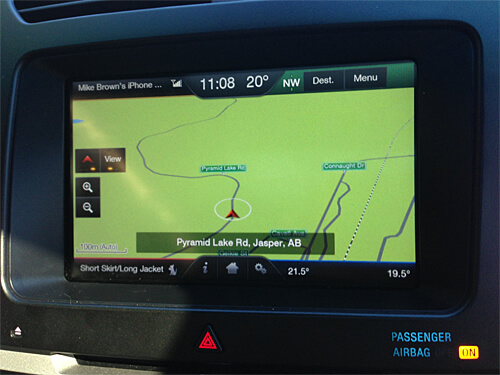 The navigation/GPS was awesome. Normally we are on our phones using up Google Maps in order to get to unknown places and that usually drained our phone batteries fast, but the navigation system on the Ford Explorer meant our phones could stay charged to capture photos of the trip. ;) Loved it.

There are fun colour personalization options – a few different trim and areas inside the vehicle can light up a certain colour at night and it’s up to you what colour you want. I originally had it on purple. Mike changed it to red. Lol. 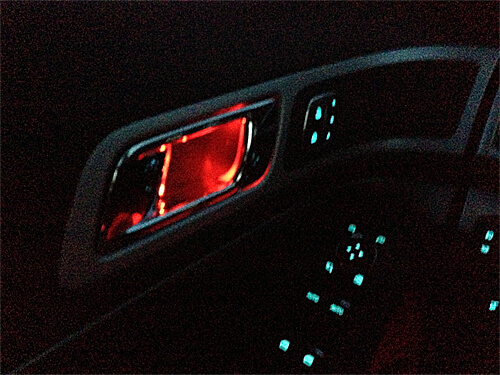 What we didn’t like about the 2013 Ford Explorer Sport:

It’s not the best on gas. Filling up with a quarter tank of gas left cost about $50. We had to fill up quite a bit on our day trip. Also the seats weren’t all that comfortable for a long ride. 4 hours to Jasper and 4 hours back plus a bit of driving in between town? I had a hard time sleeping (which is rare) and I think it was because the seats just felt too stiff. Perhaps they just needed to be broken in a bit more.

And also what we didn’t like is that we didn’t get to keep it forever. LOL! But seriously, Mike has been wanting a new vehicle for awhile now and I’ve said that just can’t happen until after our wedding and even then I felt like other big purchases were more important. Now after getting a taste of the Explorer/a new vehicle in general, I am itching for something brand new too. We don’t know if we’d get the Ford Explorer Sport necessarily, again it’s probably too big for our purposes, but we definitely want some kind of SUV and we’re so thrilled we got the chance to try this one out.

Thanks so much to Nisa/Ray/Dean at Focus Communications + Ford Canada. What a great experience. 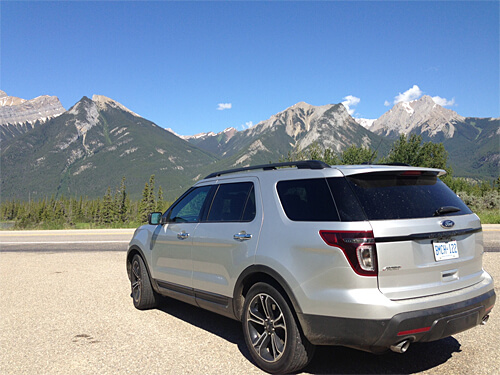 And here’s a quick summary of our day trip to Jasper: Pyramid Lake is gorgeous! We found out that the lake is the most popular spot in Jasper for wedding photos. I totally understand that. So peaceful and nice. And I love that there were picnic tables pretty much steps away from the water. It made for a great picnic spot. 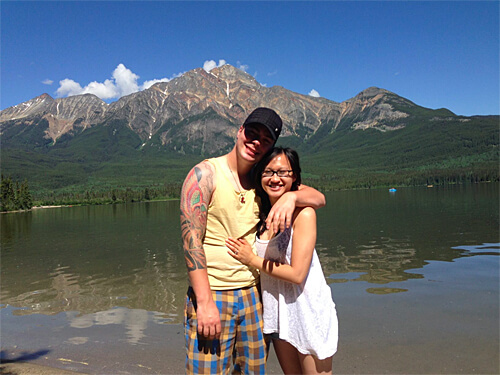 At Pyramid Lake in Jasper!

We went white water rafting with Jasper Rafting Adventures. Our guides were great – and all had awesome accents (I think they were all from Australia). We went into a raft with a family from Calgary. George made an inappropriate joke about the Calgary floods. It got awkward. lol. We signed up for the Class 2 rafting experience, and Mike and George were actually quite nervous initially about going on the rafting adventure but after the fact – we are all eager to try the next level up. The experience was great and the scenery was breathtaking, but the actual rapid, water splashing against your face, only occurred a few times during the trip. I think we were all craving for a bit more action but it was a great first experience that I would recommend to EVERYONE! (Seriously, from children to seniors. The website advertises kids as young as six and seniors as old as 90 can enjoy the Class 2 rafting experience. In fact there were 3 kids under 10 on the bus with us!) 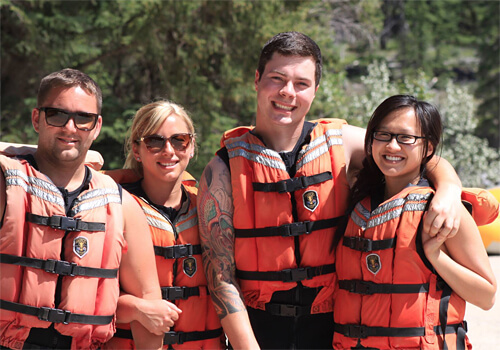 Our specific tour guide Steph was also great. She pointed out the names to the famous mountains and some history behind the names. We also learned that the water we rafted on in the Athabasca River was just 22 hours old. It takes it that long to come down after melting off the Athabasca Glacier. We also got a chance to jump into the calmer waters near the area where the two rivers meet, which was so much fun (and very cold! But refreshing on a hot day). A pretty awesome summer day spent in Jasper! 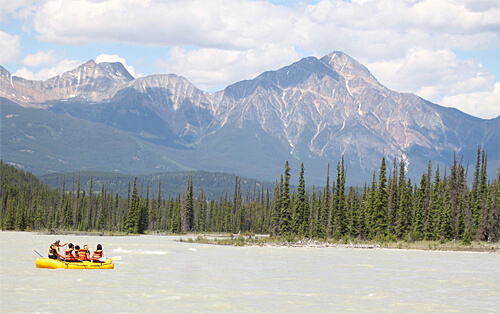 White water rafting down the Athabasca River in Jasper!

We also took the Explorer to Fort Saskatchewan for the Canada Day parade on Monday morning: 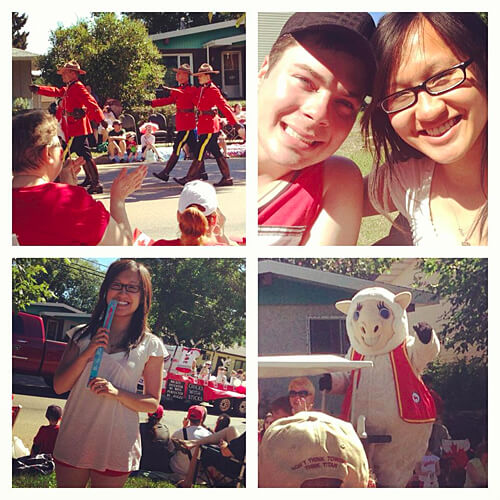 It was a lot of fun and I urge everyone to check out the wonderful communities surrounding Edmonton! We plan on returning to Fort Saskatchewan at some point this summer to check out their grazing sheep. I was hoping to see them on Monday but apparently they only graze Thursdays to Sundays!

So what do you think of the Ford Explorer? And/or have you ever been white water rafting?

Linda Hoang is a Canadian blogger based in Edmonton, Alberta, who writes about travel, food lifestyle and pet topics. She's also a seasoned social media/digital strategist with a journalism background. Linda loves exploring the world with her husband Mike, eating their way through cities, supporting local businesses, and photographing Instagrammable Walls. She is the founder of the Edmonton International Cat Festival and a fur-mom to two cats and two dogs.
PrevPreviousReview: Sakai Sushi Bar (Spruce Grove)
NextSocial Media Column: Projects take off with crowdsourcing, crowdfundingNext