On Friday Mike & I went to the Edmonton Rocky Mountain Wine & Food Festival at the Shaw Conference Centre! While I love food, eating out and going to festivals, this one would probably not have been on my to-go-to list had it not been for the fact that I won two admission tickets via @shorelinegold‘s Ticket Giveaway Contest! (Thanks Chris!) 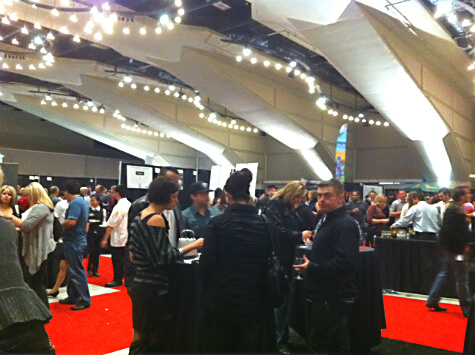 Since we’ve never been, we didn’t really know what to expect but one thing’s for sure – it was packed! We bought 80 sampling coupons for $40. I was worried that that wouldn’t have been enough because I wasn’t sure how many coupons each dish would cost. On the website it said “samples range from 1 to 20 or more coupons, depending on the item” so I was expecting the worst – that many samples would be in the 20 or more coupons-end. But thankfully my expectations were wrong!

I should say that Mike & I don’t care for wine – at all. I suppose he could have tried some of the beer at the festival, but he didn’t – our main goal was to eat. We’re piggies like that. :) But I think it’s because we weren’t trying any of the drinks that we were able to get soo much food out of our coupons! Also – we looked at every single food both and didn’t see any where they were asking for 20 or more coupons for a sample! So I think maybe it was on the liquor end where that 20 or more figure comes in.

Below are just some of the dishes we sampled at the Edmonton Rocky Mountain Wine & Food Festival – and some commentary to go along with it! ;) Scroll down for the overall sum-up. lol 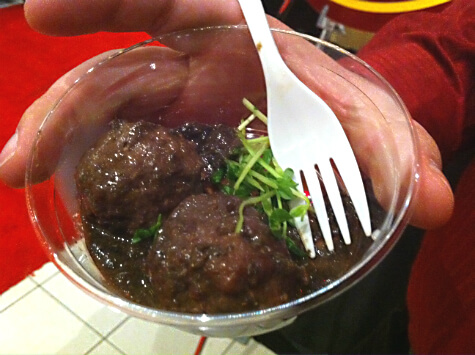 The first thing we tried was the Venison Meatballs from Niche. We didn’t really want to – I think it was 4 coupons for 1 meatball and I didn’t think that was really a great deal but we ended up seeing an old classmate at the same booth who was promoting the dish so we got one for the hell of it, lol. She actually got us two meatballs in our one sample so that we could both have one which was really nice of her (but otherwise it’s 4 coupons for just 1 meatball lol). Wouldn’t really recommend sparing your coupons for it. 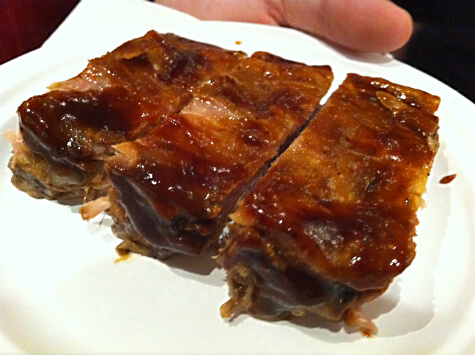 We tried the BBQ St. Louis Ribs from the Great North American Grill and they were delectable! I believe one plate was also 4 coupons. I’d say worth it in this case. 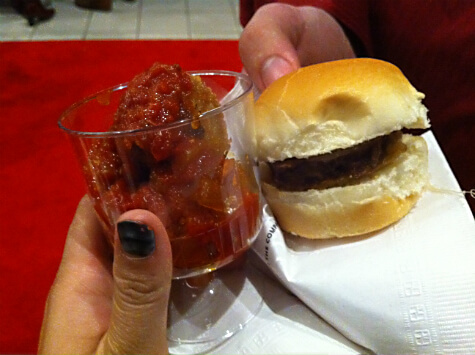 Next up were the Mini Roasted Mushroom and Goat Cheese Risotto Balls & Kobe Style Classic Beef Sliders from Milestones. I forget how many coupons each were (4 or 5 each) – but I’d say not really worth it either. Sometimes it’s about quality AS WELL as quantity and in this case the quality was not superb enough to offset the tiny portions (though to be fair, sliders are generally tiny in the first place, lol). 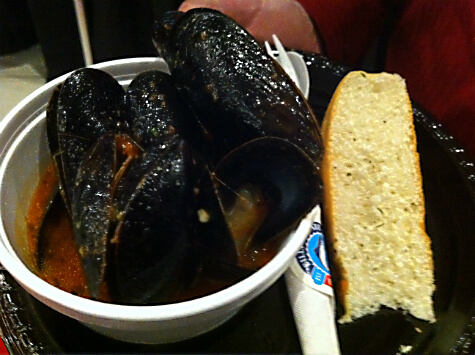 I was tempted to try the Mussels from Billingsgate Lighthouse Cafe but wasn’t 100% sure if I would spare the coupons until I saw how many mussels they actually give you! Holy cow! This dish is easily one of the best bang for your sample coupon bucks that you could get at the Festival. 10+ mussels (though they were on the smallish side) – plus bread – plus the yummy sauce they came in that goes excellent dipped with bread or just sipping on its own! Yum! 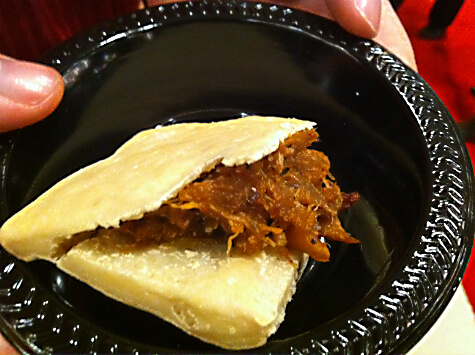 Mike had the Pulled BBQ Pork Bannock Tacos from Creations. He enjoyed it! I only had a small bite so I can’t say much to it but it was good! 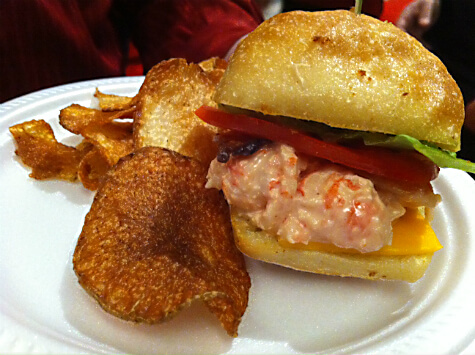 I was very excited to try the Lobster Prawn Clubhouse from The Cheesecake Cafe! I saw a girl walk by earlier in the evening with a plate of the clubhouse PLUS kettle chips! My favourite! I knew I had to grab a plate for myself. :) It was pretty good! Definitely not your typical clubhouse (I’ve never been to The Cheesecake Cafe before so the entire Lobster Prawn Clubhouse was new to me, haha). But let’s face it, as a chip lover, I was mostly just after the delicious chips and boy were they! ;) 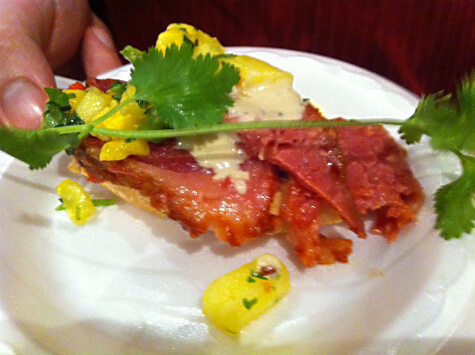 Apologies for the above blurry photo – hard to focus with your phone when you’re also juggling multiple food plates, lol. Anyway this Chipotle Beef Brisket was okay – the beef was delicious actually but I wasn’t a fan of the sauce and I never really like it when pineapples mix with anything other than other fruit, lol. So I mostly just ate the beef and bread it was on and pushed aside everything else, haha. 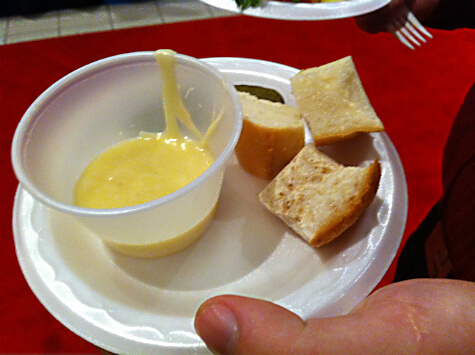 While I was getting the brisket, Mike was on the other side of the Sunterra booth for their Classic Cheese Fondue. Not something I’d spend money on normally but good. 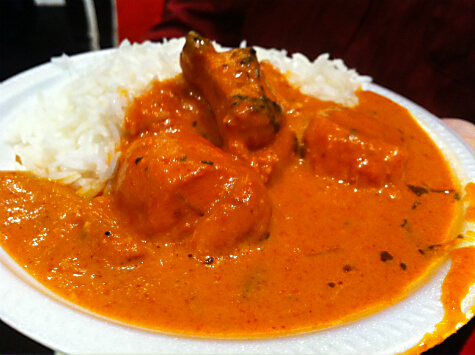 Butter Chicken and Rice from Khazana

We were going to avoid the Butter Chicken at Khazana because it was 10 coupons per plate!! Wowsa! To be fair you get a few chicken chunks, it’s soaked in yummy sauce and rice is always a stomach filler. So – I’d say worth it. Plus we had 80 coupons, by the end we were running out of booths to use them at, lol. But it was definitely one of the highest coupon numbers per plate at the Festival. I didn’t see anything higher than 10! 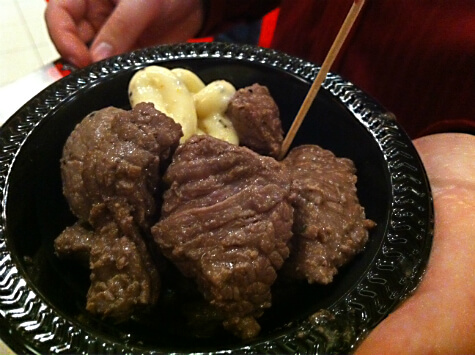 Steak Bites from On The Rocks

There were a few different booths selling steak bites but we decided on the ones at On The Rocks – which turned out great because they gave us a $10 gift certificate to either On the Rocks or The Druid! And we love The Druid!! So even though we spent $40 on tickets, it really feels like we only spent $30 because we got $10 back on a restaurant we’ll definitely be going to! Woot. 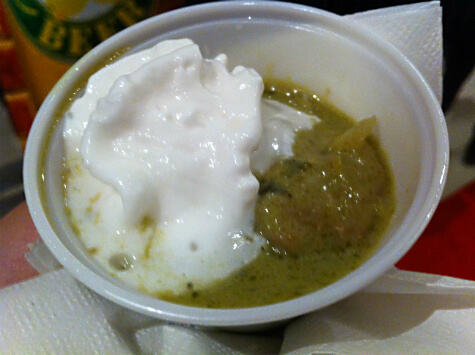 The Thai Green Curry Chicken with Coconut Foam from Botanica was a little strange! The chicken and green curry was delicious but I didn’t think the coconut foam really worked with it at all, lol. Definitely could have done without. 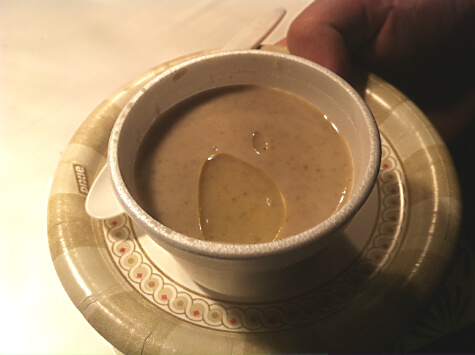 Also something passable was the Wild Mushroom and Alberta Wild Rice Soup with Truffle Essence from The Westin. I spent my last 4 coupons on it and I think we were just kind of in a rush to get a final plate and head on home, which is why I made the poor decision to get this meh soup, lol. Bad presentation (the one on display looked better) – and there wasn’t anything special about it. I wish I had had an extra coupon to get another plate of the mussels! lol. 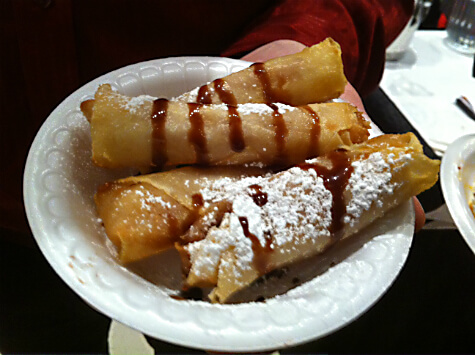 And the only dessert we had was the Chocolate Apple Rolls from Blue Willow! I’m not really a dessert person. I like to spend my food coupons on entree/appetizer stuff, lol. But the chocolate apple rolls did look intriguing and it did come with quite a few rolls (it was 7 coupons so I hoped that the quantity was high!)

We tried a few other dishes that I didn’t put up photos for, and we entered the door prize draw which it would be amazing if we won! Hehe. Overall it was a great night! How could it go wrong really? Free admission tickets, surrounded by food booths, sampling various dishes!

Because of my frugality – I will repeat that I would not have gone to this had I not won free admission tickets. Although I would be more inclined to do so next year now that I’ve experienced it! I think if you get admission tickets early it’s not too bad but I know on the night of they were $28 each which – plus having to buy sample coupons – is too rich for my blood.

But I had a lot of fun at the Rocky Mountain Wine & Food Festival! (Minus the Wine ;)) It was like a very, very classy Taste of Edmonton, haha. I got to try a lot of dishes from restaurants I’ve yet to visit here in Edmonton and it definitely makes me want to head to those restos in the near future! :) (Which I suppose is part of the reason the restaurants partake in the festival :)). Plus it was a nice excuse to dress up!! :)

So have you been to the Rocky Mountain Wine & Food Festival?

What did you think!? What dishes would you recommend?!

Linda Hoang is a Canadian blogger based in Edmonton, Alberta, who writes about travel, food lifestyle and pet topics. She's also a seasoned social media/digital strategist with a journalism background. Linda loves exploring the world with her husband Mike, eating their way through cities, supporting local businesses, and photographing Instagrammable Walls. She is the founder of the Edmonton International Cat Festival and a fur-mom to two cats and two dogs.
PrevPreviousClicks of the Day: Thursday, October 20, 2011 Edition!
NextClicks of the Day: Oct 21, 22, 23 2011 Weekend Edition!Next