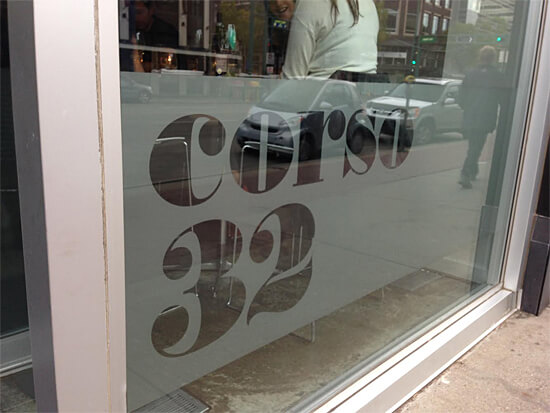 As an Edmonton food blogger and food lover, it shocks many to hear that I’ve never been to famed Italian eatery Corso 32.

The restaurant is award-winning – best Italian restaurant, one of Canada’s best restaurants – and I always felt like a food fraud when I admitted I’d never been.

That all changed on Sunday! For our one-year wedding anniversary, Mike and I finally went to Corso 32.

A summary of my thoughts would be: Excellent food, fair prices, but not the best service or atmosphere. Read on for the nitty gritty details. :) 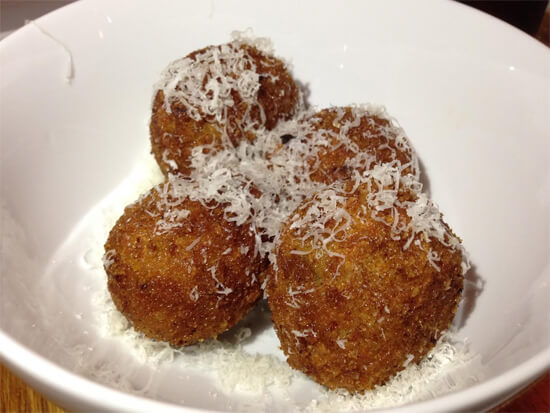 The space (at 10345 Jasper Avenue) is small. We knew that going in though – it says it in the name “32” – 32-seat restaurant. It’s a small, narrow restaurant, with very few group tables and a lot more smaller two-seat tables. We were seated at a two-seat table right next to another two-seat table. The gap between both tables was tiny. We could have been seated with the couple next to us at the same table really, that’s how close we were.

So that made for sort of an awkward feeling throughout the night, because we could very clearly hear their conversation and I’m sure they could very clearly hear ours. We felt more compelled to talk in a quieter tone so that we didn’t interrupt the couple’s conversation. The waiter also had to awkwardly stand at an angle to talk to us, take our order, or give us our food, because he couldn’t actually fit himself into the space right beside our table.

But moving away from that for a moment, let’s talk food.

Corso 32’s food was amazing. Since this was our first time – and it was a special occasion – I was excited to try many items. 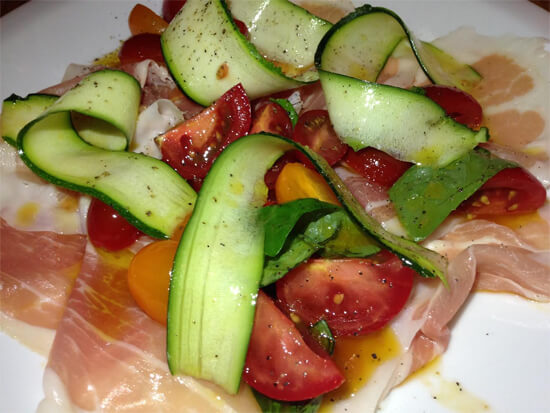 We shared the arancini (speck, cabbage, fontina – $8), prosciutto Di Parma (mozzarella di Bufala Crema, Gull Valley Tomatoes, Zucchini & Capezzana Olive Oil – $17), and fried short ribs (with shaved pear and arugula salad with crostini – $16) to start. The arancini was perfectly seasoned, rice cooked to the perfect texture. The prosciutto Di Parma was so light and refreshing. Mike thought it had a bit of a slimey texture but I thought it was perfect. The fried short ribs were my least favourite of the three appetizers, it was really charred on the outside, which I think that’s what they were going for, but felt too charred (so burnt) for my liking. 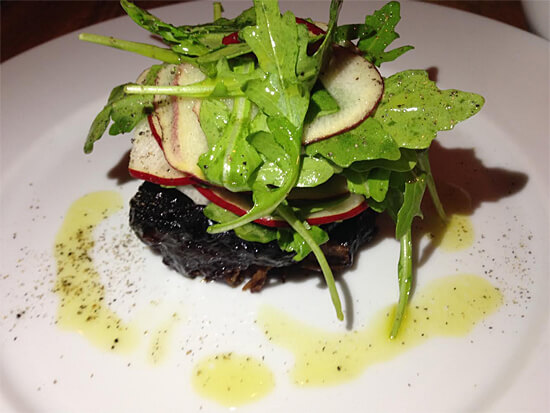 Next up we each tried a pasta dish. Mike tried the Garganelli – braised tuscan pork and porcini ragu, parmigiano ($25) and I tried the Cavatelli – spicy pork and fennel sausage sugo, broccoli rabe and pecoroni ($23). There is just a taste to handmade pasta that is addictive!!! I could eat it every day, forever. The pasta plates were also quite hearty. The portions were great – for the price. To compare prices, you could look at the complete opposite side of Corso, Olive Garden, where they have a bunch of pasta dishes well into the $25 range. So really, getting a hearty helping of handmade pasta for the same price point at Corso is fantastic. 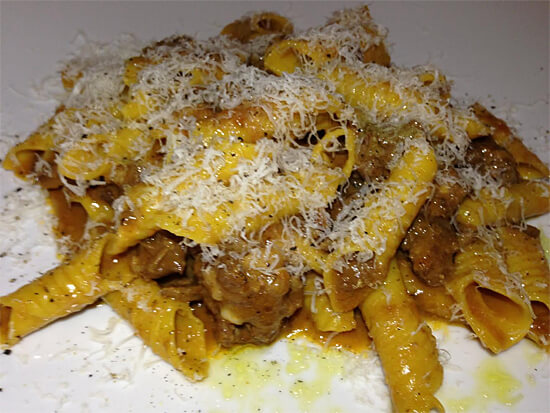 The last dish we tried at Corso was the 35 day aged 10 oz. Ribeye with charred radishes, spring onions and salsa verde at Corso 32 ($35). They were nice enough to split this onto two plates for us – and I felt both portions split were quite a bit too! The salsa verde was an excellent pairing with the tender beef and the radishes and onion were in nice chunks that made for a nice potato alternative. 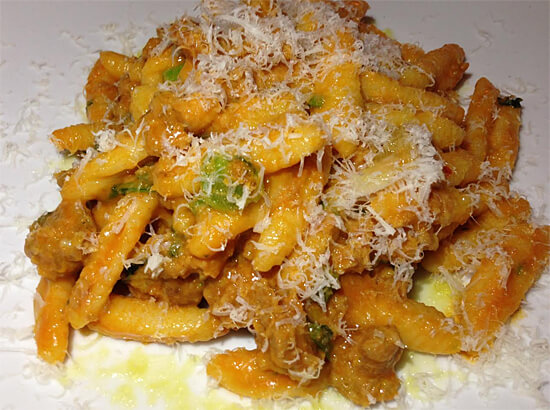 I had wanted to try Corso’s vanilla panna cotta too because panna cotta is one of my favourite desserts (which is saying something because I don’t actually like most desserts), but they were out! What. It was about 7:30 and their dinner service started at 5 so I just don’t know how thy could’ve been out of the panna cotta :(

Overall, I was really expecting portions to be smaller and prices to be higher at Corso because of its finer dining reputation, but I was really pleasantly surprised on both fronts!! The portions were fine, the prices were on par with a lot of other fine dining and typical restaurants, and the food tasted incredible and was plated very nicely.

Where my disappointment came was in the atmosphere – too dimly light (I used flash from my second phone to give lighting for the photos lol, also more and more restaurants are going dimmer these days, which is unfortunate), and too close proximity to other tables – as well as the not-so-welcoming service.

I think it’s fair to assume if I am waiting a month for a reservation to a restaurant, I want not only the food, but the service, to knock it out of the ballpark and I really thought our waiter was no good. It took awhile for him to make that initial greeting to us, and even that wasn’t really overly welcoming an intro. He didn’t really make any suggestions on the menu, or try to explain anything. He also tried to take away the menu after I finished ordering the pasta, so I had to awkwardly be like, oh actually we also wanted to share the rib eye.. 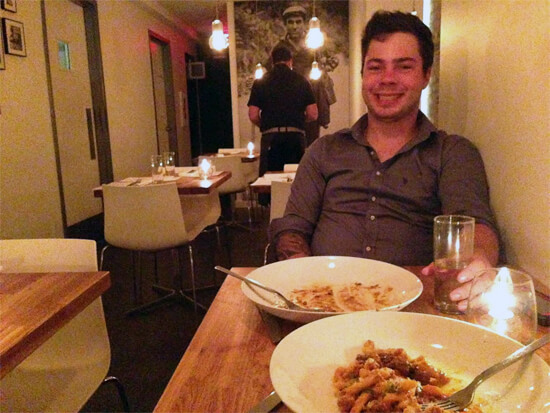 The food came out at a good pace, so that was fine. But I think timeliness of that initial greeting is so important and he just took too long to get to us (and then when he did, it wasn’t really friendly).

Service is such a huge part of any dining experience, let alone a fine dining one where you need to make reservations well in advance. So that our service at Corso was pretty lackluster, was a big disappointment.

Go for the food – it’s amazing. But don’t expect to feel all that special. It could also be that because it had taken so long for me to try it, that it had been so overly hyped up there was no way it could’ve lived up to expectations, but that’s more me trying to find excuses for it. 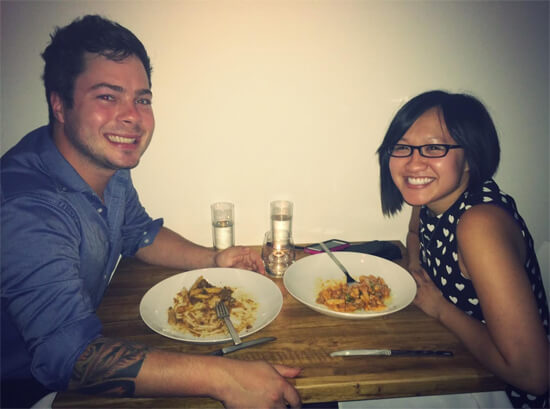 Happy one-year wedding anniversary to us!

I am still so glad we finally tried it. A food fraud I am no longer, lol! Again, I thought the food was excellent. But my opinion of Corso will always have a caveat. “The food was amazing !!!! But…. The service wasn’t great (at least when I went).”

So have you been to Corso? What did you think?

Linda Hoang is a Canadian blogger based in Edmonton, Alberta, who writes about travel, food lifestyle and pet topics. She's also a seasoned social media/digital strategist with a journalism background. Linda loves exploring the world with her husband Mike, eating their way through cities, supporting local businesses, and photographing Instagrammable Walls. She is the founder of the Edmonton International Cat Festival and a fur-mom to two cats and two dogs.
PrevPreviousSocial Media Notes (#44) – Links for the Week of September 29 – October 5
NextMy Simply Better Moment by Edo Japan!Next