We finally tried Brits Fish and Chips this week! We’ve been driving by this restaurant (their central location in Oliver, at 11603 104 Avenue) every week for years and have always wanted to try it but would always default to old favourites or try new spots, so I’m very happy this Edmonton A to Z Restaurant Series is really pushing me to go to places that have been on my list for awhile. 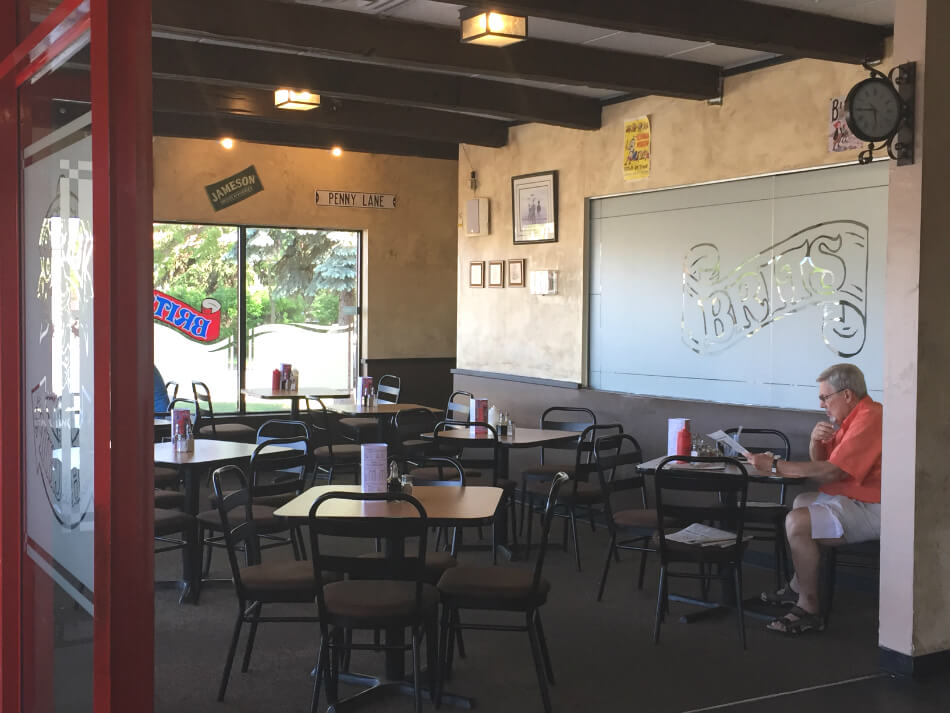 We went to Brits with our friends Fred and Catherine (who also joined us for the other “B” spot I reviewed: Brewsters). Walking into the place, I wasn’t expecting it to be kind of cafe-like. Not like a trendy cafe, but sort of like those older, classic random neighbourhood or small town ones. It’s split into two clear sides – one for seating and one for ordering / waiting for take out. 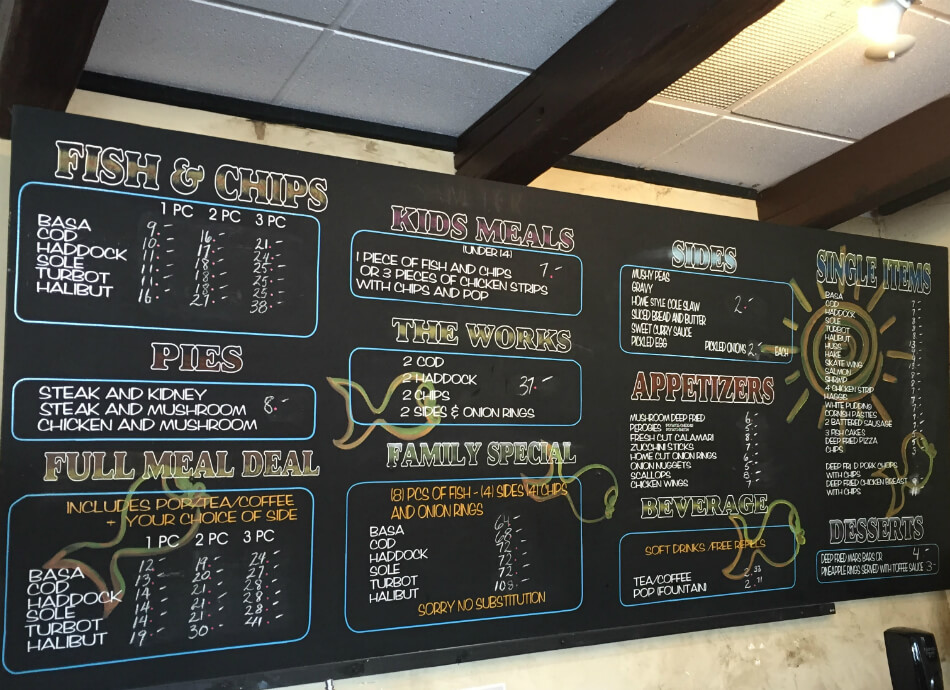 We didn’t realize when we walked in that you have to order at the front. A couple of people who came in after us also weren’t sure, so it was a bit awkward after they were seated and then realized no one was coming to get their order. (Though we did notice a lot of people just came in to get take-out orders).

Brits menu offering is primarily what the restaurant is named for: Fish & Chips! Very simply, you can order one to many pieces of deep fried basa, cod, sole, haddock, turbot and halibut. You could make it single fish & chip orders or have them with a side and a drink (standard combo). The sides are just as simple: coleslaw, mushy peas, gravy, bread and butter, pickled egg or sweet curry sauce. You can also order separate appetizers, which include onion rings, nuggets, calamari, shrimp, scallops, perogies, wings, zucchini sticks, or mushrooms. They also have some savoury pies: steak and mushroom, chicken and mushroom, or steak and kidneys. (See their full menu + prices here!) 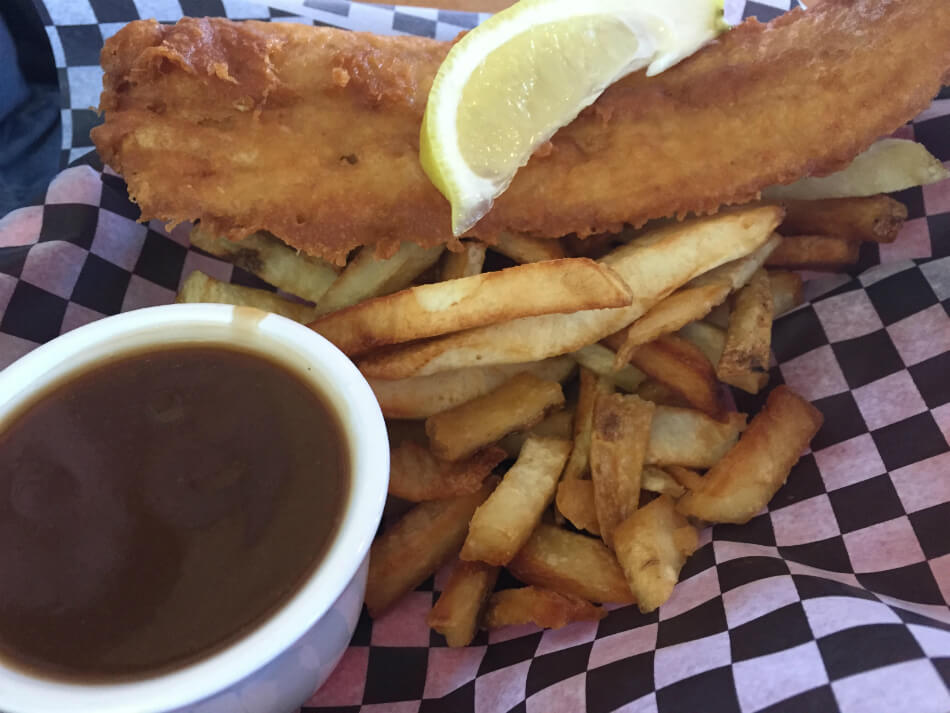 Our group ordered three fish and chip combos – one with one piece cod ($13) and two with haddock (one piece – $11, two pieces – $14). One was ordered with a side of gravy and the other two with coleslaws. I also ordered the steak and mushroom pie ($8) because I thought – savoury meat pies? That’s pretty British. We should try a variety of items and I think a British meat pie would be appropriate! Right? 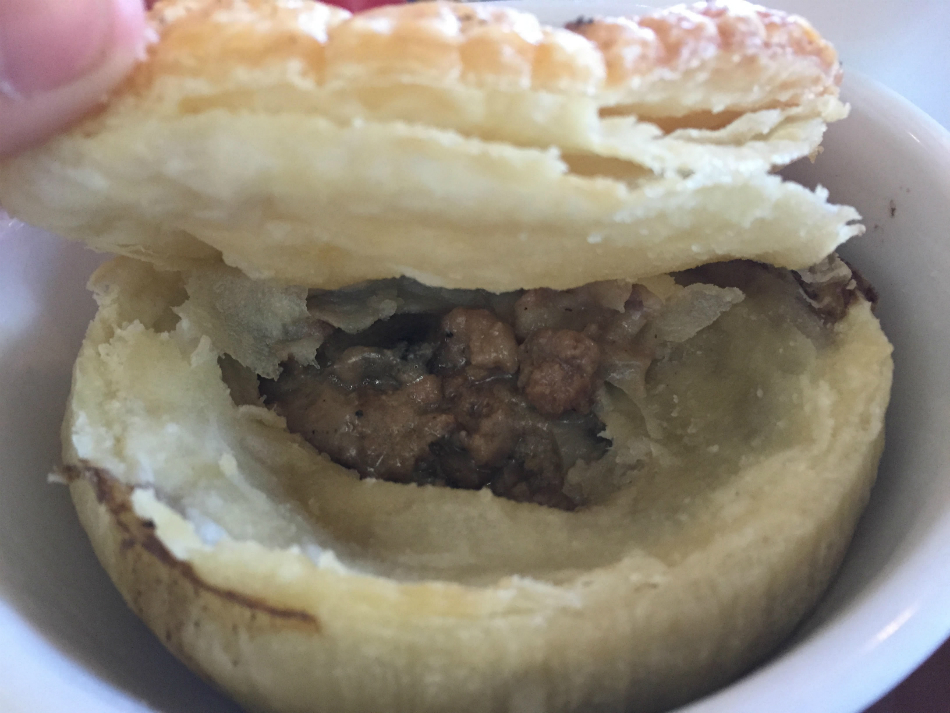 Mistake. The meat pie was not very good. It was pretty small, with not a whole lot of actual meat/mushroom filling, and the pastry was kind of hard to cut into. It just was very underwhelming. 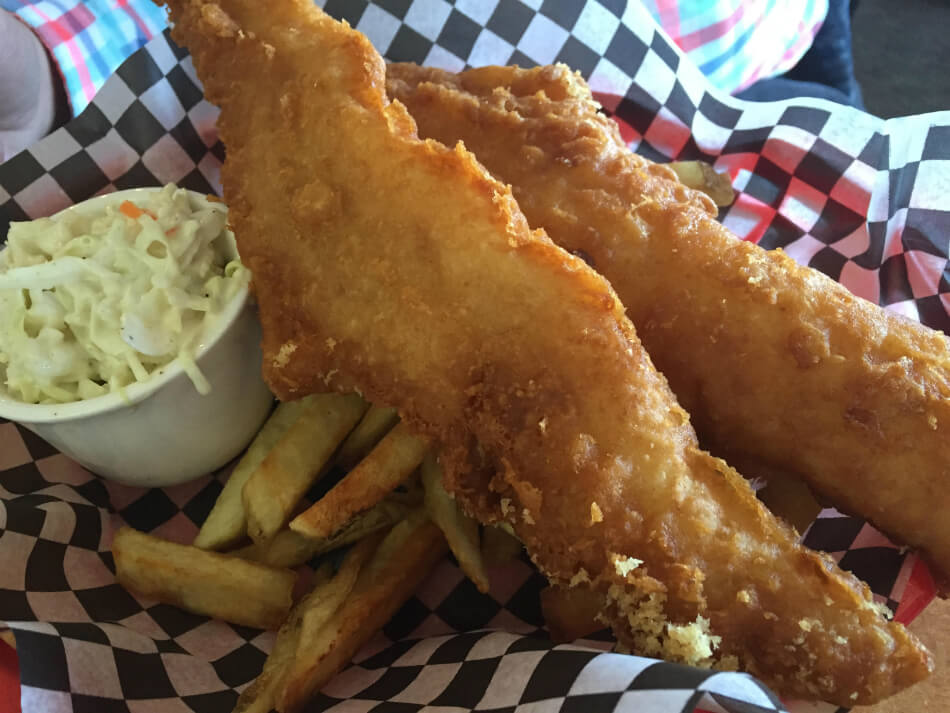 But!!! The fish was great. It was hot  – like the batter just came out of the oil and onto our table. Flakey. Moist. Seasoned well. I’m mad at myself that I didn’t take a photo of the cut-into fish to share with you (negative food blogger points on me, sorry). But what you’d want and expect in the “fish” part of a Fish & Chips order, this was. I didn’t find it overly greasy either, like I’ve found with other fish and chips I’ve had in the past. (The worst is having to dab it with a napkin/paper towel to try and soak up some extra grease. I didn’t have that issue at Brits!) I kept going back for more of Mike’s cod. I also quite enjoyed their tartar sauce. The chips (fries), however, were nothing really to rave about. The crispier pieces I dug (I generally prefer skinny, crispy fries) but there were more thick and soft which I think are the worst type of fries lol. So, slightly disappointing that if 50% of your biggest claim to fame (Fish and the Chips) is just okay. Though I am told that traditionally the chips in fish and chips should be a thicker cut. And I will also add that Catherine did really like her chips and thought maybe mind was impacted because I started on the meat pie first then moved to the fries so they were sitting for too long.

Price-wise, I thought Brits was pretty good! I mean $11 for the one piece cod + fries + a side and a drink combo? That is so reasonable. I have heard some people say Brits is too expensive. I could see it getting expensive as you add more fish pieces, for sure, but I mean, understandable. I think if you’re getting a single or double fish order (the combo), $11-$15 is a pretty decent price (it also gets more expensive as you climb up in fancier fishes). But I also think when you get fish and chips at other restaurants (in Edmonton) that don’t solely focus on fish and chips, it would cost even more!

There was a steady stream of customers throughout the night (people really love their fish and chips, I guess!) The atmosphere is pretty casual/quiet. The kitchen is run by some very friendly Asian people. I only note their race because I saw at least three of them (the kitchen is pretty visible from the one side of the restaurant) and I always think it’s interesting when ethnic/nationality-themed restaurants have chefs who aren’t that same ethnicity. It didn’t impact our meal though (overall) – they make some damn good fish (though I wouldn’t recommend the pies…) I’ll also note that some of the sides (the coleslaw, the gravy) came in little white tea cups you’d find at Asian restaurants, which I thought was kind of funny lol.

As a side note, you can also order beer at Brits! It would be surprising and not very British, I think – if you couldn’t have some beer with your fish and chips.

Overall, we would come back to Brits Fish & Chips! As they say on their website, “Brits truly is a great little catch!” (How cute is that?) They’ve been open since 2002 (the Oliver Square location is actually their second location because they saw such demand at their original south side spot). On my return trips I’d like to try the traditional mushy peas, and also maybe some of their appetizers (just to see! Maybe I’ll be disappointed as I was with the meat pie, but maybe I won’t). I am in no way a fish and chips aficionado but I do love fish and I did love Brits’ fish.

So, have you tried Brits?! What did you think?

Also, if you have suggestions on where I should go for the other letters of the alphabet in my A to Z series, please leave a comment below!

Linda Hoang is a Canadian blogger based in Edmonton, Alberta, who writes about travel, food lifestyle and pet topics. She's also a seasoned social media/digital strategist with a journalism background. Linda loves exploring the world with her husband Mike, eating their way through cities, supporting local businesses, and photographing Instagrammable Walls. She is the founder of the Edmonton International Cat Festival and a fur-mom to two cats and two dogs.
PrevPreviousReview: Brewsters (Edmonton A to Z Restaurant Series)
NextRecap: The 2015 Edmonton International Cat Festival!Next