This week Mike and I went to see the world’s #1 musical!!

The Lion King is in Edmonton July 14-August 9 at the Northern Alberta Jubilee Auditorium and if you don’t have tickets yet – please, go get some. No really. What an amazing show!!

I remember regularly crawling around our apartment on all fours, pretending I was a lion, roaring at nothing, reenacting the movie – including belting out all of the songs (I was a one-girl show) lol. I would proceed to do the same for subsequent movies in the Lion King series. It was one of the most memorable Disney movies I grew up with – same with Mike. He says he’s probably watched The Lion King “more than a million times” growing up, lol.

Needless to say, we were pretty pumped to go (and to make up for missing it when it was in Edmonton last – back in 2009). 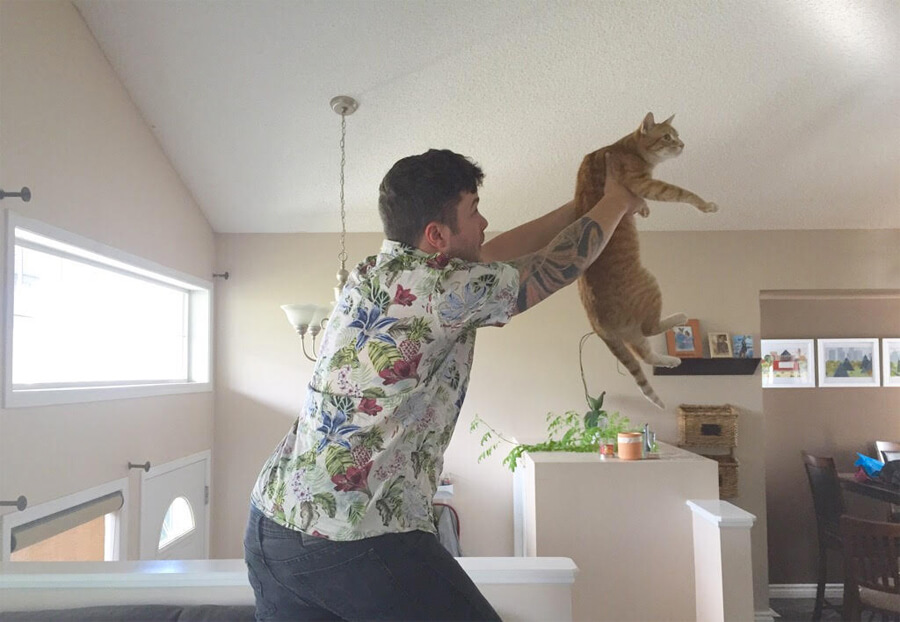 Re-enacting The Lion King with Loki before the show!

We hit up the “Grub Club” at the Jubilee Auditorium before the show – which was just a simple but clever and fun themed snack and slushie stand. 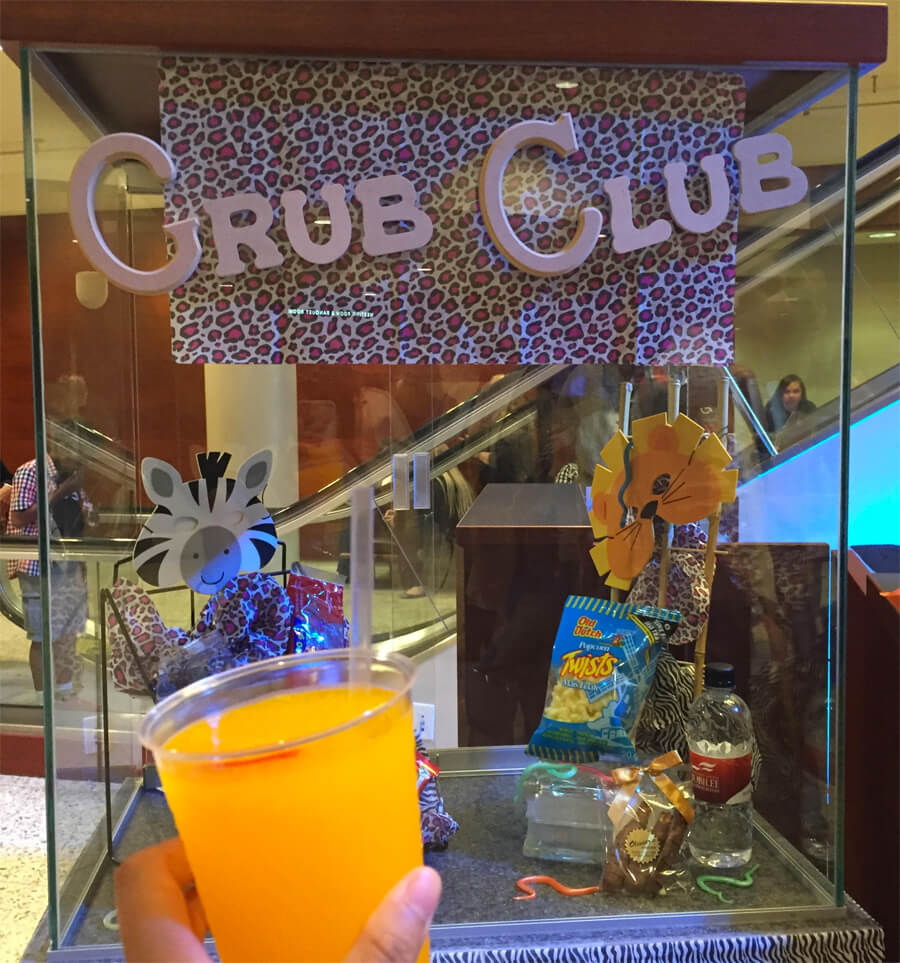 Got myself a Jungle Juice (with worm included) at the Grub Club before The Lion King!

I wasn’t sure how the animals were going to be presented on stage but had high expectations – which were completely met. Endless props (lol pun) to the costume designer (Julie Taymer), mask and puppet designer (Julie Taymer and Michael Curry), hair and make-up designer (Michael Ward), scenic designer (Richard Hudson), choreographers (Garth Fagan and Marey Griffith), and actors! (Really just everyone involved in the show!)

Actors wore elaborate / intricate costumes featuring the many African animals featured in the movie. I don’t know if the actors were an extension of the animals or the other way around it was so seamless. There was one particular “lioness” and actress who were just so in sync with each other. A head nod or slight movement of the actress’ head would get the exact same movement from the lioness that extended out from her. Mufasa and Scar’s lion masks either impressively sat atop the actors’ heads or with the gentlest nudge would come down in front of their face (usually for the action scenes). Birds would fly from long poles spun rapidly from the actors. Pumba was larger than life. There were fully grown elephants and baby elephants (so cute!), beautiful dancing antelope and an incredible altered bicycle with antelope attached to its top, galloping as the bicycle moved across the stage. The vivid colours, costume detail – and the amount of things my eyes kept going to, amount of animals on stage – would’ve been enough to take in even without the rest of show.

Another thing that delighted me was how close to the movie the musical was – not only with the lines but with the voices and inflections of the actors. The three hyenas (Tiffany Denise Hobbs, Keith Bennett, Robbie Swift) sounded identical to the movie’s actors (kudos to the actor who played Ed – Robbie Swift – laughing maniacally on stage cant be understated). Mufasa, Scar and Zazu’s actors (played by Gerald Ramsey, Patrick R. Brown, and Drew Hirschfield) also sounded so similar to the movie. (That nostalgia!)

I also have a big crush on Mufasa lol.

The musical follows the movie’s plot almost exactly. There were a few lines and a few songs/scenes that weren’t in the original. Personally, I didn’t like the additional songs/scenes. (Lion King purist?) There’s a dance break during Scar’s Be Prepared that just felt a bit weird – with some ab-revealing hyenas doing what felt like a very Magic Mike kind of dance.

Adult Simba (Aaron Nelson) also had a brand new song he performed before making the realization that he needs to return to Pride Rock and I could not have cared less about it.

There were also a few pop culture / location references that were new that I’m not sure worked completely. (A Canadian Tire joke, a caged Zazu singing Let it Go from Frozen, and a different hyena-distracting jingle from Pumba and Timone).

I cried during Mufasa’s death scene but was upset during Scar’s reveal that he killed Mufasa (there was no slow build up: “I….. Killed….. Mufasa!” It was a very quick “I Killed Mufasa” which was jarring for me especially given how closely they stuck with tone/pace/inflection for the rest of the show.

The way they show Mufasa coming back to speak to Simba is incredible. (I uttered “wow” in my seat). The Circle of Life was a feast for the eyes/senses. Rafiki (played by Mukelisiwe Goba) was larger than life!

Overall, it was a truly incredible show. I’ve seen a few in the last couple of years – Les Mis, Wicked, Book of Mormon, Beauty and the Beast, and this quickly shoots up to near-top (I’ve been lucky with having only really seen musicals I would totally recommend!) The pace of the Lion King felt much better / quicker than some of the others I’ve seen. It was about 2.5 hours (7:30 p.m. start, out of there around 10:10) and didn’t feel long. The first act was much longer than second but you never thought “when is intermission?” during the first act.

It was so wonderful I’m going to bring my mom to see it before it leaves Edmonton August 9! Since The Lion King was a Disney staple in our home growing up, when I mentioned we saw the live show to my mom, even her face lit up. “The Lion King?” she said, probably a rollercoaster of nostalgic emotion flooding over her too.

The Lion King Musical was amazing!

Broadway Across Canada’s The Lion King runs in Edmonton until August 9. You must go!

If you have seen The Lion King musical – please tell me in the comments below, what your favourite parts were!

And what are your favourite Lion King songs? I loved the drive home – I kept playing the songs on my phone and even days later, am still humming/singing to the songs!

Linda Hoang is a Canadian blogger based in Edmonton, Alberta, who writes about travel, food lifestyle and pet topics. She's also a seasoned social media/digital strategist with a journalism background. Linda loves exploring the world with her husband Mike, eating their way through cities, supporting local businesses, and photographing Instagrammable Walls. She is the founder of the Edmonton International Cat Festival and a fur-mom to two cats and two dogs.
PrevPreviousRecap + Giveaway: Hudsons Canada’s Pub’s New Menu + Enter to a Win a $50 Gift Card!
NextGiveaway: Show Me Your #MenchiesMyWay + Win a Menchie’s VIP Summer Pass!Next