Over the weekend Mike and I, along with our friend Logan, took part in a media preview for “The Dead Landz” live action zombie apocalypse immersion experience.

The Dead Landz (put on by Simulation Events) is a zombie apocalypse survival simulation game. You live action role play, interact with planted actors in the field, try to survive but also participate in a storyline that unfolds as you play. It takes place at the Silver Creek Paint Ball facility near Camrose, about an hour and 15 minutes outside of Edmonton.

Organizers describe it as if you’re putting yourself in the world of the Walking Dead (with zombie actors and fake weapons) and the goal is to either escape (through completing the storyline) or to simply survive until the time is up. You search for water, food, supplies, and (fake) weapons needed to survive throughout the the day. You need to ‘hide, run, fight and survive.’ 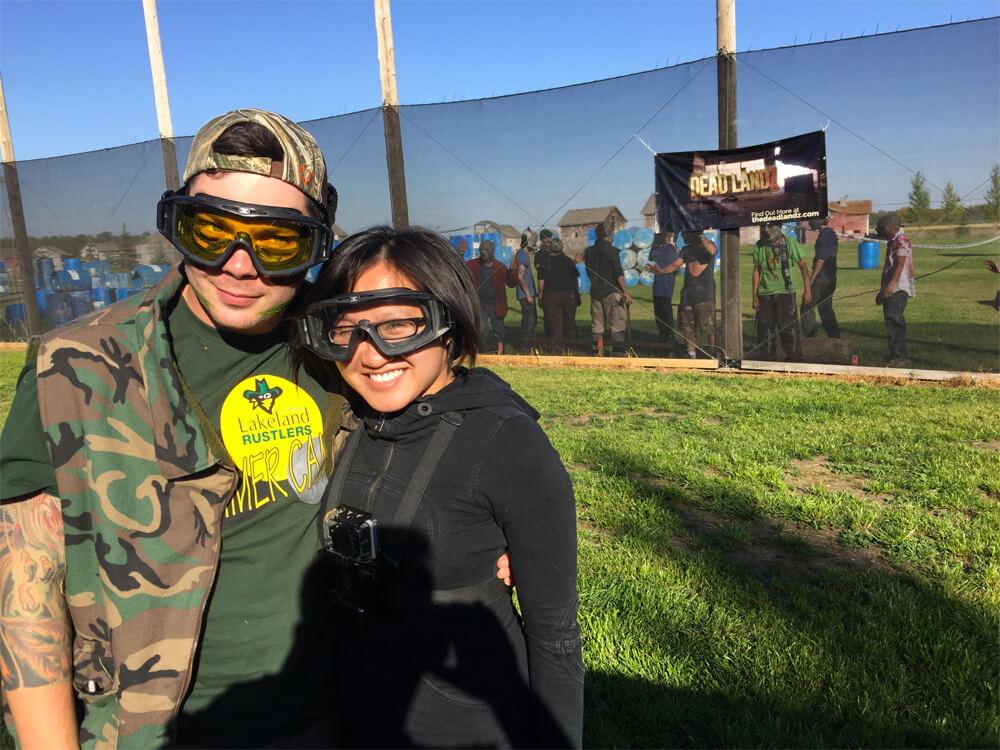 Ready to be dropped into The Dead Landz.

We’ve never done anything like this before so we don’t really have anything to compare it too – that being said, we thought this was the coolest experience!!

We thought the beginning of the game was so intense and amazing. After briefing us, Simulation Events owners Sabrina and Jeff told us they had to check on something with the zombies wait here, so we were just waiting patiently. I turned on my GoPro to get a shot of the fort and the next thing you know there gun shots and smoke and screaming and everyone started running out and Mike was like “I think this is happening!” As we ran out of the fort we saw a zombie eating someone and there was blood everywhere (later we found out they were actors lol). But the sheer terror on everyone’s faces – priceless. We didn’t know where we were running we just ran (I imagine this to be a similar reaction to a real life zombie attack situation).

I tripped a LOT in all the frantic running and chaos throughout the evening. One time Logan and I were splitting a “ration” we had found (granola bar) and just that moment pause allowed a zombie to creep up on us. I tripped trying to run and get away (Logan was able to kill the zombie though so this was not where I got “bitten.”) There was one part when we were climbed up high on an old broken down school bus and hordes of zombies were trying to get to us. Apparently they’ve never had a group climb on top of the bus before – you just never know what each group will do in times of crisis. They told us in a previous game a group had locked themselves in the bus and wouldn’t let anyone in for awhile, lol. 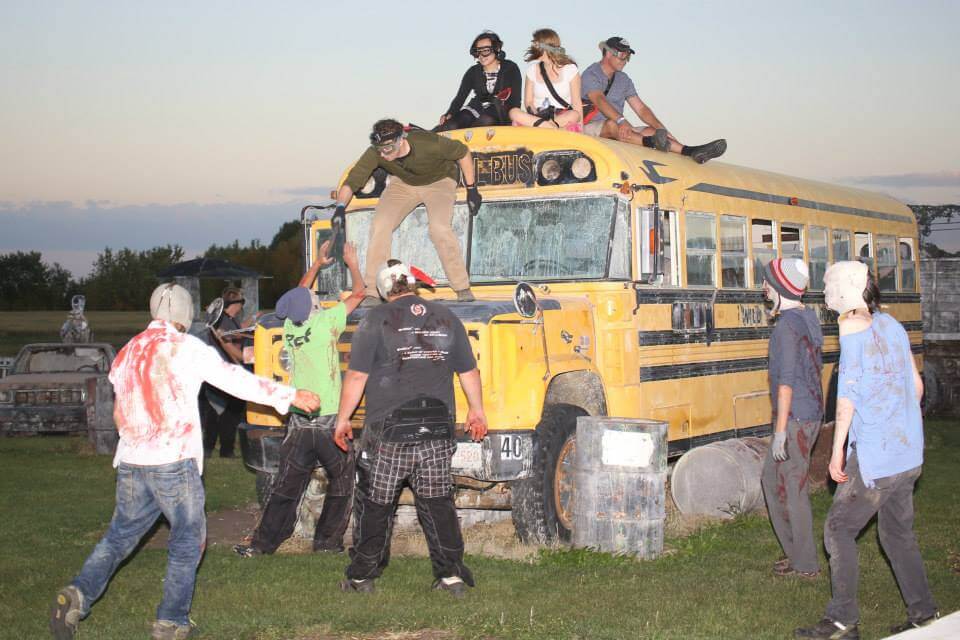 For some reason, someone thought it was a good idea to get up on this bus. Photo credit: The Dead Landz / Simulation Events

It was really cool and surprising how many people were planted in the game as survivors and we had no idea until hours in. I can imagine with a big group how much more distrust and betrayal there would be. They also said our group was one of the nicest they’d ever seen – no survivors turned on each other (except the planted ones). In fact some survivors were giving weapons to other ones who didn’t have any. For what they anticipate for the October 17 event – with upwards of 200 people – I just think you’d be paranoid and untrusting of everyone! Plus there would be less places to hide for sure, without running into either other people or zombies. I shudder thinking of it. 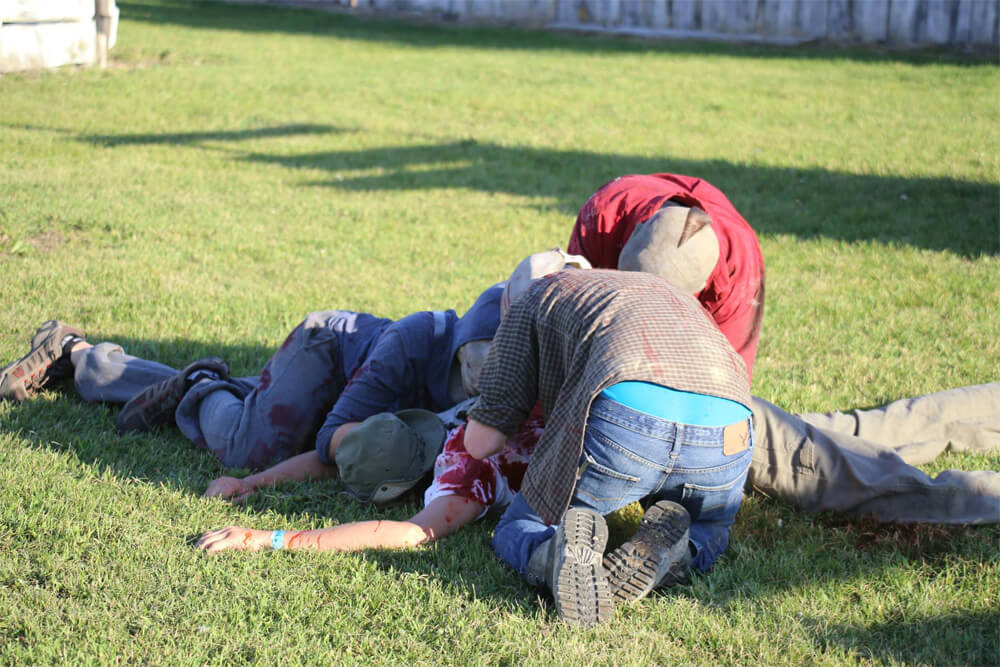 Mike was the first of the three of us to die. It was my fault because I told him to sneakily grab a bag from one of “the Crazies” and she saw him and shot him (personally I think he could’ve run faster or move in more of a zig zag motion to try to avoid the bullet). He tried to run to the medic but when he couldn’t find him he dropped to the ground for an epic death scene where the zombies descended on his body and all you could hear was “AUUGGGH MY EYEBALLS!” It was pretty funny. Later on we would encounter a zombie and easily kill him and then I noticed the zombie had the same shirt on that Mike once had when he was alive so not only did I send my husband in to become a zombie I then killed him again as a zombie! Ha ha. 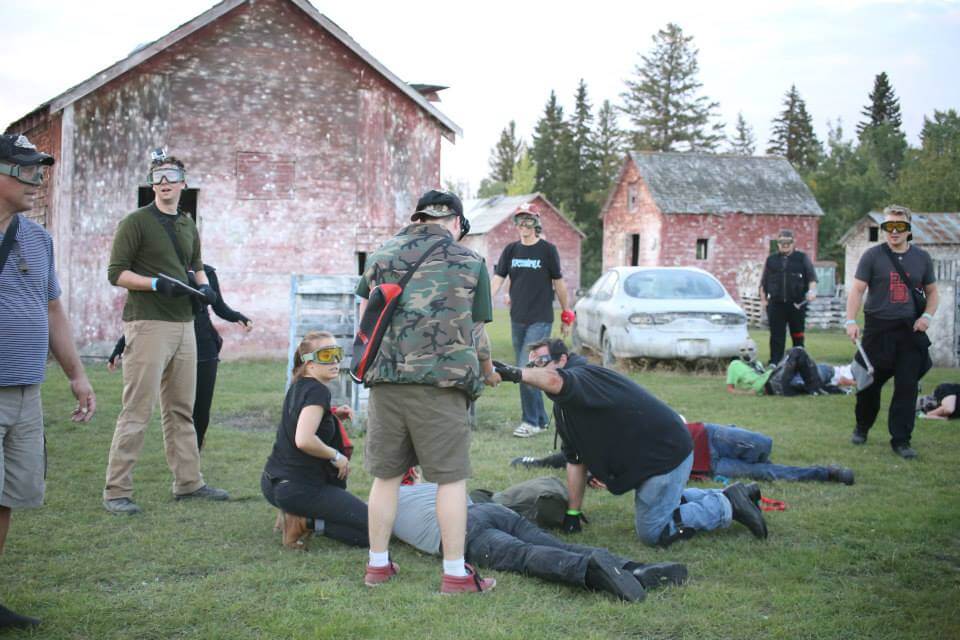 Mike with the medic and a (fake) wounded player. Photo credit: The Dead Landz / Simulation Events

Mike died before finding a weapon – in fact, it took a very long time for the three of us to find any weapons. Logan found one first so he was our protector for the longest time (though couldn’t protect Mike from the gun shot lol). I got a hammer weapon a couple hours in when the survivor who had it, dropped it and turned into a zombie. When you die in the game, you go back to the starting point and get done up/briefed on how to be a zombie! So you’ll get to experience both sides (unless you’re so good and you end up being a survivor til the very end). 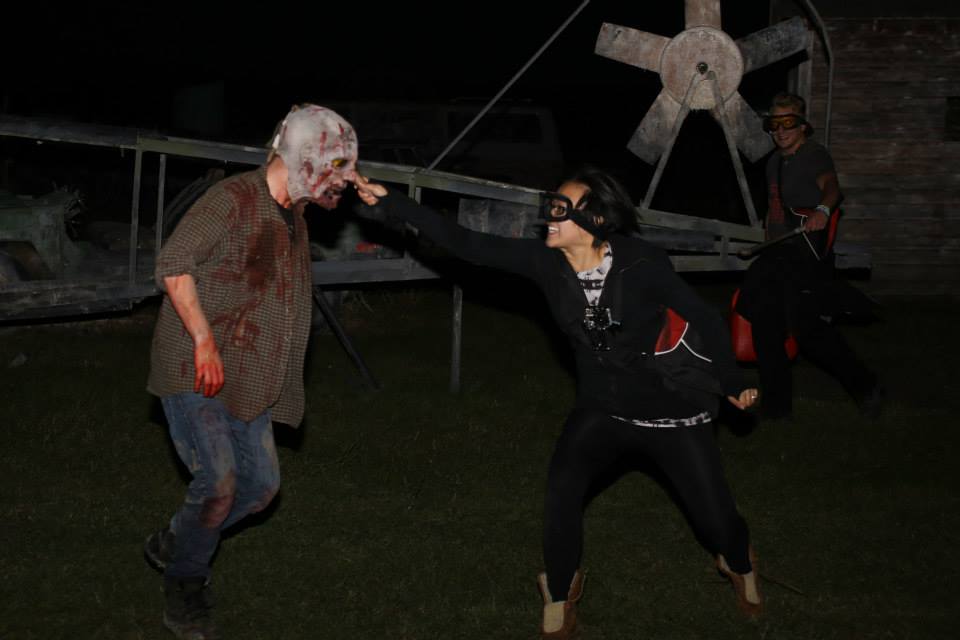 This is how I kill zombies – boop! Photo credit: The Dead Landz / Simulation Events

Logan and I were among the last remaining survivors (there was about seven of us at that point). I unfortunately got bit in my arm and the medic tried to save me but then whispered that I would re-enter the group and then have to turn in 2 minutes. Obviously I chose to betray Logan and take him down with me – he was not happy. 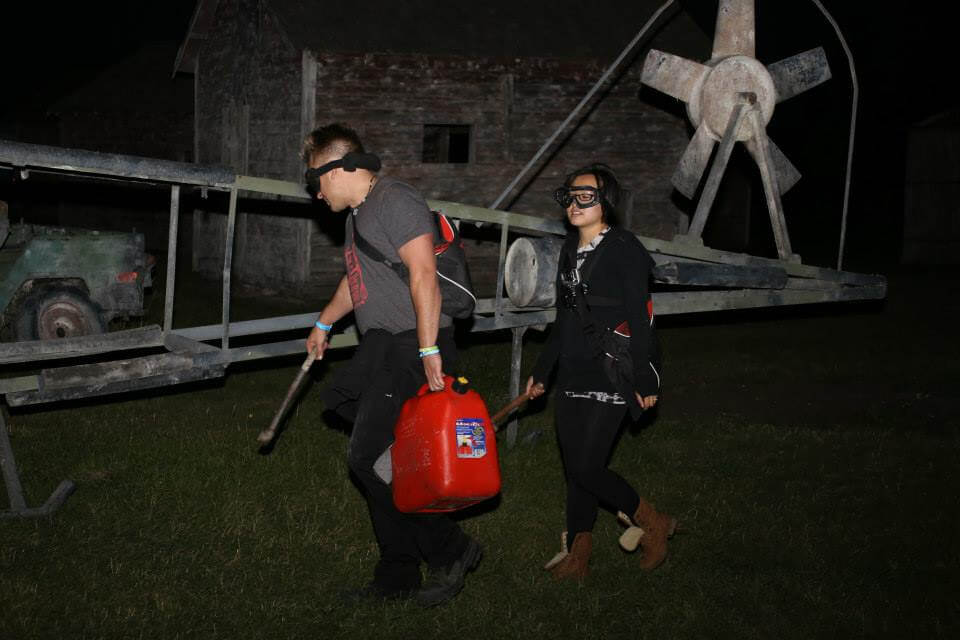 Working together (before I turned and betrayed him). Photo credit: The Dead Landz / Simulation Events

Although Simulation Events tries to immerse you into the zombie apocalypse scenario fully, there are definitely parts that take you out of the game. For example, asking a dead zombie if he has any loot and he replies “nah” kind of kills the realism. Also another one who says “I haven’t had loot all day” lol. When Mike was a dead zombie and I asked him for loot he grunted “ugnhhno” and another zombie nearby laughed. As well, our team was taking so long to find the proper items for the mission that sometimes the military guy would break out of character to help us. Also if you need to go to the bathroom – in this half day setting there were no bathrooms on the playing field so when you need to walk out to go to the bathroom it sort of takes you out too. 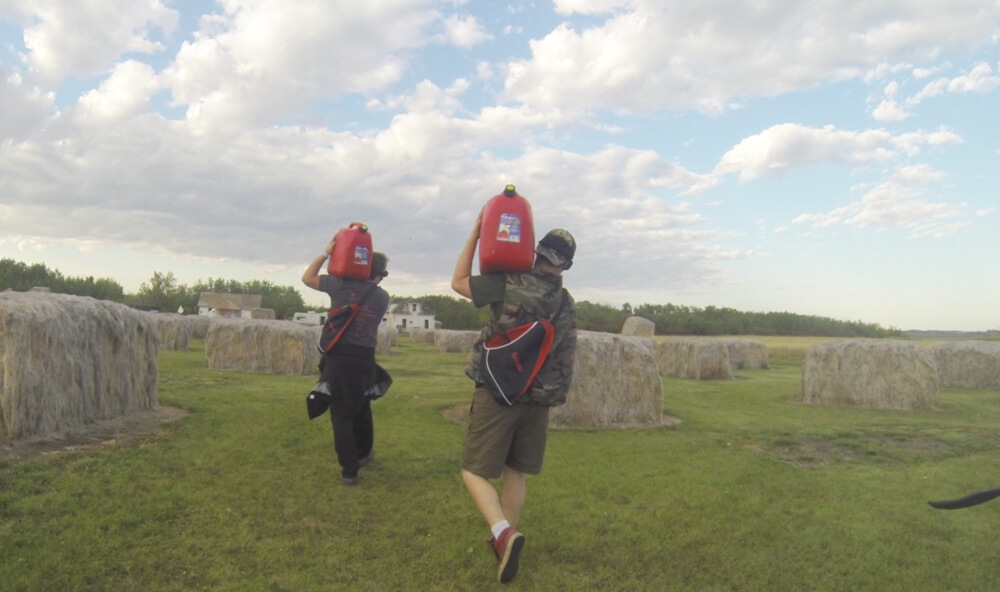 Carrying around the fuel cans in a post-apocalyptic world.

The only thing I didn’t really like with this game is if you have glasses, your vision / comfort will be compromised. You’re required to wear googles over top of your glasses and it’s a very tight fight. Your glasses will end up pushed up uncomfortably against your face and depending on frame size, you might start seeing the frame out the corner of your eye because of how the goggles push up. My goggles also kept coming off my face quite a bit because of all the running and my glasses would also fog up quite a bit. Also once I became a zombie, it was very hard to see through the mask (glasses felt squished under that too) but also it was very dark out by the time I ended up being a zombie so I probably could’ve seen a bit better if I had died during daylight.

The GoPro died before things got too crazy so I don’t have a lot of close up video of zombies lol @thedeadlandz #yeg pic.twitter.com/5VK7CbHlQz — Linda Hoang (@lindork) September 13, 2015

We also thought the story line seemed to drag out a little bit at times, and before we entered the simulation, they were telling us that sometimes the full day experience participants can get a bit bored after a few hours (but then you get a new injection of players and storyline advances so the action picks up again). Logan felt he could’ve had just as much fun running around – surviving and looting, but I appreciated the effort put into the story line and the planted actors and their tips (or misleading information) shared throughout the experience. 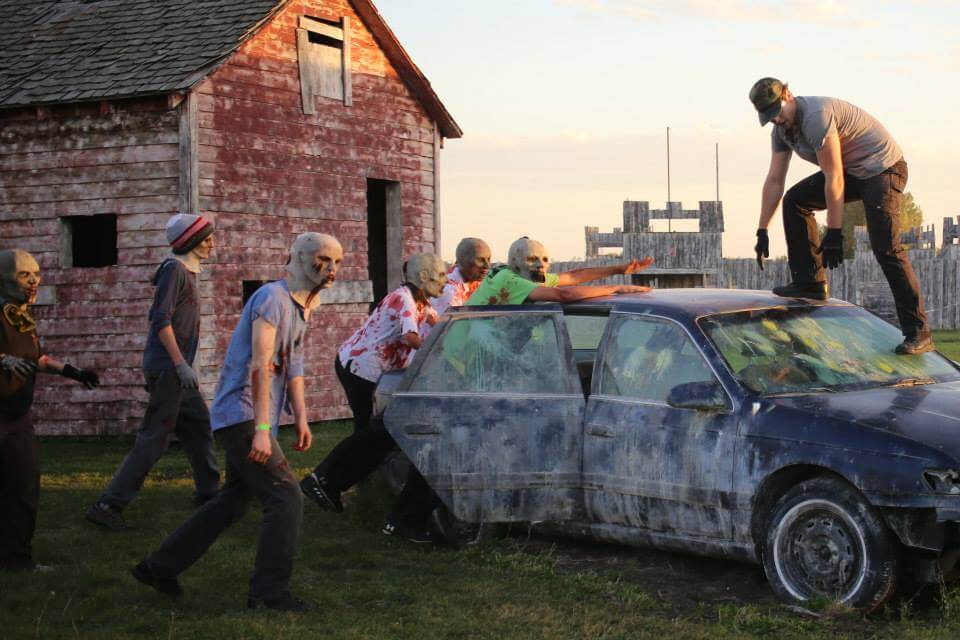 The price points for The Dead Landz are quite high, but for the amount of hours you’re looking at – and the pretty unique experience, I’d still do it (at least the one time).

For their upcoming event on October 17, you’re looking at:

If you want more of a scary experience, I think the $99 evening 5 – 10 p.m. rate would be better than the full-day experience. Given that it will be mid-October, it should get pretty dark pretty quick. Personally, I prefer it lighter out because I’m a pansy, lol. As Oct. 17 is leading right up to Halloween, I think this is a perfect opportunity to round up your friends and see how you’d fare in a zombie apocalypse situation. 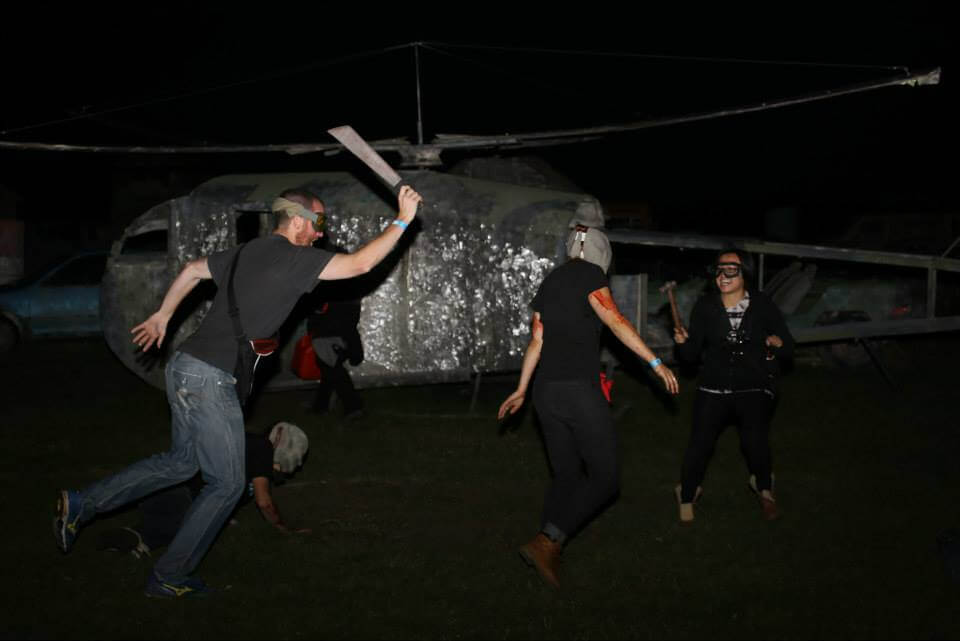 Tactic: try to distract a zombie so someone else can sneak in from behind! Photo credit: The Dead Landz / Simulation Events

Here are my some of my tips for getting the most out of The Dead Landz Experience: 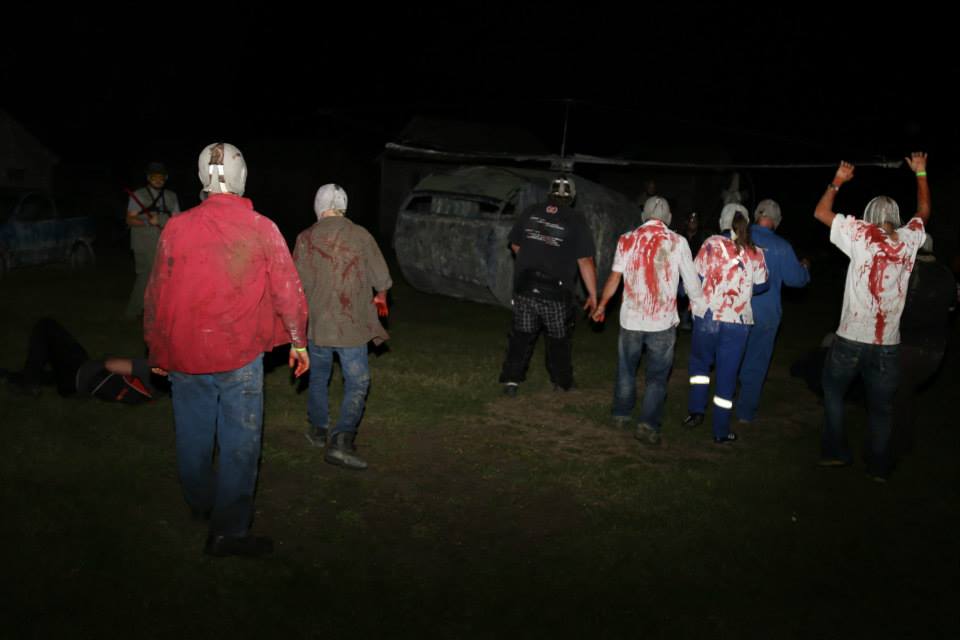 Overall, The Dead Landz zombie experience was so cool! It’s just a fun, unique thing to do (around Halloween or just any time). It also really gets you thinking how you might behave in a real-life situation. It is also such a great work out! You’re literally on your feet for hours at a time. The next day(s) (even once we got home that same evening, we were feeling incredibly sore). Mike, Logan and myself all agreed that we would do this again (the Oct. 17 date doesn’t work for us, but we’re looking forward to gathering up a bunch of our friends and doing it again next spring/summer!)

Have you ever tried The Dead Landz zombie experience? Or a similar apocalypse kind of event?

P.S. Mike and I finally started watching The Walking Dead after coming home from this event, lol.

Disclaimer: I will always provide my 100% honest opinion on this blog. I was invited to The Dead Landz media preview as a guest. This has no impact on opinions stated in this post.

Linda Hoang is a Canadian blogger based in Edmonton, Alberta, who writes about travel, food lifestyle and pet topics. She's also a seasoned social media/digital strategist with a journalism background. Linda loves exploring the world with her husband Mike, eating their way through cities, supporting local businesses, and photographing Instagrammable Walls. She is the founder of the Edmonton International Cat Festival and a fur-mom to two cats and two dogs.
PrevPreviousSocial Media Notes (#84) – Links for the Week of September 7 – 13
NextGiveaway: Enter to win free 50/50 burgers at White SpotNext