Recap: Have you eaten a Ford lately? at NAIT Ernest’s 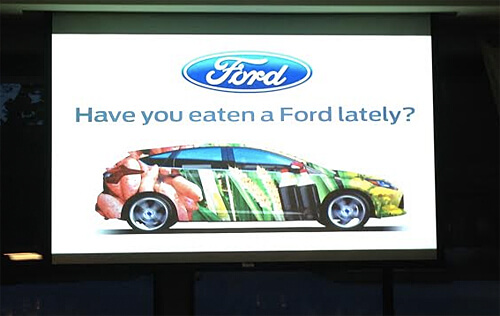 A few weeks ago Mike and I had the pleasure of attending the “Have You Eaten a Ford Lately?” event hosted at NAIT Ernest’s restaurant. The event was put on by Ford Canada (/Focus Communications) and was really a night where guests learned more about Ford’s sustainability efforts over delicious food made using biofuels that are also found in Ford vehicles. A very interesting concept! 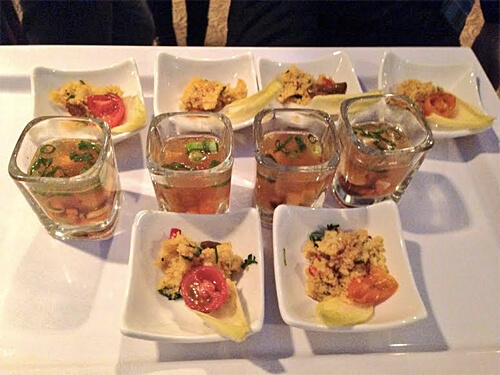 Oriental Hot Shooter with Tofu and Curried Raisin Couscous on Belgian Endive at Have You Eaten a Ford Lately? event.

During cocktail hour we were served Oriental Hot Shooters with Tofu and Curried Raisin Couscous on Belgian Endive. The biofuel-used-in-Ford-vehicles element of this dish is that soybeans are used to create foam in Ford seat cushions, back and head restraints. Neat! 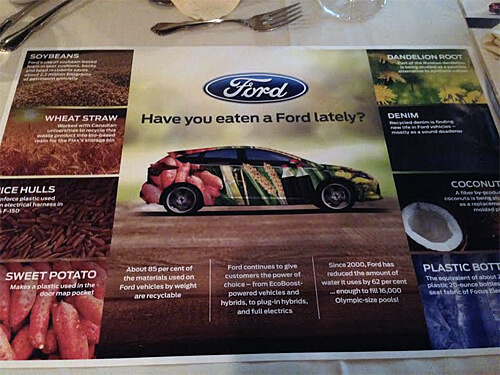 Informative placemat at Have You Eaten a Ford Lately? event – all the different biofuels used in Ford vehicles.

When we sat down for dinner, we were greeted with a super informative placemat that talks about all the different biofuels Ford features (or is thinking of featuring) in their vehicles.

Here are the highlights: 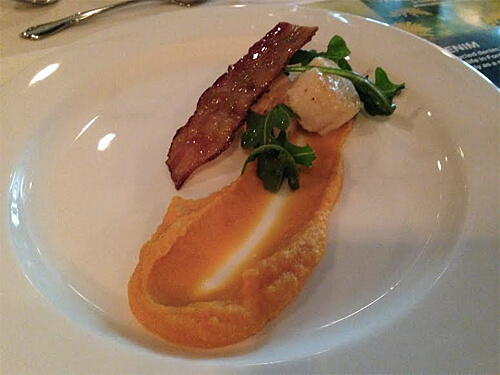 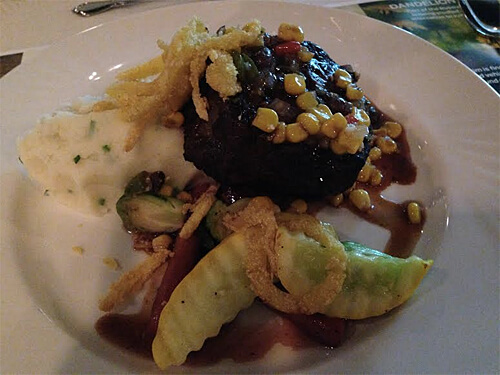 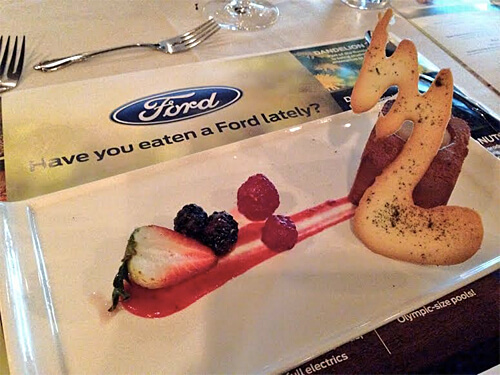 And for dessert – no biofuel connection but it was a Guittard Chocolate Mousse with Melba sauce, Lavendar tuile, and Macerated berries. I’m not huge on dessert so the chocolate mousse was a bit rich for me, but the macerated berries were divine!

The food was all prepped, cooked, plated, etc., by NAIT Culinary Arts students. I say again and again and will probably say it a million more times – but these students are so talented and I’ve never had a bad meal at Ernest’s! So good. The student chefs introduced themselves and made punny Ford food jokes before dinner started. We all applauded them afterwards for a dinner well done. 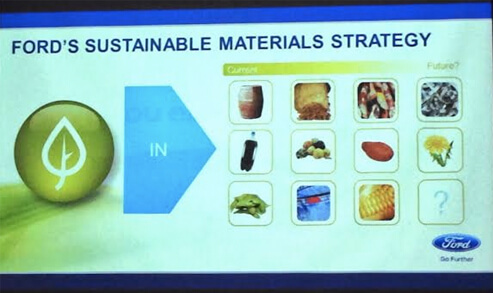 Ford is all about sustainability!

After dinner we learned more about Ford’s sustainability history and current efforts from Dean Geddes, the company’s Marketing Strategy manager. Here are some of the tweet highlights:

In the 40's Henry Ford started using soy in plastic panels to kick start the economy for farmers! #yegfordgreen pic.twitter.com/oRyRhcsBCx

85% of the materials used on Ford vehicles are recyclable. (Also tasty.) #yegfordgreen

I really wasn’t quite sure what to expect coming into this event (we joked that we’d be eating dinner on hubcaps!) But it was a very interesting (and delicious) night. Mike and I currently own a Ford Escape so we are already pretty pro-Ford so it was fascinating to learn about the company’s green efforts and to see them taking sustainability so seriously.

There was also an interesting mix of guests at the event – there was representation from those in the automotive industry/blogosphere, as well as representation from the food lovers (I’d be on in the second group!) I thought it was a clever way to bring together these two groups and highlight all the interesting work the company is doing to go green. 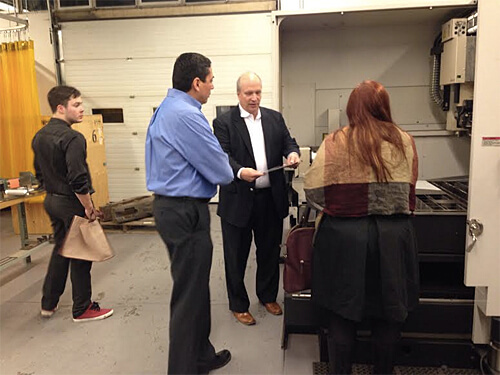 Afterwards guests also had the option to go for a tour in the NAIT Culinary kitchens (always interesting to see if you haven’t done it before I recommend you check it out!) and a smaller group also went with NAIT President & CEO Dr. Glenn Feltham on a tour of the Shell Manufacturing Centre – a place home to lots of tools used to by industry to create and test fantastic things (including the Enviro Chamber that lets you test products in temperature extremes, and the 3D plastic printer, to name a few cool tools).

All in all, very cool event! Thank you to Ford/Focus Communications for the invite. :)

Linda Hoang is a Canadian blogger based in Edmonton, Alberta, who writes about travel, food lifestyle and pet topics. She's also a seasoned social media/digital strategist with a journalism background. Linda loves exploring the world with her husband Mike, eating their way through cities, supporting local businesses, and photographing Instagrammable Walls. She is the founder of the Edmonton International Cat Festival and a fur-mom to two cats and two dogs.
PrevPreviousSocial Media Notes (#20) – Links for the Week of Feb. 24 – March 2
NextSocial Media Notes (#21) – Links for the Week of March 3 – 9Next