This is obviously a very belated post but I figured if I got it done before Christmas then it’s still valid!! :)

Pinterest proved to be a great resource for Halloween food ideas this year! (Click here to see the Halloween food ideas I pinned on my Pinterest page!) I found a few appetizer/party snack dishes that I knew I wanted to try. I would have done more had we hosted a Halloween party but we didn’t so I just made a few to get into the spirit of the season. 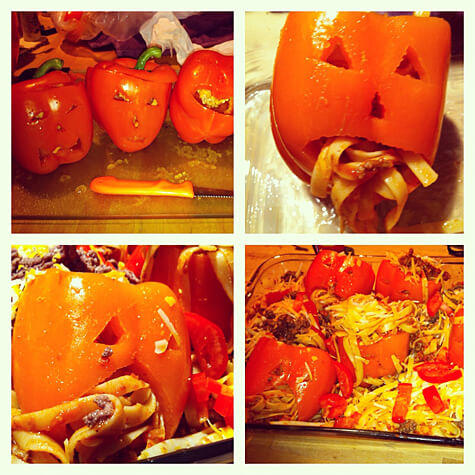 One of my favourite entree Halloween-themed dishes that I saw on Pinterest were oozing pasta-stuffed bell pepper jack-o-lanterns! I’ve made ground beef and rice-stuffed bell peppers for regular no-theme dinners before so when I saw this spooky variation I knew I wanted to try it! 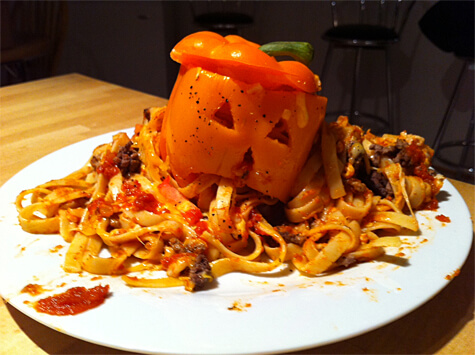 I used orange bell peppers, ground beef, pasta and pasta sauce (plus salt, pepper, other seasonings). I probably should have used spaghetti pasta for a better oozing insides effect but I ended up using fettuccine which still worked but I think the insides look would have been better with spaghetti.

Recipe is basically pre-cook your ground beef and other fixings you like on your pasta, olive oil grease up your peppers (after having cut out the top and the jack-o-lantern face), stuff with beef and pasta and sauce and then throw in the oven for about 20 minutes on 375 F.

The end result tasted great and looked even better!! 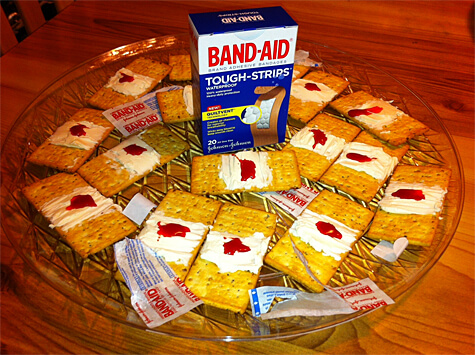 Some of the Halloween snack food I whipped up with Mike included bloody Bandaids!!! Ew. ;) The Bandaids are made of a cracker – not the right cracker, it was an herby, healthy cracker as opposed to the graham cracker the recipe called for but I couldn’t find it at the store. Lol. The white centre is cream cheese and the red blood is an decorating food gel. Add bandaid box and real bandaid wrappers to get the authentic effect!

The bloody Bandaids were probably the tastiest of the three snacks we made. 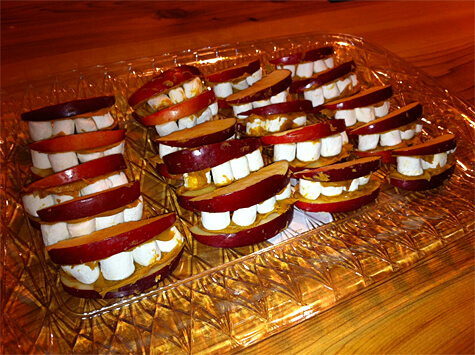 Next up were rotting gums apple marshmallow teeth lips. Super easy, sort of healthy? They are cut apple slices that are coated with peanut butter to hold mini marshmallows. This one is not bad – apple and peanut butter go well together generally so they do here too! I dislike marshmallows so it was weird to me but works if you’re into marshmallows lol. 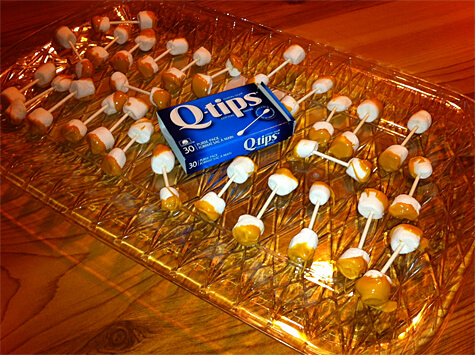 The most icky (awesome) looking Halloween snack we made are Q tips with ear wax on the ends!! The white stick was ripped from actual Q tips. The ear wax is melted butterscotch chipits! (Or no name brand “chipits”) and its mini marshmallows dipped into that butterscotch.

This is another case where adding the box to the plate makes it look super authentic. This snack looked awesome but had a huge issue in that the butterscotch hardened quickly and hardened onto the plate so if you tried to pick up a “Q-tip” you had to pull hard and you’d end up losing a chunk of butterscotch or the marshmallow itself! Fail. Likely won’t be making it again! 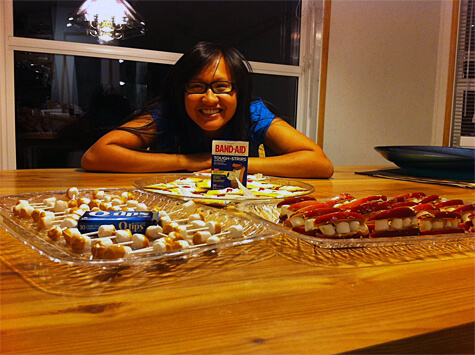 With my Halloween food creations!

Overall it was fun creating Halloween-themed food! It really got me in the Halloween mood and made me want to throw a Halloween party so I could do more!

These are some of the foods I made last year: 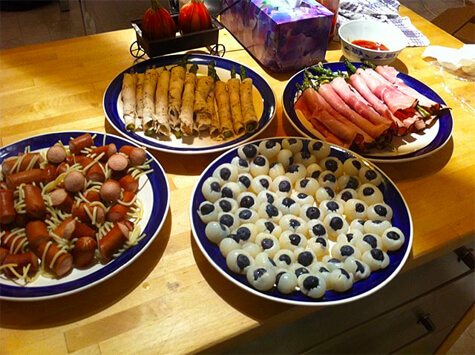 Hopefully I can try bigger and bolder (maybe healthier) recipes next Halloween!!

Linda Hoang is a Canadian blogger based in Edmonton, Alberta, who writes about travel, food, lifestyle and pet topics. She's also a seasoned social media/digital strategist with a journalism background, the founder of the Edmonton International Cat Festival and co-founder of Stop Race Based Hate, an online anti-racism education tool. Linda loves exploring the world with her partner Mike, eating their way through cities, supporting local businesses, and photographing Instagrammable Walls. Linda is a fur-mom to two cats and two dogs.
PrevPreviousNews Online: Paul McCartney allows animal advocacy group to lobby at Edmonton concerts
NextClicks of the Week: November 26 to December 3, 2012 EditionNext