There are so many tasty deals and food specials going on in Edmonton this month – because June is Pork Month!

To celebrate, Passion for Pork has teamed up with restaurants in Edmonton and Calgary to offer special, Alberta pork-themes dishes.

The participating restaurants in Edmonton include:

(Click here to see the participating restaurants in Calgary)

Last week I had an amazing evening going on a “pork crawl” with my friend and Passion for Pork blogger Sharman (@ThePorkGirl), Chris (@shorelinegold) and Andrea (@littlmissandrea). We hit up five Edmonton restaurants to try their pork specials and help promote Pork Month!

Before I get into that, I also wanted to add that Passion for Pork is also involved in Porkapalooza, which takes place June 19-21. Porkapalooza is basically a big, fun BBQ competition at Borden Park – but there’s also food vendors, tons of entertainment, a ribfest, food fight challenge, and more! Porkapalooza’s Bare Bones RibFest is on Friday night (June 19). It costs $10 to get in and then $1 for each additional ticket to get ribs from five vendors. I’m giving away a pair of admission tickets for Porkapalooza’s RibFest!

Scroll down to get to the ticket giveaway, but first – a quick recap of our pork crawl!

We started off #yegporkcrawl at one of my favourite Edmonton restaurants, North 53! Chef Josh Dissanayake’s Pork Month offering is Alberta Pork Buns. 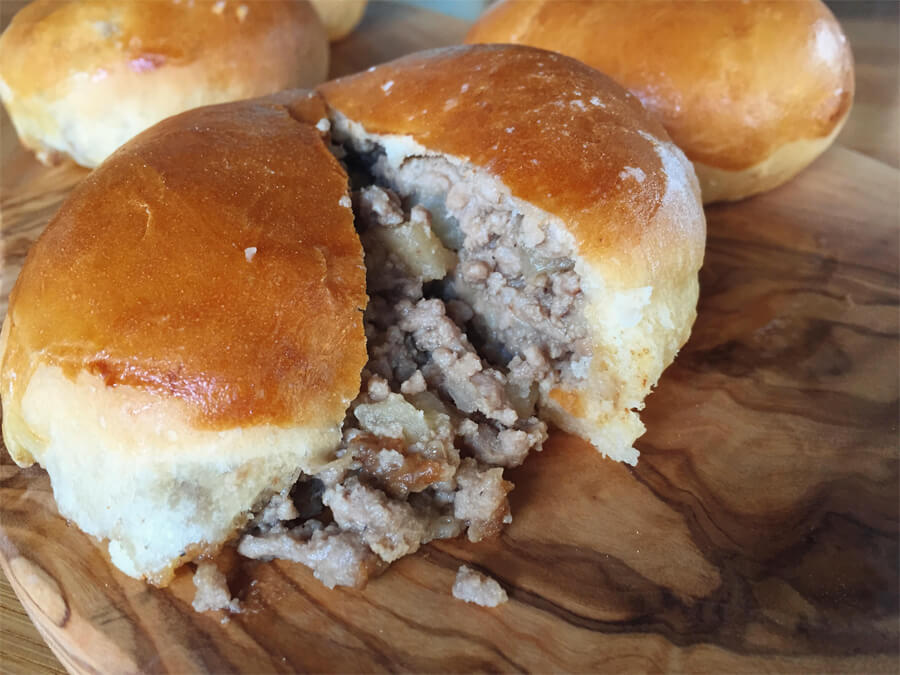 They are basically Asian-inspired steamed buns filled with ground Alberta pork and Josh’s delicious seasonings. It costs $4 for one bun. I loved the buns, and loved hearing Josh’s inspiration behind the dish: his mom used to regularly make him pork buns to take to school. They were delicious, but he remembers trading the buns with other classmates so he could try their food. No trades necessary here – just take my money Josh!

Next up was Tzin Wine and Tapas for the Pinchitos Morunos (Moorish pork skewers). 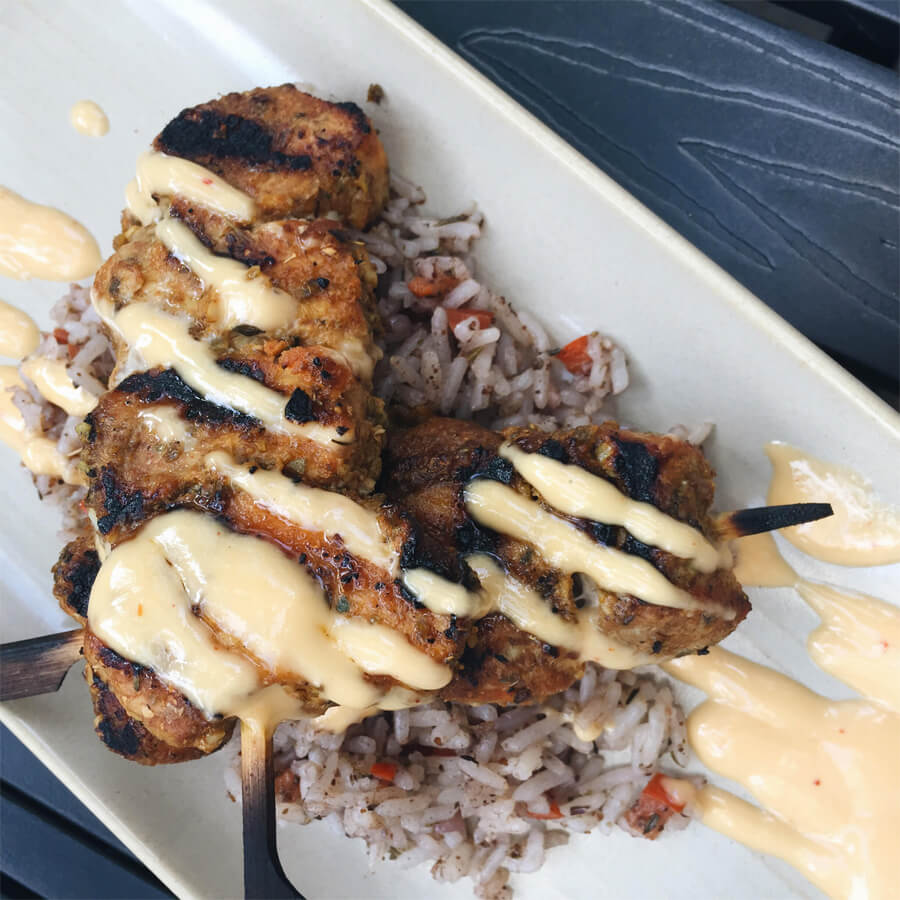 The skewers are seasoned with several spices including saffron, coriander, cumin and paprika. If you don’t like those spices, these might not come off as tasty, but the meat itself was nice and juicy. We also got to try Chef Corey McGuire’s famous BACON dish – which is basically the most amazing, crispy pork belly with a maple balsamic apple compote and apple mayonnaise on a crostini, with calvados gastrique. 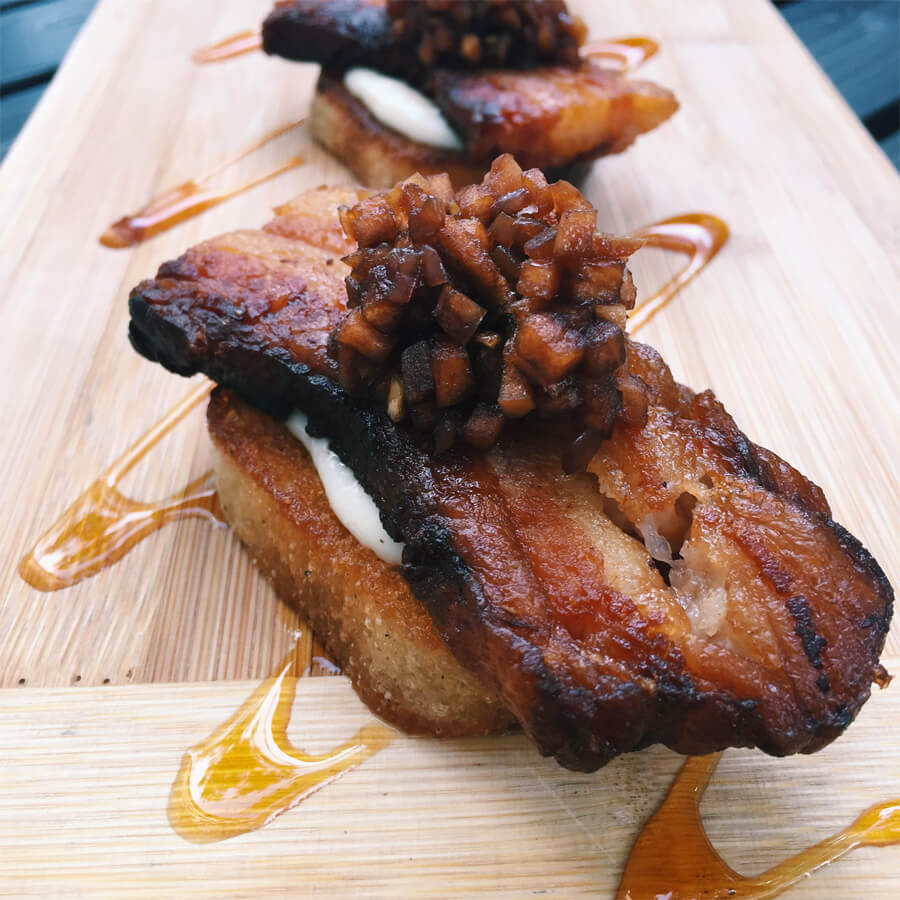 I often talk about dishes that “change my life” (just an expression, obviously, but a nice barometer), really it just means dishes that are so damn good. Tzin’s Bacon = so damn good. And it nicely fits the Pork Month theme! I would absolutely recommend getting the Bacon! The Bacon is $16 for 3 crostinis, and $21 for 4. The skewers are $17 for two skewers with rice. As a side note, I am also so impressed with what Chef Corey can do what he can do in Tzin’s tiny kitchen! Apparently it’s the smallest restaurant kitchen in Edmonton. It was my first time at Tzin but certainly not my last!

Our mid – #yegporkcrawl stop was at the Fairmont Hotel MacDonald patio. Both of the Fairmont’s restaurants – the Harvest Room and the Confederation Lounge – are offering pork specials. You can order their 1915 Pork Stew – which comes with a really flavourful pork stew with corn bread and one beer of your choice. 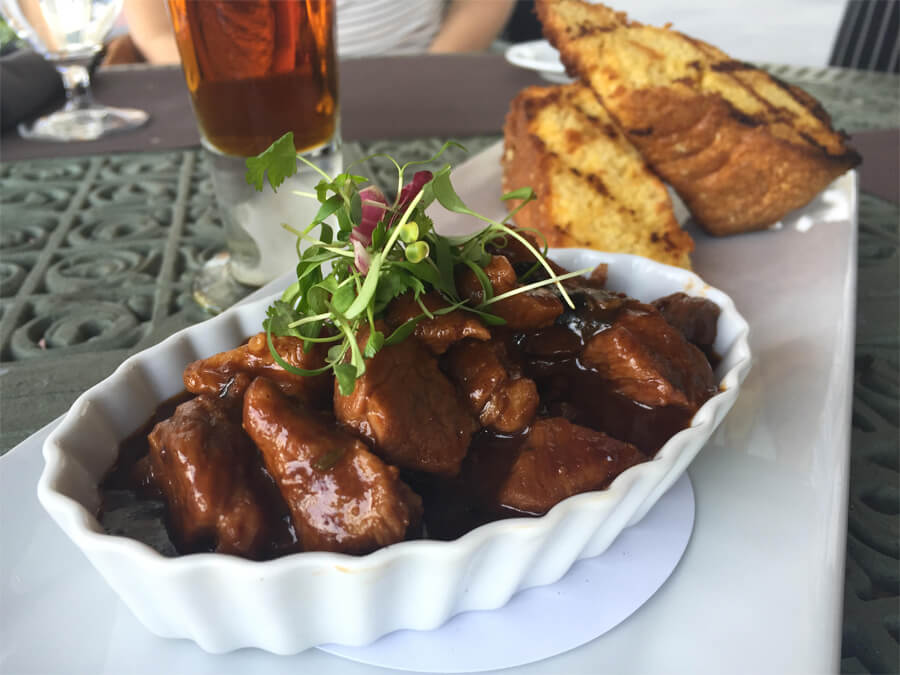 It costs $19.15 and is also tied into the Fairmont’s 100-year anniversary! You wouldn’t think a stew would really work on a patio in the summer, but this stew is really good. Even better – the $17 pork belly sandwich. Oh my gah. So good. You can order the stew at any time, but the pork belly sandwich you can only normally get a lunch. 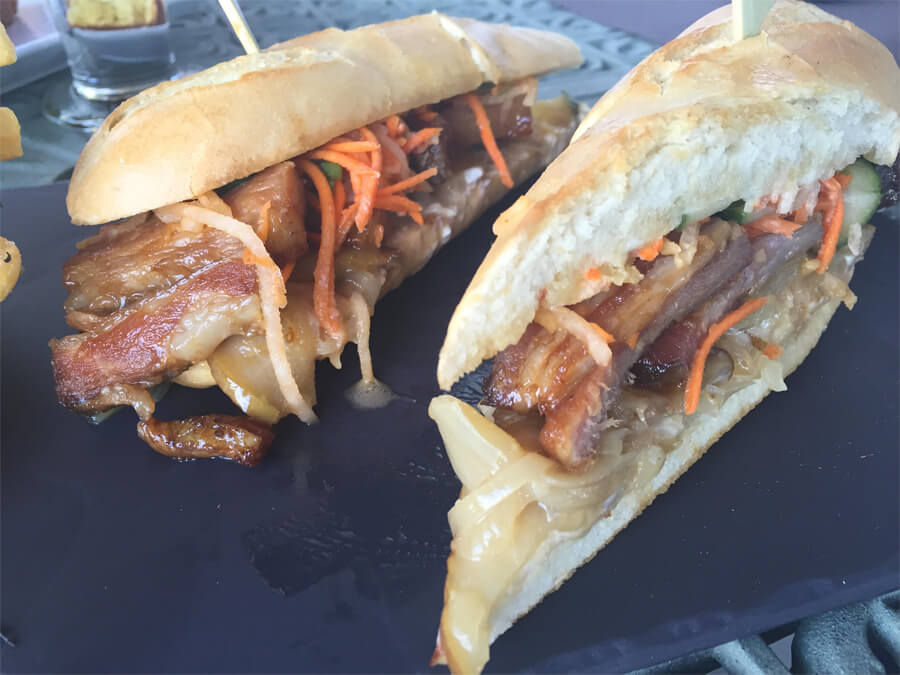 I thought the fries that accompanied the sandwich weren’t anything to rave about, but the star is really that pork belly! The sandwich I also felt had a Vietnamese banh mi-style influence with the pickled carrots/veg. There’s also a gluten-free duo of pork option for Sharman, which is also on the regular menu (at $36) and features a cardamom crusted nagano pork, slow cooked caraway citrus pork belly, yukon gold potato pave, mustard greens and cilantro yogurt ($36). 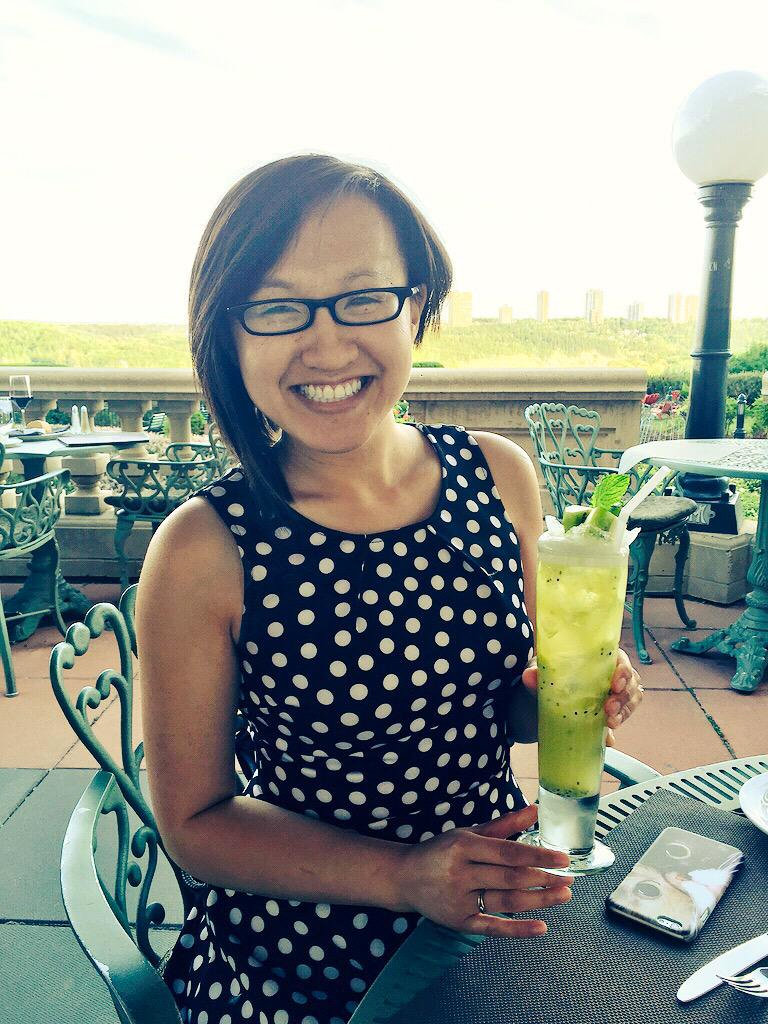 I love you Kiwi Sapphire Tonic.

I also ordered the Kiwi Sapphire Tonic drink (extra kiwi) which was one of the best drinks I’ve ever had. (Rivaling that of the amazing pearjito from XIX Nineteen). Chef Serge Jost was also such a pleasure to talk to (like always!) and the patio has such a fantastic view.

Feeling stuffed, but determined, we carried on to the next stop on our crawl: Share at the Westin Hotel. The Westin’s Chef is Ryan O’Flynn – who recently won the national competition Gold Medal Plates. His Pork Month offering is pork belly with arancini and morel mushrooms ($22). 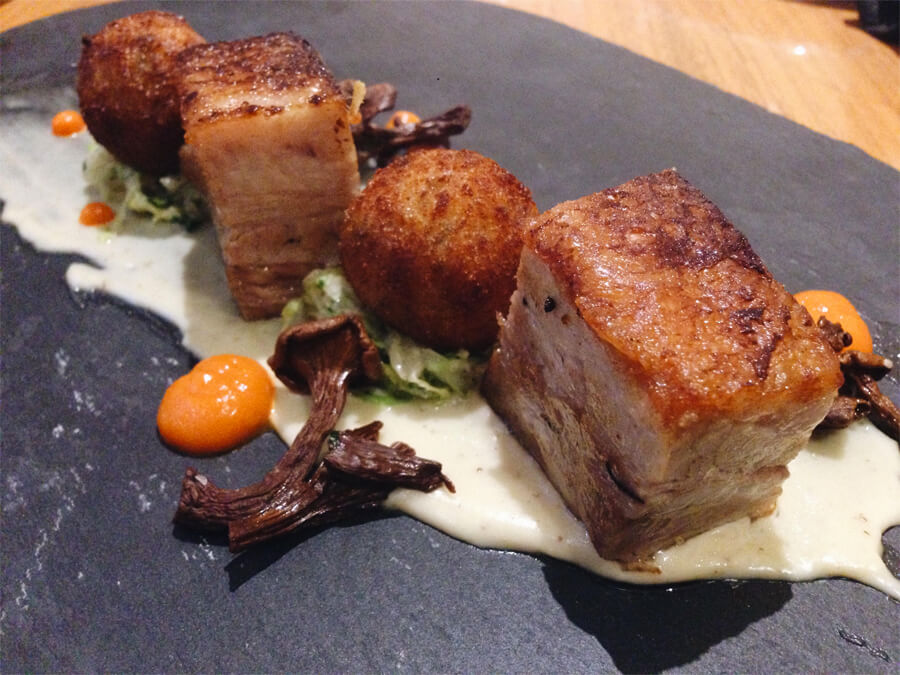 I thought the pork belly was solid, arancini was creamy, crispy and delicious, but the morel mushrooms weren’t as good as I wanted them to be. Also though, my stomach was feeling pretty full at this point so I don’t think that helped.

So, you would think four places would’ve been enough on our pork crawl – we certainly could’ve wrapped up after Share, but Sharman really wanted us to try Packrat Louie / Chef Andrew Cowan’s pork offering south of the river. We happily obliged! Packrat is offering Pork & Foie Gras Bratwurst for Pork Month. 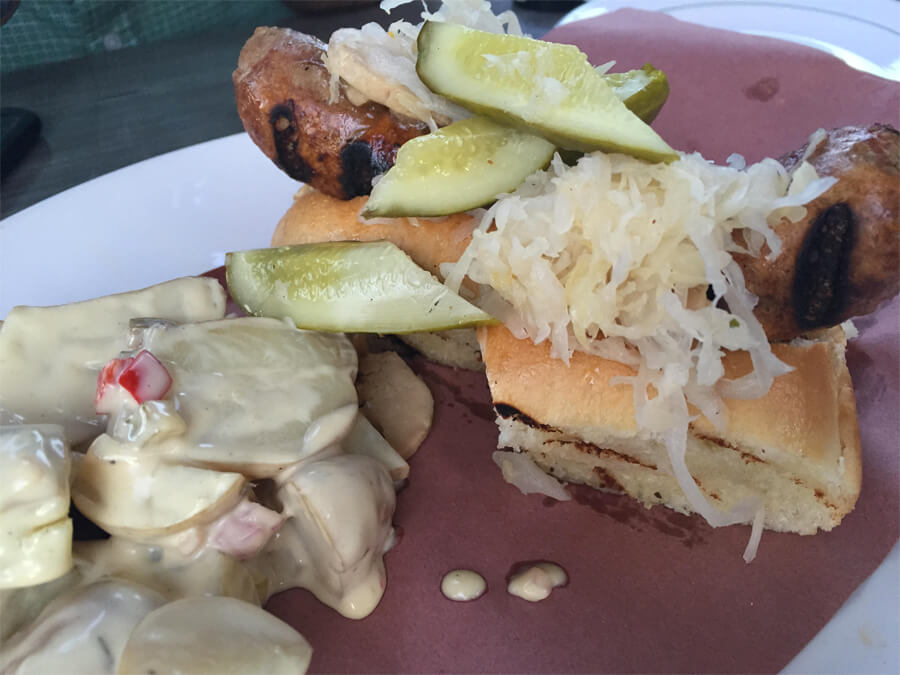 It includes ground Alberta pork shoulder mixed with foie gras, on a bun, topped with some foie gras, with a side of potatoes. I found the bun to be a bit too thickly cut for me, but the bratwurst with foie combination was quite good. The potatoes – at that point in the evening – I couldn’t even think about touching, but admit that the plate felt a bit hastily put together.

Overall, our #yegporkcrawl was SO FUN! and delicious. The company was also fantastic. I love eating with people who love eating as much as I do! 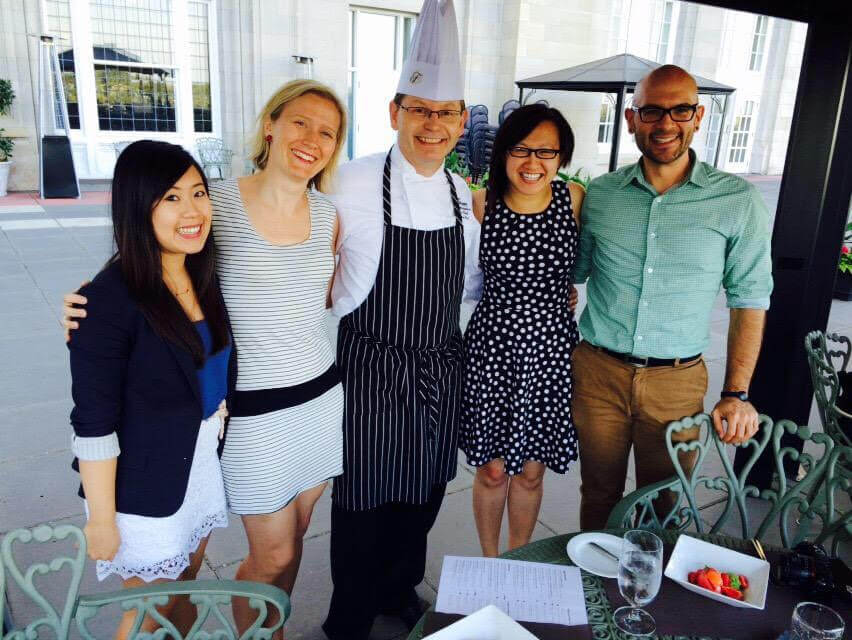 I will happily food crawl with these beautiful people any time!

On the Fairmont Mac patio, we felt like leisurely ladies for sure!

Thank you so much Sharman / Passion for Pork for having us out to try some of these amazing pork dishes. I will be back so fast. (In fact I headed back to the Fairmont later in the week for lunch and will hit the patio again next week with friends for the pork specials and the Kiwi drink!!)

I will also be at Porkapalooza over the weekend – and am excited now to give away a pair of admission tickets to RibFest!

ENTER TO WIN A PAIR OF ADMISSION TICKETS TO PORKAPALOOZA’S RIBFEST (JUNE 19, 2015)!

I’m giving away a pair of admission tickets to Porkapalooza’s RibFest (valued at $20). Find out more information about RibFest (including participating vendors and entertainment) here! Please note the tickets get you into RibFest, but you still need to purchase your own tickets for food ($1 per food ticket).

There are multiple ways to enter – but tweeting this exact sentence is mandatory:

You must tweet the above sentence in order to be eligible for this contest.

Please note comments are moderated so don’t worry if your comment doesn’t appear right away!

This giveaway closes on Wednesday, June 17, 2015 at 10 p.m. I will randomly choose a winner based on the entries after the contest closes.

Good luck, spread the word, and if you’re not sure about your chances: just go buy RibFest tickets here!

There’s also a great Father’s Day Brunch special you can get tickets to as well!

Congratulations to Salina D. – the winner of this giveaway!