Laser City is located in the Edmonton Paintball Centre downtown at 10010 107A Avenue.

They officially open Friday, October 16, but this weekend I was invited to come try/preview Laser City ahead of its opening. 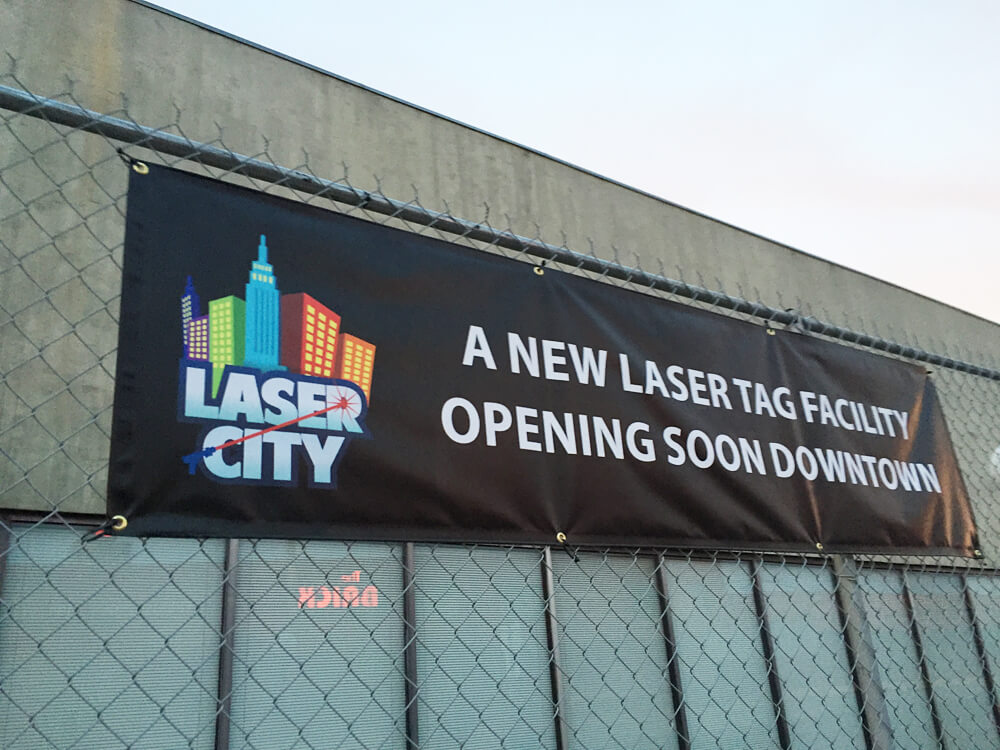 Laser City becomes the first laser tag facility in the downtown area (since Laser Quest moved to the north west end). Upon researching for this blog post, I also discovered there is apparently a mobile laser tag company that can come to you, and also a laser tag room within the Gateway Entertainment Centre.

Laser City’s prime location, themed games (including a game that has bots on the field shoot back at you), and really responsive, spiffy technology helps set them apart from the others. Also their kid-friendly super hero-themed laser tag is sure to be a hit with young Edmontonians! 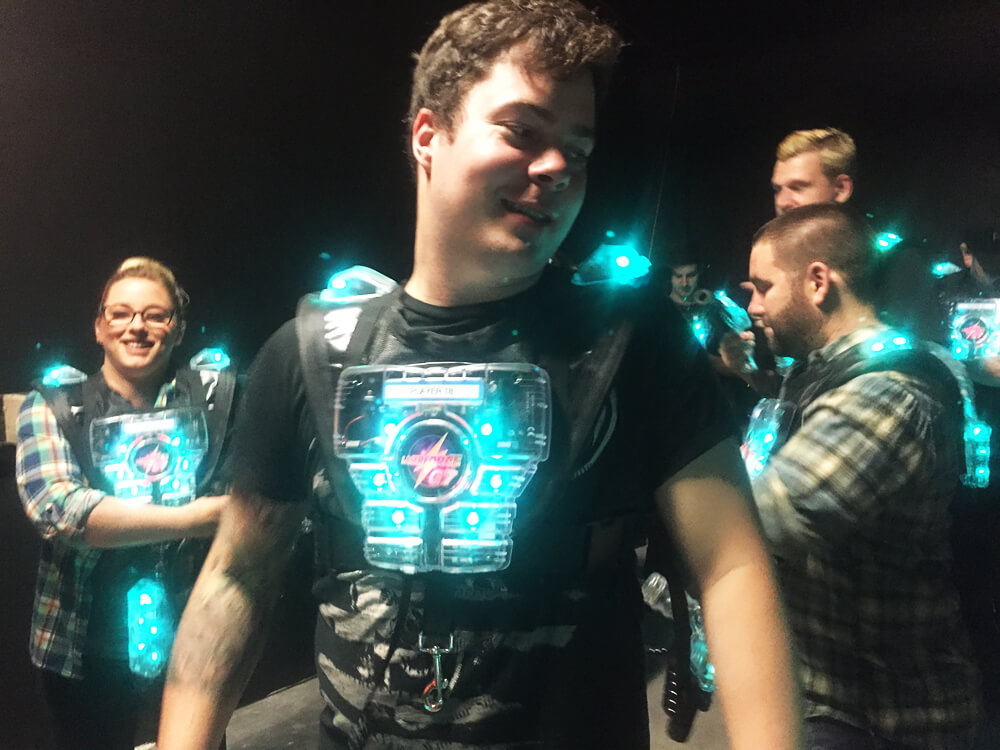 We went on a Friday night with 9 of our other friends. You can have up to 22 people at a time in Laser City’s indoor field (though I think that would be a bit crowded).

Games at Laser City run about 25 minutes long (15 minutes in the actual field, 10 minutes set-up/going over the rules), with regular admission costing $9 per person, per game. 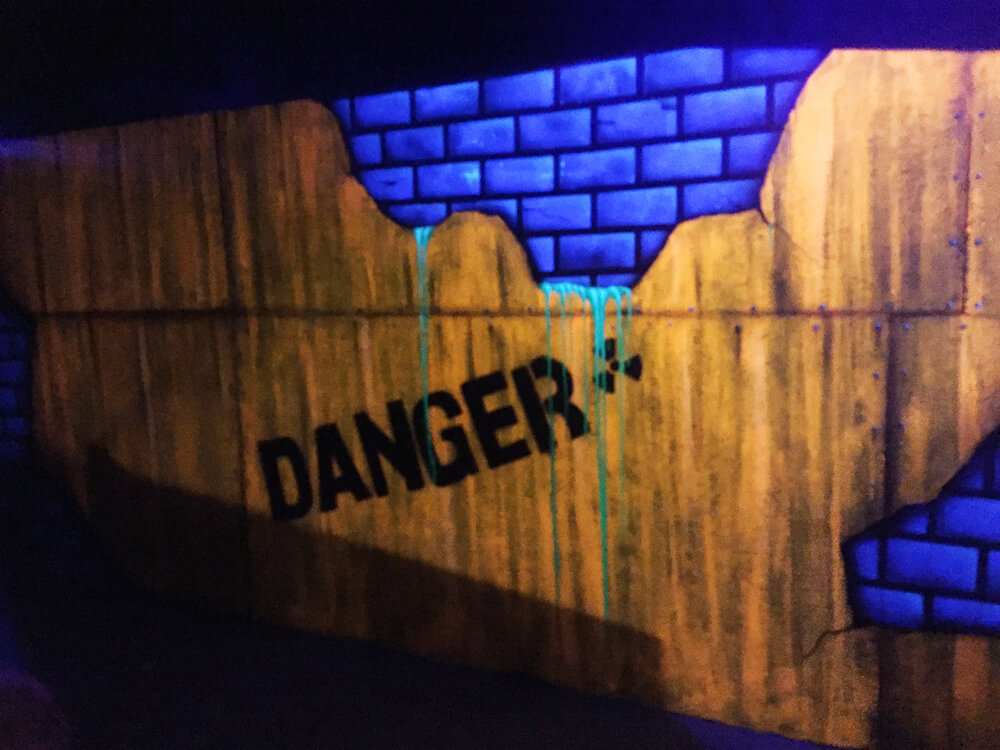 We did two games back-to-back. One split into teams (their technology will randomly split your group into teams so you don’t have to awkwardly divvy up), and one as a free-for-all.

Both were a ton of fun, and a great work-out! Our group really liked Laser City’s super responsive suit/phasers (saying guns are discouraged – violence and such). We’ve played at Laser Quest several times and have found their phasers/suit responsiveness to be slower than Laser City’s.

We also really liked how Laser City’s suits play its own music in your ear, along with the general music in the room. It takes the game intensity up a notch. The suit will also yell at you “fall back” or “take cover” if you’re being hit, which is cool too, like having a sergeant barking orders in your ear as you’re in the field.

Don’t let the photo fool you – Mike shot at me a LOT, lol.

We found the Laser City field at times (or in certain areas) a bit too exposed – if someone’s in a couple of key, higher level spots, they can see/spot/shoot at a lot of people so camping down in one of those spots can you give you an unfair advantage.

The founders tell us they are still adding some more obstructions in the field before officially opening so that should alleviate the exposure a bit. 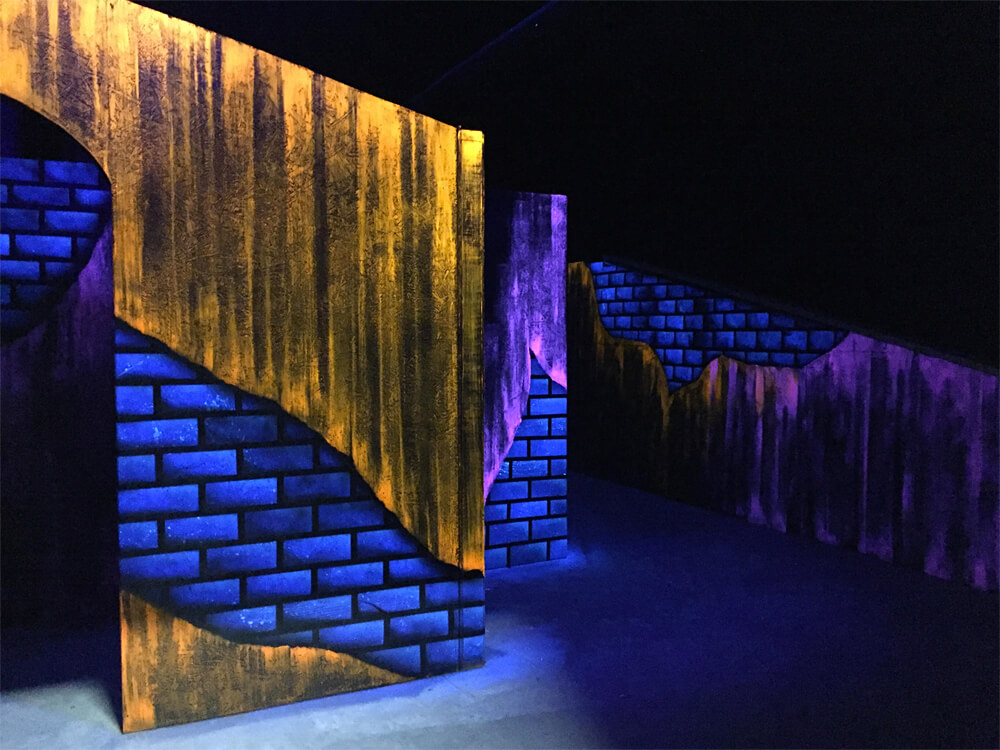 A few they told us about include a zombie one – a few people are infected and shooting others will get more people infected. There will also be a war zone one (including role playing, so you can be a medic who can’t shoot but can shoot to heal players), a space marines one, and a sort of ‘protect your base’ one, where you’re split into teams and there’s an added element of having to protect your base from getting shot at.

The one I’m especially interested in is the themed game that includes ‘laser bots’ that will shoot at players as well – adding another level of difficulty (intensity/excitement) to the games. 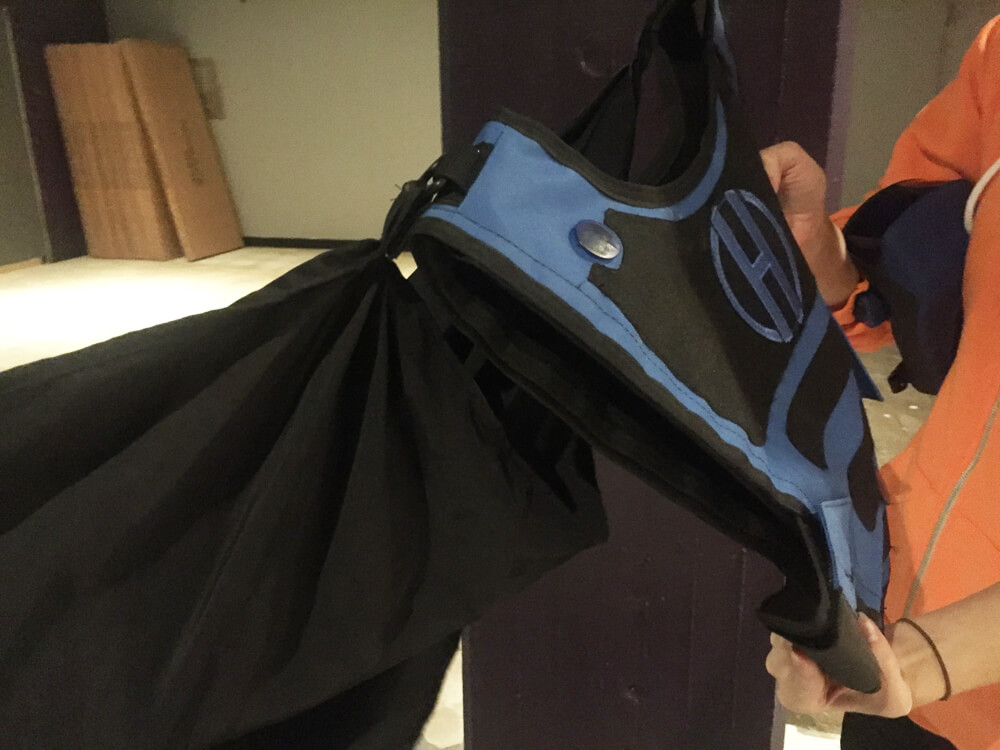 In about a month (sometime November), Laser City will also launch their ‘Hero Tag’ for kids as young as four! It will be on a kid-friendly field, and the suits will have superhero capes. Instead of phasers/guns, the kids will get these really cool laser fists that they can use to shoot at others (think Iron Man!)

Overall, we had a fantastic time at Laser City and I think it’s an awesome new addition to indoor entertainment options for Edmonton (especially as we start heading into the colder months). I think the lasers/suits at Laser City are definitely more sophisticated than what we’ve used in the past.

I also think the added music/’talking in your ear’ element of the suits helps set Laser City apart. Mike likes that Laser Quest felt like it had higher levels to move around but I thought Laser City’s terrain was pretty good (and a few of the ramps going up and down are pretty steep). 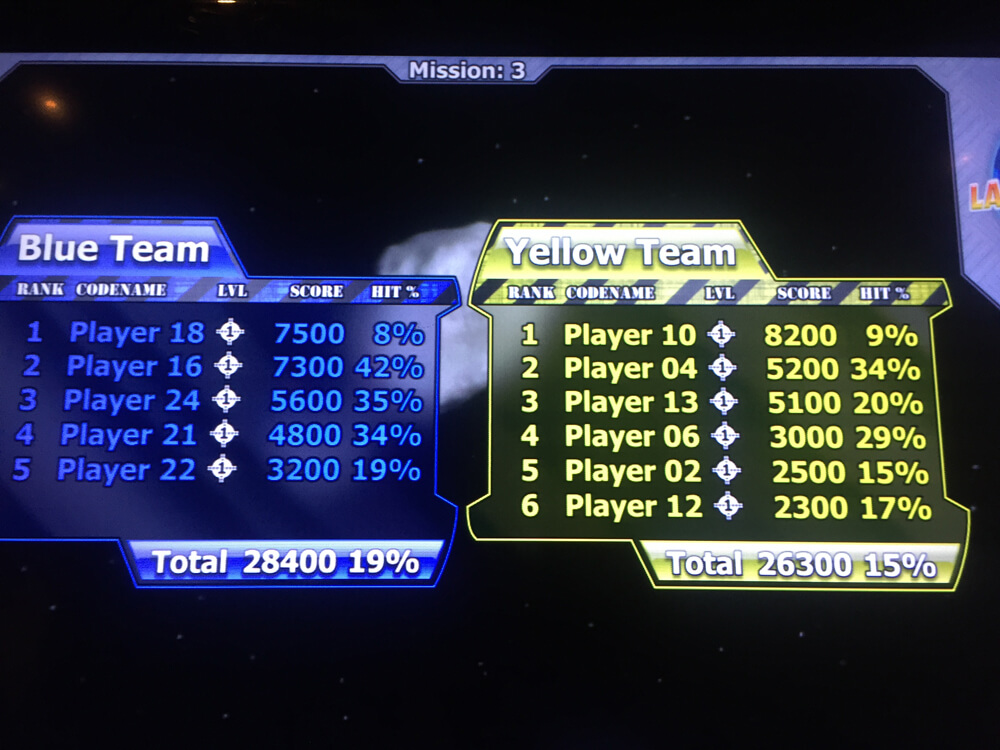 One thing we all agreed would’ve been nice is if the scores showed how many times a player had been hit (or how many hits a player made). Laser City’s score sheets show score and hit accuracy.

(First game I was the worst player on my team – yellow – but I think that’s because I was also trying to take some photo/video of the game for this blog post, lol).

The second game we did (free for all) I was 6th place for high score which I am pretty happy about, lol. 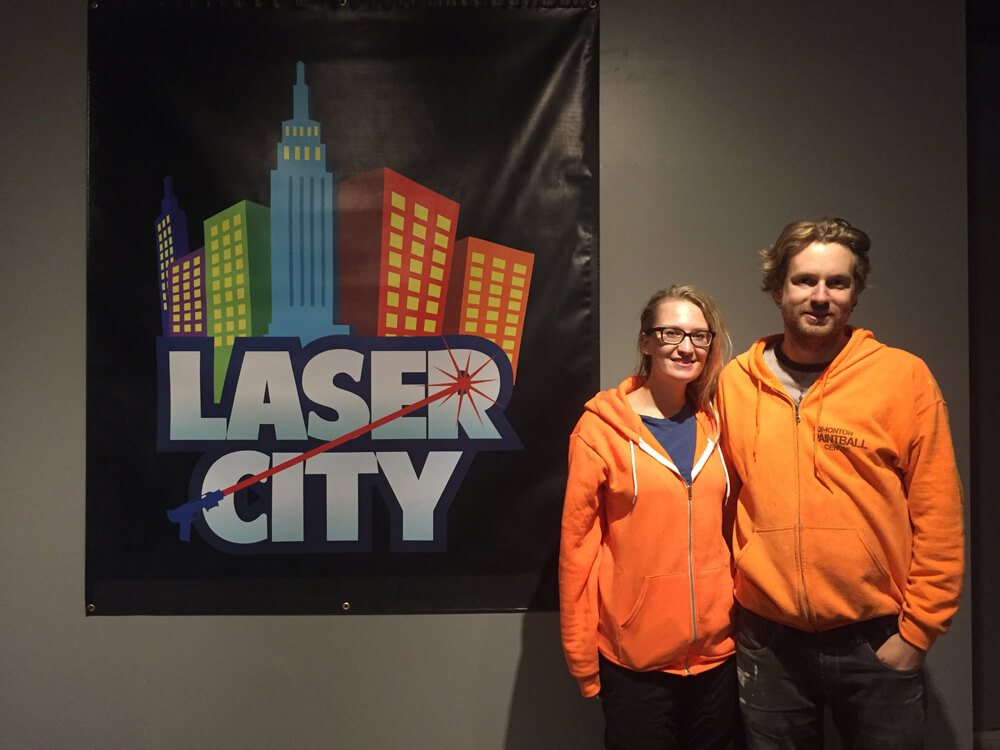 Thanks to Brittany and Rob and the whole Laser City team for a great night!

Congratulations to Brittany, Rob, and the Laser City/Edmonton Paintball Centre team for the launch of this great new facility! These entrepreneurs are in the business of having fun and creating experiences and memories for Edmontonians and we certainly got a great one, with lots of fun memories, after we played.

They expect to do a lot of parties (they’ve got six party rooms you can book) and I think their downtown location will be super convenient and draw in a lot of business.

Bonus: free parking in their lot. Which I always think is a very important factor when it comes to downtown businesses. 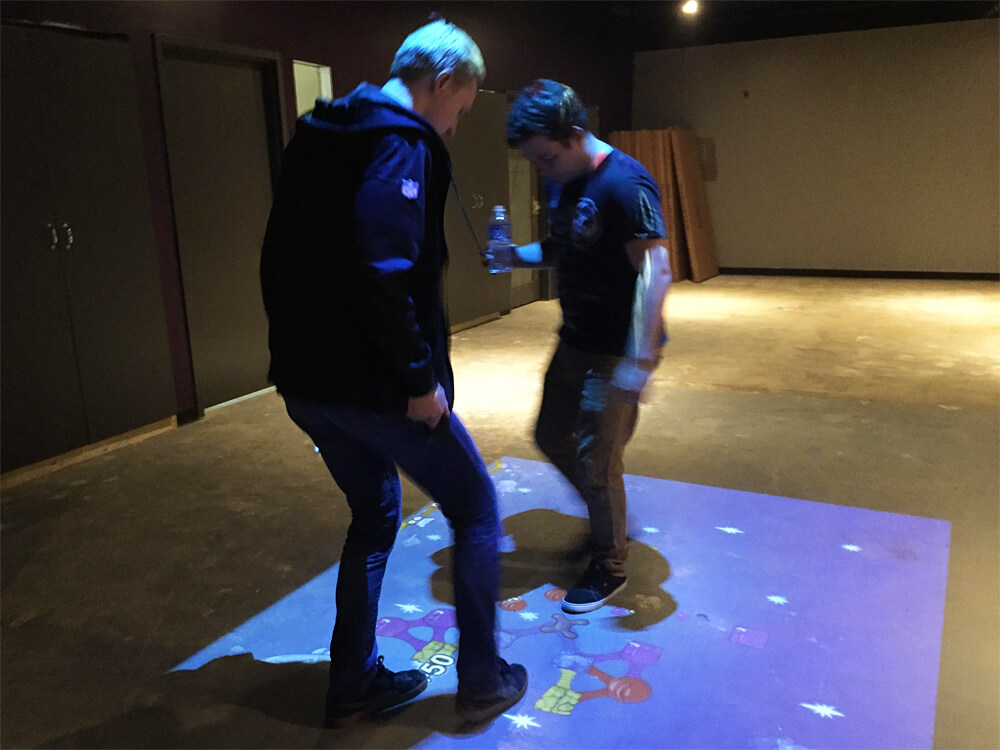 Laser City has neat games you can play on their floor while you wait for your laser tag game to start.

Brittany and the team have given me two free games for up to 6 people to give away to blog readers! I’m giving them away all in one (so there will be one winner selected) because I think in general, you should play two back-to-back games (so it’s a solid hour of fun). 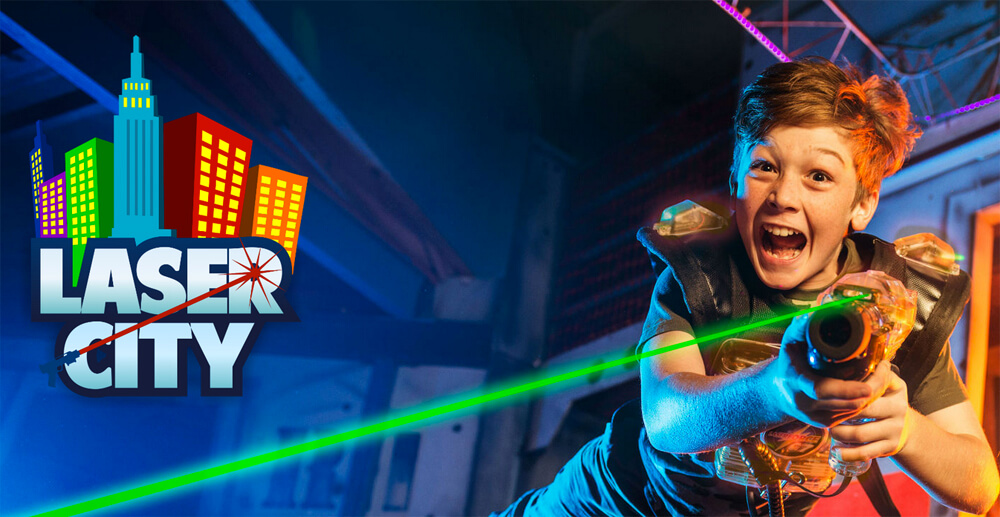 ENTER TO WIN A TWO FREE GAMES FOR UP TO 6 PEOPLE AT LASER CITY!

(valued at $108) Here are the different ways you can enter this contest (make sure you check off what you’ve done through the Rafflecopter widget below in order to qualify!)

I’ll randomly select a winner after the contest closes on Oct. 20!

* Note: Comments are moderated so if they don’t appear right away, don’t worry!

Thanks to Laser City for letting me come try this out with my friends and for arranging the giveaway!

Disclaimer: I will always provide my 100% honest opinion on this blog. I was invited to try Laser City as a guest. This has no impact on opinions stated in this post.

Linda Hoang is a Canadian blogger based in Edmonton, Alberta, who writes about travel, food, lifestyle and pet topics. She's also a seasoned social media/digital strategist with a journalism background, the founder of the Edmonton International Cat Festival and co-founder of Stop Race Based Hate, an online anti-racism education tool. Linda loves exploring the world with her partner Mike, eating their way through cities, supporting local businesses, and photographing Instagrammable Walls. Linda is a fur-mom to two cats and two dogs.
PrevPreviousRecap + Giveaway: SmartyPantz Edmonton – Live Action Escape Game
NextSocial Media Notes (#87) – Links for the Week of October 5 – 11Next