BaconFestYEG is back for its second year!

The baconiest (that’s a real verb) event in Edmonton takes place June 30, 2015 at the Jubilee Auditorium Lobby and grounds and features gourmet, one-of-a-kind bacon dishes from 10 Edmonton restaurants, bacon-themed drink specials, music, comedy, prizes, a lovable dude dressed in a bacon suit, and more! I’m giving away a pair of tickets to the event (scroll down) but first –

One of the participating restaurants, Pampa Brazilian Steakhouse, is doing a bacon special throughout the month of June! 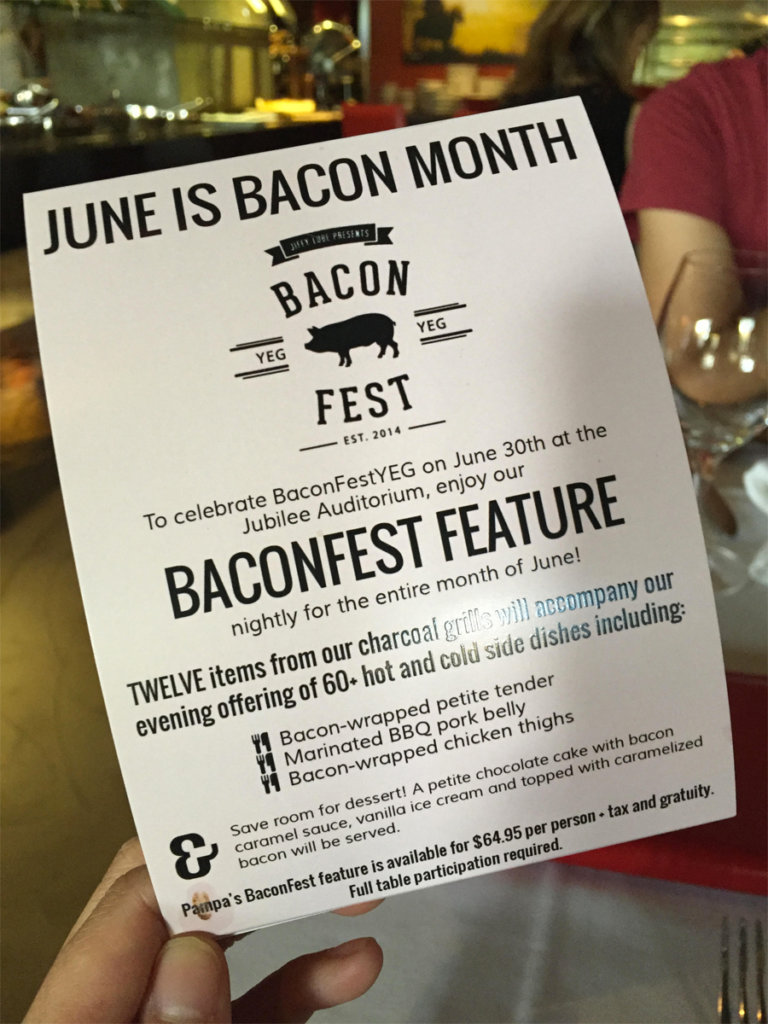 It’s a great value if you’re already headed to Pampa for dinner (which would be $49.95 a person), for not much more, you’re adding all that extra bacon plus a really good bacon dessert (where dessert would be a separate, additional cost if you were just dining from the regular all you can eat menu).

I was invited by Gastropost Edmonton go try Pampa’s bacon specials last week and was pretty excited to go! It had been a few years since I’d been to Pampa. At the $50 per person price point normally, it’s pretty steep and becomes somewhere most people would probably go for occasions and not every day (though I know a lot of people do just go to it as an every day occurrence, which, let’s face it if I had the money I wouldn’t turn down all you can eat meat most nights, lol). 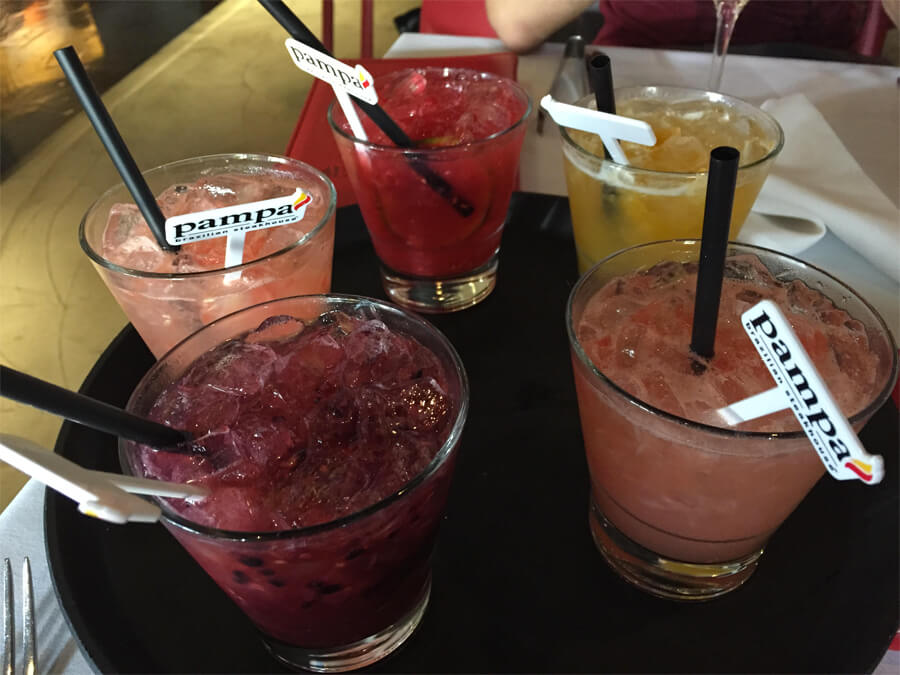 Pampa’s got all of these refreshing, summer drink specials on right now – so if you go for Pork / BaconFestYEG Month, you need to try the cocktails! The raspberry one (I’m a bad blogger as I did not write down what the exact drink concoction was, but it’s the middle back drink in the above photo) was so fruity and delicious. 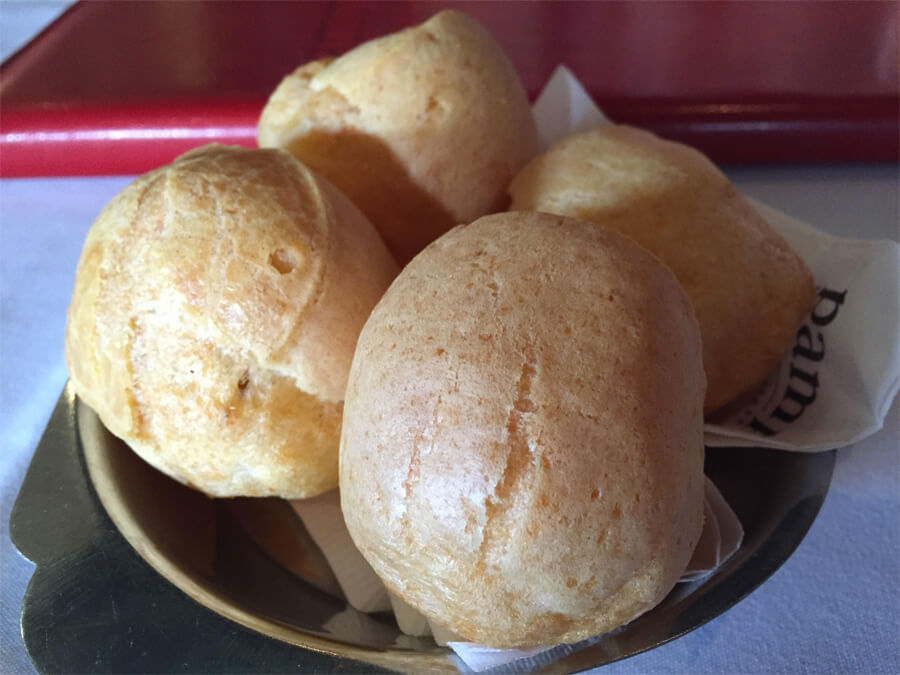 The Brazilian cheese buns Pao de Queijo (which are gluten free) are so good. It’s such a simple dish like a cheese puff without the cream, and is addictive. I had 4 as soon as they set the plate down (which probably isn’t the best move as it will likely hinder your ability to stuff the most meat into your stomach, but… so good… so worth it). 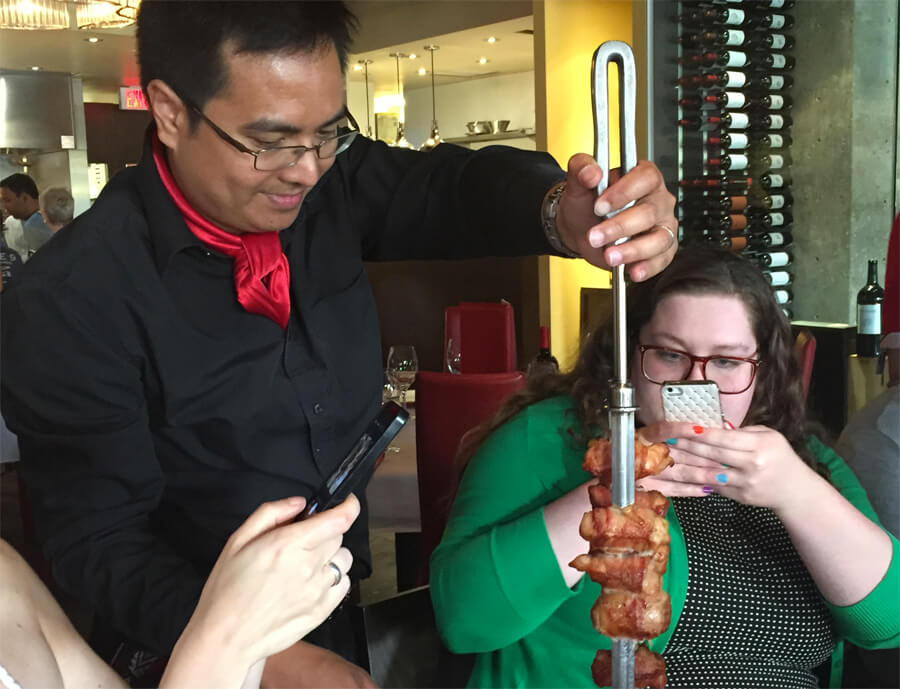 Can everything in life be bacon-wrapped?

Our group – expectedly – took lots of photos of all da bacon. 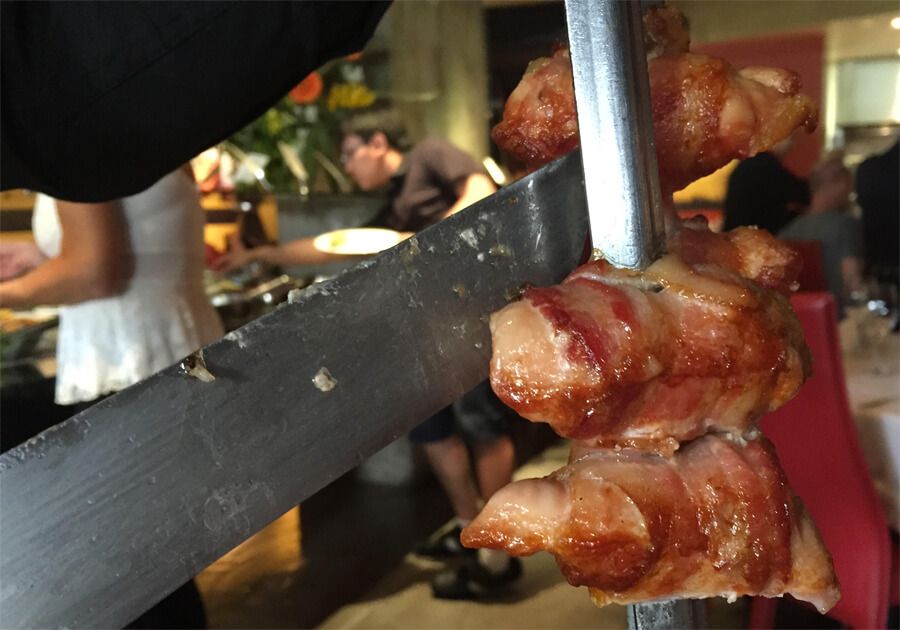 Close up of the bacon-wrapped chicken thigh, omnomnom. 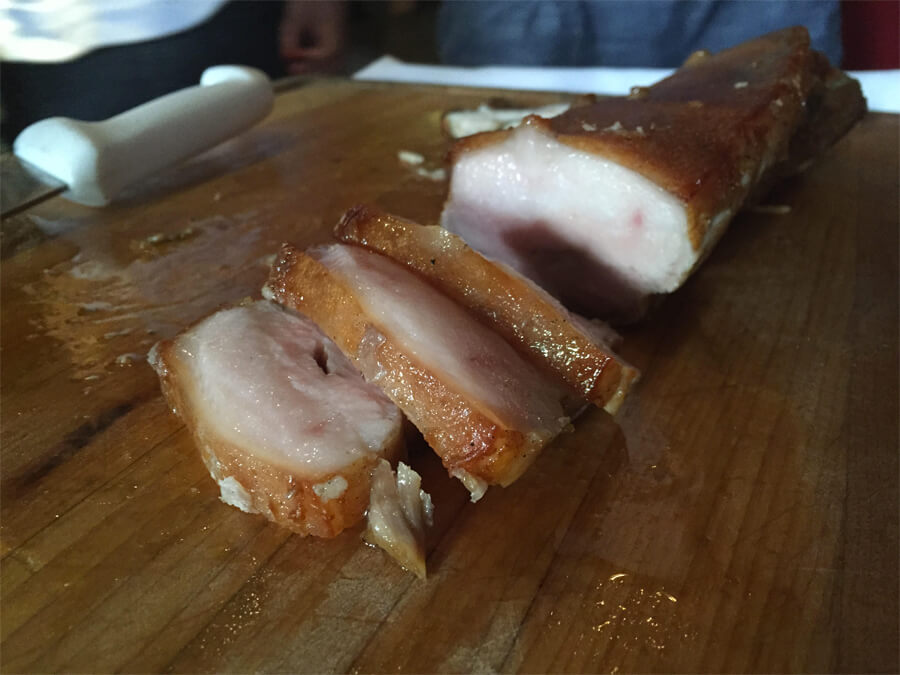 The pork belly – like all the meats – gets cut right at your table. Super fatty (as it should be) and delicious. My favourite meat cuts were the garlic rump steak, rib eye, bacon-wrapped chicken and petite tenders, and – (and this surprised me because I’m not a dessert girl) – the chocolate cake with bacon caramel sauce, vanilla ice cream, and caramelized bacon, bacon dessert! Savoury and sweet bacon combinations can be so hit or miss but Pampa has got this dessert down. 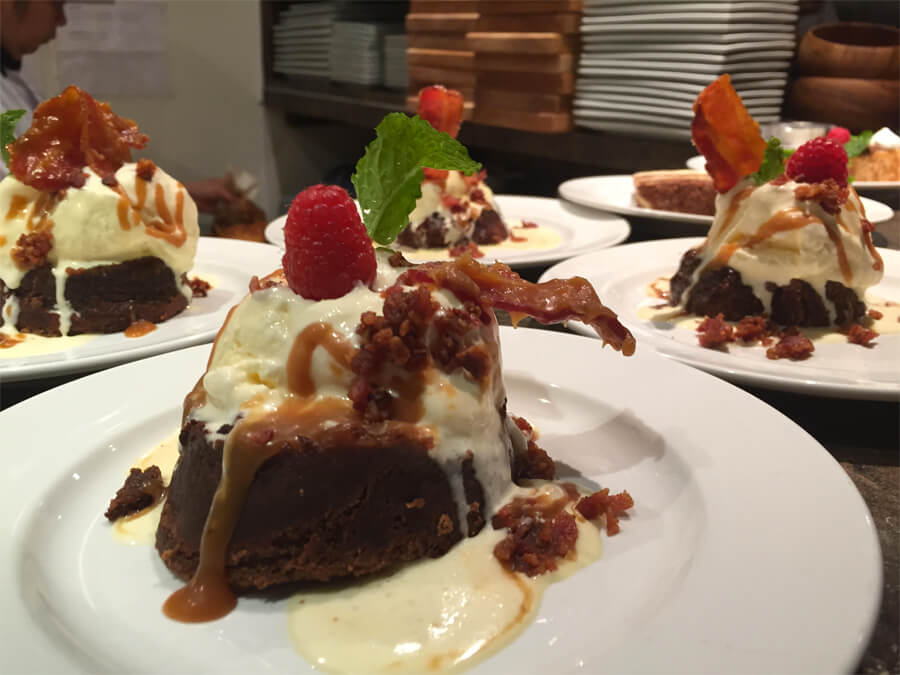 My favourite part of the night – aside from all da meat/bacon, and the great service – was when Pampa manager Oscar Lopez came to our table to talk about the history of the Brazilian churrascaria – how cowboys used to skewer and slow cook their meat over fire, using knives to cut off thin slices as they cooked. Oscar also gave a shout-out to my personal favourite Brazilian churrascaria – Fogo de Chao – as a steakhouse Pampa (and probably all other Brazilian steakhouses) aspire to be. I loved his passion! He also told us since launching the BaconFest Feature, it’s actually been quite well-received. It can be a hard sell because everyone at the table needs to agree to it, but again, the value (since you’re already there and paying $50 for all you can eat) – is definitely there to toss in another $15 for 3 more bacon dishes + dessert. Just go for it! 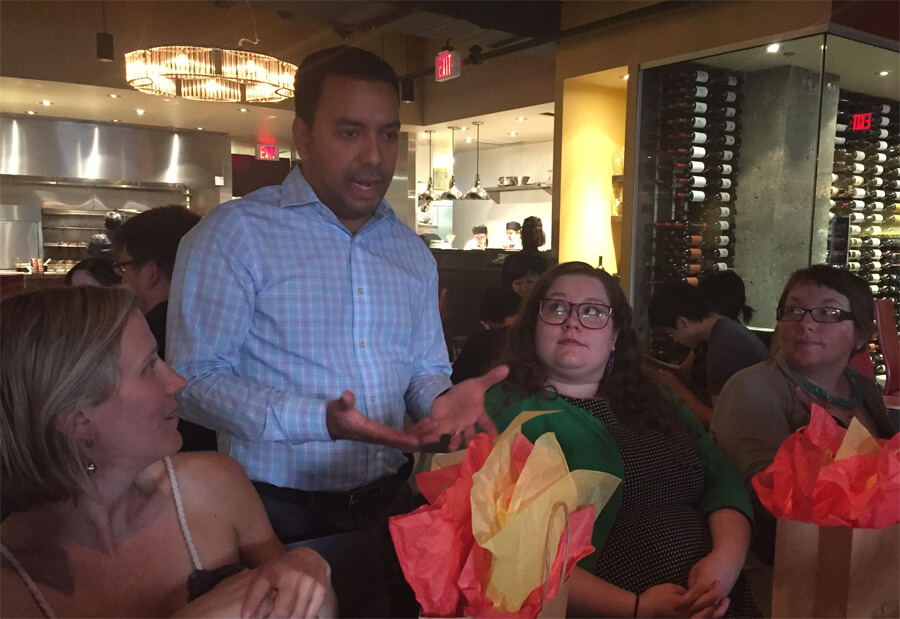 I can’t thank Oscar and the Pampa staff enough for the wonderful hospitality. Our server Matthew was excellent! and also super talented at pouring liquor into small shot glasses from high distances: 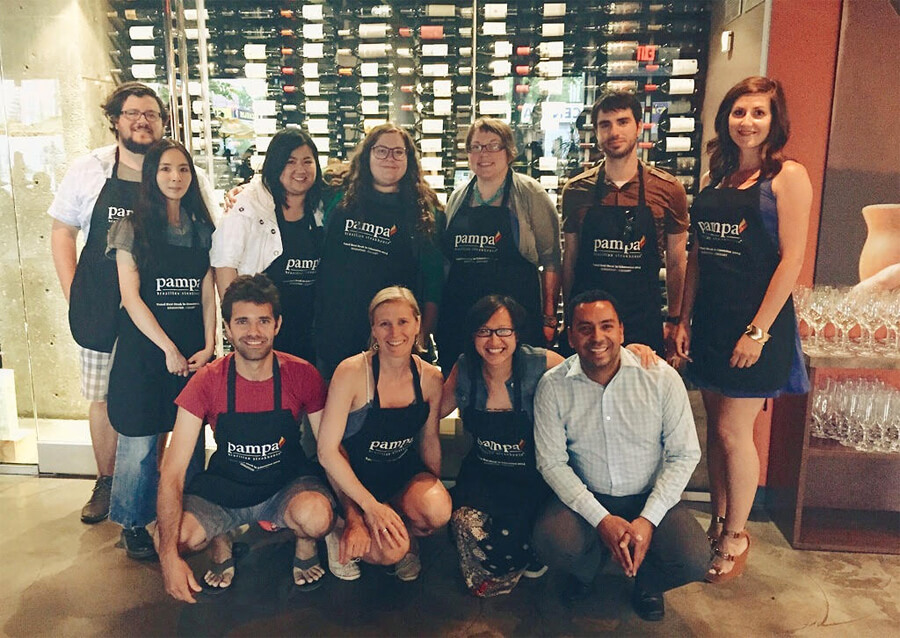 Our group had a great time trying the BaconFestYEG Feature at Pampa Brazilian Steakhouse!

There is so much pork and bacon goodness in Edmonton in June (I’ll be writing another post on Passion for Pork’s Pork Month restaurant specials later this week!) and I sincerely hope you go out and try them! Obviously Pampa is a higher price point for a meal out, but it’s one of those experiences that are always a good time. (Sometimes you feel defeated though because there’s just so much food and you can’t possibly eat everything no matter how much you want to. Also, the #meatsweats).

I hope you also take in BaconFestYEG on June 30. It should be a lot of fun! Obviously if you get free tickets in it’ll be even funner ;) Enter the giveaway below (and check out the bacon special Pampa will be serving up at BaconFest! It’s a slow-roasted (obviously) smoked belly of pork, bacon praline, with apple and fennel slaw and a bacon yogurt sauce. Keep checking the BaconFestYEG website to see the other unique bacon dishes that will be featured at the fest! 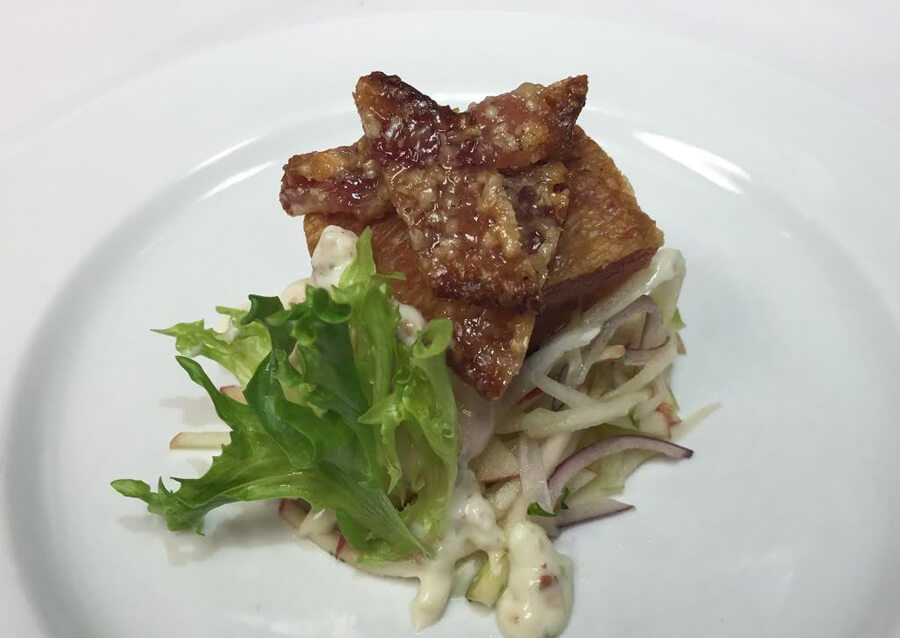 Please note comments are moderated so don’t worry if your comment doesn’t appear right away!

This giveaway closes on Wednesday, June 24, 2015 at 10 p.m. I will randomly choose a winner based on the entries after the contest closes.

Good luck, spread the word, and if you’re not sure about your chances: just go buy BaconFestYEG tickets here!

Congratulations to Lily V. – the winner of the pair of tickets to BaconFest! Thanks to everyone who entered!!

Linda Hoang is a Canadian blogger based in Edmonton, Alberta, who writes about travel, food, lifestyle and pet topics. She's also a seasoned social media/digital strategist with a journalism background, the founder of the Edmonton International Cat Festival and co-founder of Stop Race Based Hate, an online anti-racism education tool. Linda loves exploring the world with her partner Mike, eating their way through cities, supporting local businesses, and photographing Instagrammable Walls. Linda is a fur-mom to two cats and two dogs.
PrevPreviousGiveaway: Eat Your Way Through the 2015 FIFA Women’s World Cup!
NextRecap + Giveaway: Try June Pork Month Food Specials & Enter to Win Tickets to Porkapalooza Ribfest!Next