My birthday recently came and went (sad faces that it’s over now :() and I got to do so many different festivities! I believe it’s very important to celebrate your birth – really, to celebrate all life milestones. In the last few years I’ve gotten into the habit of celebrating a birthday week – filling the week with various activities! This year for my birthday week (#lindorkfest) we had dinner with friends at one of my favourite restaurants XIX Nineteen. I went to Taste of Edmonton with my mom, My family took us out for a 10-course Chinese dinner at CHA for Tea Palace. My office went for a birthday lunch with me at Cafe Amore. We had a great night out at Red Piano, Japanese all-you-can-eat brunch at Sumo Sumo, rode some rides and ate my favourite midway treat at K-Days, and as a gift, Mike booked us a ‘Cut Like a Chef’ knife skills class at Knifewear Edmonton! 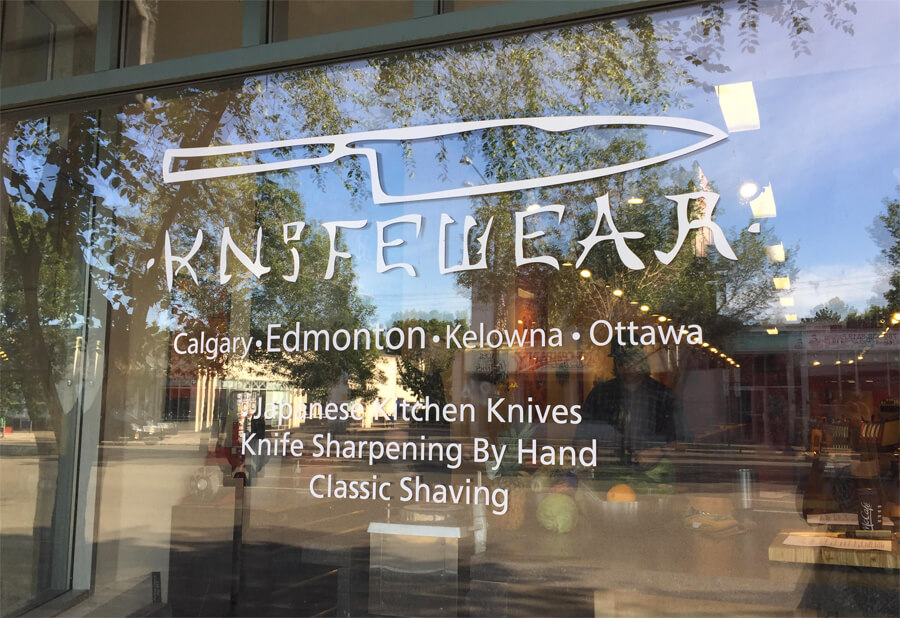 Knifewear had been popping up at a few different food events around town and I recently did an interview with shop manager Kris Armitage for a NAIT techlife magazine story on knives! That’s when I heard about the classes they offer! I have (had) no knife skills and thought the class was being offered at such a good rate (2 people for $60) that I was really excited to learn with Mike.

The class was led by Chris and Owen. It was done before the shop opened, and we were a small group – Mike and me, and our friends Lesley and Steve who we had encouraged to take the course with us. Had they not, it would’ve just been Mike and me, which also would’ve been fantastic value – basically a one-on-one knife skills course for 2 people for $60! Even with the 4 of us, it felt like such a intimate, private class. 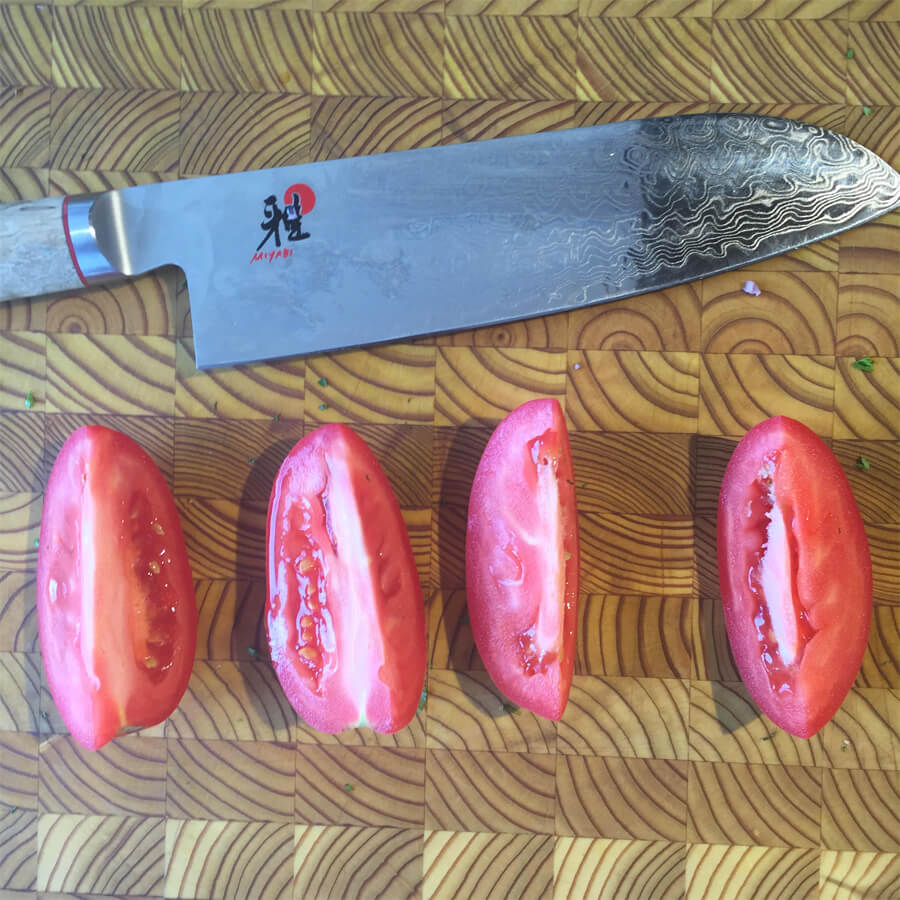 Slicing tomatoes like a pro at Knifewear’s knife skills class!

We learned a few different knife cutting techniques, like forming a ‘claw’ with the hand you’re using to hold the ingredients you’re cutting so that the knuckle of your middle finger butts up to the knife and the knife never moves past that middle finger (watch the placement of your thumb and pinkie fingers!) We learned that your index finger and your thumb are really the only two fingers that hold the knife, and should hold it up on the actual blade, with your middle finger kind of hooked into the end of the knife. In fact you’re not supposed to cut the knife holding the handle because you have the least control that way. We also learned to use a slicing/sliding motion for cutting as opposed to hard chops – as demonstrated in this video!

Even when you do chop, it doesn’t ever need to make any noise – the Japanese knives are so sharp there’s no need to harshly chop. (Remember a sharp knife IS a safe knife!) The best kind of cutting board is wooden – apparently bamboo ones are the worst for your knife. We also learned to never use our knife to scrape what we’ve just cut across the cutting board – that’s really bad for the knife and I think something so many people do! 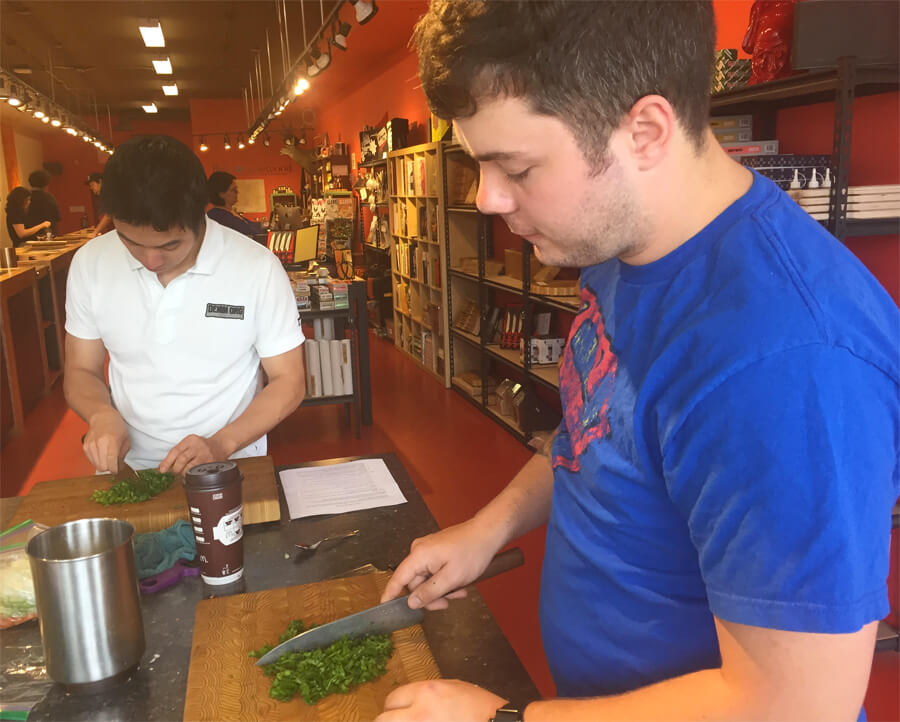 Mike and Steve working on the parsley at Knifewear Edmonton.

We were using ‘Nakiri’ knives and ‘Santoku’ knives. Nakiri is a vegetable knife with a long, flat blade. A Santoku is a hybrid between a Nakiri and a Gyuto knife (‘cow sword’). The Santokus are good for slicing, dicing and mincing – which are called “the three virtues.” Santokus are generally used for working with vegetables too. I switched knives halfway through because I found the first one I picked was just a bit too heavy. Mike almost nicked his finger with his knife but it didn’t actually get into his skin. Chris and Owen didn’t look too phased though, I feel like students have probably cut themselves in previous classes. They said our class was doing great! 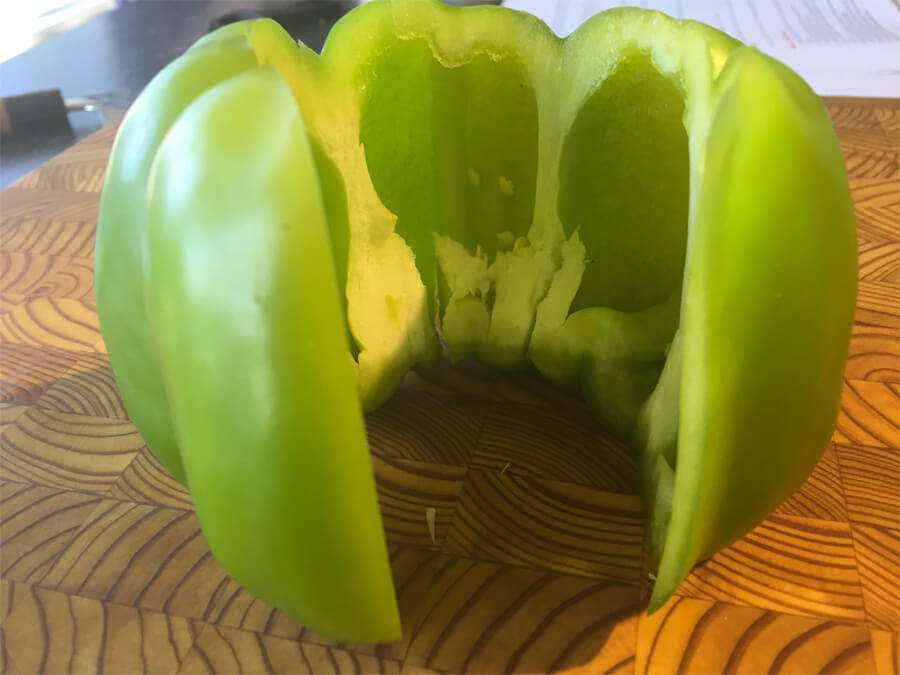 Slicing out the core of a peppers can be a fancy knife trick for party guests!

We cut carrots, onions, and celery – what we learned is a “Mire poix” – a very common combination of veggies that are typically the base to a lot of stocks, sauces, and soups! We also learned how to cut green peppers in a really cool way (Chris said next time we have a dinner party call our guests in to watch us cut the pepper and it’ll be guaranteed to impress them lol). We also learned how to properly cut broccoli, parsley, shallots, and shave/cut ginger. 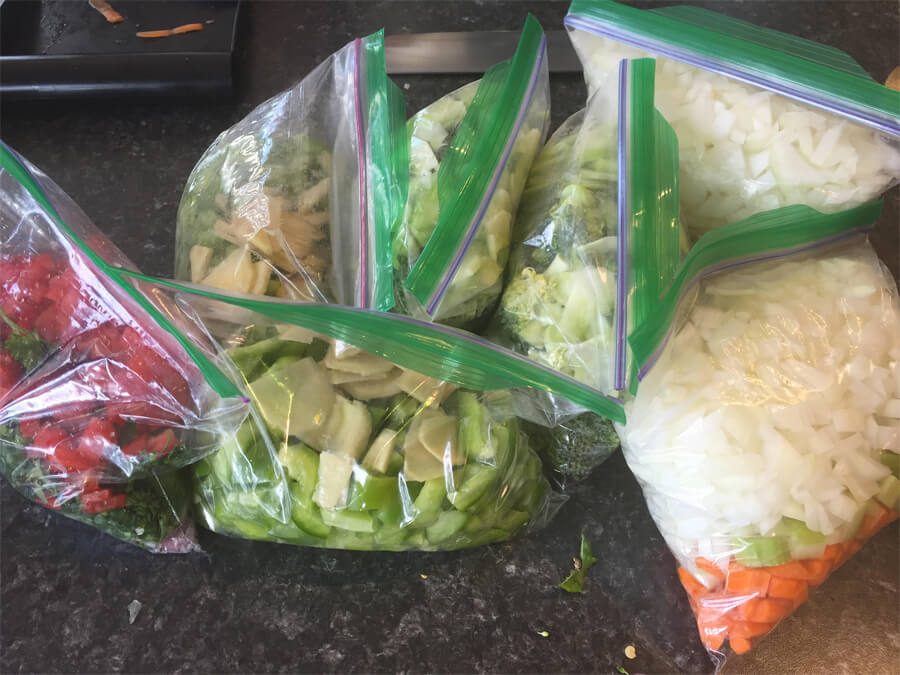 We get to take home everything we cut!

The class went much longer than any of us expected. It started at 9 a.m. and we didn’t leave until closer to noon! For $30 a person, in a very private, one-on-one type of environment, for that length of time, I really felt like we got so much value out of this class. We also got to take home all of the items we cut! And as we went along, as Chris demonstrated what to do, Owen would come around and finesse or help us adjust our knife placements and slices. Both of them had great personalities and were really funny – injecting a lot of puns into the class (if you’re not into puns, you may not like this class – but then, if you don’t like puns, you need to ask yourself – who are you? lol)

I am so glad Mike booked this class for us. It just so happened that later that day, we ended up cooking a meal for the Ronald McDonald House and a bunch of what we had to cut was almost identical to what we cut during the Knifewear class so Mike was feeling like a pro. :)

Both us left the knife skills course feeling much more confident about our knife skills and excited about cooking. The more comfortable and confident you feel with the knife, the easier it is to work in the kitchen. Solid knife work can also affect the quality and taste of the food you create.

Thank you to Chris and Owen from Knifewear for the fantastic Knife Skills class. I absolutely recommend it to anyone interested in upping their knife skills (even just learning about knife skills, period). After the class, you get 10% off to purchase a Japanese knives, but given all of the #lindorkfest festivities, our money was a bit drained. I do hope to come back to Knifewear soon and invest in a quality knife. Costs range from about $100 up to even $2,000 (luxury knives). When I interviewed Kris he said purchasing one in the $150 range would get you a great knife that will last you for quite some time before you need to sharpen it. My article with Kris doesn’t come out in the magazine until this fall but I’ll be sure to post the link here when it is up!

Be sure to check out Knifewear for their knives, sharpening your existing knives, and sign up for a class!

I can’t wait to sign up for more cooking / kitchen skills classes!

Linda Hoang is a Canadian blogger based in Edmonton, Alberta, who writes about travel, food, lifestyle and pet topics. She's also a seasoned social media/digital strategist with a journalism background, the founder of the Edmonton International Cat Festival and co-founder of Stop Race Based Hate, an online anti-racism education tool. Linda loves exploring the world with her partner Mike, eating their way through cities, supporting local businesses, and photographing Instagrammable Walls. Linda is a fur-mom to two cats and two dogs.
PrevPreviousEdmonton Tourism – You Think You Know Edmonton? (Food Trucks!)
NextSocial Media Notes (#78) – Links for the Week of July 27 – August 2Next