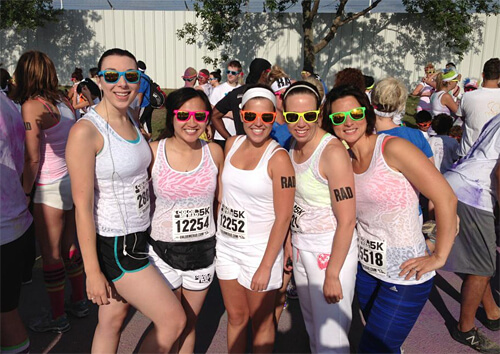 Team CTV! The ‘before’ shot

On Sunday morning I participated in my first-ever run: Color Me Rad 5k! I signed up for this run a few months ago when I was still working at CTV. One of my co-workers Kelsey sent out an email asking if anyone wanted to form a team. I already knew what the run was about because a few days leading up to the e-mail I had noticed a bunch of my Facebook friends and tweeps posting about this colourful event online. So I immediately signed up on looks alone – Color Me Rad just looked like it would be an amazing time! I then encouraged my friend & then-co-worker Breanna to sign up too!

After the initial sign up we kept trying to schedule gym dates to run on the treadmill and prepare for the 5k but I pretty much bailed every time and/or delayed the dates to the point where they just didn’t happen and Breanna went on her own. I’m awful when it comes to committing to fitness. Seriously, just the worst. 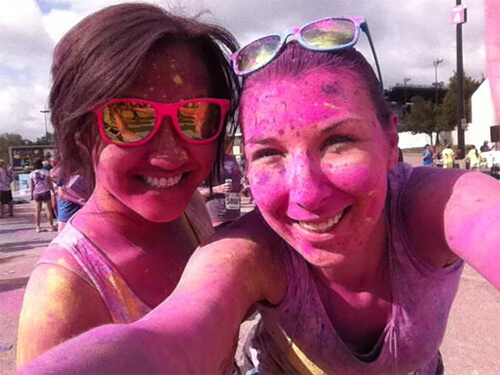 Many failed gym dates to prep for Color Me Rad but in the end we crushed it anyway!

As July came around and the race loomed ever closer, I was 99% sure I wasn’t going to go because of how unprepared I felt. I had maybe gone for two runs around the block and perhaps one walk, in the months leading up to Color Me Rad. But I was encouraged by everyone not to bail – and that walking would be fine. In fact the Color Me Rad FAQ also lists walking as an acceptable option for the “race.” So that definitely helped ease my worries. Also when I got my race packet with the cool T-Shirt, bright coloured sunglasses and I bought additional rad shorts, I just started getting very excited to participate!

Our team consisted of Kelsey, her boyfriend, Michelle, Marni, Breanna and myself! Everyone except me and Breanna had done runs before. I told everyone they could feel free to leave me behind because I didn’t want to hold them back but they insisted they would stick with my pace – which in the end I was so appreciative of.

The route started at Northlands and went down south to the Ada Boulevard/river valley area, then back up again to Northlands. It was a gorgeous day for a run and I pushed myself harder than I would have had I just been going solo, because I didn’t want to hold the group back. Don’t get me wrong, we definitely had walking breaks – but still managed to finish the 5k in about 40 minutes!! This is amazing to me. And totally makes me want to do more runs and keep pushing myself! 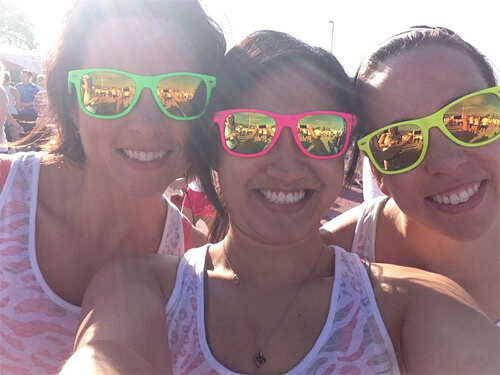 Michelle and Marni were especially encouraging. They provided a lot of tips that kept me going, including the big one: lie to yourself (and others). The biggest example of that was telling me there were water bottles at the next checkpoint. That kept me going all the way to the next checkpoint but there were no water bottles there. Lol. Another pro tip included making sure you set walking goals such as ‘We’ll walk at the next (fill in the blank)’ (corner, set of lights, etc.) You should also walk right before the big push to the finish line so you look most impressive running through the finish line (making it seem like you had run the whole time to that point). When going up hills, run in short distances. Long strides will tire you out quickly. Also if there are people in front of your path walking, then just start walking too. They are a natural barrier that you shouldn’t try to pass. Lol. Those were just some of the gems from Michelle & Marni. 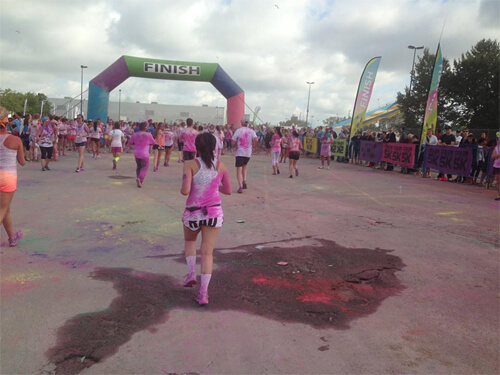 Almost at the finish line!

The event itself was so fun. There were SOOO many people. I would be interested in knowing just how many participants there were because there were heats starting pretty much in half hour intervals and the last heat was around 4, 5 in the afternoon! Plus there were two full days so I really feel like thousands took part in this race! But you can understand the appeal – start white, then throughout the course get colour bombed so by the end you’re a rainbow of colour? Too fun! 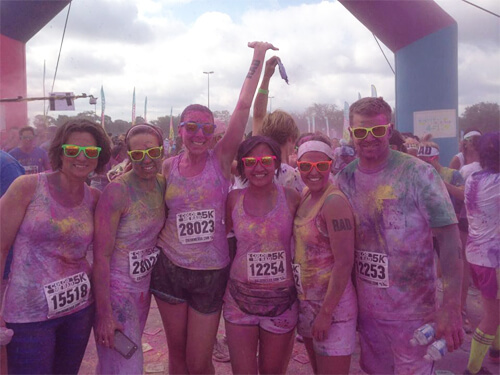 Team CTV! The ‘after’ shot!

Some of the proceeds of the event go to support The Stollery Children’s Hospital but it’s unclear how much (it is a for-profit run). But it also gives you the option of donating money directly to the cause which is nice. Raising money can be a lot of pressure and I also hate when there are fundraising minimums for such events. I think it should be what people can afford and what people can raise and organizations should just be appreciative of any donations. They did mention The Stollery a lot throughout the morning as well. So I did leave feeling quite good about the cause, my fitness and the race itself. 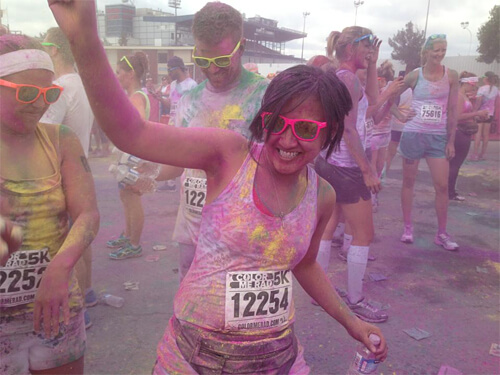 Color Me Rad was all about getting colour-bombed!

Overall, I had such a blast at Color Me Rad. The atmosphere was terrific, my team was awesome, the pictures were so rad – and most importantly I performed way better than expected, especially for not preparing for it really at all, and it really inspired me to do more to be active and fit.

Although like I said I am a total failure when it comes to fitness and commitment so we’ll see how long the inspiration lasts. If anything, I get nice memories and awesome pictures out of it ;) 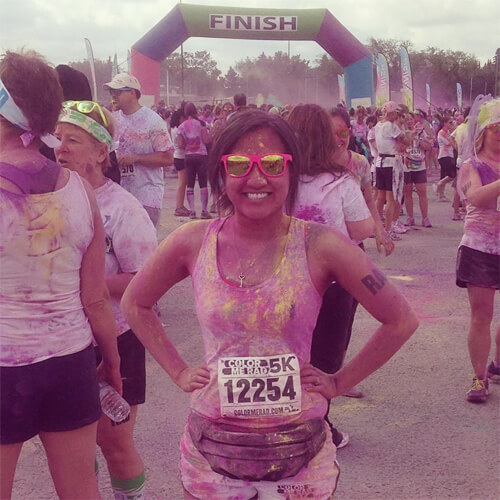 Side note: It’s been killing me every time I’ve had to spell colour as “color” for the sake of the proper race name. It just feels so wrong. Canadian grammar problems.

Linda Hoang is a Canadian blogger based in Edmonton, Alberta, who writes about travel, food lifestyle and pet topics. She's also a seasoned social media/digital strategist with a journalism background. Linda loves exploring the world with her husband Mike, eating their way through cities, supporting local businesses, and photographing Instagrammable Walls. She is the founder of the Edmonton International Cat Festival and a fur-mom to two cats and two dogs.
PrevPreviousSocial Media Column: Projects take off with crowdsourcing, crowdfunding
NextSocial Media Column: Follow the animals of the Edmonton Humane Society on social mediaNext