I haven’t made any New Years Resolutions to be more active or fit in 2016 but thanks to the Edmonton Humane Society I’m well on my way to that anyway!

To kick off the new year, I woke up bright and early on Caturday (Saturday, Cat Saturday) last weekend to do hatha yoga in the presence of adorable cats!

It was all part of the Edmonton Humane Society’s newly-launched #CatsOnYourMats Cat Yoga classes! 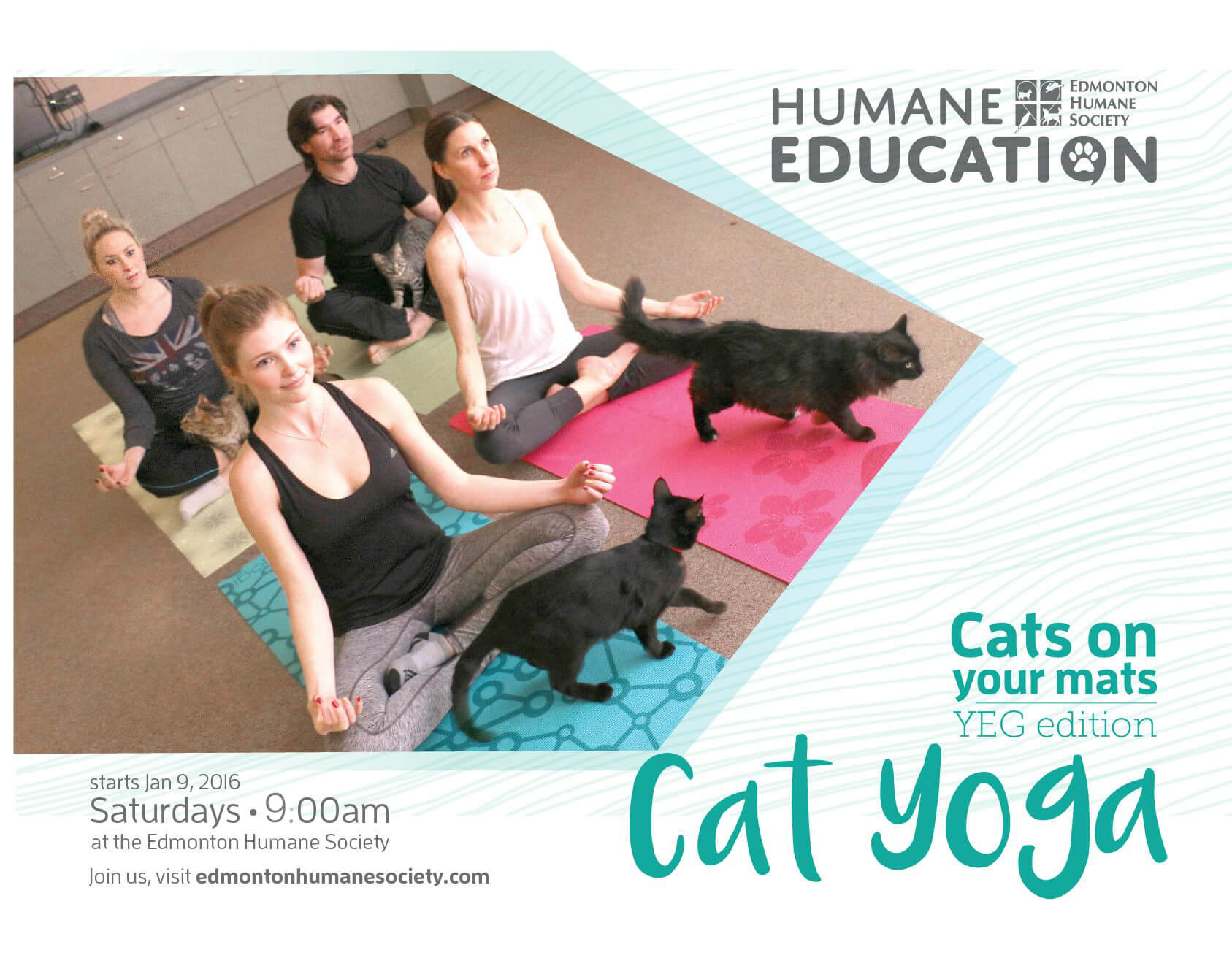 Yoga instructor Charlene Bergenstrom with a cat at Cats On Your Mats.Cats on Your Mats is almost exactly what it sounds like:

It’s a yoga class done while surrounded by cats who will occasionally come visit your mat.

(You bring the mat. They supply the cats!)

Here’s how the Edmonton Humane Society describes it:

What do cats and yogis have in common? They both love to stretch! And now they can stretch together: Introducing Edmonton’s first Cat Yoga Class. This new phenomenon of gathering friends and felines together for yoga was inspired by the Stretch Vancouver studio where eight kitties pawed and purred their way around the studio while participants did their poses and stances back on September, 20th 2015.

This course is not only healthy and fun, it also helps to socialize and enrich the lives of the shelter cats, as well as encourages adoption by showing off the cats awesome personalities by interacting with them. 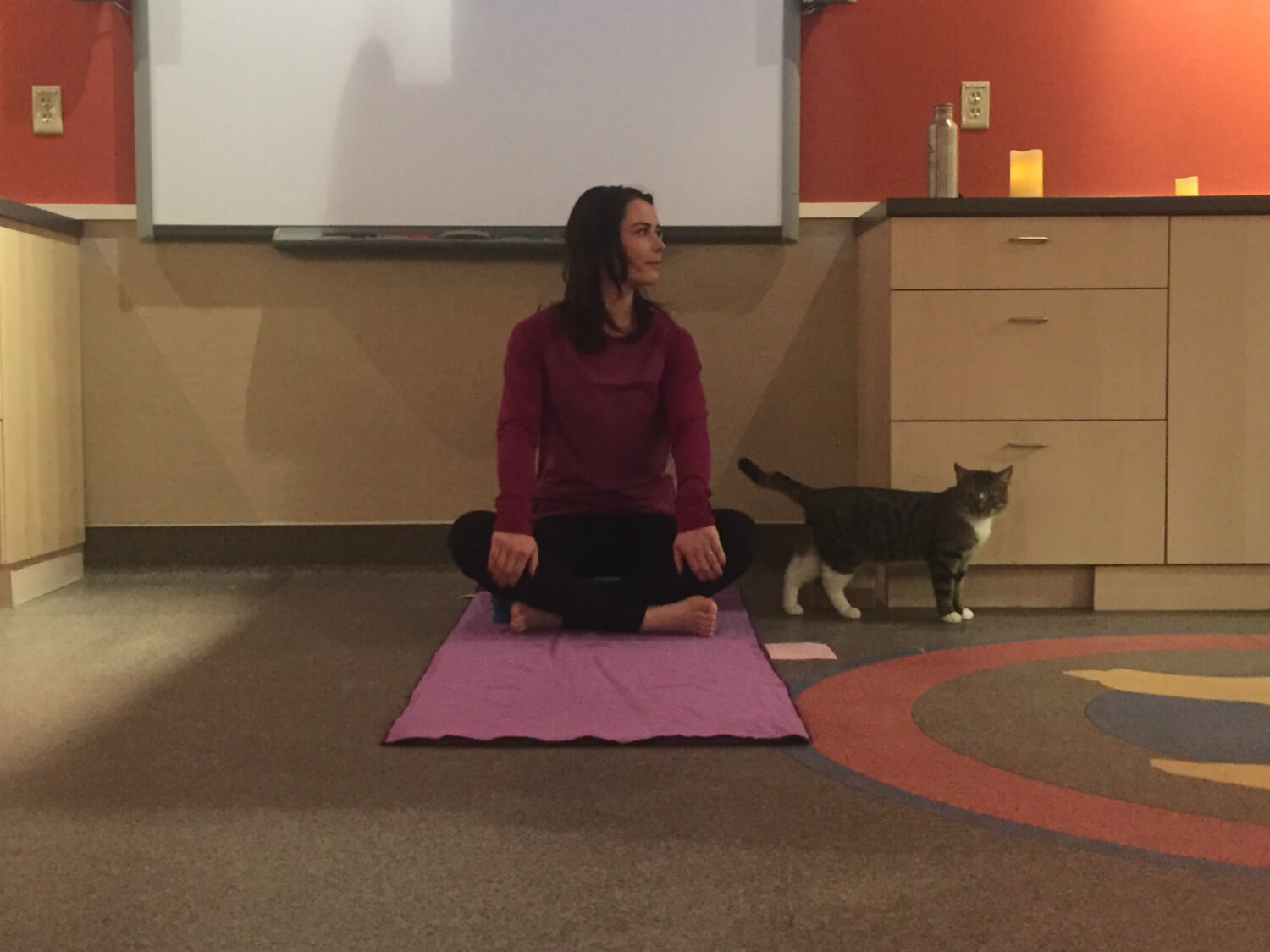 Yoga instructor Charlene Bergenstrom with a cat at Cats On Your Mats.

The yoga aspect of the class isn’t an intense yoga class by any means. I haven’t actually taken a yoga class in years (figures it took cats to draw me back into it) but despite being ‘out of it’ for so long, I thought I picked up most of the poses fairly well without too much effort. They’re designed that way too – hatha yoga classes are typically for beginners with zero to some prior yoga experience.

If you’re an advanced yogi, I’d say attending Cats On Your Mats Cat Yoga is not something you’d do to really challenge your poses and take your yoga to the next level, it’s really more about the cats. 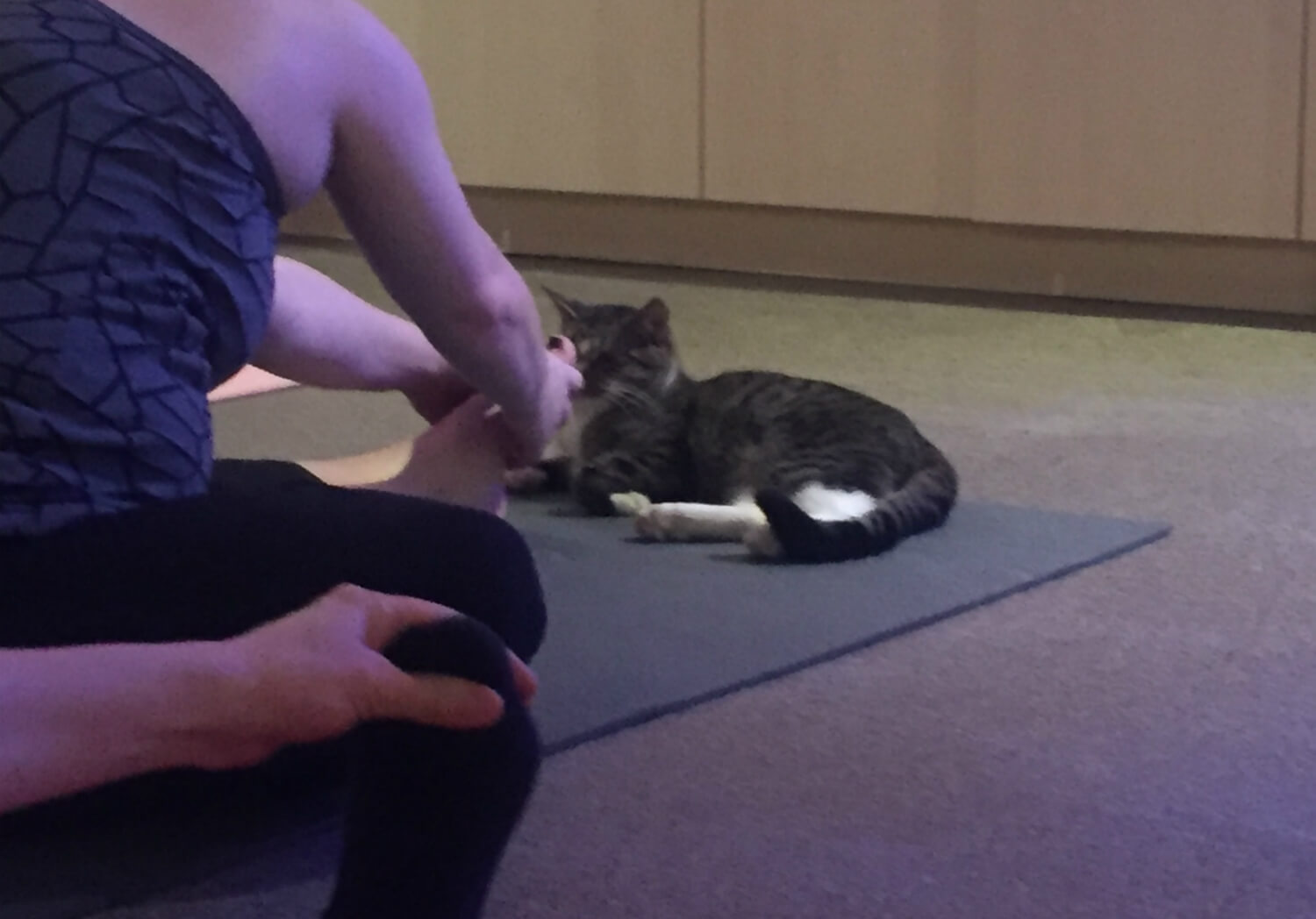 Come closer to me kitty!

For this first class, there were only two cats roaming the room which was a bit disappointing. Actually really there was just one cat because the other cat was so shy it sat in the corner watching everyone for the hour.

Typically, the classes are to have at minimum 5 cats and maximum 8 cats (which sounds a-meowzing!) but some of the cats that were supposed to be in the first session had to go into surgery, and a few other timing kinks were being worked out.

They also don’t want to put cats in that haven’t been socialized with one another before because that could end up in a cat fight! But first class participants were assured all future classes will have more cats roaming mats! 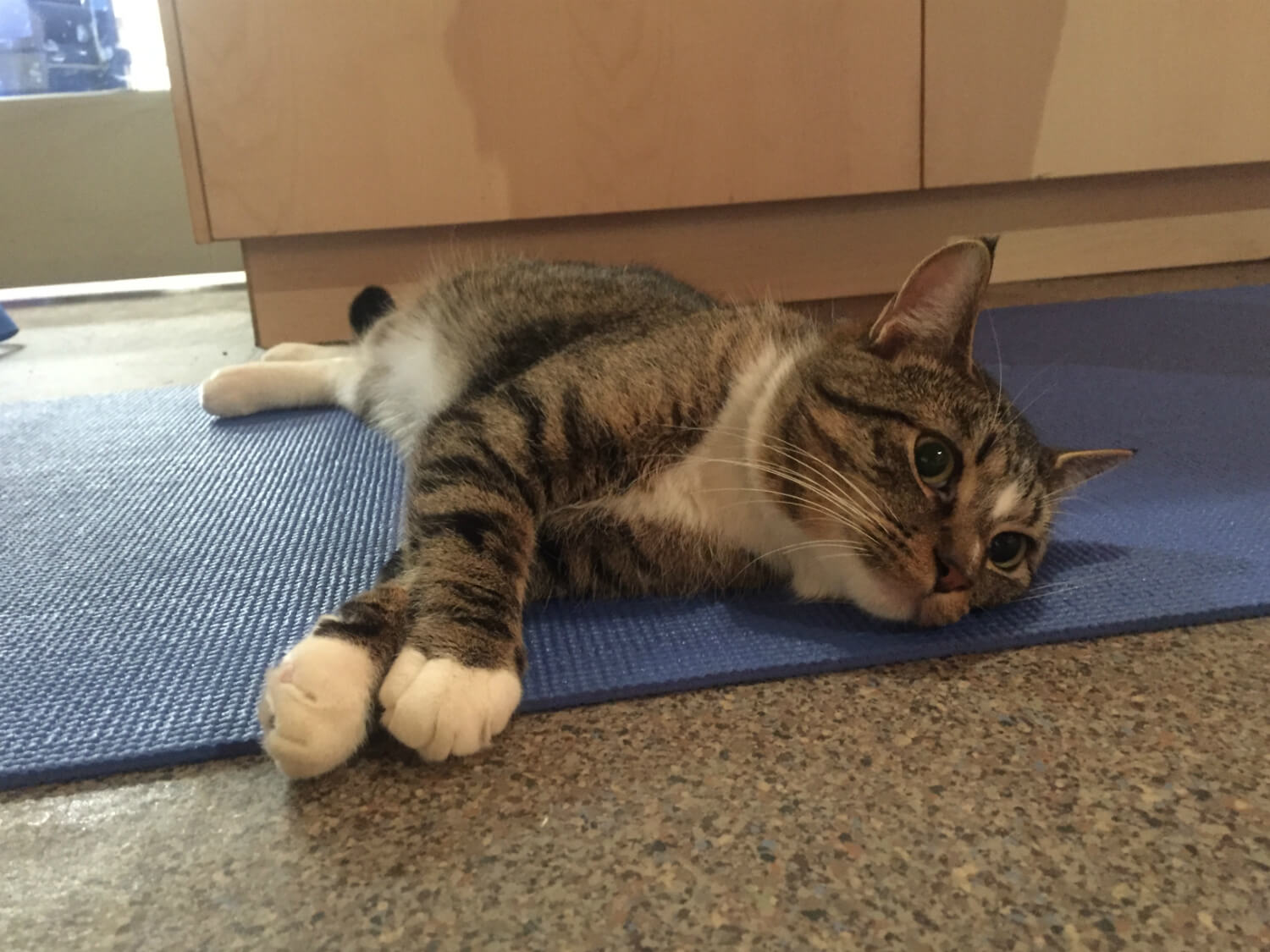 Literal cats on your mats.

The one cat that was actively roaming the room at this first session (Connor – who is adoptable by the way!) was so precious and so sociable, so I would say it was still quite a successful Cats on your Mats class.

Connor stopped by almost every mat (except mine – tears forever) and would claw the mats a bit (you should be open to having your mat clawed up a bit if attending these classes), stretch, sit, rub his head on some participant’s legs, and accept chin and back scratches (because obviously if a cat is going to come to your mat, you’re going to give it scratches!!) 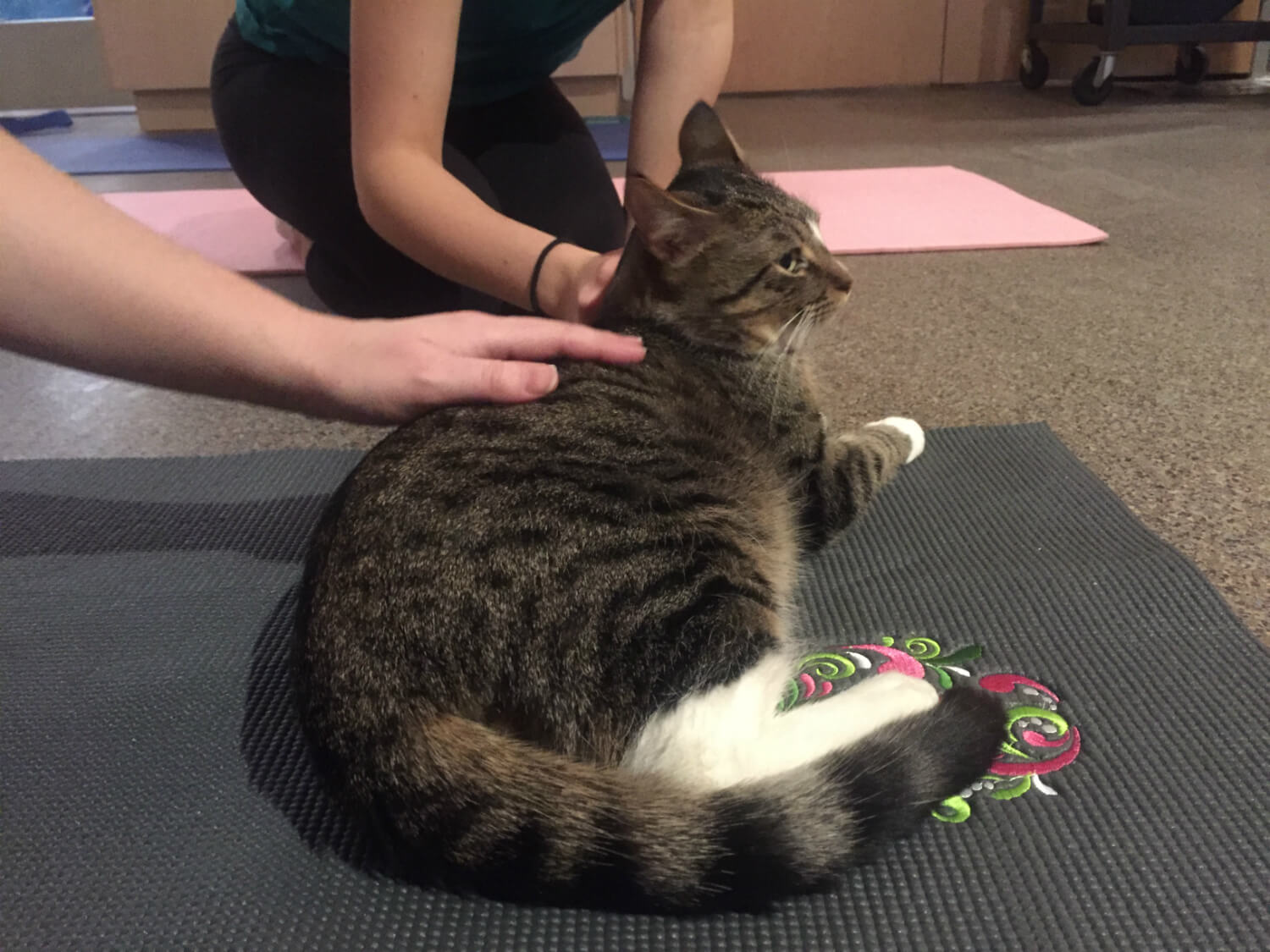 A coveted visit from a cat to your mat.

I found the class probably less relaxing than other yoga classes I’ve been in simply because I was watching for Connor the cat the whole time and willing him intently with my mind to come to my mat (it didn’t work, lol, and I had to rush over to him at the end of class to take my photos).

Lots of participants would stop mid-poses to give him scratches and pets or try to coo him over to their mats, it was funny and adorable and would probably be less distracting when there are more cats in the room. 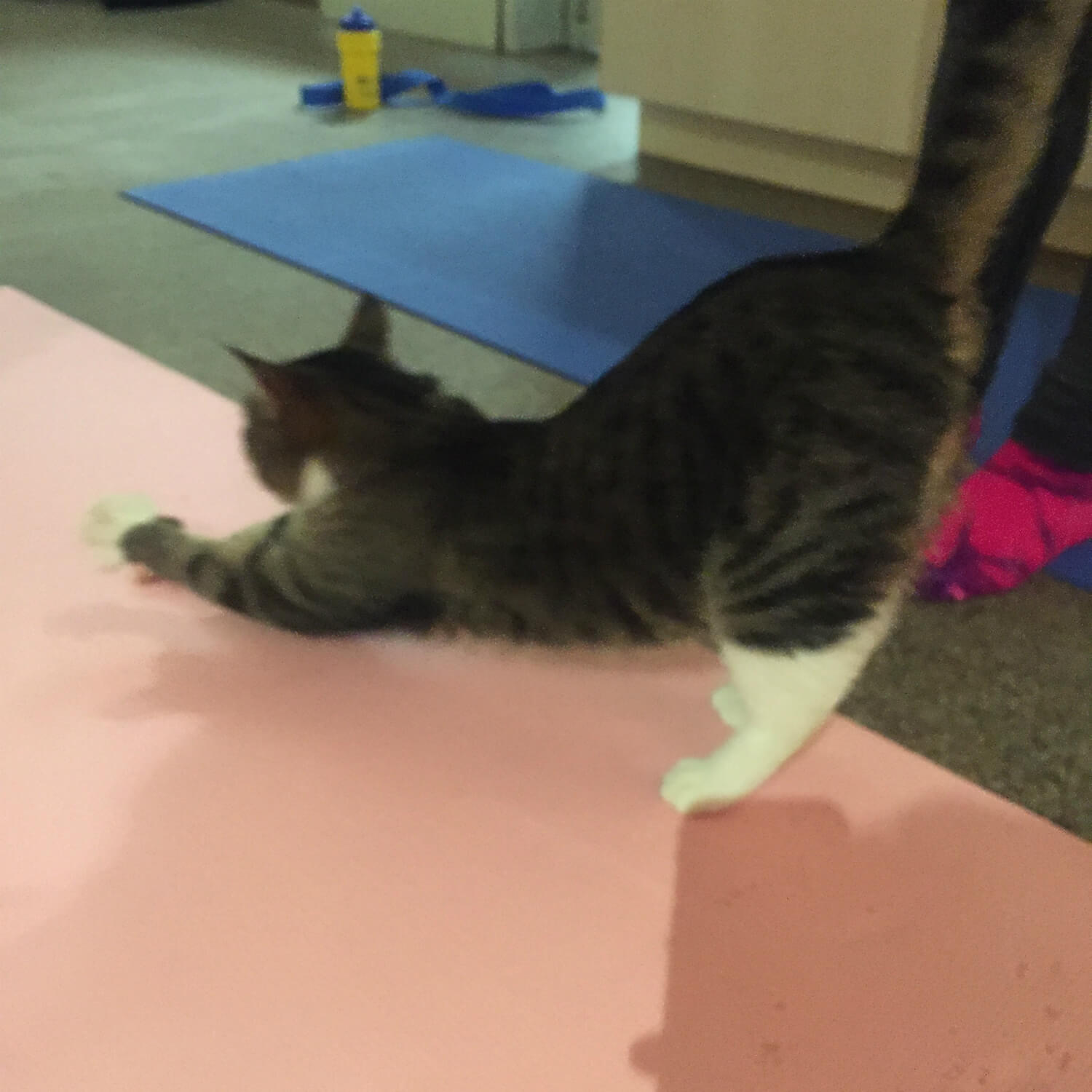 Even Connor the cat got some stretches in at Cat Yoga!

The classes accept up to about 20 people and the first class on January 9 was sold out (and now that I’m looking at the January 16 class – I see it’s also sold out!)

If you’re even slightly interested in Cat Yoga, I’d recommend you register ASAP.

Here are links to the next few Eventbrite ticket pages:

This is pricier than most regular yoga class drop-in or 7-class pass rates but I think you’re paying a bit more for the cats (think of it as a bit of an entertainment fee) and also it’s going right to support the Edmonton Humane Society and help the cats in need at the shelter, so – worth it, obviously!

I’d suggest even registering at least once just for the novelty of saying you’ve been to a cat yoga class!

Lots of new educational programming being offered by the Edmonton Humane Society!

Cats On Your Mats is just one of a number of different educational classes the Edmonton Humane Society has started offering in their Education and Training Centre.

Some of their other courses includes pet photography (beginner and advanced), pet first aid, Tellington T-Touch, and more.

The Cat Yoga series I believe is the first of its kind in Edmonton (though another rescue organization SAFE Team Rescue held a one-off cat yoga event last summer), the Edmonton Humane Society hopes to offer this cat yoga much more regularly.

I thought our instructor Char was fantastic, and the pace of the class was easy to follow and relaxing (well – as relaxing as it can be when trying to convince a cat to come visit your mat). 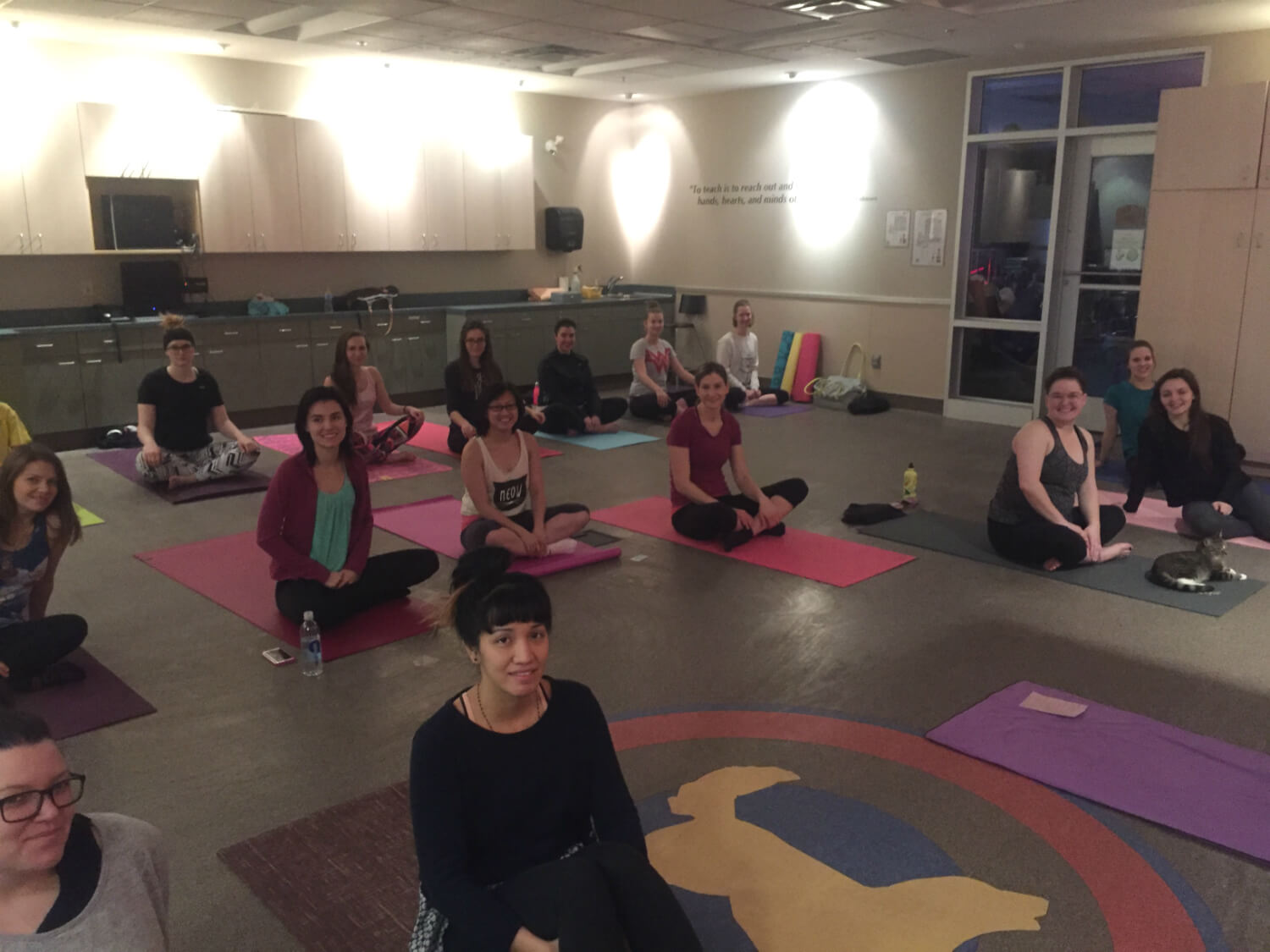 I am absolutely thrilled that cat yoga has come to Edmonton in a more permanent way.

Planning is underway for the 2016 Edmonton International Cat Festival and I am in talks with the Edmonton Humane Society to offer a pop-up cat yoga session at the festival too, so I consider my participation in Cats On Your Mats as both Cat Festival research, fitness resolution fulfilling, and completely satisfying the crazy cat lady in me.

There’s always something quite special that I appreciate when in a room surrounded by cat lovers.

Don’t attend the Cat Yoga class at the Edmonton Humane Society expecting an intense yoga workout, but do go expecting to feel really good, get some cute photos and playtime with adoptable cats, and kick off your Caturdays on a high note.

It’s also a great place to break out all your cat-themed clothes! (I wore a cat shirt and cat socks, and probably could’ve worn cat pants too. Ha. One other girl in the class also wore cool cat pants!)

Another participant even joked that she bought a 7-class pass so that at the end of the 7 classes she could bring home one of the cats. Purr-fect! If these classes can lead to finding homes for cats in need (and help socialize cats at the shelter) that’s also a big win.

So would you go to cat yoga? Have you been?! Hope to see you there!

Linda Hoang is a Canadian blogger based in Edmonton, Alberta, who writes about travel, food, lifestyle and pet topics. She's also a seasoned social media/digital strategist with a journalism background, the founder of the Edmonton International Cat Festival and co-founder of Stop Race Based Hate, an online anti-racism education tool. Linda loves exploring the world with her partner Mike, eating their way through cities, supporting local businesses, and photographing Instagrammable Walls. Linda is a fur-mom to two cats and two dogs.
PrevPreviousSocial Media Notes (#98) – Links for the Week of January 4 – 10
NextReview: Sambol Sri Lankan KitchenNext