Recap: A taping of The Colbert Report – experience + tips! 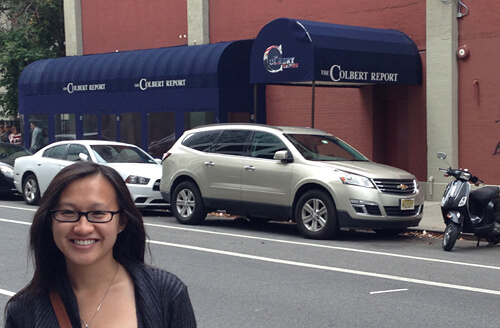 One of the things Mike and I did on the New York leg of our honeymoon was go to a taping of The Colbert Report!! We are big fans of the show and of Stephen Colbert and one of the very first things we did after deciding we would go to New York, was to get the process started on acquiring taping tickets! Read on for information on getting tickets, what happens when you get to the studio, and our particularly awesome experience with Stephen himself! :)

How to get free tickets to a taping of The Colbert Report:

By following those above steps I was able to monitor (when it got closer to the date of the taping we wanted to attend) when tickets were up for grabs and how many tickets for a particular taping were left. We had originally wanted to go to the Oct. 10 taping but the tweet notifications jumped from a big number of tickets remaining to almost nothing left so quickly that it “sold out” before I could sign up so I watched and signed up for Oct. 9’s taping instead! You really have to be quick on your computer feet when you see the tweet about the show you want to attend because tickets get snatched up so fast in the few seconds or minutes it takes to fill out the form on The Colbert Report website.

After you submit the form you will get an email reservation/confirmation and then you’re good to go! It recommends you arrive on the day of by no later than 6:15 p.m. The taping starts at 7:30. You should definitely try to get there at least a couple hours in advance to be safe, as the reservation doesn’t guarantee you a spot in and things get crowded – fast!

Waiting in line to get into The Colbert Report!

We got to the studio around 3:30 p.m. and there was already about 10 people in line ahead of us. Around 4 p.m., show staff come out and that’s when you show them your reservation confirmation and ID, and then you’re led to go wait in another line closer to the building. From 4 until about 6 p.m., the line got longer and longer. You only need one person from your reservation to stay in line until 6 if other people want to go get food, etc.

NYC street food we had while waiting to get into the show!

We ended up getting some super delicious and super cheap street food from this really nice old man near the studio. :) The line got even longer (I really should have taken a photo of the line!) and it also got very chilly and windy so it really wasn’t the most comfortable wait. The line looped around and out back into the area where we initially lined up at 3:30. Around 6, a security guard comes out and tells everyone you can’t have weapons inside the studio and then asked if there were any military/veterans in the audience. The guy in front of us raised his hand and the security guard took him to the front of the line-up, which was very nice. 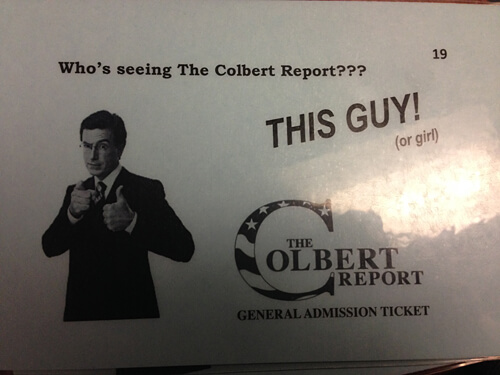 Each audience member gets one of these as they go into the waiting room!

We finally started being let inside the studio (warmth!!) Each audience member is given a blue sign with a number so they can keep track of how many people are in the audience. There were also some people who had red signs that said similar things but also said VIP on it. All that really got was to let them into the actual studio before everyone else for front row seats but they still had to wait in the audience waiting room with the rest of us commoners. ;) 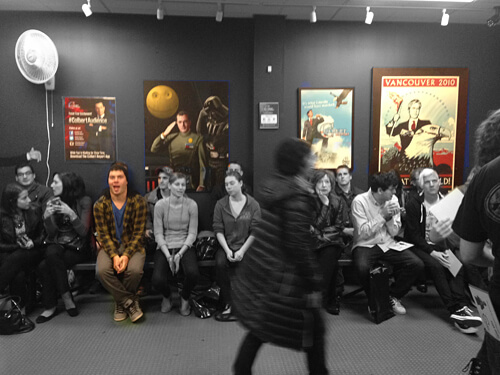 In the waiting room!

The room filled up very, very, quickly and I was curious if they would end up turning people away. I was measuring it by a group of people who were standing across from us in the line outside – after the line had winded all the way down and around. They did end up getting in but I know there were people still outside the winding waiting line area that I think maybe didn’t make it in. The studio really isn’t that big! No pictures allowed – security was very strict about that. You also have to go through a metal detector when you get to the audience waiting room. 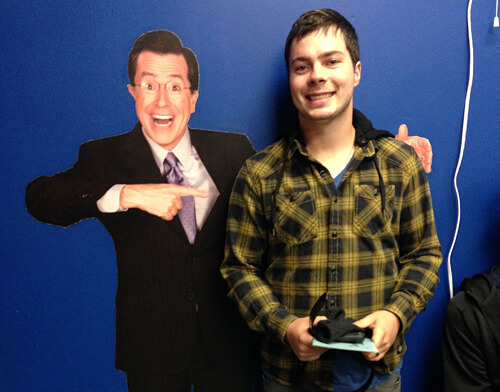 Mike hanging out with Stephen Colbert in the audience waiting room ;)

While we were on our honeymoon we didn’t have a data plan so we were relying solely on wifi to be connected. You can imagine how long (and cold) the wait outside felt without wifi access, lol. But once we got into the audience room, Mike found this TCR_Audience wifi account! It is password protected though but my new husband the hacker (apparently lol) himself, managed to crack the wifi code! (It’s StephenColbert.) 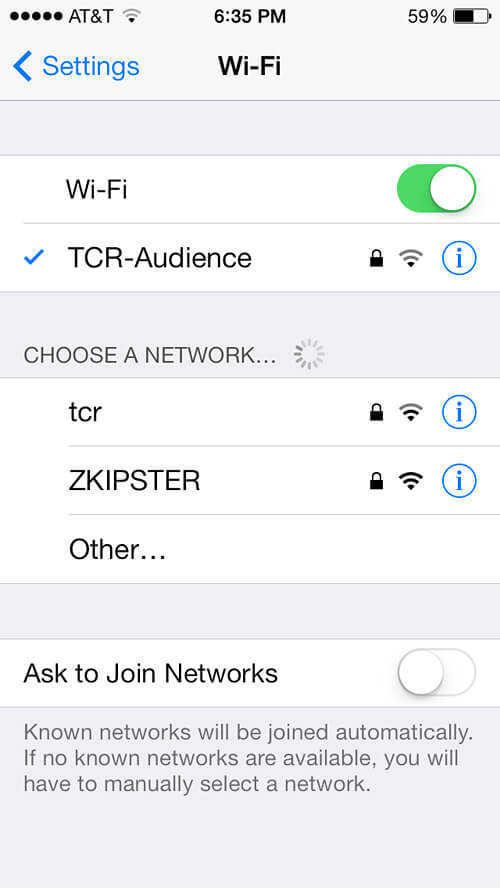 The Colbert Report Audience wifi! Locked you say? We figured out the password!

After everyone is seated, they have a comedian come out to warm the audience up. The comedian reminds everyone how important it is for us to laugh big and clap loud. Stephen Colbert feeds off of our energy so we need to make sure we put a lot of energy out there! The floor/stage manager also came out and told us pretty much the same thing. He also said Stephen would be coming out before the taping begins and would answer a few questions. I knew I wanted to ask a question but I just wasn’t sure what – perhaps something Canada-related. Mike thought that would be lame. Lol. When Stephen came out (audience goes crazy of course!) he pointed at a girl in the front row for a question. She asked him if he could listen to one song for the rest of his life, what would it be. He said a very long title of a classical song that I can’t recall, and then asked her “do you know it?” The girl surprised him by saying “yes! I love it too!” Stephen says “I love you.” Lol it was very funny. He then took out his iPhone and flipped through his music to find the classical track (he mumbled certain songs as he flipped through it, including ‘Glee Soundtrack’ haha). Then he put his mic up to the iPhone and we listened to the classical song for a bit. That all took a bit of time so I think normally he would answer more than just one question but since he did all of that stuff, the taping started right after and he took no more questions – which was a little disappointing but oh well.

Watching the taping was very interesting – I think especially for me coming from a TV background. Stephen and the floor manager know the script/run-down so well. When a joke isn’t executed as well as they like, they do it again, picking up at such and such time or after such and such line. It was very professional, very seamless. Stephen actually ended up messing up quite a bit, and laughing it off a lot. The first time he screwed up he said ‘and that’s the end of the show! Thanks for coming.’ In between show segments, his writers would come out and crowd around his desk for an intense discussion on what I assume was how the first segment went, if something should be re-taped, and what was coming up next.

In his opening, Stephen said that Tom Hanks would be the guest for the show so the audience obviously freaked out over that. We were all very excited to see Tom Hanks but then after we had gone through the first few segments, Stephen told us that unfortunately Tom had a scheduling conflict so they had to pre-tape him earlier – so that would be the end of the taping. No! He said he obviously didn’t want to tell us this at the beginning of the show because he wanted to make sure our energy was still high. To make up for Tom not being there, they let us watch an edited segment that they were planning on airing on a later date.

Stephen said since we don’t get to see an interview segment, he would answer a few more questions from the audience. YAY! My hand shoots right up. He points at me. We make eye contact. ;) I had no idea what I was going to ask but then the question just comes out: “What advice would you give to newley-weds?” Then I did an exaggerated motion pointing at myself and Mike. Stephen laughed. Then he says that that day was actually his 20th anniversary with his wife! Awesome. The advice he gave us: “Don’t hold back on saying sorry. It’s not worth it! Just say sorry.” Then he adds “You know who I’m talking about.” And I pointed to Mike. Lol – happy wife, happy life! So that was pretty great. :)

Another girl then asked how heavy an Emmy is and Stephen picks up an Emmy that’s sitting on one of the shelves on his set and then says ‘Come on down and hold it!’ The girl was super excited and came down to hold the Emmy – which wasn’t even one of the ones Stephen had recently won, it was one from the Daily Show that was just being used as a prop, lol! It wrapped up after that and we were all given Colbert show hats, pens, and Mike had caught a ‘Wrist Strong’ bracelet that Stephen was flicking out into the audience. So there was quite a bit of Colbert swag involved.

You can watch the video of the taping we’re on by clicking here. (Though it doesn’t work for Canadians, lol damnit). We normally PVR our Colbert Report shows but for some reason it didn’t record :( We downloaded a torrent and watched though, and I swear there are moments where you can very distinctly hear my laugh! Lol You can also sort of see Mike in the audience panning shot, if you pause the screen and go back frame-by-frame. Ha. 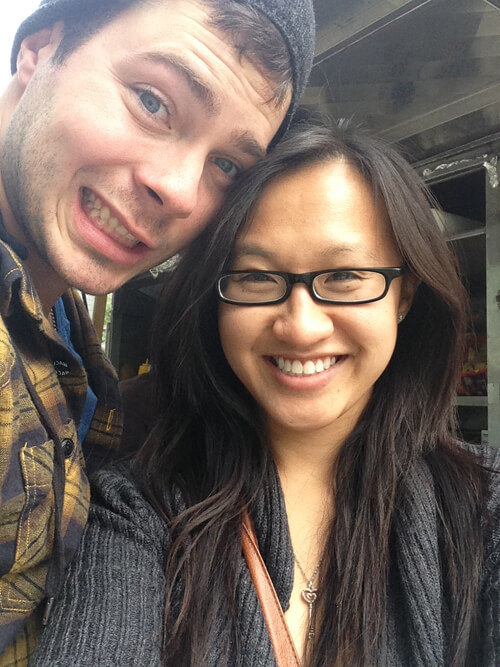 Great first activity for our honeymoon!

Overall, it was a pretty awesome experience that we would definitely do again if we’re in New York! We also really want to go to a taping of the Jimmy Kimmel show so when we’re in California we’ll do that for sure too. :D There is definitely a lot of waiting around involved and it can get kind of boring and that day – very cold, so you should definitely dress warmly. But once you get in then it’s just all adrenaline and excitement from there.

It was an amazing and very Mike & Linda-appropriate activity to do on our first night in New York!

Linda Hoang is a Canadian blogger based in Edmonton, Alberta, who writes about travel, food lifestyle and pet topics. She's also a seasoned social media/digital strategist with a journalism background. Linda loves exploring the world with her husband Mike, eating their way through cities, supporting local businesses, and photographing Instagrammable Walls. She is the founder of the Edmonton International Cat Festival and a fur-mom to two cats and two dogs.
PrevPreviousNo more Edmonton Sun, catch my social media stories here!
NextSocial Media Spotlight: A look into the past with Vintage EdmontonNext