I finally attended my first Edmonton Expo this year! Mike and I went on Sunday (it was Mike’s second Expo) and had such a great time. We had two main reasons to go: one) to meet Doctor Who’s Jenna Coleman (Clara/The Impossible Girl/Souffle Girl) and two) to hang out with our niece and nephew who are also pretty big into superheroes/comics/etc., thanks to their geeky dad.

The Jenna Coleman photo op / meet was the biggest reason though, and I find that meeting that *one* (or two or three) people is probably the main reason a lot of people go to the Expo. I know a lot of people went this year to meet Stan Lee and a lot of old school Buffy the Vampire Slayer fans were super excited to meet Spike and Tara (and Faith/Eliza Dushku).

I almost seriously contemplated dropping hundreds of dollars (along with a flight/hotel) to go see David Tennant at a Con in the U.S. awhile back lol – fandoms are serious things guys. 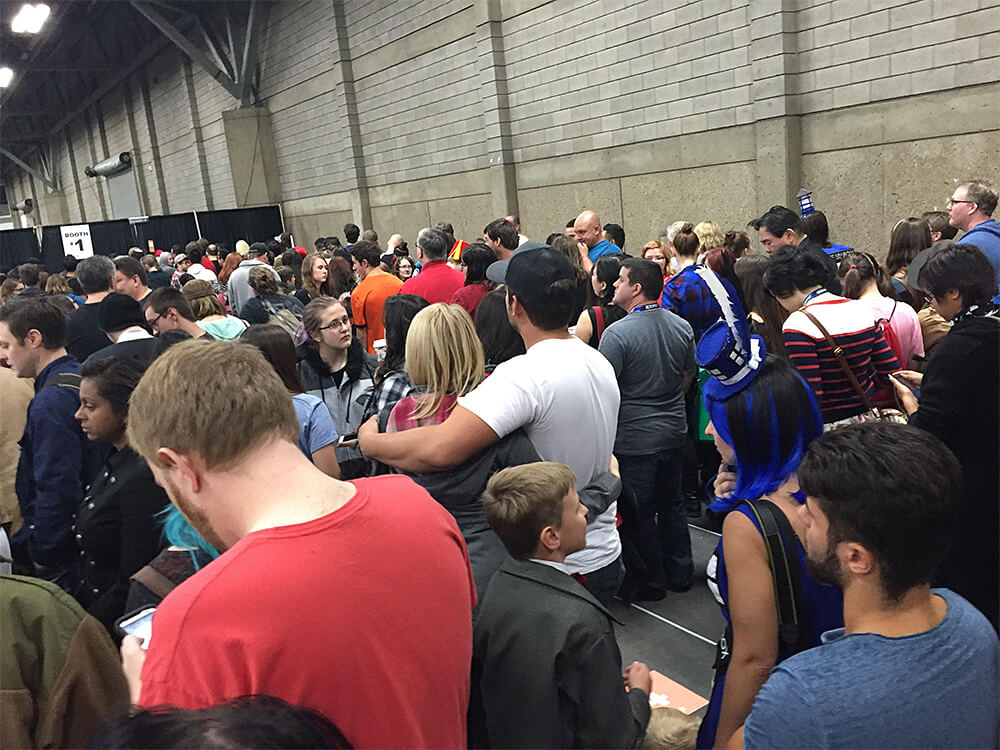 Anyway, our photo op with Jenna Coleman was at 1:15 p.m. on Sunday and we got to the line-up around 1. There was also a 1 p.m. wave (and I think a 1:30 p.m. wave but we were in that mid-1:15 group). At first glance, you think, oh my gosh, we will be waiting forever for this. But we were both pleasantly surprised at how quickly the line actually moved. That’s because, literally, you get no time to talk to the star you’re doing the photo op with, lol.

It’s a very robotic but don’t get me wrong smooth, quick, and easy process but you’re literally in and out posed with her for the photo and gone in under a minute. She said “hi how are you” to us and we said “good thanks!” – we quickly shuffled into position, the camera went off, and we were out the other way. Jenna looked super frazzled, and I can’t imagine how much her mouth must have hurt from smiling in so many pictures, for so many people! But it’s a system that clearly works and accommodates a lot of fans. 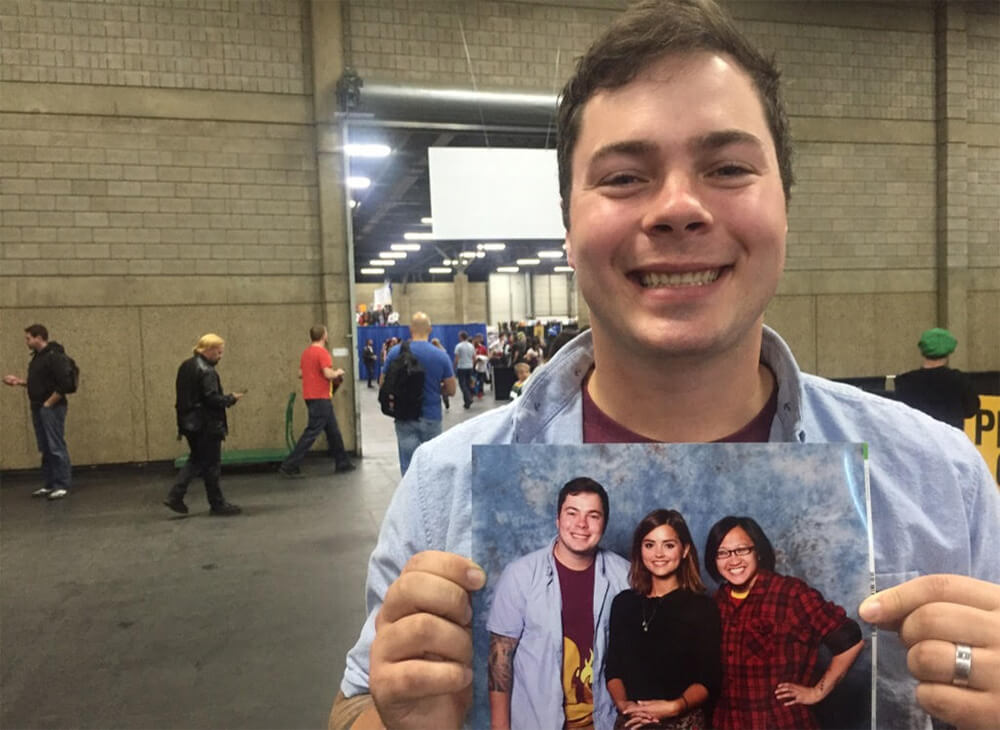 I think so many people can get so many different things out of the Edmonton Expo. I know for us, our main goal was to meet that celebrity from the show that we’re obsessed with – and once we did that, we felt pretty accomplished already. A lot of people go Edmonton Expo (or other similar events) because they want to dress up and do cosplay. A lot of people go because they want to see people dressed up in cosplay. A lot of people actually take part in/take advantage of the different panel sessions and presentations from local and celebrity guests – and why not? You paid the $20-$30 admission to be there, might as well soak up as much included content/programming as you can!

We were pretty bummed we weren’t able to sit in on Jenna Coleman’s talk because by the time it started, our niece and nephew had arrived and that took us in a completely different Edmonton Expo direction. 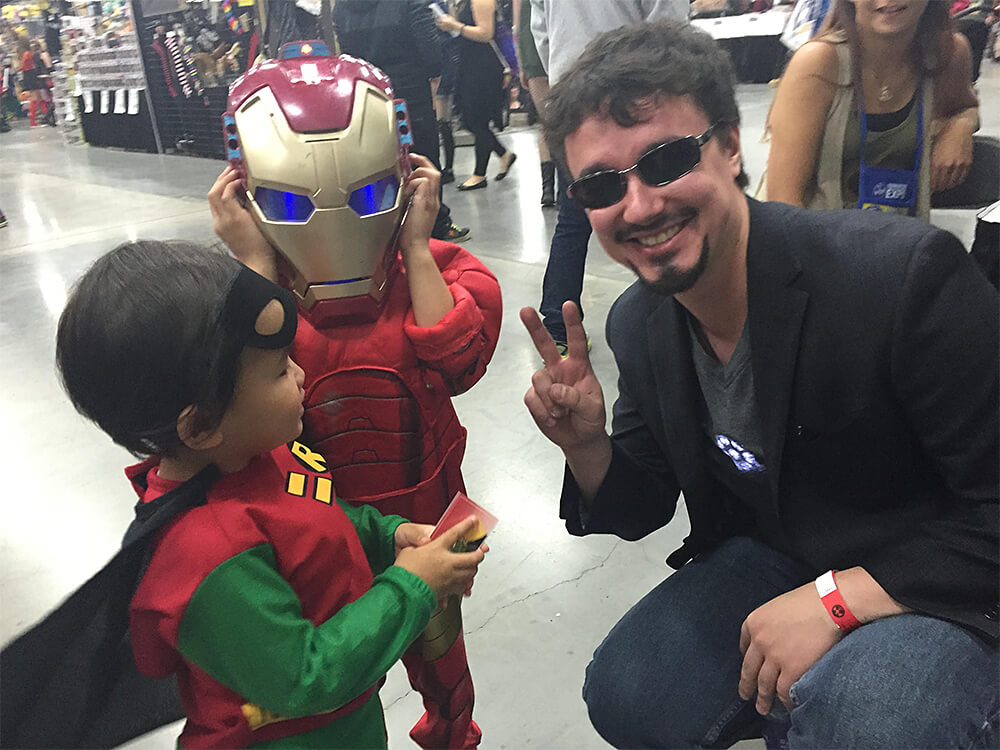 Going to the Edmonton Expo with little kids who are dressed up is suuuuch a cute experience. Our little nephew was dressed up as Iron Man and our niece went as Robin. To see the look on their eyes every single time some elaborately dressed up character walked by – ah! My heart.

A Spider Woman wanted to take a photo of our Iron Man, our Iron Man wanted to find “big Iron Man” (no luck, but we did see big Tony Stark). He saw Two-Face from Batman and was terrified, hiding behind his dad’s leg. They’d point at or run up to different artists in Artist’s Alley because they recognized the drawn characters. 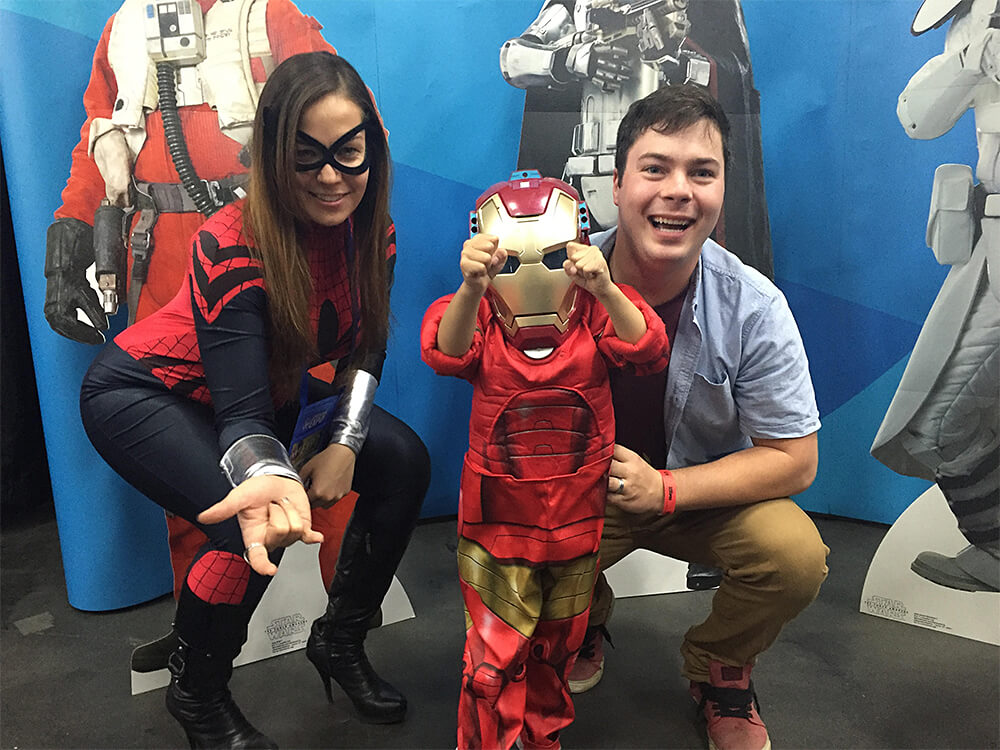 They looked in wonder at whole cosplay families walking around. It was so adorable (or if you are a Happy Endings fan, as Penny would say, it was “saw kewt”). Their dad’s rule for the day was that they could each pick one item to take home. Little Iron Man was adorable because he kept stopping at booths picking things and we kept reminding him that he can only choose one so is he absolutely sure that’s the one item he wants or does he want to keep looking (because there was still SO much to see) and he would choose to keep looking.

After about an hour he came to a little action figure bin where he sought out an Iron Man for himself. His dad really lucked out because the mini action figures were just $5 a piece and I think his dad had been expecting to send more in the $30-$50 range so – whew :D 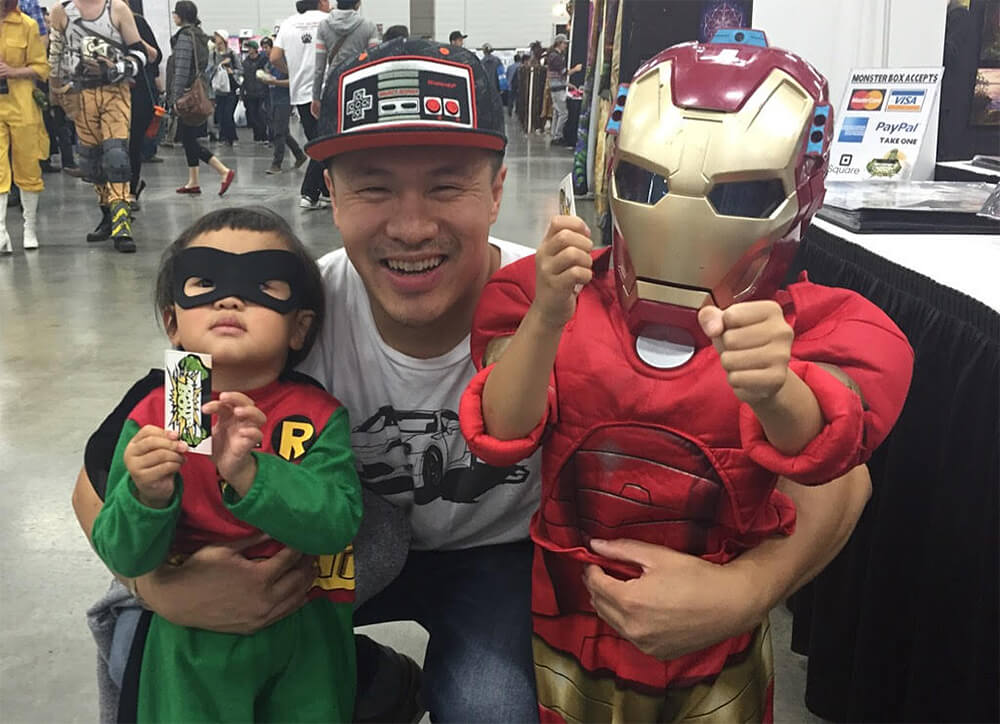 Robin and Iron Man with their dad at Edmonton Expo.

The kids also got to play in the Kids Fun Zone, which featured a lot of bouncy castles and obstacles. There was also free laser tag going on (though the line-ups were pretty significant and moved slower than the photo op line-ups). Then there was just so much browsing to be done! 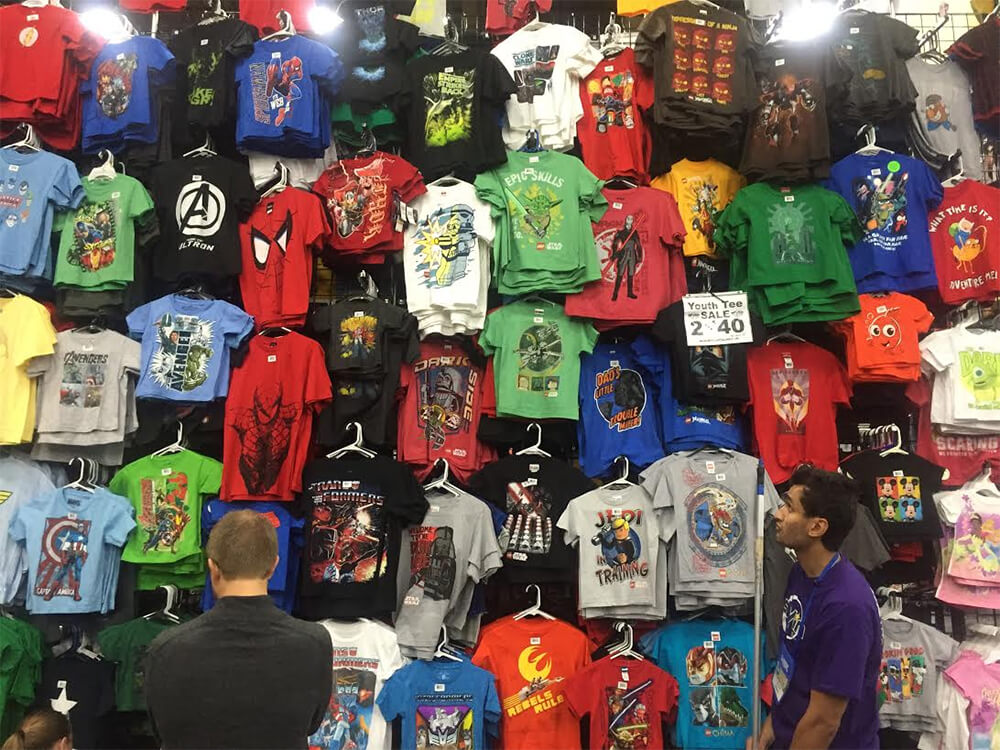 Mike and I got most of our Expo vendor browsing done before we met with the kids. I wanted some kind of a comic/super-hero or Doctor Who-themed dress but I couldn’t decide on which ones to get.

Mike on the other hand knew exactly what he was looking for and bought it almost immediately – the kanto Pokemon picture set to be framed and hung at our house. (He obviously had to purchase the additional Pikachu picture). 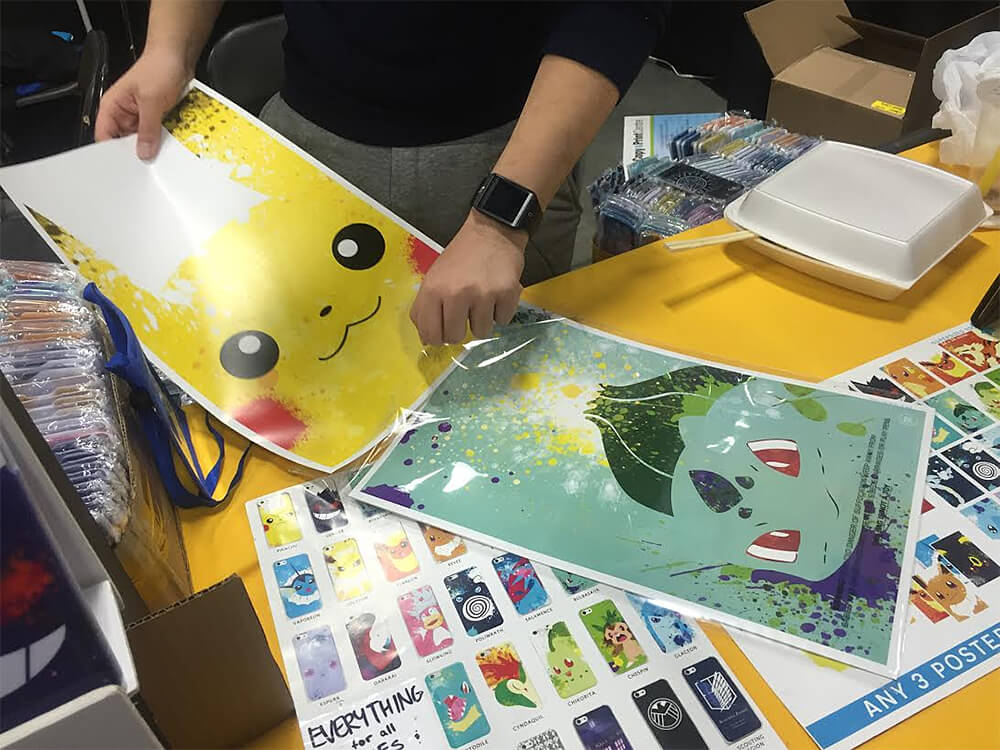 Mike knew what he wanted and went for it (at Edmonton Expo).

He was also on the hunt for some old N64 controllers and possibly games. He’s slowly building out his (geeky) man cave, so an expo like the Edmonton Expo can be a great place to get furnishings and equipment for something like that! 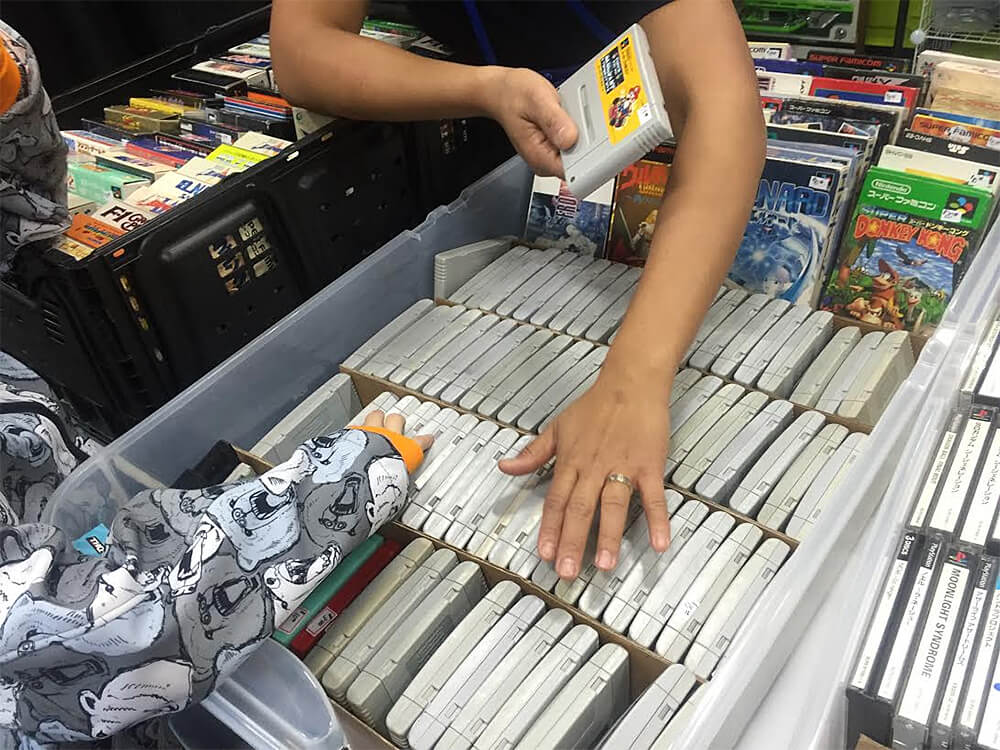 Beyond the photo with Jenna Coleman, and soaking up the cuteness with my niece and nephew, I was more interested in people watching / cosplay picture taking. 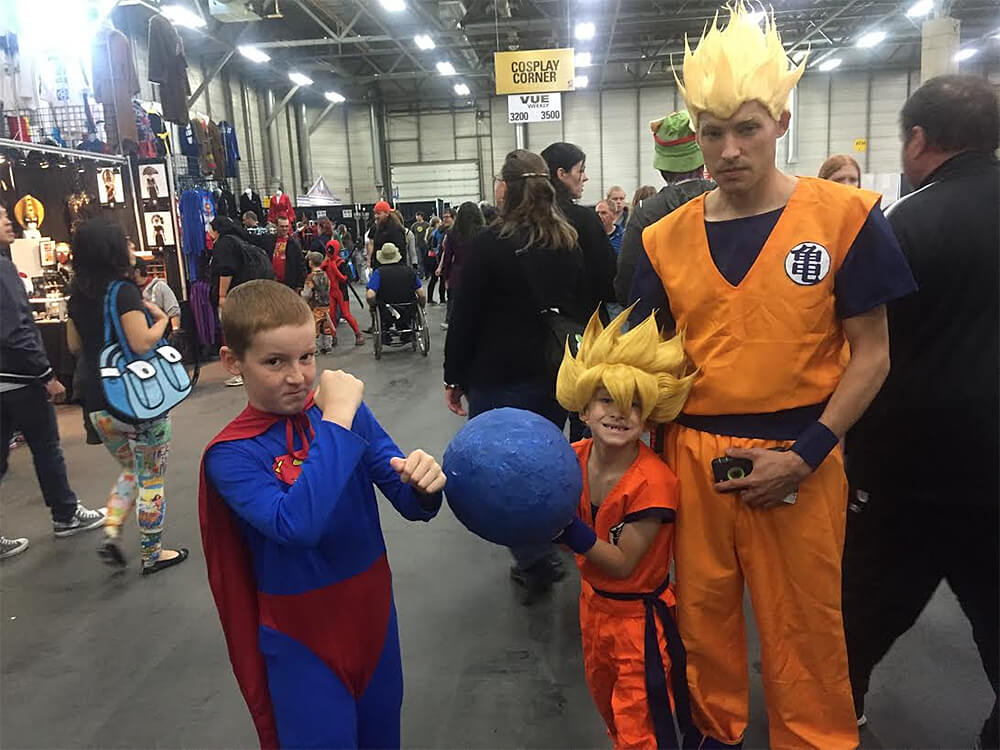 A very Saiyan family (plus Superman) at Edmonton Expo.

I had full intentions to participate in local author Marty Chan’s Edmonton Expo selfie bingo game but once we met up with the kids it got a lot harder to do. I think going into the Expo with a fun game like that is a great way to make sure you stick around for awhile, and forces you to really be on the look-out/watching for what people are dressed up as. So fun! 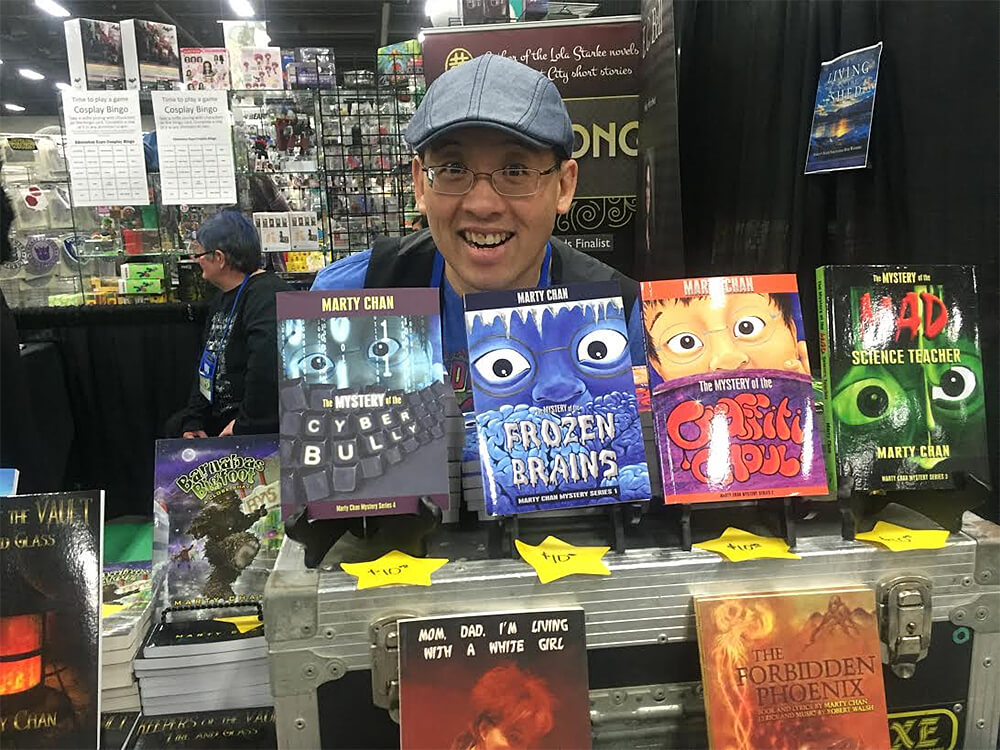 I couldn’t believe the amount of Doctor Who characters I saw (both in the line-up for Jenna Coleman but also just in general Expo crowds). Mike and I have said for many years that we need to go to an Expo (or Con) and dress up – and in the last couple years we’ve said we want to go and dress up as Doctor Who characters, but we never actually commit to doing it. This year I put in a half-assed attempt to look like Amy in the Silence episode but I was wearing Mike’s plaid jacket that was too big on me and of course my hair wasn’t ginger so it just really didn’t work, lol.

Here’s hoping next year we put a bit more time and effort into our outfits because I think it’s so fun when you do get all into it. Certainly our niece and nephew had so much fun all dressed up and they got so much attention for it. Even with my half-assed attempt, I still got a few people complimenting me on my Amy outfit! 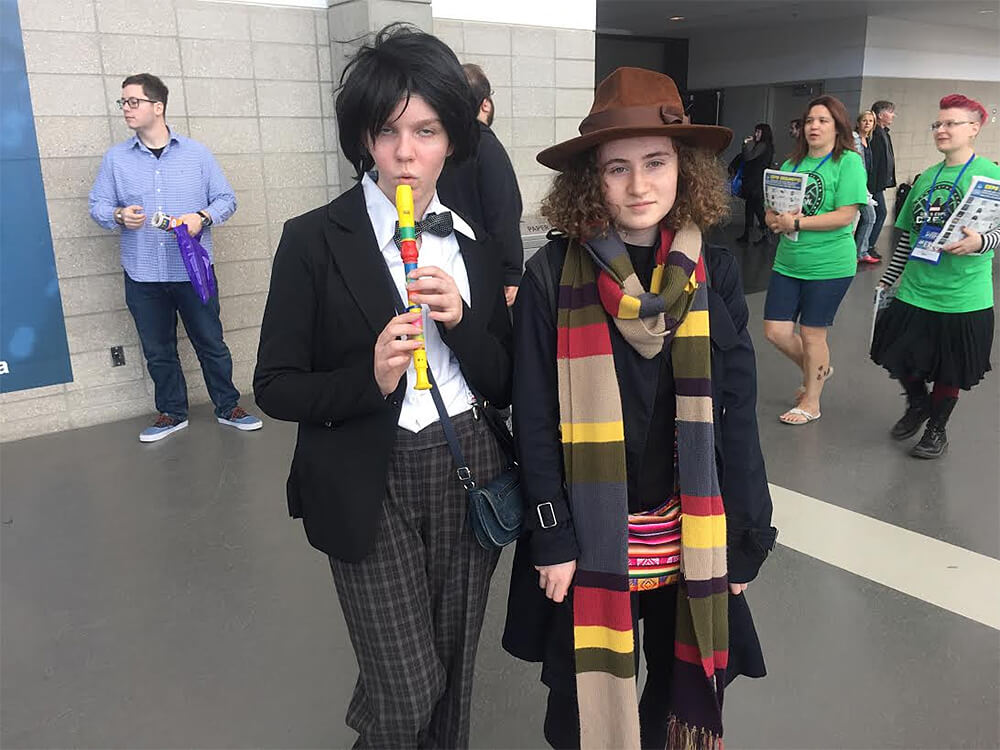 We had lunch at some of the food trucks serving up Expo crowds – Mike at Smokehouse BBQ and me at Molly’s Eats. I loved how Molly’s Eats named their menu items after pop-culture themed phrases/words. The Harry Potter butter beer was quite tasty (and not as sweet as the butter beer you get at Harry Potter World in Florida!) There was also a Quidditch pitch set up by the food trucks so we watched that for a bit during our lunch break. We also met up with my other brother and his girlfriend later in the afternoon too and ran into a few other friends along the way – it was the place to be that weekend! 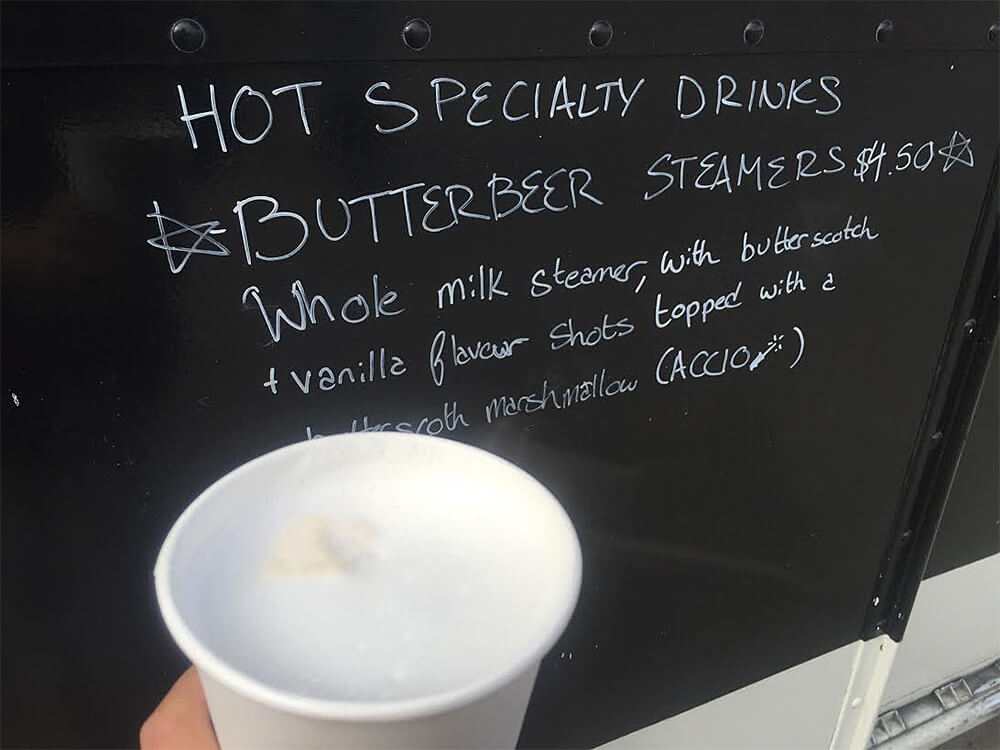 Overall, my very first Edmonton Expo was a lot of fun and with my niece and nephew especially – we made some pretty sweet memories! I got to go as a guest this year (and I was excited to give away a pair of free weekend passes on the blog earlier in the month) but Mike and my brothers did pay for their admission.

I’d definitely recommend coming early in the day so you can make the most out of admission price – sit in on as many panels/presentations as you can, take advantage of the food trucks and Northlands food options, browse the vendors and then after a break, come back and re-browse to see if you’ve missed anything (or if you weren’t committed to getting something earlier, if you still find you want it on the second loop around, you should probably get it!) Sitting out in the hallways just watching the cosplayers pass you is also great fun as well (that people watching!)

I think the $20-$30 admission (in advance/at the door) is fairly reasonable (to make it cheaper, buy in advance!) but only if you go early in the day so you can really get as much out of the day as possible. My brother came closer to end of day and paid at the door – plus parking, didn’t really get as much value out of that cost as Mike and I did.

Also, if there are kids in your life – dress them up and take them with you! You’ll make their day and it will make your day.

So did you go to Edmonton Expo this year?! What was your favourite things to do? Did you meet any celebrity guests? Buy anything? :) Let me know in the comments below!

Linda Hoang is a Canadian blogger based in Edmonton, Alberta, who writes about travel, food, lifestyle and pet topics. She's also a seasoned social media/digital strategist with a journalism background, the founder of the Edmonton International Cat Festival and co-founder of Stop Race Based Hate, an online anti-racism education tool. Linda loves exploring the world with her partner Mike, eating their way through cities, supporting local businesses, and photographing Instagrammable Walls. Linda is a fur-mom to two cats and two dogs.
PrevPreviousWhat to do for Halloween 2015: Edmonton (and area) Event Listing
NextGiveaway: Tickets to the Just For Laughs Canadian Comedy Tour 2015 via Nightlife Poster EdmontonNext