Purina Pet People: 20 years of Petfinder & the importance of adopting

As most readers know, we have a house full of pets – two cats (Thor and Loki) and two dogs (Olive and Artie).

Thor was a farm cat we rescued out by Mike’s parents place in the country. Loki we found off Kijiji, but the circumstances were that if we didn’t take him when we did, he would’ve been put down. Olive is from a beagle breeder north of Edmonton and Artie we adopted from Zoe’s Animal Rescue.

This year, Petfinder.com is celebrating its 20th anniversary. Petfinder is a database of hundreds of thousands of adoptable pets from more than 13,000 shelters and rescue groups throughout North America (with over 600 groups in Canada).

Despite it being around since 1996, I’d never heard of it until now – but I’m glad I’m probably in the minority here. More than 25 million pets have found their forever homes through Petfinder since it was created 20 years ago (that’s 1.2 million pets per year!) Now it’s reaching even more people – as it joined the Purina family in 2013.

Although we found all of our animals (or maybe they found us) in different ways, our newest addition to the family – Artie – was our first true adoption experience and when I look at him and think of him, I can’t help but wonder how differently his life (and ours) would’ve been if we hadn’t found each other. 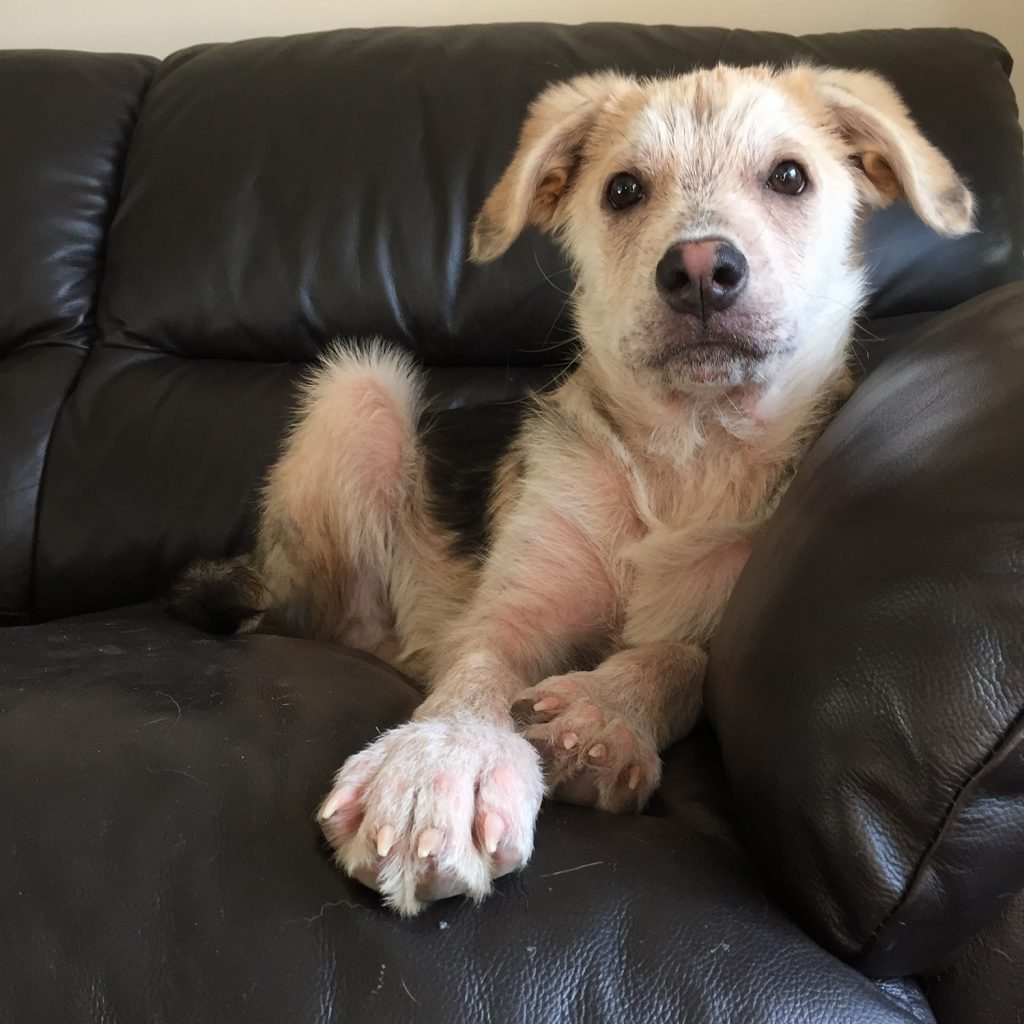 Artie had a bad case of mange. He ended up losing most of his fur and was red and itchy all over.

Artie came to us with a severe case of demodectic mange. The first 6 months of his life were pretty rough – he lost most of his hair from the mites, he couldn’t stop itching (we were pretty sure he only didn’t scratch himself when he was sleeping, eating, or on walks. Otherwise, he was always trying to scratch the mange itch). He also had some parasites in his stomach that at one point led him to throw up and have diarrhea for hours (had to go to an emergency vet).

People looked at him differently (usually alarmed – or worried that he would infect them somehow) and it always seemed like there was something – get him on a different diet this week, try out this cone to see if it stops him from itching, we need to give him these different types of medication to see which one might work. Sometimes he would be so itchy he’d just sit here and whine.

But despite these challenges, he was still so happy. And he made our lives so happy! 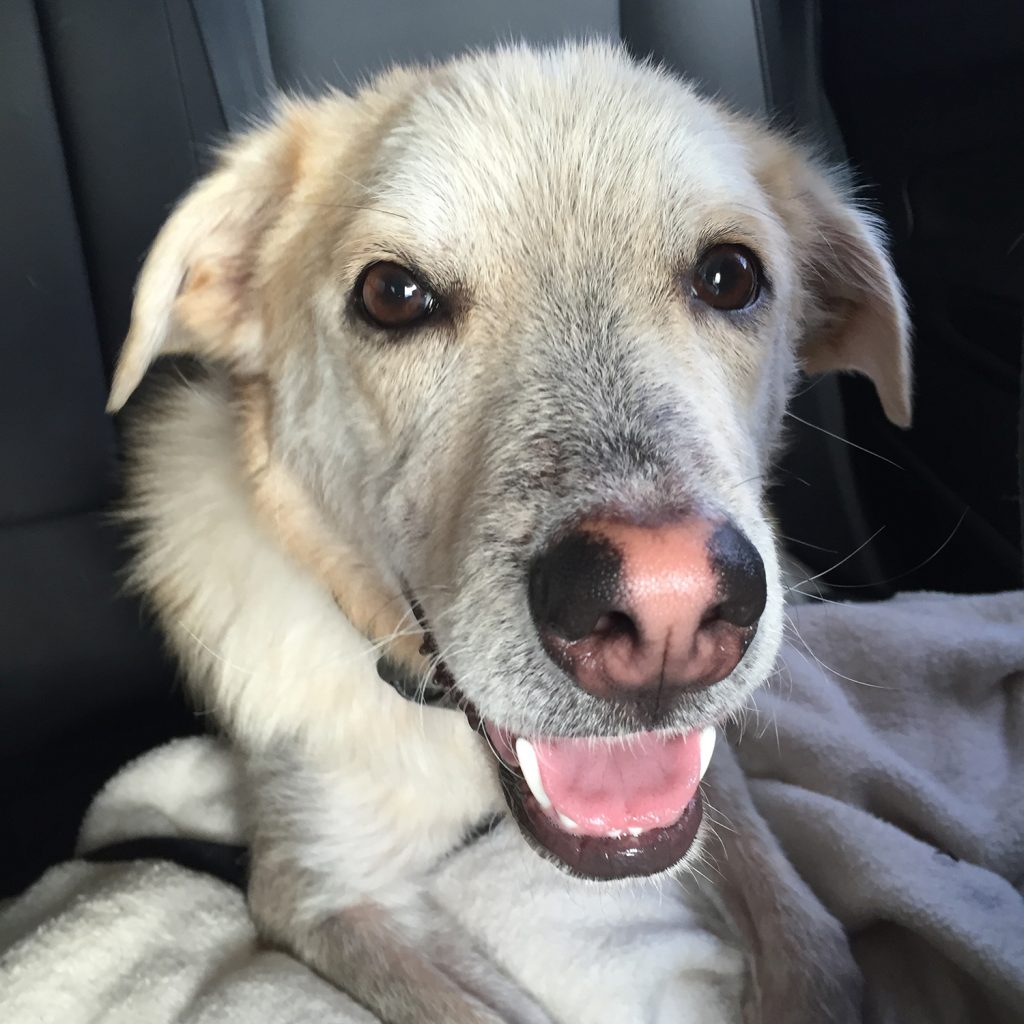 After some great treatment from the Edmonton Holistic Vet – Artie has all his fur back!

We loved him and he loved us and now we’re thrilled to say his mange has completely healed (it took a year – Nexgard was the treatment that fixed him and it was recommended by the Dr. Jennifer Marshall at the Edmonton Holistic Vet), he’s got all his fur back, hardly itches anymore, and he’s one of the cutest dogs you ever did see (we’re a bit biased of course).

When I think of Artie’s story, I think of how differently his life could have gone. If he hadn’t been rescued from Zoe’s, if we hadn’t been lucky enough to adopt him – he would most certainly not be here today (I get teary thinking of that).

Watch Petfinder’s 20-year anniversary video below and see how adoptable pets have truly transformed the lives of their adopters.

Leave a comment or tweet me (use hashtag #MetOnPetfinder) your adopting story! I’d love to hear it.

Did you meet your pet on Petfinder? Even if you didn’t, how has adopting impacted your life?

Our hearts are certainly fuller having Artie (and Olive, Thor, and Loki) in our lives.

It’s comforting knowing more than 25 million other pets in North America have brought the same joy to their owners.

Disclaimer: I will always provide my 100% honest opinion on this blog. This blog was posted as part of my Purina Pet People brand ambassador partnership. This has no impact on opinions stated in this post.

Linda Hoang is a Canadian blogger based in Edmonton, Alberta, who writes about travel, food, lifestyle and pet topics. She's also a seasoned social media/digital strategist with a journalism background, the founder of the Edmonton International Cat Festival and co-founder of Stop Race Based Hate, an online anti-racism education tool. Linda loves exploring the world with her partner Mike, eating their way through cities, supporting local businesses, and photographing Instagrammable Walls. Linda is a fur-mom to two cats and two dogs.
PrevPreviousGiveaway: Arrive in the Black – $100 Prestige Black Car Gift Card Giveaway
NextSocial Media Spotlight: Top Edmonton Instagram Users to Follow (version 5)Next