Lindork’s Lists #15: How to support the #BlackLivesMatter Movement

As some of you may know (and be subscribed to), I’ve been sending out a weekly email newsletter every Wednesday since February 2020. It makes suggestions on “Things To Do, Places to Eat, and Things to Know This Week” and includes interesting things I’ve found on the Internet, social media tips and musings, and Instagrammable Wall listings too. Subscribers get the full newsletter on Wednesdays, and then on Thursdays I share a truncated version on social media. I haven’t actually shared about it on the blog (oops?!) but decided to make this week’s newsletter (June 3, 2020 – Lindork’s Lists #15) public and posted on the blog as it focuses on #BlackLivesMatter resources.

Lindork’s Lists #15: How to support the #BlackLivesMatter movement

Educate yourself and take actions to become an effective ally. 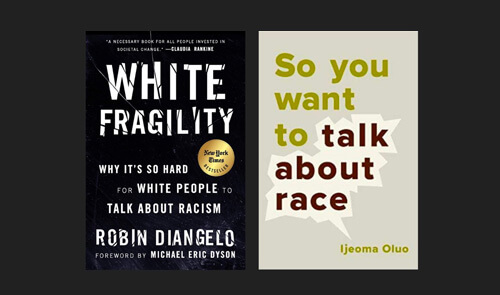 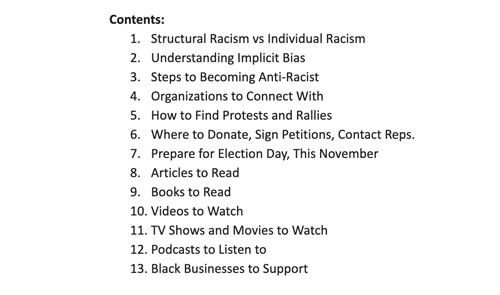 Anti-racist researcher Victoria Alexander put together a great list of anti-racist literature we can read to become better allies to Black people. I’ve ordered So You Want To Talk About Race by Ijeome Olue and Between the World And Me by Ta-nehisi Coates from Edmonton’s Glass Bookshop, which focuses on Canadian writing with special attention paid to LGBTQ2SIA and IBPOC writers.

Victoria Alexander also put together an Anti-Racist Resource Guide outlining not only books, but videos, TV shows and movies to watch, articles to read, podcasts to listen to, where you can donate, and steps to becoming anti-racist, understanding implicit bias and structural vs. individual racism. As she writes, “Please share widely to your friends, family, students, and colleagues. Thank you for your allyship.”

Also read this Guide to How You Can Support Marginalized Communities. 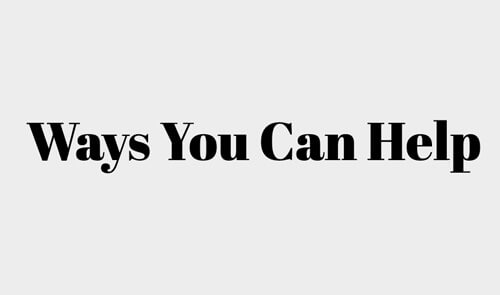 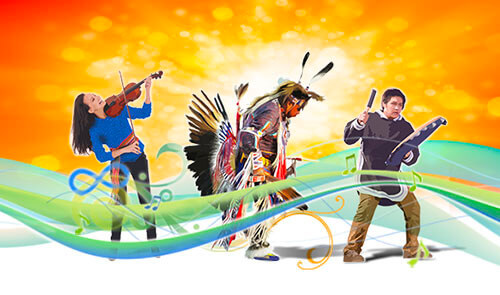 “This doesn’t go away once the topic isn’t trending.” Check out this website Black Lives Matters for links to petitions, places to donate, information for protesters, and more anti-racism resources. There is so much to learn and so much we can all do to help in meaningful ways. And remember, if you are able to donate, your donations does not need to be a big amount to make a difference. It’s about doing what you can—and that might look a bit different for everyone, but the point is, at least you should try.

I’ve heard from Canadians this week who felt like we do not really have the same racism problem here as in the States. That is simply not true. June is National Indigenous History Month. There is much education and change to be done with how Canadians treat Indigenous peoples. The #RISEFilmFest continues this week, offering free access to important Indigenous films. Tune in. This week also marked the 5-year anniversary of the Truth & Reconciliation Commissions’ Calls to Action.

You can also check out this Twitter thread by Tisha Raj on local (Edmonton area) Black Lives Matter organizations that could use your support and donations, or that offer further resources to be an ally. 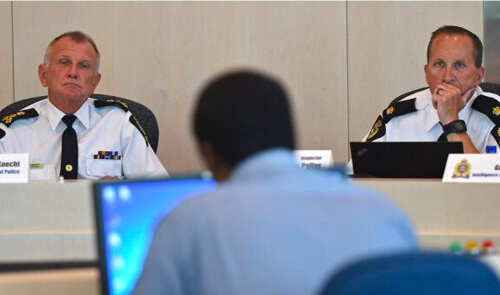 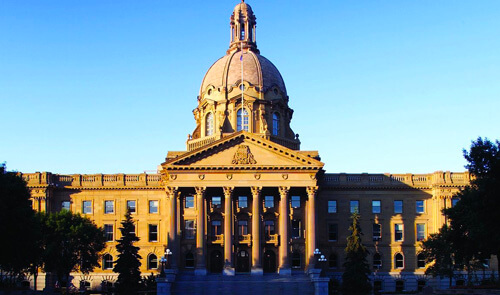 Equality for All Rally in Edmonton

There is also a rally taking place at the Alberta Legislature this Friday at 6:30 p.m. to protest the killing of George Floyd. Please consider physical distancing to prevent the spread of COVID-19 if you are attending.

Here are some Black-owned restaurants in Edmonton that you could support: 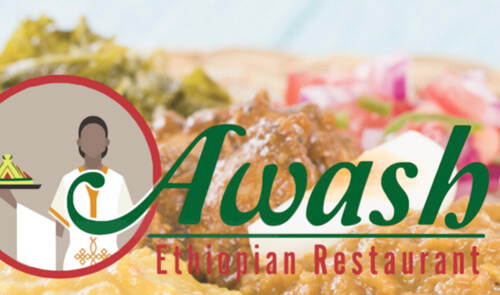 Mike and I are had lunch to-go from Awash Ethiopian Restaurant this morning. I love Ethiopian food and have had it with friends over the years but Mike’s never tried the cuisine until today. The Zilzil Tibs (beef) and Doro Tibs (chicken) + Veggie Combo are must-orders. All mains come with Injera bread or rice! Absolutely delicious!

A few other Ethiopian restaurants I’ve tried and loved in Edmonton include: Abyssinia (McCauley), Walia Ethio Eritrean (98 Street), or Bete Africa Ethiopian Restaurant & Bar (Norwood). Langano Skies is also very popular (Old Strathcona). They would all be great spots for you to consider picking up take-out or getting delivery this week (and moving forward). 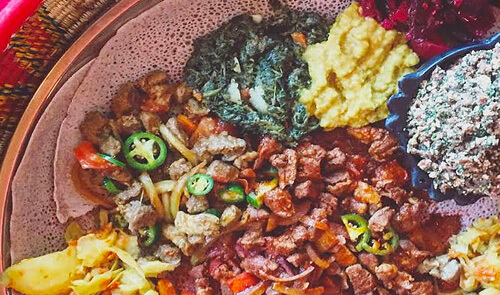 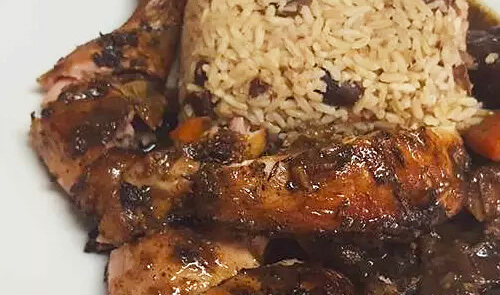 Chef Warren moved to Edmonton in 2007 and has always wanted to run a restaurant to showcase Jamaican cuisine!

I tried Caribbean’s Finest on Alberta Avenue for the first time last year during the area’s Eats on the Ave food event and loved my meal.

They are a family-run, independent restaurant offering high quality Caribbean food. Give them a try! I’m sure you’ll love it. 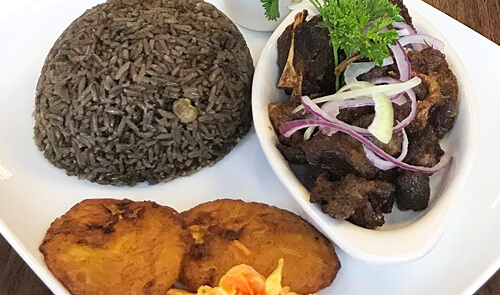 I’m also a big of fan of Mama Asha Cafe on Alberta Avenue, but they are currently closed and set to do a grand re-opening this summer. Date TBD. Hopefully soon, at which time, you should try them as well. The portion sizes are gigantic for a really great price (and delicious food!)

You can also check out this list of Edmonton Black-Owned Businesses. 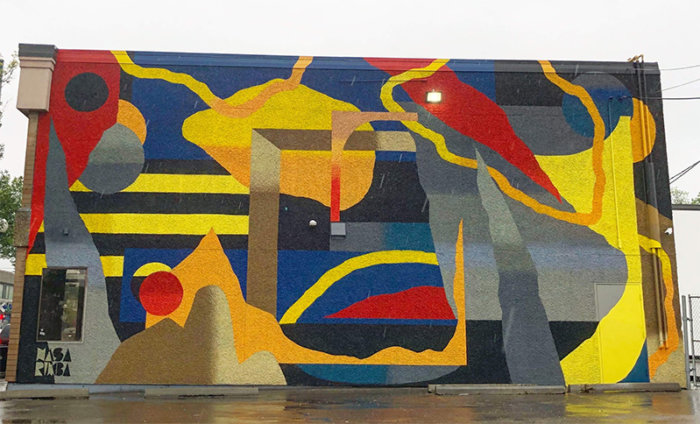 I love this Instagrammable Wall on the side of Habesha African Market in Edmonton (104 Street and 107 Avenue). It was created by a Calgary-based artist duo called Nasarimba. When you visit for a photo, head inside to support this local business and pick up some groceries too!

Also consider intentionally following and supporting more BIPOC (Black, Indigenous or People of Colour) artists (local or beyond). You could start with this year’s featured artists of the 5 Artists 1 Love art exhibition:  @artbybuddan, @jaydontae, @carlamooking, Samuel J Mensah, and Braxton Santiago-Garneau (though I couldn’t find an online presence for him).

If you are seeing a resurgence of “All Lives Matter” statements in response to #BlackLivesMatter, I found this article: Why you should stop saying ‘all lives matter,’ explained in 9 different ways to have some pretty helpful examples you could use in response to people in your life who may say this. I particularly found the comic strip above powerful, as well as this short video explainer from @JITEAGEGE, and this law professor’s response to complaints received about wearing a Black Lives Matter shirt. The sad part is that these explanations and even the article are from 2016, which is three years after the #BlackLivesMatter movement began, and here we are in 2020.

Most people on my feed this week posted a black square on their Instagram account in solidarity for the Blackout Tuesday movement. The original intent of the day was meant to ask people (particularly in the music industry) to pause posting unrelated content to their social media and instead help amplify and share Black voices, posts, and other #BlackLivesMatter resources. Somewhere along the way, it morphed into posting a black square and “muting” yourself from social media for the day. I think this was confused with a different movement I saw of people saying they were muting their posts for a week. This idea of “muting yourself” received backlash because the black square (hashtagged with #BlackoutTuesday and #BlackLivesMatter ended up drowning out important posts about protests, resources, and actions people can take to be better allies. There as also backlash because the Black community felt like for many posting the black square, that might be *all* you end up doing. And if that is all you are doing to support them, then that’s not really supporting them at all. There was also criticism because of the notion that silence = violence and being silent right now is not helping.

Whether or not you meant well from your post, it in the end was more damaging than it was helpful, and I think for this week’s Social Media Did You Know, I just wanted to share a reminder that we should all not be so quick to jump on a trend, or something you may be seeing lots of people are doing, just because you’re seeing lots of people doing it. Do research. Ask yourself why you would participate (in whatever it might be). Who is this for? What does it mean? Who does it hurt? Consider the downsides. I think many likely felt pressure to post a black square (if I don’t post a black square, am I racist?) but the pause and considerations are so important. Just like you shouldn’t automatically retweet or share an article on social media before you’ve clicked in to read what it’s actually about (headlines can be so misleading) and being share-happy without investigating further often leads to spread of misinformation and “fake news”.

I think this was also a good reminder that it’s okay to make mistakes. As long as you recognize the mistake was made and try to rectify it.

For further reading on this, check out this post from @girlpowertbh.

I will continue to share resources on my social media as I find them, amplify Black voices online, intentionally choose Black-owned businesses to support, and have conversations with those in my life about anti-racism and #BlackLivesMatter. I’ve been mindful not to make posts related to this “about me”—and am trying to be helpful, including using my platform to raise awareness and hopefully encourage action.

Linda Hoang is a Canadian blogger based in Edmonton, Alberta, who writes about travel, food, lifestyle and pet topics. She's also a seasoned social media/digital strategist with a journalism background, the founder of the Edmonton International Cat Festival and co-founder of Stop Race Based Hate, an online anti-racism education tool. Linda loves exploring the world with her partner Mike, eating their way through cities, supporting local businesses, and photographing Instagrammable Walls. Linda is a fur-mom to two cats and two dogs.
PrevPreviousRecipe: Vietnamese Steamed Pork Buns – Bánh bao (Life’s Simple Ingredient)
NextGuide to Black-Owned Restaurants to Support in EdmontonNext