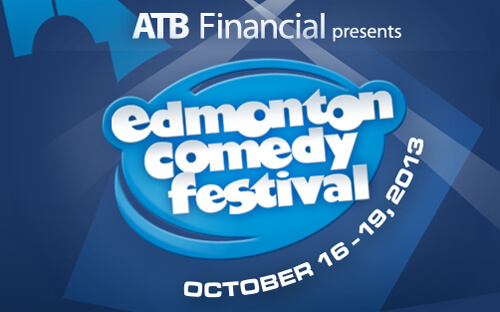 You know it’s got to be a good giveaway for me to be doing this the week leading up to my wedding… but this is a good one. I’m giving away a pair of Gala Tickets to the Edmonton Comedy Festival!!

The third annual comedy festival has an amazing line-up – more than two dozen of the funniest comics in North America performing on several stages across Edmonton over several days.

“With a mix of new acts and returning festival favourites, it’s official: Funny Has Hit the Capital City. From snappy young home grown heroes, to veteran comic masters, to Youtube sensations, to a Saturday Night Live star this festival has it all!”

This Edmonton Comedy Festival is organized by my friend Graham Neil and it’s one that I would be going to if I weren’t on my honeymoon during that time. But that’s no reason why you can’t get in on the laughs!

How to win your way into the Edmonton Comedy Festival!

To enter for a chance to win two gala tickets, leave a comment below telling me a funny joke. Include your name and email address so I know how to contact you! Also include your Twitter account if you have one. I will randomly choose a winner based on those who have left comments.

You can also get your name entered into the mix a second time (this is highly recommended) by tweeting out this sentence:

(This only gets you an additional entry IF you have left a comment telling me a funny joke below. You must comment to qualify! Note: Comments need to be moderated unless you’ve left a comment before. So if you don’t see your comment show up right away, don’t fret!)

Congratulations to Leah Dykstra (@LB25rae) for winning!! Thanks to all who entered. Your jokes were hilarious!