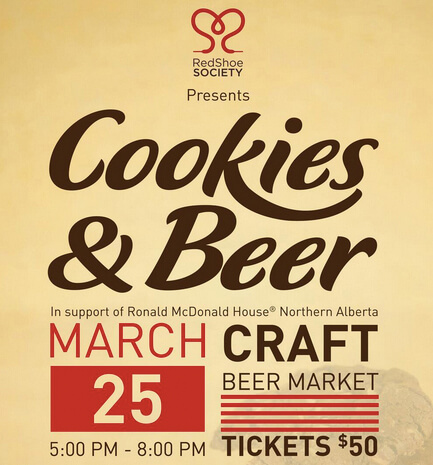 Some of you may know that I volunteer on the Red Shoe Society board. The Red Shoe Society is an organization of young professionals who support the families of the Ronald McDonald House Northern Alberta by participating in Home for Dinners and organizing signature, generally food-related (!!) events. The society’s signature food events in the past have been our Red Shoe Crawls – along Whyte Avenue and along 124 Street.

This year we’re teaming up with Cookie Love, Alley Kat Brewing Company, and Craft Beer Market Edmonton to put on Cookies & Beer, an evening of sweet and savoury pairings with proceeds supporting the Ronald McDonald House! 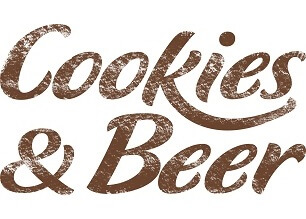 Cookies & Beer is all about good food and entertainment – enjoy brilliant cookies, appetizers and beverages while supporting the House. I’m giving away a pair of tickets to the event!!

How to win your way into Cookies & Beer supporting the Ronald McDonald House!

You can also get your name entered into the mix more times (this is highly recommended) by:

1) Tweeting out this sentence:

* Please let me know in your comment below that you followed the Red Shoe Society on Twitter or Facebook, or followed the Ronald McDonald House on Twitter, in order to get the additional entries. ONLY NEW FOLLOWS/LIKES COUNT. Also note these bonus entry options only count IF you have left a comment answering the above question. You must comment to qualify! Note: Comments need to be moderated unless you’ve left a comment before. If you don’t see your comment show up right away, don’t fret! :)

In the meantime, not sure about your chances? purchase tickets to Cookies & Beer here and help us spread the word! #cookiesandbeer #yegfood :)

*** UPDATE *** Congratulations to Tamara! She’s won a pair of tickets to Cookies & Beer!

Linda Hoang is a Canadian blogger based in Edmonton, Alberta, who writes about travel, food, lifestyle and pet topics. She's also a seasoned social media/digital strategist with a journalism background, the founder of the Edmonton International Cat Festival and co-founder of Stop Race Based Hate, an online anti-racism education tool. Linda loves exploring the world with her partner Mike, eating their way through cities, supporting local businesses, and photographing Instagrammable Walls. Linda is a fur-mom to two cats and two dogs.
PrevPreviousKing Noodle House – Top 24 Best thing to eat in Edmonton!
NextSocial Media Notes (#20) – Links for the Week of Feb. 24 – March 2Next