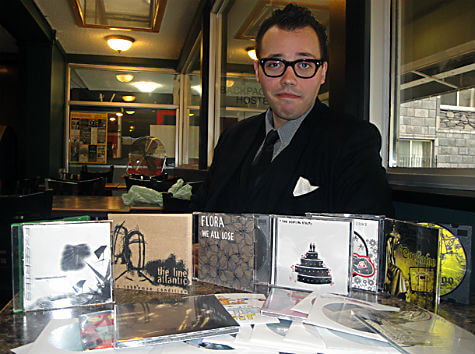 Bo Jr. Oldman with Jekyll + Hyde, is collecting music from Edmonton artists to fill the venue’s “local jukebox” in an effort to continue promoting the city’s musical talent.

But not just any kind.

He has a particular affection for music of the local variety.

His family’s pub and live music venue, Jekyll + Hyde (The Hydeaway) at 10209 100 Ave., has featured Edmonton musicians for years and it’s now embarking on a new local music project.

Oldman, 28, has spent the last month collecting albums from Edmonton artists to be featured in The Hydeaway’s new “local jukebox.”

“It’s a project that’s been underway for a little while. It’s an exciting idea,” Oldman said.

“It’s something different. I don’t think anyone else in town is doing something like this.”

The jukebox can hold up to 100 CDs and Oldman is hoping to fill at least half of it with songs strictly from Edmonton-based artists.

To offer Edmontonians another option for local music consumption, as well as to help promote local bands.

“There’s a lot of talented people in this town and unless you’re listening to a show on CJSR (campus/community radio) or one or two other very isolated areas, you can’t hear some of this stuff,” Oldman said. 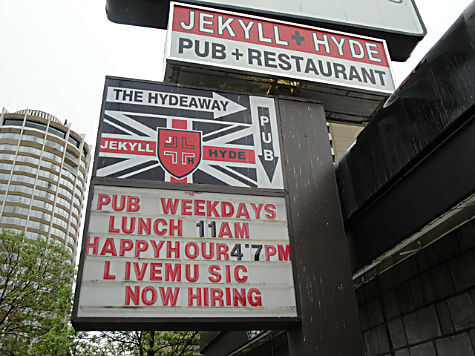 A new jukebox put in place at Jekyll + Hyde’s “The Hydeaway” venue, will largely feature music from Edmonton artists.

Currently undergoing renovations, the top room is the pub and restaurant that currently holds a jukebox featuring a variety of songs, while the downstairs room called “The Hydeaway,” features live music and is also where the new local jukebox will be placed when it’s complete.

Oldman says along with wanting to create a new and different outlet to help promote musicians, the business’ location itself, also prompted him to pursue the local jukebox idea.

He says the pub and Hydeaway venue is attached to the GO Backpackers Hostel, which means a lot of customers passing through often inquire about “what’s local.”

“They ask about local food, local sights, and local music.”

So far, Oldman has received about 30 CDs and is in the process of sifting through them all, checking to make sure all of the music works properly, and creating jukebox labels.

He’s pleased with the number of submissions so far, given that the local jukebox project hasn’t been too heavily advertised.

In fact, many artists who will be featured in the local jukebox have been submitted by fans rather than the artists themselves, Oldman says.

“I think it’s cool that people want to listen to my work when they’re hanging out at the Hydeaway.”

Hoyer, 26, had heard about the jukebox project, but was actually waiting for his new eclectic pop album to come out at the end of June, before submitting.

He says when the new album, Doug Hoyer Walks with the Tender and Growing Night, does come out, he intends to get it into Oldman’s jukebox.

Jekyll + Hyde’s jukebox project is also being commended by other local music businesses.

Blackbyrd Myoozik on Whyte Avenue has been a long-time supporter and promoter of local music, and Jason Troock, the store’s manager, says a local jukebox is a very interesting idea.

“I think it’s pretty cool,” said Troock. “I would be inclined to put money in that jukebox.”

The independent music store has since it began, featured a dedicated section solely for albums and records by local musicians.

While Blackbyrd still houses local music, just a few weeks ago Troock made the decision to move local artists into their respective genres.

“We’d had a lot of bands through the years say that their music would be better served being in the actual section,” he said.

Troock believes certain businesses, such as his music store and, in Jekyll + Hyde’s case, venues that feature live, local artists, are something of a “community centre” for musicians, helping them get and maintain exposure.

And that’s exactly what Oldman hopes his local jukebox contributes to.

“We always try to give small fry independent folks a chance,” Oldman said.

“If you’re curious about what is going on in our town, you should be able to go some place and find out. Say, ‘let’s see what else is in Edmonton for music, I know this one place where you can go and check out the jukebox,’ it’s something to consider.”

The deadline for submissions to the local jukebox is May 31, but Oldman says he’ll also accept late submissions.

He hopes to have the local jukebox ready in time for Jekyll + Hyde’s birthday party at the end of June. 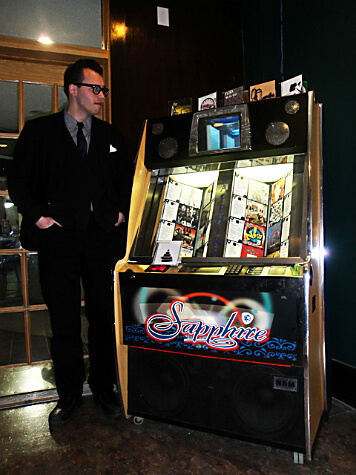 LISTEN TO SOME LOCAL MUSIC:

Some of these artists’ music will be featured in Jekyll + Hyde’s local jukebox.

Linda Hoang is a Canadian blogger based in Edmonton, Alberta, who writes about travel, food lifestyle and pet topics. She's also a seasoned social media/digital strategist with a journalism background. Linda loves exploring the world with her husband Mike, eating their way through cities, supporting local businesses, and photographing Instagrammable Walls. She is the founder of the Edmonton International Cat Festival and a fur-mom to two cats and two dogs.
PrevPreviousClicks of the Day: Thursday May 26, 2011 Edition!
NextClicks of the Day: May 27,28,29 2011 Weekend Edition!Next