Feature Story: Edmonton philanthropists add more “awesome” to the world one idea at a time 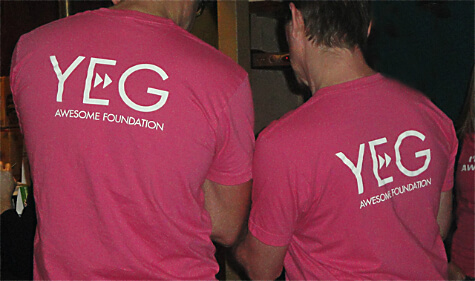 Edmonton philanthropists gather for the Edmonton Awesome Foundation’s January “pitch party.” Each month Edmontonians are encouraged to submit their “awesome” ideas that will better the community in some way. Then one Edmontonian is awarded $1,000 to go towards funding his or her “awesome” idea. No strings attached.

The concept is simple enough but what results from it could have a huge impact on the city.

Ten Edmontonians who share the same philanthropic ideals have come together to form the Edmonton Awesome Foundation.

The “awesome” trustees pool their money together to award someone with an “awesome” idea $1,000 each month.

“One of the questions we ask each of the applicants when they apply is how do you think your idea makes Edmonton better?” says Raj Dhillon, an Edmonton Awesome trustee.

“When you’re doing these kinds of pay it forward ideas, philanthropic ideas, they always focus on improving someone’s condition or someone’s community or someone’s city. We really want to focus on making the city more awesome.”

The Awesome Foundation first began in Boston and has since spread with chapters in cities worldwide.

Applicants can pitch their ideas online and each month trustees narrow down the applicants to five finalists who are invited to the monthly “Pitch Party” where a winner is chosen. 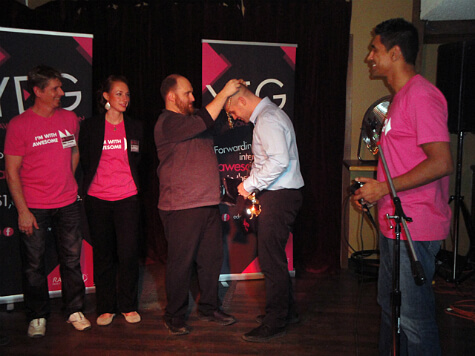 People Powered Parties are events powered by people pedalling on bikes connected to generators that create electricity for that specific event.

“We can now launch it right away.”

Coffey’s idea was chosen because the foundation believed it was innovative and could make a big, “green” impact on the city.

Previous winners’ ideas have also helped the community in some way.

November winner Jason Norman is using his $1,000 to expand on his Words with Friends project. Words with Friends brings Edmontonians together for a night centred around performances of song, poetry, comedy and storytelling. Norman and Words with Friends co-creator Kasia Gawlak will use the grant to help launch free arts-related workshops for anyone to attend and he also plans to take Words with Friends on the road to do open mic nights at different locations. 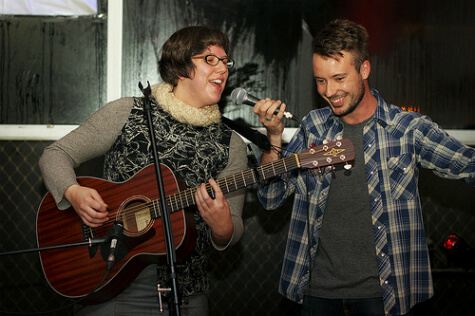 A performance at Words with Friends 3. Photo courtesy: yegwords (yegwords.wordpress.com).

“If I didn’t get the money I wouldn’t have started even the planning process that I have now,” Norman says. “I think it would have taken way, way longer.”

October winner Darcia Parada used her money to fund the 104 Underground Operascape, an opera performance inside the Bay LRT station. 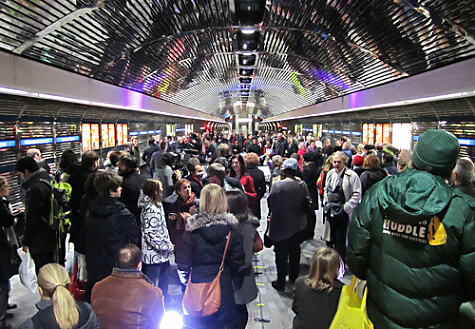 “I think the nature of the idea is what captivated them because it’s unique,” Parada says, adding that the operascape exposed Edmontonians to a different part of the city. “Some people had never even been in an LRT,” she said. “It really did liven up downtown.”

Other finalists don’t walk away empty-handed either. Often a finalist who doesn’t win the $1,000 prize still receives help or support in some way from an Awesome Foundation trustee or even just pitch party attendees who feel passionately about the idea as well.

Edmonton Awesome has received between 15-30 applicants each month since it began in September and it expects that amount to grow as word about the foundation spreads.

And it isn’t the only philanthropic organization trying to help kickstart local ideas.

Their MEÆT initiative tries to “stimulate and promote experimental, critical and imaginative ideas that may not be eligible for formal funding.”

In the end, those involved with Edmonton Awesome believe Edmontonians have plenty of great ideas just waiting to be actualized,

They just need to take that first step. 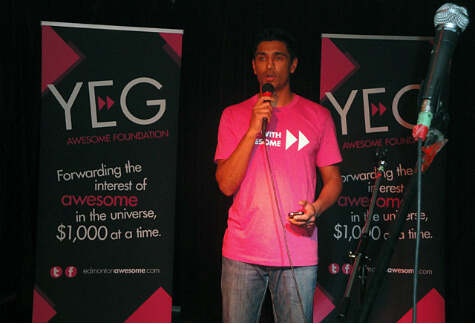 “Get off your ass,” Dhillon says with a smile.

“If you look at people like Einstein or Martin Luther King Jr., just think to yourself what would have happened if they had sat on their idea? Nothing. So get off your ass and get going.”

“Nobody’s changing the world, we’re not at that stage yet, but maybe later down the road we will be. This is going to grow, we know that much. How far it will grow remains to be determined.”

RECAP OF THE JANUARY PITCH PARTY:

Linda Hoang is a Canadian blogger based in Edmonton, Alberta, who writes about travel, food, lifestyle and pet topics. She's also a seasoned social media/digital strategist with a journalism background, the founder of the Edmonton International Cat Festival and co-founder of Stop Race Based Hate, an online anti-racism education tool. Linda loves exploring the world with her partner Mike, eating their way through cities, supporting local businesses, and photographing Instagrammable Walls. Linda is a fur-mom to two cats and two dogs.
PrevPreviousClicks of the Day: Thursday, January 26, 2012 Edition!
NextClicks of the Day: Jan. 27, 28, 29 2012 Weekend Edition!Next