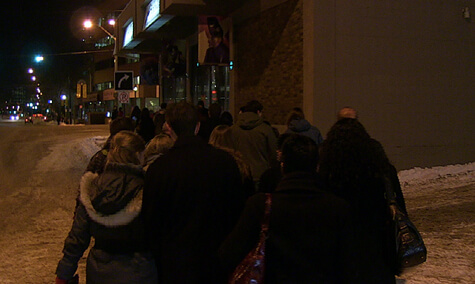 Foodies "crawling" to their next stop at Dishcrawl Edmonton: Foodie Treats on 124 Street

Edmonton’s food community takes part in Dishcrawl Edmonton: Foodie Treats on 124 Street. Edmontonians sampled dishes at four restaurants in the span of the evening. It’s just the latest in a number of food trends to hit the city.

Notes: I still don’t have proper audio or lighting equipment so I apologize for the bad audio and grainy footage, lol. Also if anyone wants to give me vocal lessons, I’ll take it! LOL

That’s the platform behind Dishcrawl, the latest food trend to hit the city and it’s being welcomed with open arms (and open mouths) by local foodies.

“The idea behind dish crawl is really to connect the food eaters to the food makers,” says Dishcrawl Edmonton organizer Teresa Lin. 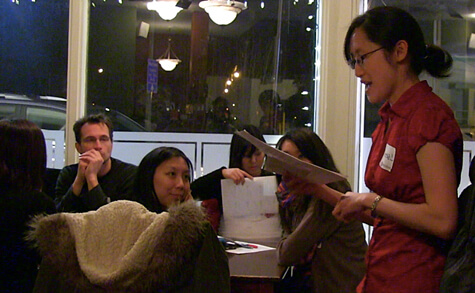 Dishcrawls are guided tours through four local restaurants during one night where participants sample dishes, learn more about the restaurant and the chefs behind the dishes, and connect with likeminded individuals.

On Feb. 28, about 30 Edmontonians gathered at The Dish & Runaway Spoon Bistro on 124 Street and Stony Plain Road for Dishcrawl Edmonton’s “Foodie Treats on 124 Street.”

The sold-out event brought foodies to Matahari followed by The Manor then ended at d’Lish Urban Kitchen and Wine Bar. All of the restaurants involved in the Dishcrawl – aside from the first – are kept a secret from crawlers as a way to enhance the entire experience.

“There’s a little bit of an element of surprise and suspense that they like,” Lin says. 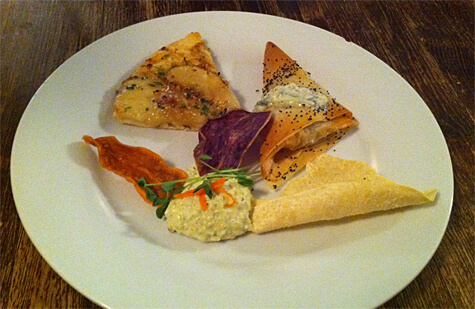 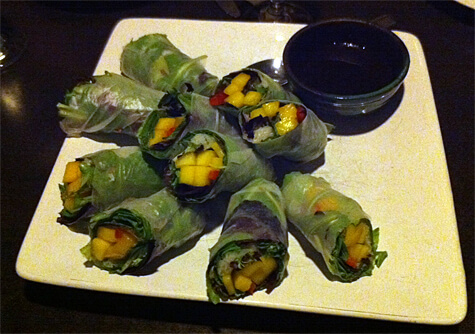 Mango in Rice Paper at Matahari at Dishcrawl Edmonton: Foodie Treats on 124 Street 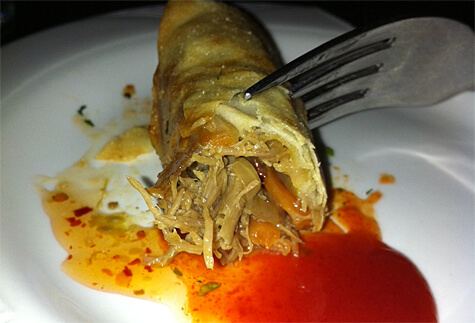 Duck Springroll at The Manor at Dishcrawl Edmonton: Foodie Treats on 124 Street 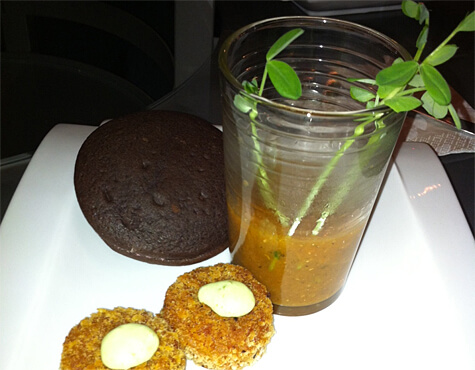 The third year nutritionist and food science student at the University of Alberta went online to see where the nearest Dishcrawl to Edmonton would be and was surprised to find there was none in western Canada at all.

She emailed Dishcrawl to ask if there would be one in the area any time soon and “one conversation led to another and (they asked) ‘is this something you’d like to be involved in’ and I was like ‘oh well, actually…'”

That’s how Lin became a Dishcrawl ‘ambassador’ bringing the trend to Edmonton.

The first crawl “A Taste of Old Strathcona” took place on Jan. 25.

“Everyone had really positive things to say about it,” Lin says. 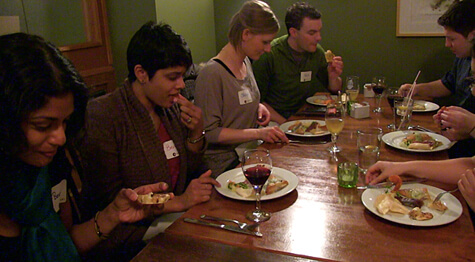 “It’s a fantastic way of enjoying food together and bonding over food which is traditionally what food is all about, that bonding time. I think in our busy, fast-paced lives that’s something that we’ve kind of lost sight of a little bit.”

And it’s that bonding over food through a number of different events that Edmontonians are certainly getting used to.

From alley burgers to food trucks to culinary cook offs and dishcrawls, there appears to be no shortage of unique events centered around the city’s foodie community.

Pop up restaurants are also quickly becoming a popular trend. 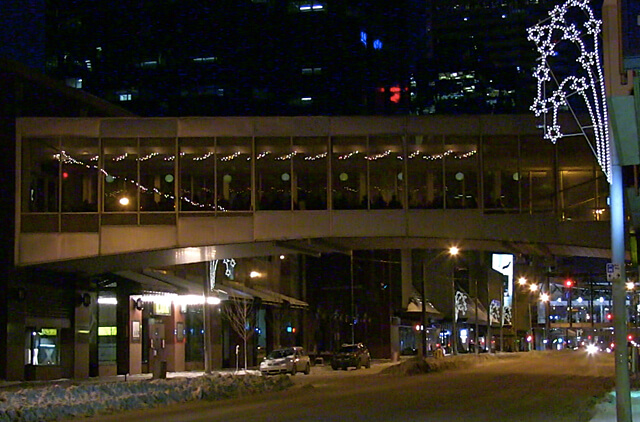 The pedway between Scotia Place and Commerce Place downtown was transformed into a 60-seat pop-up restaurant called Blink on Feb. 26. Tickets for Blink sold out in mere hours.

Blink chefs Paul Shufelt and Tony Le say it’s the experience that’s the biggest appeal for those who attend the events as well as the chefs who are involved.

“I think dining itself is not just about the food and the service, it’s about the overall experience,” Shufelt says.

“I think every chef is a little bit of an artist. It’s nice to have that opportunity to express yourself and be creative and this sort of allowed us to leave our restaurant concepts behind and focus on doing something completely different.” 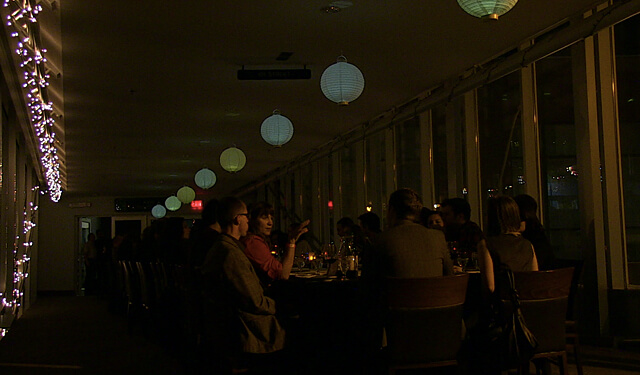 Kyla Kazeil, co-owner of The Common, says events like pop up restaurants and the Edmonton Dishcrawls are filling a void among Edmonton foodies.

“There has been a huge trend towards supporting local growers and producers,” Kazeil says.

“I love the idea of people experiencing all that this city has to offer and especially if it means supporting what’s in your own back yard.”

“What’s the passion and inspiration about the food, what’s your background, why is it that you want to share food with us,” she says.

“Being able to actually make that personalized connection (with the chefs) is definitely one of those things that Edmontonians really look forward to.” 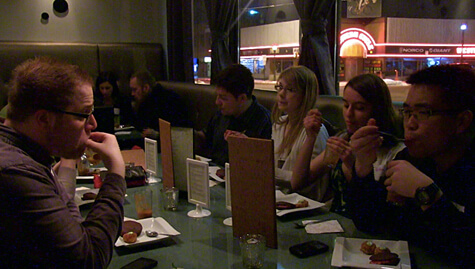 The third Dishcrawl Edmonton is set to take place the last week of April (exact date to be announced).

Ideally Lin would like to hold one every month but realistically they’ll likely be held every other month depending on schedule constraints.

With each additional crawl, Lin is certain more restaurants will be more open to coming on board, and even more foodies will try and make it out to experience the evening.

While the Edmonton foodie community is still small, it’s growing dramatically and its members are fiercely passionate.

“It’s nice to see that every time it’s become easier to sell out and easier to get people excited about (the different events),” Shufelt says.

“I’m really looking forward to whatever direction the foodie community takes over the next couple of months, next couple of years in Edmonton because it’s definitely moving at a very fast pace,” says Lin.

Linda Hoang is a Canadian blogger based in Edmonton, Alberta, who writes about travel, food lifestyle and pet topics. She's also a seasoned social media/digital strategist with a journalism background. Linda loves exploring the world with her husband Mike, eating their way through cities, supporting local businesses, and photographing Instagrammable Walls. She is the founder of the Edmonton International Cat Festival and a fur-mom to two cats and two dogs.
PrevPreviousClicks of the Day: March 1, 2, 3 2012 Weekend Edition!
NextClicks of the Day: Monday, March 5, 2012 Edition!Next