Edmonton couple hoping to resurrect Halloween Alley from the dead 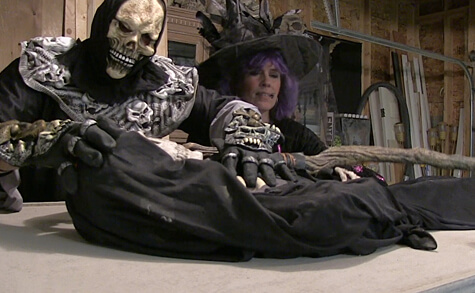 Meet Serge and Helen Leblanc, an Edmonton couple trying to resurrect “Halloween Alley” – a tradition in the city’s west-end, dating back to the 90s.

In fact, there are about a dozen skeletons, goblins and other ghastly creatures hanging in the area.

They belong to Serge and his wife Helen and will come out in a spooktactular showing on their lawn and around their home in west Edmonton come Halloween.

Serge and Helen live in the city’s Grovenor neighbourhood.

It’s a neighbourhood that in years past had been synonymous with the phrase “Halloween Alley” – an annual tradition dating back to the 90s where the streets would be closed down and families could go trick-or-treating from house to house in a spooky but safe environment.

The original Halloween Alley was located north of Stony Plain Road on 147th Street and east and west along 103 and 104th Avenue.

It began in 1990 and for 15 consecutive years, residents in Grovenor haunted and delighted visitors, all while raising food and money donations for the Edmonton Food Bank. 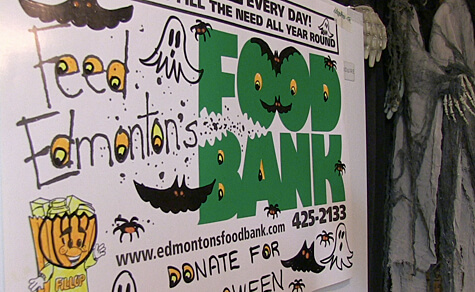 But what had been some of the scariest streets in the city has had a rocky history, being killed and resurrected time and time again due to dwindling interest, original homeowners moving out of the neighbourhood, and the fluctuating economy. 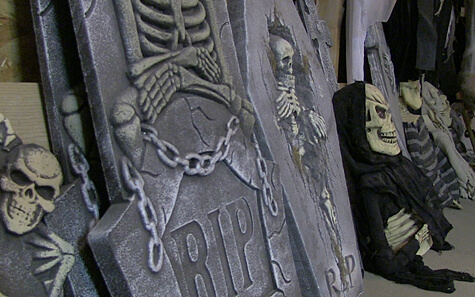 And that’s where the Leblanc’s come in.

The couple – who live at the end of the alley on 148 Street and 104th Avenue, are obsessed with the holiday and are hoping to revive the alley.

“It started with 3 houses and we’re trying to resurrect that again with about 3 houses,” Helen said.

“(We will) collect food for the food bank and at the same time we put on a show,” said Serge.

The couple have spent a small fortune stocking up on Halloween props and decorations, while Serge has spent weeks building the crypt from scratch. 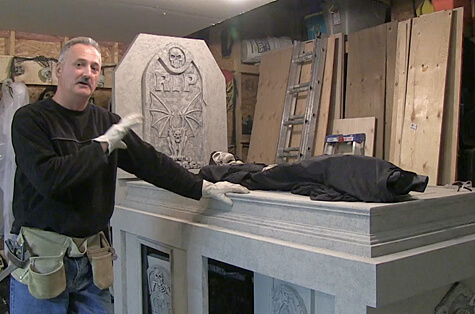 “We hope that by doing this, other homeowners will want to participate and also decorate,” Helen said.

“It doesn’t have to be extreme, it’s fun, just join in as a community.We’re trying to generate enthusiasm for a fun environment for people to come and have fun, children and adults alike.”

Their efforts are appreciated by the Food Bank, which in recent years has seen thousands of pounds of food raised from the Leblanc’s Halloween Alley event alone.

“This has been a long-standing relationship with the community,” said Kelly Cailliau, resources development co-ordinator with the Edmonton Food Bank.

“Youth are really getting behind canvassing for food at Halloween and it means a lot for us here at the Edmonton Food Bank,” Caillaiu said.

This is the third year the Leblanc’s have tried to resurrect the alley and they say with every year, they’re becoming more organized and gaining more interest from neighbours. 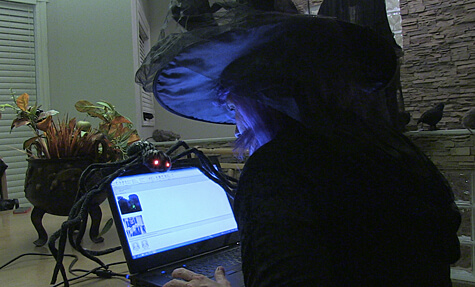 “It’s getting bigger and bigger every year,” Serge said.

The three houses participating in this year’s Halloween Alley are located along 148 Street and 104th Avenue, north of Stony Plain Road.

The Leblancs encourage Edmontonians to come out and support a long-standing city tradition, while donating food to Edmonton Food Bank boxes set up in the area.

They also encourage Grovenor-area residents and business owners to get in touch and get involved to help make next years’ event even better.

“Let’s try to join together and bring back something that an original founder started out, and I thought was a really good idea, and again it’s showing the spirit of Grovenor,” Helen said.

“Let’s have some fun and give to a great cause.”

If you’re in the Grovenor, “Halloween Alley” area and want to get involved, click here to get in touch with Serge & Helen. 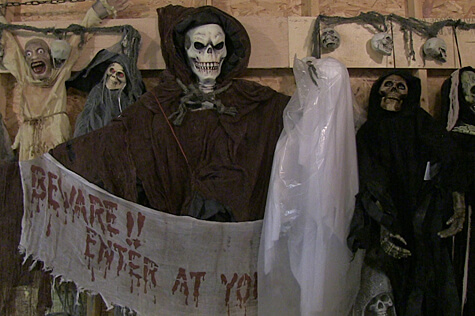 Linda Hoang is a Canadian blogger based in Edmonton, Alberta, who writes about travel, food, lifestyle and pet topics. She's also a seasoned social media/digital strategist with a journalism background, the founder of the Edmonton International Cat Festival and co-founder of Stop Race Based Hate, an online anti-racism education tool. Linda loves exploring the world with her partner Mike, eating their way through cities, supporting local businesses, and photographing Instagrammable Walls. Linda is a fur-mom to two cats and two dogs.
PrevPreviousClicks of the Day: Thursday, October 27, 2011 Edition!
NextClicks of the Day: Oct 28, 29, 30 2011 Weekend Edition!Next