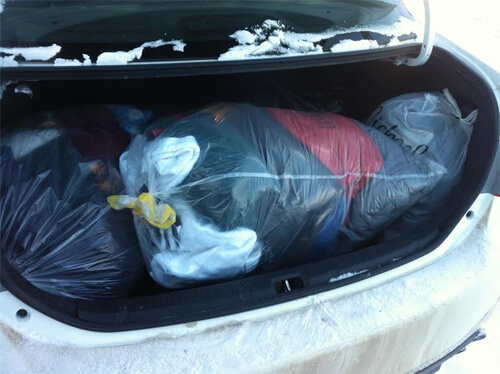 So far, 38 bags full of toques, mitts, gloves, jackets and more have been donated to #BundleupYEG to help the city’s less fortunate.

Donations for less-fortunate pour in with help of social media

Donations are pouring in after an Edmonton woman used social media as a platform to rally and inspire others to help ‘bundle up’ the city’s less fortunate.

Jasmine Franklin (@JasFranklin09) started #BundleUpYEG last Monday, after a cold snap got her thinking about the thousands of Edmontonians who are living on city streets or staying in shelters.

“It was was -41 C. I think anybody who goes outside for 10 minutes can understand… how can you even imagine living in this?” Franklin says.

Franklin had some time on her hands, and decided to use it to rally donations for local shelters. She posted on Facebook and sent out a tweet that Monday night asking if anyone had jackets, blankets, toques, mitts, scarves, and other winter gear they wanted her to pick up to give to shelters.

“By Tuesday I already had two pick-ups scheduled for the morning, so it’s just like an instant response and the next day my (Twitter) feed was just flooded,” Franklin says. “It was really amazing.”

Since last Monday, Franklin and her friend Colin Vaughan have delivered 38 bags filled with donations to various non-profits including Hope Mission, the Bissell Centre, the Mustard Seed and Boyle Street Community Services.

#BundleUpYEG started and spread through social. According to tweetreach.com, tweets that included the hashtag had an estimated reach of nearly 28,000 people, through more than 100 tweets and retweets. There was also more than 97,000 impressions (the total number of times tweets appeared on users’ timelines, including repeats/retweets).

“In 48 hours we had collected 20 bags already and that was literally from conception of the idea to putting it online. It was really amazing. Edmonton’s generosity is endless,” Franklin says. 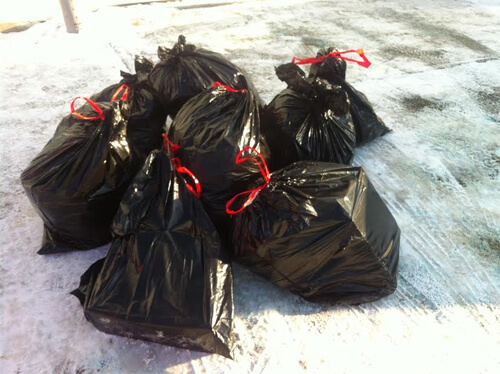 Along with arranging donation pick-ups, Edmontonians also have the option of dropping off donations to Lite 95.7‘s studio at Suite 700-5241 Calgary Trail.

It’s an important cause, and one that can get lost during the holidays.

“I know I certainly had years where I’ve had time to give and then I literally had no time.”

It takes just five to 10 minutes for exposed skin to freeze at -40 C.

When the temperature drops – especially as much as it did last week – it’s an important reminder to help the many who are constantly out in the elements.

Franklin’s schedule isn’t as open for pick-ups this week as it was last, so she’s encouraging anyone wishing to help #BundleUpYEG drop off their donations at Lite 95.7. The station will accept items until Dec. 16, when Franklin will pick up donations, sort and deliver them to shelters.

It’s a lot easier to embrace winters in Edmonton when you have a warm home to return to at the end of the day. Many don’t.

So join in on this amazing cause. Look and see if there are any gently-used items you can donate to help bundle up Edmontonians.

Meanwhile, some other local charities are in need of your help this holiday season. The Salvation Army and the Christmas Bureau say donations are down this year. Let’s come together and help ensure it’s a happy holiday for all Edmontonians.

* This is my last Social Media Spotlight until the new year. Have a happy holiday, everyone! And if you have any story ideas, feel free to tweet or email me!

Linda Hoang is a Canadian blogger based in Edmonton, Alberta, who writes about travel, food, lifestyle and pet topics. She's also a seasoned social media/digital strategist with a journalism background, the founder of the Edmonton International Cat Festival and co-founder of Stop Race Based Hate, an online anti-racism education tool. Linda loves exploring the world with her partner Mike, eating their way through cities, supporting local businesses, and photographing Instagrammable Walls. Linda is a fur-mom to two cats and two dogs.
PrevPreviousGiveaway: Tickets to the Edmonton Singing Christmas Tree!
NextAlberta Primetime: Pop Culture Panel (Dec. 12, 2013)Next