Coldest Night of the Year Walk in support of Hope Mission! (10k Walk on Feb. 23) 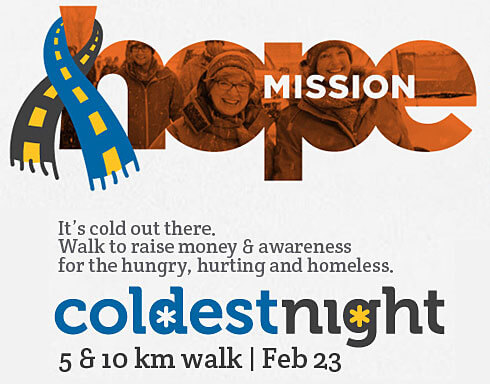 This year, for the very first time ever, I am participating in a fundraising walk! It’s been one of my goals recently to do more to help people in this city, help charities, volunteer more – and this is a good first step towards that. Now that I’m not working weekends, this whole new world of fundraising walks/runs/events on weekends have opened up! First up?

The Coldest Night of the Year walk on Feb. 23.

Thanks to Twitter (I often thank Twitter for helping connect me with great people in Edmonton) – I’ve become fairly good Twitter friends with Hope Mission’s Devin Komarnsiki. Devin reached out to me and asked if I’d like to be a part of the ‘Hope Tweet Fleet’ team for the Coldest Night walk.

Coldest Night is a big fundraiser held in cities across Canada – with money raised going to organizations that help the hungry/homeless. In Edmonton’s case – that would be Hope Mission. As I’ve never done a fundraiser before, I set my goal at $200 and thanks to family and Twitter friends, I ended up surpassing that goal on Wednesday! (Yay!) 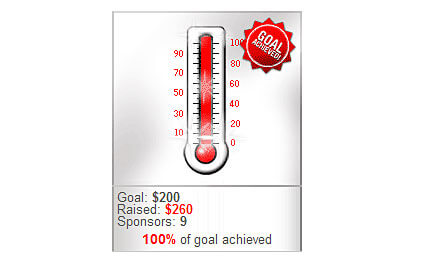 I surpassed my fundraising goal!

But just because I’ve reached my personal goal doesn’t mean the fundraising and awareness-spreading stops there. My Hope Tweet Fleet team’s overall goal is $2000 – which at this point we are only at 28% of reaching so this blog post is hopefully a way to get the word out and get more funds going towards our team and Hope Mission.

So far there are 35 teams and 163 walkers signed up for the Edmonton walk. Each city has their own overall fundraising goal and Edmonton’s is $50,000. Edmontonians have raised 47% of that goal to date and there are officially 15 days left until the walk. Can we hit $50,000? Hopefully!! I know for sure our Hope Tweet Fleet can get to $2000!

Let’s come together and help the disadvantaged in our city.

Please donate to me, to my team, or to another team in Edmonton – whatever works best for you, in the end it goes to the same cause.

You can also join the Hope Tweet Fleet yourself and raise money – then walk and tweet with me and other tweeters on Feb. 23!

Not that it’s huge incentive but future donors will also be added to this thank you list/blog post!!! :)

It’s cold out there… let’s make things a bit warmer for the hungry, homeless and hurting in Edmonton.

Linda Hoang is a Canadian blogger based in Edmonton, Alberta, who writes about travel, food, lifestyle and pet topics. She's also a seasoned social media/digital strategist with a journalism background, the founder of the Edmonton International Cat Festival and co-founder of Stop Race Based Hate, an online anti-racism education tool. Linda loves exploring the world with her partner Mike, eating their way through cities, supporting local businesses, and photographing Instagrammable Walls. Linda is a fur-mom to two cats and two dogs.
PrevPreviousSocial Media Column: Woman uses social media to talk about her sexual assault
NextReview: The CommonNext