“The homicide rate in Canada fell to its lowest level since 1966 last year, according to newly released data from Statistics Canada.”

Woo hoo! Though Edmonton is working hard to buck that trend, lol.

“Canadian BlackBerry users affected by Research In Motion’s global outage earlier this month are being asked to join in a proposed class-action lawsuit seeking refunds for the downtime.”

“When a giant Lego figurine washed up on the shore of Siesta Key Beach, some thought it was a viral marketing stunt from Legoland. ”

“A substantial number of today’s divorces may be preventable… We propose a modest reform that U.S. state legislatures can enact: the Second Chances Act, which combines a minimum, one-year waiting period for divorce with education about the option of reconciliation.”

Interesting idea. Would it work?

Lol these are amazing!

“Samsung has developed a solar-powered internet school for Africa.”

“Edmonton Oilers centre Taylor Hall apologized to fans Wednesday after someone hacked into his Twitter account and posted an offensive message.”

Lol, pretty obvious that the tweet was unlike him though.

“Older Canadians are opting to spend more of their golden years on the job, continuing an ongoing trend of delaying retirement, according to a new study.”

“After years of debate, city council approved a deal Wednesday to go ahead with a new downtown arena.”

It really has been years of debate… *head spinning*

“The federal government Wednesday reneged on its promise to contribute $92 million to construction of the Royal Alberta Museum, infuriating Edmonton’s mayor and shocking provincial officials who were forced to suspend the $340-million project.”

“Measuring rates of obesity and of diabetes markers in the blood, they saw that people who had moved to low-poverty areas had significantly lower levels of both.”

Including.. “Our understanding of dreams remains very limited.”

“Researchers from the US’s National Oceanic and Atmospheric Administration tracked the movements of five killer whales, all of which moved from the freezing Antarctic waters – average temperature 30 degrees Fahrenheit – to the relatively balmy subtropical waters off the coast of Brazil and Uruguay, where it’s 75 degrees.”

Bet you didn’t know that!

“A British man has become the world’s first ever patient to have a smartphone docking system built into his prosthetic arm.”

In the future I can see all phones being embedded into humans, lol.

And this is funny: “Trevor contacted Apple to try and get hold of a blank iPhone casing to test it out, but he said the communications giant refused to co-operate.”

“Vehicles from the area around the Fukushima Daiichi nuclear plant, which suffered a series of meltdowns after the earthquake and tsunami of March 11, were supposed to be destroyed. But unscrupulous dealers have registered them under new license plates and sold them.”

Ridiculous!!! One car emitted 300 times the legal amount of radiation? And people are going to be driving these things around?

“Nothing ruins October 31st like a bag full of “treats” that you don’t want to eat.”

Many of these are very American and I’ve never really been exposed to them but there’s definitely a few hated candies that all people can agree on – lol. We’re making sure we give only the best to kids in our neighbourhood! (Except Mike got jawbreakers and pixie sticks too, lame!)

“Child gamblers as young as five are running up debts playing marbles on the streets of North Prospect, police have warned… Police have received multiple complaints from parents saying their children owe money after placing bets.”

Oh my god this is crazy! 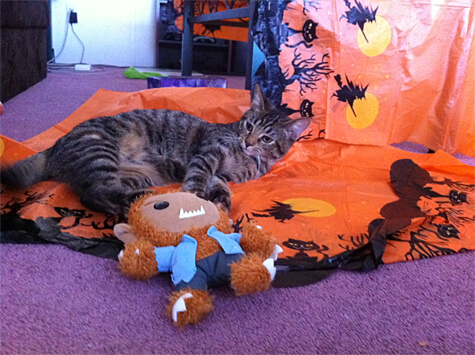 Thor getting into the Halloween mood with her new friend Wolfy.

Linda Hoang is a Canadian blogger based in Edmonton, Alberta, who writes about travel, food, lifestyle and pet topics. She's also a seasoned social media/digital strategist with a journalism background, the founder of the Edmonton International Cat Festival and co-founder of Stop Race Based Hate, an online anti-racism education tool. Linda loves exploring the world with her partner Mike, eating their way through cities, supporting local businesses, and photographing Instagrammable Walls. Linda is a fur-mom to two cats and two dogs.
PrevPreviousClicks of the Day: Tuesday, October 25, 2011 Edition!
NextClicks of the Day: Thursday, October 27, 2011 Edition!Next