Welcome to Wednesday, November 9 2011’s Clicks of the Day!

“TWENTY years from now, every family will have a pet “dinosaur” in their backyard if palaeontologist Jack Horner has his way. Dr Horner, the inspiration for Sam Neill’s character in Jurassic Park and the technical advisor on all of three movies, is working on a project that would see dinosaur and chicken genes spliced together to create a “Chickenosaurus”.”

“It’s called “Rhein II” and was photographed by Andreas Gursky, and it sold on Tuesday night for $4.3 million at Christie’s.”

Huh??! Am I missing something? Wow, what a waste of money.

“Most teens (69 per cent of those surveyed) reported that social networking sites are friendly places, where people their age are mostly kind to one another.”

“Some retailers are now staffing their warehouses with with scores of robots, produced by Boston-based Kiva Systems. The robots use a grid system to travel around the warehouses and pick up enter shelves of goods to bring to human workers for packaging, according to CNNMoney. So far Kiva’s client-list includes Staples, Amazon and The Gap.”

Oo. Yet another step closer to robots taking over the world.

“After weeks of protests in several Canadian cities, Occupy groups are being asked to leave some of the parks and public areas where they have been camping.”

Probably for the best as the cold of winter approaches.

“Alberta’s oilsands provides one of the world’s few areas of energy production growth outside the volatile Middle East and North Africa, though environmental concerns could hinder its expansion, the International Energy Agency said in a report Wednesday.”

“The Brink has been open since the end of September, and manager Carl Alderdice said that while Liverpool has a lot of cafes, there is a distinction between those and his establishment. “The difference is that we actively say we’re a dry bar.””

“The nonprofit Tawainese Industrial Technology Research Institute has invented, and begun manufacturing, a reusable paper that may actually take off. Although intended for short-lived uses and unbound publications for now, the technology creates clear text and imagery on sheets reusable as many as 260 times at very low cost.”

Good for the environment!

“The hope is that information gleaned from this small sample will provide more information about the estimated 50,000-80,000 narwhals alive today and will allow government and environmental agencies to better protect them.”

SO cool. Especially because part of me always thought narwhals weren’t actually real. To learn that there’s actually 50,000+ of them in real life? So cool. Unicorns of the ocean, lol.

“The retirement fantasies we’re peddled are a crock. Typically, they feature attractive older people who seem to spend their days in endless rounds of play, and their nights sipping champagne in their adult-lifestyle condos. Retirement living is depicted as a sort of resort vacation that goes on until you die.”

It probably isn’t like that :) I would never want to truly retire. I’d always need to be doing something – otherwise life would just get too boring. I wouldn’t necessarily need the full 8 hour – heading to the office/newsroom kind of job till the die I day but definitely keeping busy with writing, video shooting/editing, photography, blogging, other media/communications-work, in some part-time capacity (working at home, my own hours, etc.) is hopefully in my old-age future.

“You’re looking at three of the last known hirola on Earth. Since the 1970s, unregulated hunting, habitat destruction and drought linked to climate change have driven the number of these large African antelopes living in Kenya and Somalia from over 14,000 to fewer than 400…. these hirola are not only among the last of their species, they’re among the last of an entire genus.”

So sad. We are a toxic species.

“What if 70 percent of brands in the world disappeared overnight? Most people wouldn’t care, according to a new study of 50,000 people in 14 global markets performed by Havas Media, an international communications firm.”

As long as I can still get the products I want/need, then I don’t particularly care where it’s coming from.

“Chris Birch, 26, suffered a stroke during during a freak training accident when he attempted a back flip and broke his neck. But following his recovery he quit his bank job to become a hairdresser, grew to hate sport, called off his engagement and started dating a man. “I was gay when I woke up and I still am,” he said.”

“The 34 cuts, designed to save Edmonton $18.7 million, would reduce litter collection on boulevards, stop tree lighting on Jasper Avenue, Whyte Avenue and around City Hall, and chop 12,000 hours of bus service starting in March.”

“With the right music, you can set any tone you want. For example, this vicious pack of puppies attack a defenseless cat.”

Lol, so true. Music is so powerful. Cute video :) 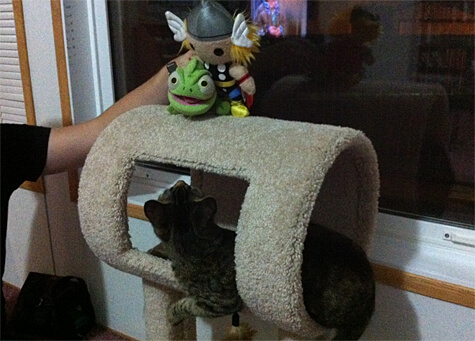 What is Pascal (Thor’s best friend) doing with the OTHER Thor?!

Linda Hoang is a Canadian blogger based in Edmonton, Alberta, who writes about travel, food lifestyle and pet topics. She's also a seasoned social media/digital strategist with a journalism background. Linda loves exploring the world with her husband Mike, eating their way through cities, supporting local businesses, and photographing Instagrammable Walls. She is the founder of the Edmonton International Cat Festival and a fur-mom to two cats and two dogs.
PrevPreviousClicks of the Day: Tuesday, November 8, 2011 Edition!
NextClicks of the Day: Thursday, November 10, 2011 Edition!Next