“New concept images and video of the proposed downtown arena were released Wednesday, but questions still remain over how the project will be paid for. The price tag has reached $532 million as a result of surrounding infrastructure including cost of land, LRT connections, and sidewalks. There’s also a $21 million community rink that is not included in the budget. The city was seeking $100 million in funding from the province, but Wednesday’s council meeting revealed that the city has yet to hold formal discussions with the province about arena funding.”

“A popular Edmonton food truck has been asked to move from its current downtown location, after complaints that it was stealing business from a nearby restaurant.”

Sad that it had to come to that! The food truck should be fine wherever it goes though, loyal customers. :)

“Resource-rich Western Canada is going from strength to greater strength, according to a new Conference Board forecast on the economy. The think-tank’s spring outlook predicts Alberta will lead the country in economic growth both this year and next with 3.8 and 3.7 per cent gains respectively. In fact, the four western provinces will claim the top four growth rates in 2012 and 2013, all bettering or equalling the average growth in the country.”

“With Ontario making the first move to reduce doctors’ fees for hundreds of services, Alberta is now saying it too wants to overhaul the way it pays its doctors. Alberta Health Minister Fred Horne says his province is looking to overhaul its physician pay formula and wants to be part of national discussions on how to rein in escalating fees… If the provinces unite on the issue, it could lead to a complete revamp of the way health care is funded in Canada – a revamp that many say is long overdue.”

“Protesters stormed into a university, many of them with their faces covered by masks, and worked through the hallways Wednesday on the hunt for classes to disrupt. The protesters were enforcing their declared strikes, and resented the fact that some students have used legal injunctions to return to school. Carrying a list of scheduled classes, about 100 hard-core protesters marched through pavilions at the Universite du Quebec a Montreal.”

Wow. Strike and protest if you must but you’d think they could respect/leave the students who want to continue learning alone…

“The Quebec government will introduce emergency legislation that would suspend the school semester for striking students in an effort to end months of violent protests over tuition increases across the province. The bill would temporarily halt the spring semester in post-secondary institutions affected by the boycotts — 14 CEGEPs (the province’s public colleges) and 11 universities.”

“The Conservative government intends to change regulations to allow animals to be killed on the farm before being processed for human consumption. The opposition New Democratic Party says this will lead to roadkill being sold to Canadians… Under current regulations animals must be alive when they are shipped from a farm to a federal facility in order for the animal to eventually be processed for human consumption. The government is proposing a change to the regulations to allow the shipment of dead animals. The government says this will only be done in limited circumstances and food safety will not be compromised. The Official Opposition says the change will result in loopholes that will have Canadians eating roadkill.”

“Luxury homes are selling in higher numbers, and at higher price points, than ever before in a number of markets across Canada, according to a new survey of the high-end real estate market. Of the 16 major Canadian markets surveyed by RE/MAX in its Upper-End Report, 13 posted an increase in high-end sales, with 10 of those markets setting records.”

“North Korea has resumed work on a light water reactor that could be used to support its nuclear programme after ”months of inactivity”, a United States institute says.”

“Researchers studying the brains of soldiers exposed to blast injuries have found evidence of a degenerative disease also detected in athletes who have suffered repeated blows to the head, raising a worrisome prospect for thousands of combat veterans. Scientists from the United States and England say brain tissue in four American military members showed signs of chronic traumatic encephalopathy, or CTE, a progressive disease normally linked to repetitive concussions.”

“Starting today, a vast portion of Google Search results will work with you to intuit what you really meant by that search entry. Type in an ambiguous query like “Kings” (which could mean royalty, a sports team or a now-cancelled TV show), and a new window will appear on the right side of your result literally asking you which entity you meant. Click on one of those options and your results will be filtered for that search entity. To understand the gravity of this change, you need to know about the fundamental changes going on behind the scenes at Google Search. As we outlined in our report earlier this year, Google is switching from simple keyword recognition to the identification of entities, nodes and relationships. In this world, “New York” is not simply the combination of two keywords that can be recognized. It’s understood by Google as a state in the U.S. surrounded by other states, the Atlantic Ocean and with a whole bunch of other, relevant attributes.”

So Google is becoming Skynet, lol.

“A new web app lets the bride and groom-to-be create a social website that connects guests with each other before the big day. Called Weduary, the web app provides a simple way of creating a modern-looking wedding website, and allows the couple to invite guests using Facebook. The site tells guests which of their Facebook friends will also be attending and points out people at the event who may have common interests and mutual friends. If a guest is attending alone, the Flirt section of the site shows other singles who will be there.”

Interesting. I already have my wedding blog but I am intrigued with this.

“The Living Planet report revealed how more than 9,000 populations of mammals, birds, reptiles and amphibians and fish are faring reveal a planet in crisis, with serious implications for human health, wealth and well-being. Freshwater creatures in the tropics have seen the worst declines, of around 70 per cent, while tropical species as a whole have seen populations tumble by 60 per cent since 1970. In Asia, tiger numbers have fallen 70 per cent in just 30 years. Industrial fishing has caused a catastrophic loss of fish such as northern bluefin tuna in the western Atlantic.”

“Ancient creatures resembling stout-necked Loch Ness Monsters apparently developed arthritis in their monster jaws, revealing that even such lethal killers could suffer from and eventually succumb to diseases of old age, researchers find. Scientists reached that conclusion while investigating the fossil of an extinct marine reptile known as a pliosaur. The carnivore was apparently an old female extending some 26 feet (8 meters). It had a 10-foot-long (3 meters), crocodilelike head, short neck, whalelike body and four powerful flippers to propel it through water to hunt down prey.”

No one / thing is invincible! Also – I love Loch Ness Monsters and Loch Ness-like Monsters… so interesting.

“A message in a bottle, posing a question about love and dropped into the sea off Indonesia, has been found more than a year later and 9,000 km away in Mozambique, on the east coast of Africa. The message’s author, Anne O’Sullivan, was travelling on a cruise ship past the central Indonesian island of Komodo when she tossed the bottle overboard. “We’re sitting in our balcony pondering. Is it better to love or be loved? Your answer will be appreciated. Call us or write to us,” the Australian teacher’s note read. Fifteen months later, she received a telephone call from a woman in KwaZulu-Natal, South Africa, telling her: “I found your bottle. It’s better to be loved. But to be loved you must love.””

What a cool story. 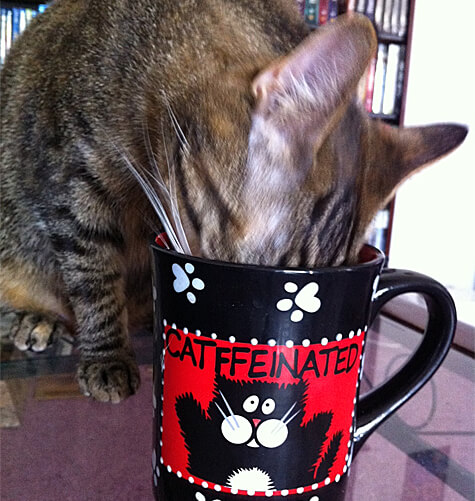 Drinking from her decat-feinated cup, lol.

Linda Hoang is a Canadian blogger based in Edmonton, Alberta, who writes about travel, food, lifestyle and pet topics. She's also a seasoned social media/digital strategist with a journalism background, the founder of the Edmonton International Cat Festival and co-founder of Stop Race Based Hate, an online anti-racism education tool. Linda loves exploring the world with her partner Mike, eating their way through cities, supporting local businesses, and photographing Instagrammable Walls. Linda is a fur-mom to two cats and two dogs.
PrevPreviousPhoto of the Day: Wednesday, May 16, 2012
NextPhoto of the Day: Thursday, May 17, 2012Next