“The final hurdle has been cleared before an Alberta election. Premier Alison Redford’s government used its majority in the legislature to pass the 2012-13 budget late Tuesday night. Redford has said she wanted to pass the spending document before sending voters to the polls. She is expected to drop the writ Monday for an April 23 polling day.”

“New calculations in Quebec’s budget this week show changes to the structure of federal health-care transfers will handsomely reward Alberta at the expense of all other provinces. Ottawa is moving toward a pure per-capita system of calculating how much each province should receive in federal health-care funding, starting in 2014. The new system means the existing equalization component in health transfers — intended to even things out among have and have-not provinces — will disappear. According to Quebec’s calculations, the change means Alberta will receive $1.1 billion extra each year, on average.”

“According to the people behind the new downtown arena, the new building could be open in just over three years. Representatives from the Katz group and the city spoke at a trade show and conference for construction and real estate managers at the Edmonton Expo Centre Wednesday morning. The presentation lasted about an hour and a half and they said the target for the arena’s opening is the summer of 2015. That is if everything goes as planned.”

That’s pretty much just around the corner! Wishful thinking?

“More restrictions are being eyed for adult massage businesses in Edmonton. Councillors are looking to move adult massage centres — also known as body rub centres —300 metres away from schools and places frequented by children. It’s the same distance liquor stores adhere to.”

I honestly thought these places were illegal? I guess not!

“Florida politicians and civil rights leaders joined calls for the firing of a police chief in the case of a neighborhood watch captain who killed an unarmed black teenager, as new details emerged on Wednesday about police handling of the investigation. ‘The reality is that people in this community have lost faith in the police chief’s ability to keep their children safe.’ Speaking in the U.S. House of Representatives, Florida congresswoman Corrine Brown criticized the police investigation of the shooter, George Zimmerman, who remains free almost a month after gunning down 17-year-old Trayvon Martin outside a gated community in Sanford, near Orlando. ‘No drug tests. No alcohol tests. No lie detector tests. It’s just his word that he felt threatened, so therefore he shot to kill. That is unacceptable.'”

This kind of stuff causes uprisings. Speaking of stuff that will cause uprisings…

“Afghanistan’s foreign minister called for a “swift and transparent investigation” into the killings of 16 men, women and children Wednesday as the U.S. soldier arrested in the massacre awaited charges. On Wednesday, Staff Sgt. Robert Bales’ attorney John Henry Browne said he’s now hearing that homicide and other charges against his client might be filed Friday. And after a meeting in Washington with Secretary of State Hillary Clinton, Afghan Foreign Minister Zalmai Rassoul said his government was looking forward to seeing justice done.”

Wonder what will happen to Bale.

“New and bigger warning labels about the dangers of smoking, covering three-quarters of cigarette packages, became mandatory Wednesday. ‘This milestone date represents an important step towards the full implementation of the new health-related labels for cigarettes and little cigars,’ Health Minister Leona Aglukkaq said in a statement.”

“Although many assume it’s simply genes, a hereditary trait men can blame on their ancestors, a new study published in the Journal of Clinical Investigation, has found that stem cells and their relation to proteins play a surprising role in explaining what happens in a balding scalp. The new insights could lead to cell-based treatments for male-pattern balding that would involve isolating individual stem cells, expanding them, then adding the enlarged cells back into the scalp.”

If we go bald we should just embrace it!

#practicingsafesex. And speaking of that…

“A Massachusetts school has taken its first step toward giving students as young as 12 free access to condoms at school. The Springfield School Committee voted 5-1 Thursday in favor of the “Comprehensive Reproductive Health Policy,” which aims to promote safe sex, prevent sexually transmitted diseases and teen pregnancy.”

“Chemicals found in everyday items including mobile phone covers, toys, tin cans and shampoos could be fuelling the rise in obesity and diabetes, according to a new study.Some of the hormones affected by the chemicals help to control appetite, leading Dr Tim Lobstein, of the International Association for the Study of Obesity, to say ‘People trying to lose weight will be undermined by these chemicals which they cannot see, cannot taste and do not know how to avoid. This alarming report highlights the need for government action.'”

“Americans may be more at risk for a parasitic infection known as Chagas disease than thought, indicates a study that found a surprisingly high number of so-called kissing bugs had fed on human blood. Triatomine bugs earned their nickname by biting people on the face to suck blood at night, and the bugs can carry a parasite called Trypanosoma cruzi, which causes the potentially life-threatening Chagas. By examining 13 bugs collected in Arizona and California, a team of researchers found that five of the insects were infected with the parasite, and — more surprisingly — five of the 13 had fed on human blood.”

“It doesn’t turn back the passing of time, but a simple blood test could make it easier for women to decide if it’s the right time to have a baby. Doctors have developed a new blood test called AMH that can measure a woman’s fertility, a significant marker for women contemplating starting a family.”

“Match.com, eHarmony and Spark Networks agreed Tuesday to screen their prospective online dating clients for histories of sexual assault, violence and identify theft, California Atty. Gen.Kamala D. Harris announced. The agreement stemmed from a lawsuit brought last year by a Match.com client who was raped on a date with a repeat sex offender to whom she had been matched by the dating service.”

“On March 21, 2006, creator Jack Dorsey sent out the first tweet, an appropriately self-focused declaration of boring information: “just setting up my twttr.” It was the modest beginnings of what has become quite the powerful little bird—one given credit for fomenting revolution in Iran and the Arab world, bringing down certain popular American politicians, and spreading nude celebrity photos …140 characters at a time.”

“Although the current version requires tanks of hydrogen and oxygen to provide the fuel, the researchers hope the robot, called “Robojelly,” may one day be able to fuel itself by gathering hydrogen and oxygen from its surroundings or a regenerating source, allowing it to run indefinitely… What’s the use of a self-propelling, self-fueling, jellyfish-looking robot? Well, funding for the work comes from the Navy, and one of the authors writes on his website that he’s working on ‘unmanned underwater vehicles … which will be used for surveillance purposes.'”

Not only will land robots take over our world but now underwater robots will too, lol.

“Besides being good for things like catching bugs, scientists have just discovered that spider webs have some unique properties that would make them very helpful in electronics.”

As long as there’s no real spiders!

“Hipstamatic is set to unveil a partnership with Instagram that allows photos taken on the camera app, which enables users to snap professional-looking pictures with stylized films and vintage-era lenses, to be ported directly into Instagram’s network with just one click. It represents the first time Instagram has opened up this platform API to third parties, and marks a move toward letting photos freely flow into Instagram’s network from outside sources.”

Hipstamatic and Instagram are my two fav. photo apps on my iPhone! Great partnership.

Renovating is so much work though… and so costly, lol.

“According to a report by Dallas-based marketing firm Epsilon, Canadians are more plugged into the so-called group deal or deal of the day website trend than Americans, and are willing to live with a flood of promotional emails in exchange for cut-rate deals.”

“Scientists have long worried about the health implications of oil entering the food chain and the long-term health concerns such a scenario would raise. Now their fears have been confirmed as a study published by Geophysical Research Letters… confirms that oil has indeed entered the ocean’s food chain through zooplankton.”

Sigh. Mankind’s slogan should be destroyer of all things on Earth, lol.

“A brand-new species of leaf-nosed bat has been identified in Vietnam, on the basis of its genetic differences as well as its sonar frequency. The findings, reported in the Journal of Mammalogy, suggest that different bat species living in the same habitat keep to their own in part due to the echolocating sounds they emit.”

“For over 100 years, we’ve used steel and concrete to reach higher and higher into the sky. They took us all the way from the 13 stories of the Tacoma building in 1893 to the 211 stories in the Burj Khalifa today. But neither material is particularly environmentally friendly. And that’s a big problem when you realize that 70% of the world’s population could be urban by 2050. Architect Michael Green has an idea, an old idea. He wants to build a new generation of high-rises out of wood. And he’s working on multiple projects, including a 30-story building for Vancouver, that would see this happen.”

“Jayden feels guilty about the mess he’s made, so he sends himself to his room, and closes the door behind himself.”

“On his last day at an unnamed lion park, an employee gets a goodbye group hug from the pride’s youngest members.” 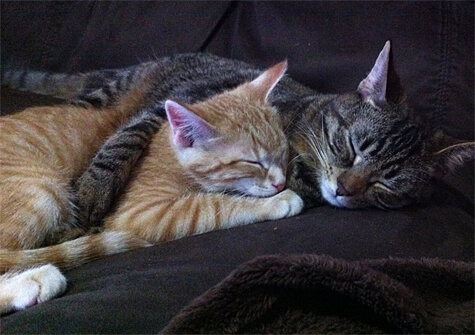 :) Your daily dose of adorable!!

Linda Hoang is a Canadian blogger based in Edmonton, Alberta, who writes about travel, food lifestyle and pet topics. She's also a seasoned social media/digital strategist with a journalism background. Linda loves exploring the world with her husband Mike, eating their way through cities, supporting local businesses, and photographing Instagrammable Walls. She is the founder of the Edmonton International Cat Festival and a fur-mom to two cats and two dogs.
PrevPreviousClicks of the Day: Tuesday, March 20, 2012 Edition!
NextReview: Sushi GardenNext