“Montreal police said Wednesday they believe that a hand and foot mailed to two Vancouver schools are linked to the killing and dismemberment of a Chinese student in Montreal. Cmdr. Ian Lafreniere said Wednesday that the packages were mailed from Montreal via Canada Post, and investigators from that city are now taking over the investigation launched in B.C. The packages also contained notes, police said, but they wouldn’t elaborate further.”

“The grief-stricken family of dismemberment victim Jun Lin has made an emotional journey to Montreal, where the 33-year-old Chinese student was gruesomely murdered. Lin’s mother struggled to speak and could barely walk, according to one of the few people to have met with the family. Yan Shi, the head of the Chinese student association at Concordia University, where Lin studied engineering, told The Canadian Press that Lin’s mother was ‘very emotional.'”

I can’t imagine what they are going through… Also:

“Internet cafe owner Kadir Anlayisli was hailed as a hero for pointing out Luka Magnotta to police, and now he figures it’s time to cash in while he has the chance. Anlayisli refused to grant an interview to QMI Agency unless he was paid in cash, and he says he’s trying to sell his story to the highest bidder.”

Whatever you gotta to make money I ‘spose…

“The federal government is establishing a law enforcement team dedicated to preventing human traffickers from operating in Canada… The action plan will also increase training for frontline workers to identify and respond to suspected human trafficking as well as provide support to victims.”

“An elderly man found guilty of manslaughter in the 2006 death of his wife will serve his two-year prison term at home. In court Wednesday, a judge sentenced 83-year-old Noel Lavery to a prison term of two years less one day, satisfied Lavery is not a danger to the community, the judge is allowing the senior to serve his term at home.”

“Edmonton police are warning the public about the dangerous side effects related to taking a drug known as ‘bath salts’ – a blend of chemicals that are making their way into Canada. “As far as drugs go, it’s really scary,” EPS Detective Guy Pilon said Wednesday.”

It’s sad that people even have to be warned not to use these drugs. Smarten up.

“Unravelling complex webs of terrorist activity is a never ending job for police agencies across the globe — and Alberta is no exception. With a growing population, a strong economy and critical infrastructure encompassing the province’s natural resources, Mounties say Alberta is an attractive place for terrorists, which is why they are in the process of putting together an Integrated National Security Enforcement Team (INSET) as part of an expansion of the RCMP’s national anti-terrorism network.”

Hope they catch the bad guys!

“Pro-government militiamen and security forces killed at least 78 people, including children, in Syria’s central province of Hama on Wednesday, activists said… The killings came less than two weeks after a massacre in the town of Houla, in which security forces and pro-Assad militia men known as “Shabiha” killed 108 people, nearly half of them children.”

How many more will die?! Ugh!

“Cases of gonorrhea that resist the last remaining antibiotic treatments for the the sexually transmitted disease have been detected in Australia, France, Japan, Norway, Sweden and Britain, officials at the World Health Organization said Wednesday. Sounding an alarm about the immense risks now posed by this once easily curable bug, the Geneva-based public health body announced a global action plan to control its spread and effect. The plan will focus on development of new treatments and on monitoring for incorrect use of antimicrobial agents.”

“A new study says that most of us – 85 per cent of Canadians – are inactive. And it’s costing the health-care system dearly. In total, our inactivity cost $6.8-billion a year in 2009, according to an analysis by Ian Janssen, Canada Research Chair in physical activity and obesity at Queen’s University. That figure includes $2.4-billion in direct costs, which includes providing care to patients and $4.3-billion in indirect costs, which can include workplace absenteeism and long-term disability.”

“Some surprising new research has demonstrated that a natural ingredient found in milk can protect against obesity. This could lead to a new design of ‘diet pill.'”

“If you want to quit smoking eat more fruits and veggies, a new U.S. study says. Researchers said smokers who added extra fruits and vegetables to their diet puffed fewer cigarettes per day, waited longer to smoke their first cigarette of the day, and scored lower on a common test of nicotine dependence.”

How can you go wrong with fruits and veggies?

“Social networking website LinkedIn has said some of its members’ passwords have been “compromised” after reports that over six million’ passwords had been leaked onto the internet.”

“Twitter CEO Dick Costolo said that mobile usage and revenue are outpacing the desktop web version, and that he doesn’t concern himself about an IPO.”

“It’s unlikely that E3 2012 will go down as one of the more newsworthy installments of this annual trade show. But, while we may lack blockbuster news (or many must-play games), there are several trends on display that paint a clear picture about what kinds of games and interactive entertainment experiences are coming over the next several years.”

Including “Mobile and social gaming deserve a seat at the table” (duh).

“If you’re planning your wedding on Pinterest, chances are that you’ve already created a board (either intentionally or unintentionally) with all of your registry wishlist items. Adorable teacups? Check. Awesome piece of artwork? Yep. But there’s only one problem — how to share those items with all of your guests? This week online gift registry service MyRegistry.com — which allows couples to add items from any store onto one universal gift list — launched a browser extension that lets users easily add any pin on Pinterest to a universal gift registry on its platform. MyRegistry.com members can also transfer complete pinboards onto their gift registries using the company’s new Pinterest import tool.”

Was just a matter of time, eh?

“Canadian Business has collected data on more than 600 jobs tracked by Statistics Canada to determine which ones offer the best and worst employment opportunities. The following 10 jobs have the worst combination of low wages and employment growth over the past five years.”

Including jewellers, fish processors actors and more! (Surprised news reporter/producers aren’t on that list, it so often makes it onto ‘worst job’ kind of lists.

“Employees not only want to use their preferred smartphone on the job, they are starting to use their computer of choice, a trend called bring-your-own-device to work, which often favours Apple devices. Company-issued PCs and mobile phones are being challenged by some employees who argue they work more efficiently on their own devices, say experts.”

“Could human activity push Earth’s biological systems to a planet-wide tipping point, causing changes as radical as the Ice Age’s end — but with less pleasant results, and with billions of people along for a bumpy ride? It’s by no means a settled scientific proposition, but many researchers say it’s worth considering — and not just as an apocalyptic warning or far-fetched speculation, but as a legitimate question raised by emerging science.”

Obviously. We are the worst thing to happen to this planet. (Too extreme?)

“Bieber fever is more infectious than measles, capable of spreading effortlessly to children in far flung parts of the globe, a new study suggests. The work, by researchers who use formulas to predict the spread of diseases, suggests Bieber fever may be the most contagious disease of our time, able to infect and re-infect a generation of children. And mathematical models predict it may not abate any time soon.”

Lol… (was debating putting this in ‘Health’ section but it’s just so silly.

“There have been a lot of human eating stories in the news recently, and thankfully, Andy Samberg has taken notice.”

“An Iowa farmer found woolly mammoth fossils in his backyard in Oskaloosa. According to experts, the farmer may have an entire skeleton of a mammoth that died 14,000 years ago. He insists he is keeping his fossil treasure in his living room. The farmer who gave his name as John, said he plans to keep the fossils for himself. His living room is stacked full of mammoth vertebrae, ribs and a gigantic five-foot femur.”

“Or, how a tiny shift in perspective can dramatically change your outlook in life.” 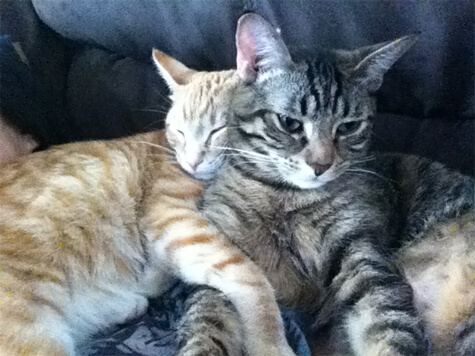 My lovely cats napped with me today.

Linda Hoang is a Canadian blogger based in Edmonton, Alberta, who writes about travel, food, lifestyle and pet topics. She's also a seasoned social media/digital strategist with a journalism background, the founder of the Edmonton International Cat Festival and co-founder of Stop Race Based Hate, an online anti-racism education tool. Linda loves exploring the world with her partner Mike, eating their way through cities, supporting local businesses, and photographing Instagrammable Walls. Linda is a fur-mom to two cats and two dogs.
PrevPreviousPhoto of the Day: Tuesday, June 5, 2012
NextPhoto of the Day: Wednesday, June 6, 2012Next