Since I missed out on Tuesday’s Clicks of the Day please don’t mind my belatedly linking this first:

“Don’t get me wrong. I’ll try to be physically present at as many events as I can, but it’s nice to know when I can’t make it out, I won’t miss out. Although you may not get the full experience by following along online, thanks to Twitter I’ve been able to “attend” many events, all while seated in front of the computer.”

“Numerous charges have been laid against an Edmonton couple related to the alleged abuse of their twin toddlers, although both children remain in hospital – the Homicide Section is investigating. Police said paramedics were called to the couple’s home on Friday, May 25 – EMS arrived on scene to find one of the two-year-old girls in cardiac arrest, and the other suffering from numerous injuries… On Tuesday, following consultation with the Crown, police arrested and charged both parents with two counts each of aggravated assault, criminal negligence causing bodily harm, failing to provide the necessities of life.”

“The province is less than three weeks away from putting into effect tougher penalties for impaired drivers. Longer licence suspensions and vehicle seizures will come into force July 1 for anyone with blood-alcohol of .08 and above, which is a Criminal Code offence. Tougher provisions for motorists who blow between .05 and .08 on a breathalyser will start Sept. 1.”

So don’t drink and drive, basically.

“Fraud allegations has a labour advocate calling on the federal government to scrap the temporary foreign workers program. A Calgary woman is accused of defrauding a woman from Japan of more than $2 million.. At the time of the alleged crimes, Melissa Holman, 40, was president of the Temporary Foreign Workers Association, which says its aim is to prevent such abuses.”

To be in that position of trust and to do that…

“Edmontonians are being reminded about the dangers of leaving pets in vehicles as the city enters warmer summer months. Firefighters were called to the parking lot at the Valley Zoo Tuesday where they found a dog locked inside a vehicle… Officials say the dog will be fine, but the incident serves as a reminder to others about how quickly animals in cars become distressed on a warm day.”

Why do people bring their dogs with them on errands or day trips?!?!? Come on…

“Bob Rae announced Wednesday he will not run for the permanent leadership of the Liberal Party, saying the decision is a political one rather than a personal one. He told reporters in Ottawa he would continue as interim leader until next spring when the party chooses a new permanent leader.”

“One, a foster child, said he was threatened, warned he would never see his family again if he ever told anyone what happened. Another said he stayed quiet because he didn’t want to stop getting tickets to the hottest game in town — Penn State football. That was how two of Jerry Sandusky’s accusers explained the former Penn State assistant coach’s hold over them.”

The details that are coming out of this trial…

“The bruised nations of the euro zone are plunging into several trying days that will test whether an increasingly fragile monetary union can withstand further blows. The 17-member group heads into this next round in its deepening crisis having suffered almost daily hits. Wednesday alone, Moody’s Investor Services cut Spain’s credit rating, Italy was forced to pay sharply higher rates at a debt auction, and even Germany, deemed the safe haven of the crisis, found bond investors cautious.”

“A recent investigation by the CBC into privately owned ultrasound clinics in Canadian cities found that almost three quarters of the twenty-two so-called “entertainment ultrasound” businesses visited in the undercover operation said they were willing to do a scan solely to determine the sex of an unborn child, some as early as 14 weeks gestation. The release coincides with the release of several undercover videos in the United States by the group Live Action showing employees at Planned Parenthood and other abortion clinics offer to help women obtain sex-selective abortions.”

“Exhaust fumes from diesel engines do cause cancer, a panel of experts working for the World Health Organization says. It concluded that the exhausts were definitely a cause of lung cancer and may also cause tumours in the bladder. It based the findings on research in high-risk workers such as miners, railway workers and truck drivers.”

“Men hoping to become dads have long been advised to stick to a healthy lifestyle to keep their sperm healthy. But a new study suggests that drinking, smoking or being fat may make little difference to how many swimming sperm men produce… The factors that did affect the numbers, though, were: having had testicular surgery, black ethnicity (though the number of black men in the study was small), doing manual work that might expose them to chemicals, wearing briefs or no underwear instead of boxer shorts, not having had a previous conception.”

“Researchers have shown that a cold virus known to destroy cancer cells can be delivered to a tumour through the bloodstream without falling prey to killer antibodies on the way… The reovirus holds promise as a possible new way of treating cancer because it not only kill cancer cells directly, but also triggers an immune response — similar to what a vaccine does — that helps eliminate residual cancer cells.”

“Those who throw down more than two grand for a new MacBook Pro with Retina Display will have a hell of a time trying to fix their notebook should anything go amiss. iFixit’s latest teardown reveals the newest member of the MacBook Pro line is the “least-repairable laptop” the team has ever had to tear apart.”

Including a better Siri, expanded FaceTime, some new apps and more. But this is what I actually care about:

“Sure, there’s a new, thin MacBook some are calling MacBook “Pr-Air.” And, yeah, we got a peek at OS X Mountain Lion and iOS 6. There was some stuff to cheer. But there also was a lot not there. There was no “one last thing.” No Apple TV. No other Mac updates. No iPhone 5. This is beginning to sound a bit like an Amy Winehouse song.”

“Social networking website LinkedIn Corp said it will provide an additional layer of online security to its members following last week’s data breach, while adding that stolen passwords were not published with corresponding email logins. Some cyber security experts had earlier said LinkedIn did not have adequate protections in place, and warned that the company could uncover further data-losses over coming days as it tries to find out what happened.”

A bit too late but thanks, LinkedIn.

“Wondering what Microsoft had in mind for Skype when it bought the company in May of last year for $8.5 billion? Apparently, the answer is ads. Yes, today Skype announced “Conversation Ads.” Well, Skype doesn’t want you to think of them ads, but rather as icebreakers: While on a 1:1 audio call, users will see content that could spark additional topics of conversation that are relevant to Skype users and highlight unique and local brand experiences. So, you should think of Conversation Ads as a way for Skype to generate fun interactivity between your circle of friends and family and the brands you care about.”

“Proposals for Internet addresses ending in “.pizza,” “.space” and “.auto” are among the nearly 2,000 submitted as part of the largest expansion in the online address system. Apple Inc., Sony Corp. and American Express Co. are among companies that are seeking names with their brands.”

“Old high school classmates aren’t the only ones making connections on Facebook. The crooks are too… People are used to con artists pitching them via email. Who hasn’t received a sketchy alert that they’ve won an African lottery, inherited millions from a long-lost relative in Eastern Europe or had a security breach of their bank account? But Facebook, with its network of “friends,” has a way of making people let their guard down.”

Always be careful. Don’t be stupid.

“The U.S. Coast Guard is offering a $3,000 reward for information leading to the prosecution of a hoaxer who claimed there was a yacht explosion off the New Jersey coast Monday… News organizations reported on the alleged explosion — with possible deaths — for several hours.”

“Despite the onslaught of politicians attempting to project an air of question around man-made climate change, studies continue to emerge proving the connection between human actions and our changing environment. The most recent study, published in Nature Climate Change, finds an “anthropogenic fingerprint” (human influence) on our warming oceans.”

Of course the study finds that. We are a poison on this planet!

“Actor Rob Lowe has raised the ire of Winnipeggers with a tweet that appears to refer to the Manitoba city as a “hell hole.” Lowe is in Winnipeg shooting a movie about Casey Anthony. Late Tuesday night the actor posted a tweet while apparently watching the first game in the NBA series final between Oklahoma Thunder and Miami Heat. Lowe tweeted: “The local affiliate is interrupting the 4th quarter of the #NBAFinals to show city council election results!!! #TrappedInAHellHole” The response on Twitter was predictably harsh from residents of Winnipeg, which goes by the slogan “One Great City.””

“He turned up in Berlin nearly a year ago claiming he had been living deep inside the German forest with his father for five years. Blond and blue–eyed, the English-speaking teen known only as Ray told Berlin police that his parents were now dead and that hadn’t a clue as to his own identity. 90-“There is no one to appeal to; all my family are dead,” he told the legal guardian appointed to him, according to Berlin police, who say he’s refusing to make any public appeals to find any relatives. Now, after lengthy investigations by German police and the international police organization Interpol, Berlin investigators have released a photograph of the mystery boy in the hope that someone would come forward to finally help authorities discovering his identity.”

“Eating in Vancouver can be expensive, but Nader Hatami has set a new standard with $450 pizza… he $450 pizza, dubbed C6, features thermidor of lobster and black Alaska cod, with a side of Russian Osetra caviar.”

“Burger King announced that it will be offering a bacon sundae throughout the U.S. this summer. The dessert — a 510 calorie monstrosity featuring both a whole strip of bacon and bacon crumbles atop a fudge and caramel sundae — was released in April in Nashville to reasonable fanfare, but will now receive a wide release as part of Burger King’s expanded summer menu.”

“A litter of Ragdoll kittens get to meet the family’s German Shepherd Mari.”

So cute!!! Narration is wonderful as well.

“A litter of kittens get a bath after coming home from the animal shelter.”

“Helga refines her technique on a compliant client.” 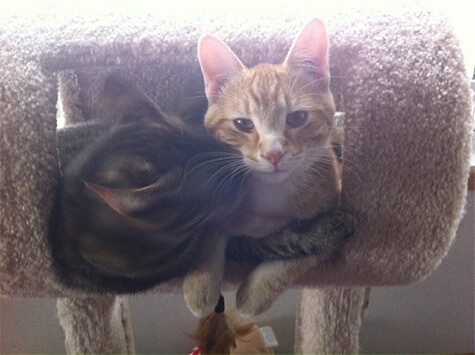 Loki getting licks from Thor. :)

Linda Hoang is a Canadian blogger based in Edmonton, Alberta, who writes about travel, food lifestyle and pet topics. She's also a seasoned social media/digital strategist with a journalism background. Linda loves exploring the world with her husband Mike, eating their way through cities, supporting local businesses, and photographing Instagrammable Walls. She is the founder of the Edmonton International Cat Festival and a fur-mom to two cats and two dogs.
PrevPreviousPhoto of the Day: Tuesday, June 12, 2012
NextPhoto of the Day: Wednesday, June 13, 2012Next