“As the provincial election battle intensifies between the two parties on the political right, people who might have been considering voting for one of the left-leaning parties could resort to strategic voting. “Strategic voting is all about preventing your least favourite candidate from winning,” explains Grant MacEwan University political scientist Chaldeans Mensah. It’s a trend that’s becoming more prominent as April 23rd nears. Numerous signs and websites have been popping up around the province encouraging people to vote strategically, given how close the Wildrose and Progressive Conservative parties have been polling.”

Will you be voting for someone you believe in or voting to prevent your least favourite candidate from winning?

“The mayors of Alberta’s two major cities have waded into the provincial election campaign, saying the remarks of some candidates hurt the image of their cities. In particular, they focused on Allan Hunsperger and Ron Leech, two pastors running for the Wildrose in Edmonton and Calgary, respectively. Calgary’s Naheed Nenshi (who has repeatedly said he hasn’t endorsed a party) said Mr. Leech’s post-gaffe explanation – that he meant to say he wasn’t at a disadvantage because he’s white – didn’t address whether he believes, as he originally implied, that non-white candidates only represent non-white voters. Mr. Nenshi happens to live in the riding. Edmonton Mayor Stephen Mandel publicly questioned why Ms. Smith didn’t refute Mr. Hunsperger, saying homophobia isn’t welcome in his city. “We’re accepting and open and welcome everybody. We don’t want people to think that this is a place that people are not welcome,” Mr. Mandel told a local radio station.”

When the mayors get involved you know it’s quite the election.

“A new revelation of young American soldiers caught on camera while defiling insurgents’ remains in Afghanistan has intensified questions within the military community about whether fundamental discipline is breaking down given the nature and length of the war. The photographs, published by The Los Angeles Times on Wednesday, show more than a dozen soldiers of the 82nd Airborne Division’s Fourth Brigade Combat Team, along with some Afghan security forces, posing with the severed hands and legs of Taliban attackers in Zabul Province in 2010. ”

“Currently, the local alert level remains at a Yellow Level 3 alert. International Business Times reported this means “they expect explosive activity of an intermediate to high scale.” The next stage of alert would be a red alert, which would likely prompt evacuations.”

Hope everyone is okay.

“They are the people who inspire us, entertain us, challenge us and change our world. Meet the breakouts, pioneers, moguls, leaders and icons who make up this year’s TIME 100.”

“American scientists say a new nanotechnology-based technique that can target hard-to-reach parts of the brain could be used to treat cerebral palsy. The treatment helped rabbits born with the condition regain mobility, marking a breakthrough in cerebral palsy research and providing patients with a hope that treatment may be available after birth.”

Cool. Also cool – the rabbits were born with the condition and scientists didn’t just make them have it for the sake of research.

“Researchers have found a way to classify breast cancer tumors into 10 distinct categories ranging from very treatable to extremely aggressive, a major step on the way to the long-sought goal of precisely targeting therapies for patients. The new categories, described in a study released Wednesday, should help scientists devise fresh approaches to treat some of the cancers and could spare many women the risks and pain of unnecessarily toxic treatments, oncologists said.”

“Helene Campbell celebrated her 21st birthday at Toronto General Hospital on Wednesday, less than two weeks after she and her family had conceded to themselves that reaching such a milestone was extremely unlikely.”

“One of the researchers involved in the controversy over whether to publish research on mutant versions of H5N1 bird flu, has said he plans to submit his paper to Science without applying for an export control license as demanded by the Dutch government.”

Why does he want to get this published…

“Students who take water into the examination hall may improve their grades, a study of 447 people found. Controlling for ability from previous coursework results, researchers found those with water scored an average of 5% higher than those without.”

“Facebook shocked the tech community with its $1 billion acquisition of Instagram, but perhaps more shocking is the price the photo-sharing app’s CEO originally wanted for his company: US$2 billion. During three days of quiet negotiations, Facebook CEO Mark Zuckerberg halved Kevin Systrom’s asking price–all without involving bankers or his own board of directors, according to a report in The Wall Street Journal.”

Intense. I didn’t think those kinds of huge company decisions could really be made without discussing with a board lol.

“Austrian police have arrested a 15-year-old student suspected of hacking into 259 companies across the span of three months. Authorities allege the suspect scanned the Internet for vulnerabilities and bugs in websites and databases that he could then exploit. As soon as he was questioned, the young boy confessed to the attacks, according to Austria’s Federal Criminal Police Office. The boy allegedly stole data and published it publicly after breaching the security infrastructures of 259 firms. He also defaced many company websites and boasted about his accomplishments on Twitter, where he also posted links to his data dumps.”

If he can do this at the young age of 15… bet you he’s going to be recruited by some government agency for future work (once he is out of jail).

“After a brief hiatus, the long-standing rumor that Apple will employ more metal in the iPhone, has made a return — and even taken a new twist.
Citing unnamed industry sources, Korean news site ETnews says Apple will use Liquidmetal technology for the next iPhone, which the outlet boldly claims will be unveiled at Apple’s annual worldwide developers conference.”

It will look slick I’m sure.

“They can’t buy a house, visit their families in Ohio as often as they would like or spend money on dates. Plans to marry or have children are on hold… High school’s Class of 2012 is getting ready for college, with students in their late teens and early 20s facing one of the biggest financial decisions they will ever make. Total U.S. student-loan debt outstanding topped $1 trillion last year, according to the federal Consumer Financial Protection Bureau, and it continues to rise as current students borrow more and past students fall behind on payments. Moody’s Investors Service says borrowers with private student loans are defaulting or falling behind on payments at twice prerecession rates.”

“The fact that land-bound dinosaurs laid eggs is what sealed their fate of mass extinction millions of years ago while mammals giving live births went on to thrive, scientists said on Wednesday. In a new explanation for mammals’ evolutionary victory over dinosaurs, researchers said a mathematical model has shown that infant size was the clincher. Given physical limitations to egg size, dinosaurs had comparatively small young. Some came out of the egg weighing as little as two to 10kg, yet had to bulk up to a hefty 30 or 50 tonnes.”

“Global warming, pollution and human activity in marine habitats are not generally regarded as good things — unless you’re a jellyfish. Then — according to a study of the jellyfish population by University of B.C. researchers — they have an upside. Jellyfish, which give many swimmers the creeps, are increasing in the majority of the world’s coastal ecosystems, UBC researchers have found in what is being billed as the first global study of the abundance of jellyfish.”

Perhaps they’ll take over the world.

May he rest in peace.

“Netflix first won fans over back in November when it announced it was producing 10 new Arrested Development episodes for its streaming video service. Ultimately, it was a smart move for the streaming video company; the show, which ran for three seasons before prematurely getting yanked by the suits at Fox, has a strong cult following. Today, Netflix has confirmed the entire 10-episode fourth season will premiere on the same day, at the same time.”

Pretty sweet! Arrested Development is on my list of shows to watch.

“Burger King Japan is offering a promotion in which you can add 15 strips of bacon on your burger for a mere 110 Yen, or $1.24. Fifteen bacon strips are chump change for some porkophiles, though. In the video below, a dude attempts to chow down on a Whopper with 1,050 BACON STRIPS, or 70 15-strip upgrades.”

Thor (and/or) Loki Photo of the Day: 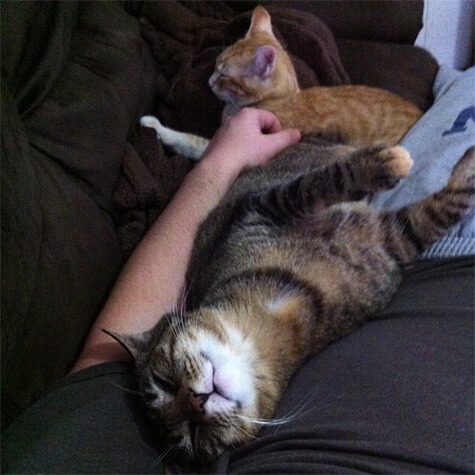 Linda Hoang is a Canadian blogger based in Edmonton, Alberta, who writes about travel, food lifestyle and pet topics. She's also a seasoned social media/digital strategist with a journalism background. Linda loves exploring the world with her husband Mike, eating their way through cities, supporting local businesses, and photographing Instagrammable Walls. She is the founder of the Edmonton International Cat Festival and a fur-mom to two cats and two dogs.
PrevPreviousClicks of the Day: Tuesday, April 17, 2012 Edition!
NextReview: The KegNext